Beijing's smog problem is becoming so bad that not only do people have to walk around wearing masks to try and be a little safer than walking through pollution, but citizens of one of the city cannot even view a natural sunrise. 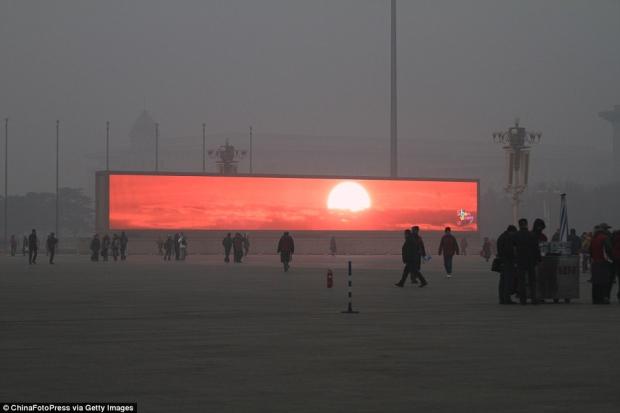 The Chinese capital has now placed massive digital commercial TVs across the city that display virtual sunrises... yes, virtual sunrises. Air pollution monitors have issued a severe air warning for both the elderly and school children to stay indoors until the quality improves. Beijing's commuters have resorted to wearing industrial strength face masks to get to work because of the intense smog.

Beijing's air quality is normally poor, but the readings for Thursday for particles of PM2.5 pollution are the first of the season to be above 500 micrograms per cubic meter. Mid Thursday morning, the density of PM2.5 was between 300-500, but the air started to clear toward the afternoon. The World Health Organization considers 25 micrograms safe, so these readings are around 26 times the WHOs safe limits.

This reading was the highest it has been since this time last year, and has the country worried. China has increased its regulations, as well as promising financial resources to curb pollution woes. Beijing's mayor has pledged to cut coal use by 2.6 million tonnes, and has put away $2.4 billion that will go toward improving air quality as part of Beijing's "all-out effort" on cutting down air pollution.

What should scare you, is that the WHO recommends a daily level of just 20, with a level above 300 considered as hazardous. The citizens of Beijing are having to walk through what the WHO considers hazardous, daily. With citizens not receiving natural light as most of us do, vitamin D levels will be down, and it will eventually cause health problems to skyrocket.

While Beijing might be attempting to solve air pollution problems, I doubt it can in the short term with most companies shifting manufacturing over to China, but what about citizens' health problems over the next couple of decades? What is China doing about that?