LSI has gained significant traction with their Nytro line of products, becoming one of the world's largest suppliers of PCIe flash cards in a very short time. In fact, they are already shipping into 6 of the top 10 Hyperscale companies. This success has given LSI a deep understanding of the market and the needs of their customers.

One of the fastest growing segments of the flash market are the value-oriented mainstream users. These users aren't in need of solutions with extreme performance specifications or ultimate endurance; they require a solution friendly to the bottom line. 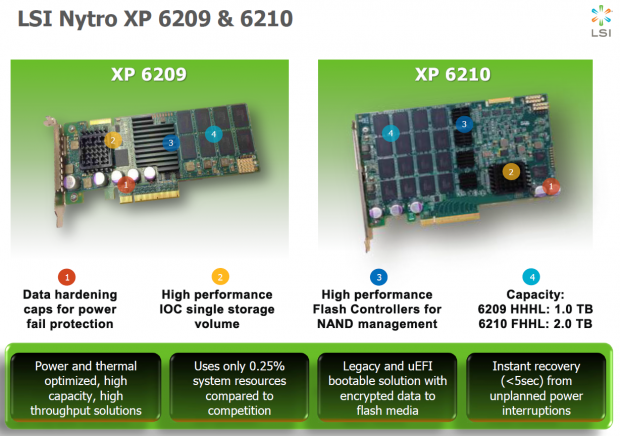 Hyperscale deployments require the most value per dollar, low power usage, scalability and the ability to extract value from their data as quickly as possible. The Nytro XP 6209 and 6210 are designed to meet the needs of the mainstream user. These cards both feature proven LSI SandForce controllers in tandem with the LSI 2308 Falcon SAS I/O controller.

Utilizing existing equipment with hardened drivers eases the integration into the server. LSI drivers are pre-installed in every major operating system, creating a slip-in solution. The addition of power-fail protection also provides an extra layer of protection from power loss.

The controllers feature power fail protection and large capacities (up to 2.0 TB) at a price point that many had previously considered unattainable for a PCIe solution. The 2 TB XP 6210 is priced under $2.50 per GB, accomplished through the use of MLC NAND. 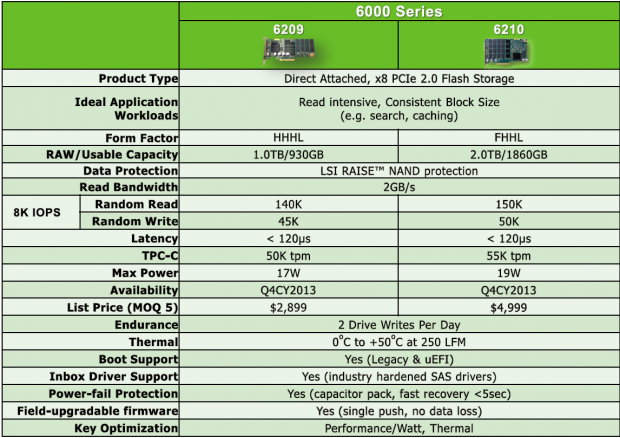 The 6209 will provide speeds of 140,000 Random Read IOPS and 45,000 random write IOPS with 1TB of flash. The 6210 takes this up a notch to 2 TB with 150,000 read IOPS and 50,000 random write IOPS. Both drives can handle 2 full DWPD (Drive Writes Per Day). This performance and endurance level gears the card for read-centric workloads. Much like the previous generations of Nytro WarpDrive products, the XP can be configured with extra over-provisioning to provide faster random write speed and boost endurance, at the sacrifice of some capacity. The easy-to-use utility provides a means of customizing the Nytro XP for its intended workload environment.

One of the primary drivers for flash solutions is the lower latency and enhanced throughput. Delivering this performance with a low power threshold is also important. The XP doesn't require auxiliary power, and draws a miserly 98 GB per Watt.