NVIDIA announced their "GeForce Experience" earlier this year, and have now released a beta that will allow the first 10,000 people to register to get their hands on it. After the signups have closed, NVIDIA will monitor the user feedback and take out any of the big bugs.

The GeForce Experience only supports 32 games at the moment, and just the Fermi- and Kepler-based NVIDIA GPUs. More games will be added to the supported list in the coming weeks. If you don't know what the GeForce Experience offers, it will help people who don't optimize their games for their specific hardware. Enthusiasts, like myself and I'm sure many others reading this, will sit there and optimize their graphics settings in their games to get the best performance, or quality.

Everyone is different - some people like a mix of medium/high graphics and a steady 60fps or 120fps minimum (that would be me). There are others who want the maximum eye candy, and will find no problem running at 30fps or lower. NVIDIA's software will help those who don't want to sit there adjusting sliders and settings, with the software eventually being capable of accessing NVIDIA's cloud-based supercomputers that will work out, and then download the best in-game settings for your particular PC. 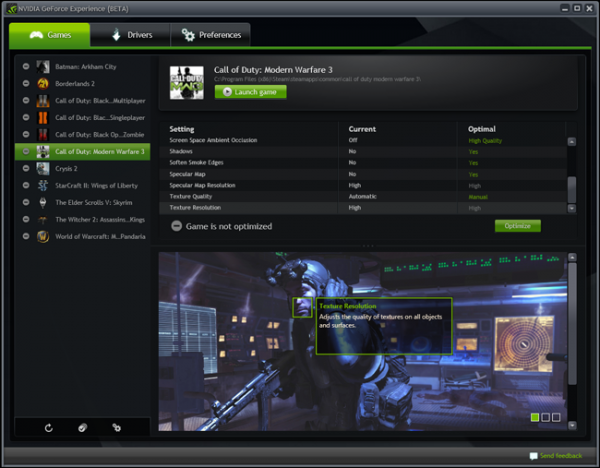 Not only will the software automatically configure your system, it will be capable of running driver updates automatically, by downloading them in the background and notifying you when they're ready to be installed.

NVIDIA have shown a six-step process that they use to test each game: