Computex 2012 - On Monday we got some short hands on with what ASUS are currently calling the Tablet-600. This is a system that is almost finished, but has yet to receive its final retail model name.

It's a system with a 10.-inch Super IPS+ panel with a 1366 x 768 resolution that supports up to an amazing 10 finger multi-touch. It was running the Windows RT Preview Release which if you weren't sure is essentially Windows 8 for ARM based processors, as opposed to regular Windows 8 that is for traditional x86 processors. 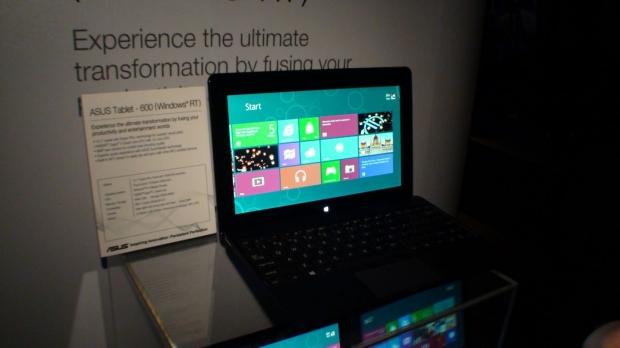 And on that note it brings us to the CPU and this job is given to NVIDIA with its Tegra 3 quad-core processor. As far as additional specs go, it comes with 2GB of RAM, 32GB eMMC storage, 802.11n, Bluetooth 4.0, rear 8MP auto focus LED flash camera and front 2MP camera. It also comes with enough sensors to ship a battle ship - G-Sensor, Light Sensor, Gyroscope, E-compass, NFC and GPS.

Check out our very quick hands-on video above when we checked it out during the ASUS Computex press conference on Monday. We will try to get back to ASUS to get a closer look at this thing as it looks pretty good on paper.