People are spending up big on Apple's Newsstand app, where a study of Apple's App Store for iPad during just the month of February from market research firm Distimo shows that the top 100 publications raked in more than $70,000 a day. This is just absolutely huge, considering that the revenue is from the United States alone, and is led by News Corp.'s The Daily, followed by The New York Times, and The New Yorker magazine. 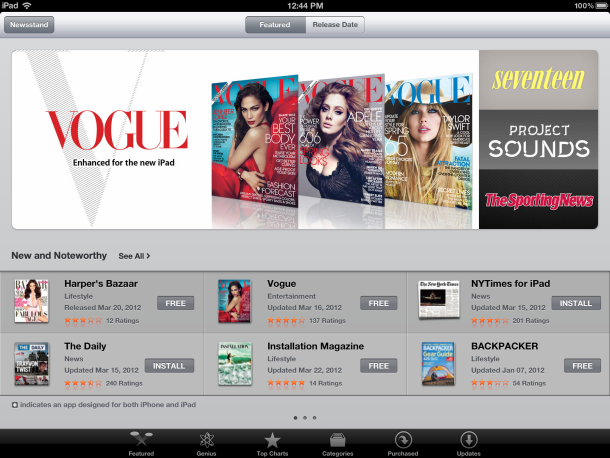 Apple don't disclose what individual app makers and content providers earn on ints store, but Apple provide 70-percent of each sale to the content creators, holding back 30-percent for themselves. Publishers can also let existing subscribers view digital editions of content, to which they've already subscribed to. But, they're not allowed to link to outside Web sites where subscriptions can be struck outside of Apple's App Store, that's a naughty no-no.

Some noteworthy metrics from the study:

The U.S. is still the top-grossing country, when it comes to iPad app spending. It is trailed by Australia, Canada, and the United Kingdom.