All NewsBusiness, Financial & LegalCases, Cooling & PSUContests & GiveawaysCPU, APU & ChipsetsDealsDisplays & ProjectorsGamingMotherboardsScience, Space & RoboticsStorageVideo CardsVirtual & Augmented Reality
All ReviewsAll ArticlesAudio, Sound & SpeakersCases, Cooling & PSUCPUs, Chipsets & SoCsComputer SystemsDisplays & ProjectorsGamingMotherboardsNetworkingPeripheralsStorageVideo Cards
GuidesGamingAsk the ExpertsNewsletterAboutForums
RTX 4090Windows 11Halo InfiniteBattlefield 2042Elon MuskGTA 6RTX 3080HDMI 2.1
Video Cards
We don't see as many video card partners these days including full version games to give the icing on the cake; certainly not as much as we used to. So it's nice to see MSI deciding to do this :-

There's no doubt they've picked a real good'en to bundle with their new R5970 and R5870 series cards, being named Game of the Year by the New York Times and getting a big thumbs up from game reviewers everywhere. Nearly all of MSI's video cards in their lineup are non-reference in one form or another, be it superior coolers, factory overclocks or higher grade components for better stability, and in some models a mixture of all. 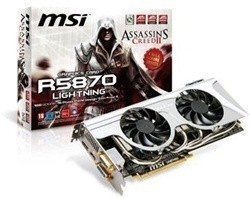 So, a good choice of game, good mix-up of cards in their lineup and hopefully good pricing should have MSI seeing their inventories cleared at a more rapid rate hereon. Keep an eye out for the boxes on the shelf that show Ezio (the star of Assassin's Creed) glaring at you.