All NewsBusiness, Financial & LegalCases, Cooling & PSUContests & GiveawaysCPU, APU & ChipsetsDealsDisplays & ProjectorsGamingMotherboardsScience, Space & RoboticsStorageVideo CardsVirtual & Augmented Reality
All ReviewsAll ArticlesAudio, Sound & SpeakersCases, Cooling & PSUCPUs, Chipsets & SoCsComputer SystemsDisplays & ProjectorsGamingMotherboardsNetworkingPeripheralsStorageVideo Cards
GuidesGamingAsk the ExpertsNewsletterAboutForums
Halo InfiniteBattlefield 6Elon MuskGTA 6RTX 3080RTX 3070HDMI 2.1Bitcoin Mining
Tweaking & Overclocking
Last night I was playing around with Intel's new Lynnfield and wanted to see what I might be able to get out of it. I was not looking to spend a ton of time but wanted to see what the fastest stable overclock on air I was able to get.

So I hooked up my trusty ASRock P55 Deluxe that we reviewed with the Lynnfield and dropped the Core i5 750 into it. I also had an 8GB kit of Corsair Memory that I was testing (expect a review of it shortly)so I dropped that in as well. To get things off the ground I went straight to the OC Tweaker page and hit the EZ OC settings. I selected 4200MHz and let the board set everything up. I rebooted and was off and running at 4.2GHz no problem.

Restarting the system I headed right back into the BIOS. From there I pushed the BClK up to 215 MHz and made sure Turbo was enabled for that 21x Multiplier. From there I was able to hit the login screen but after entering the password I got an immediate blue screen. It looked like 4.5GHz was out of the question. From there I started working backwards. I ended up with a very healthy 210 BLCK at a 21 Multiplier. The Corsair memory was humming along at 1686MHz with timings of 8-8-8-24 1T. At this speed some of my tests started crashing so I backed the memory off a slower 1264MHZ but I was able to drop the latency to 7.

From there I was able to put up a 32M SuperPi score that ranks w8th in the world for the Core i5 750 on the ASRock board. Not too terribly bad for spending around 20 minutes to see what this little chip could do.

In short the Core i5 750 is quite the impressive CPU, the removal of the extra memory channel and Hyper-Threading makes it very overclockable and a threat to AMD's low end CPUs. Up till now AMD has been able to hold price and overclockability over Intel's head. Well it looks like that is in danger of coming to an end. 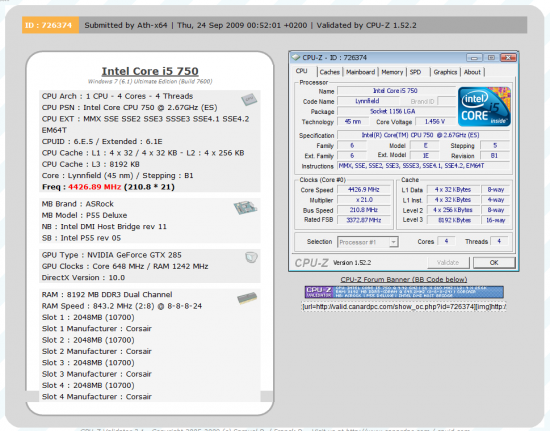