The horrible offenders known as cammers (they are horrible not for recording the film but for the awful quality) would be tracked by the use of a spread spectrum watermark (sort of like echo location) that would allow investigators to ID their seat to within 44cm. This margin of error will still lead to false positives and also brings up the issue of how to tell who is in that seat.

Several methods for knowing the "person in the seat" have been postulated each one more absurd than the last. One is to require each moviegoer to have assigned seats and collect personal information (name, address, etc.) before hand.

While this move might catch a couple of cammers it will end up alienating more and more legitimate moviegoers. Good job guys. On the bright side it will reduce the number of horrible movie files flooding the internet. 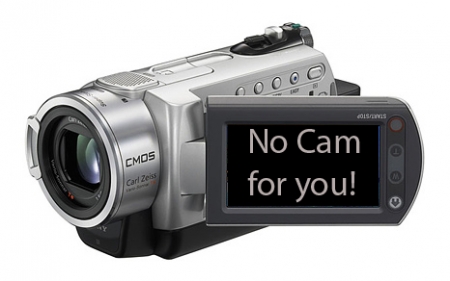 With one of the latest inventions by Prof. Babaguchi and colleagues, catching cammers might become even easier. While video-based watermarks are already used in theaters in order to determine which screen the movie was recorded from, new technology makes it possible to watermark the audio of films too.

The audio watermarks go much further though, as they can pinpoint almost the exact location that the pirate was in when he recorded the movie. This so called spread-spectrum audio watermarking does not spoil the subjective acoustic quality and is fairly accurate in estimating where the offender was seated.

With a mean estimation error of only 44 centimeters, it might be a seat off every now and then, but those are worries for later. To use the technology successfully, however, the theater has to keep a database with info on the identity and seating position of each member of the public so the offenders can be handed over to the police afterwards.