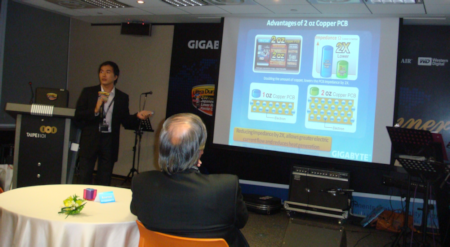 (Click to enlarge)
Yesterday TweakTown was exclusively invited to the GIGABYTE HQ to get a closer hands-on look at what UD3 is all about and well ahead of the rest of the media crowd who are gathered here. 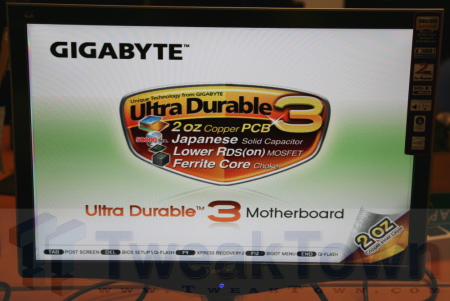 (Click to enlarge)
Yesterday, after looking at the final revision of the GA-X58-Extreme motherboard, we got onto UD3. A couple years ago GIGABYTE introduced Ultra Durable and that included all solid capacitor designs with high quality parts from Japan. Ultra Durable 2 introduced lower RDS MOSFETs, ferrite core choke and lower ESR solid capacitors among other things, including improvements to the cooling setups. 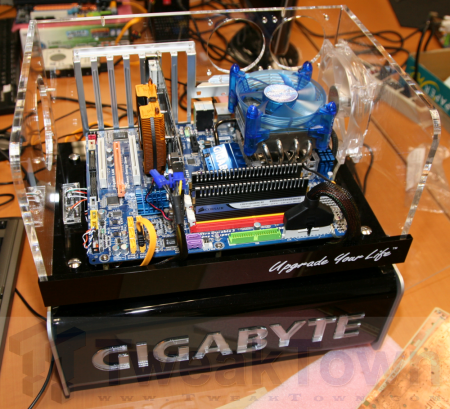 (Click to enlarge)
Ultra Durable 3 goes one step further again on improving GIGABYTE's line of motherboards by further introducing the use of even better Japanese capacitors that are said to last for 50,000 hours (almost 6 years of continuous use) and the big deal of the day, two ounce copper layers to the PCB. All motherboard PCBs have at least one copper layer, but on the vast majority out there, they are usually only one ounce thick. GIGABYTE claim to be the industry's first consumer desktop motherboard designer to feature two ounces of copper for both power and ground layers. 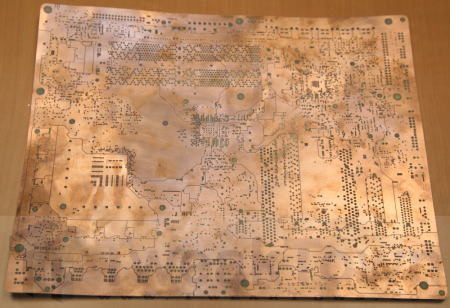 (Click to enlarge)
What is so exciting about that, though? A few things actually - let's try and explain them one by one.

Probably most important of all is that GIGABYTE reckons UD3 is able to decrease motherboard temperature by up to 50 degrees Celsius in the hottest areas of the motherboard - i.e. MOSFETs around the CPU. The claim was that the temperature in this area dropped from 178c to 125c, using a heat detecting machine. The thicker copper allows for greater electrical current flow, which in turn allows the circuits to produce less resistance (or impedance) by two times. Not only is there a clear advantage in temperatures, but boards using UD3 should use less power and suffer less from vdroop and voltage loss leaks. Of course, because it operates cooler, it should also provide more overclocking headroom and stability.

Another thing to keep in mind and this is purely for hardcore overclockers, due to the employment of the extra copper, UD3 boards will be less flexible and that's a good thing. Some overclockers use big and heavy copper LN2 cup pots and sometimes they do create an amount of flex on the boards - UD3 while not designed intentionally for this purpose, manages to solve much of this type of buckling and bending in those situations. 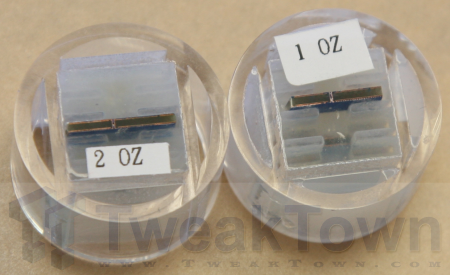 (Click to enlarge)
Luckily for us, GIGABYTE had a fancy USB microscope camera on hand for us (thanks Charles!) to compare the thickness of one ounce and two ounce copper layer PCBs on a couple magnified glass demos of the new cut out PCBs - that is them above. From the following pictures below, you can clearly see the difference in thickness. 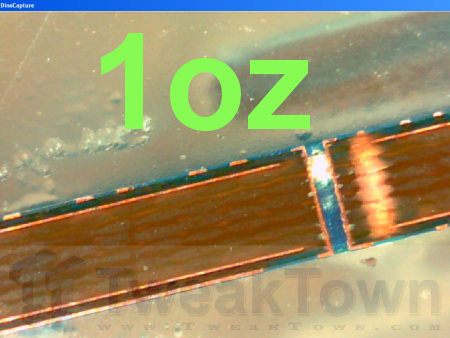 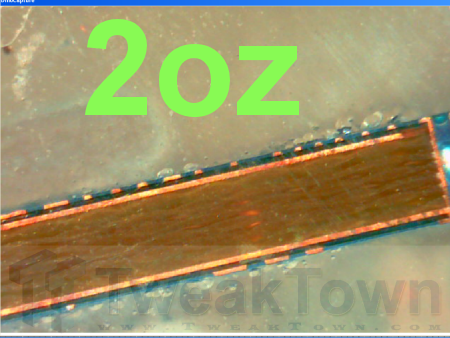 (Click to enlarge - 2 ounce)
We also got an exclusive look at an upcoming P45 motherboard that will begin selling in 2 - 3 weeks that uses UD3 technology. Not only does it get the thicker copper PCB treatment, but also a new cooling setup that looks great and matches perfectly with the PCB color scheme. Why has it taken you so long to add a blue cooler, GIGABYTE? Anyway... more of it please! 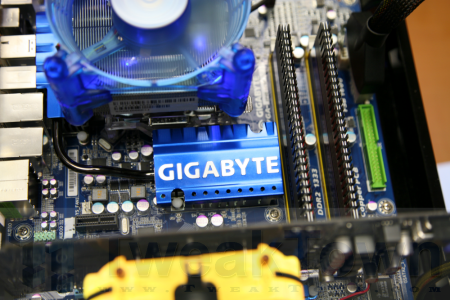 (Click to enlarge)
Below you can see a comparison between the typical one ounce copper PCB layer on top and two ounce PCB layer on the bottom: 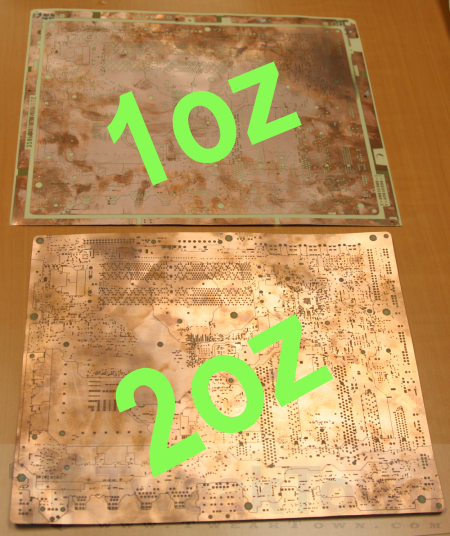 (Click to enlarge)
Of course we'll need to test one of these UD3 motherboards soon before we can make any final judgments but one thing is for sure, you can bet our temperature gun will be getting a good work out in that review.

We'll see what else we can dig up at the GIGABYTE 2008 GO OC overclocking event tomorrow.