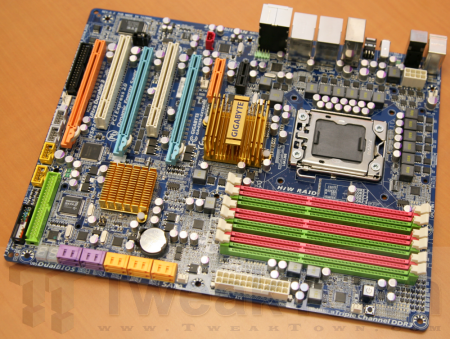 GIGABYTE's Extreme new line of motherboards are designed purely for overclockers and the Taiwanese company is hoping its X58 Extreme will power as many Nehalem processors as possible against its main competitors such as ASUS and MSI. We already showed you an early version of this board about a month ago, but that was non-final, and actually based on a DS4 design. 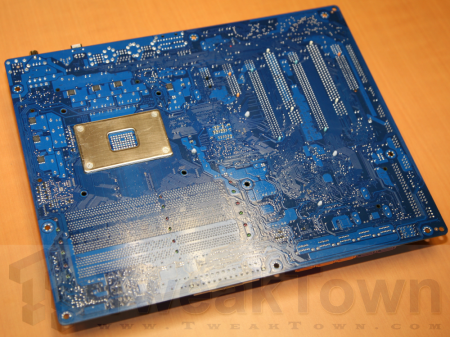 (Click to enlarge image)
Today we got a close up look at the final design that will ship to customers, besides the heatsink cooling setup, which GIGABYTE is still keeping under wraps for the moment - and this one is an actual working live sample. Besides the physical changes to the board layout, on this board and others, GIGABYTE will be introducing "Ultra Durable 3". GIGABYTE has already tweaked their boards to what we thought was the max and we really thought there wasn't much more left to improve, but we were wrong.

UD3 adds two 2 ounce copper layers to the 12-layer PCB motherboard - one is a ground layer and the other is a power layer. We got a chance to see the actual copper layers that slot into the regular PCB compared to normal one ounce copper layers, but we are not allowed to show you until the actual launch tomorrow. These thicker copper layers create less resistance (impedance) by up to two times, creating better electrical current flow according to GIGABYTE. In their labs, engineers measured a 50 degree Celsius drop in temperature in the hottest parts of the motherboard (mosfets around the CPU).

(Click to enlarge image)
On to the layout changes, you can see that from the first revision we saw, GIGABYTE has angled ALL SATA ports at 90 degrees - this is of big importance due to the monster graphics cards on the market. 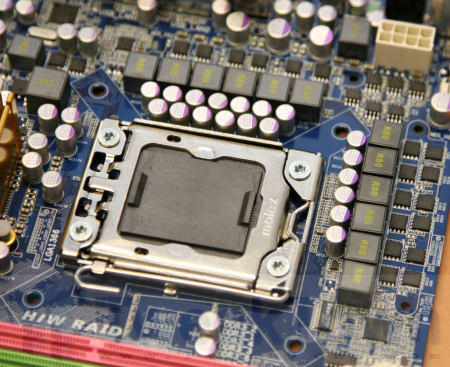 (Click to enlarge image)
X58 Extreme will get a total of 12 power phases for the CPU and two each for RAM and the Northbridge. The original board you saw only had six CPU power phases. 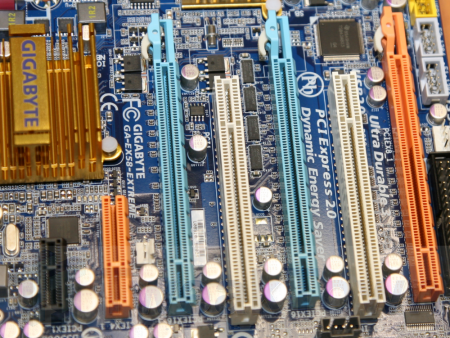 (Click to enlarge image)
The expansion slots have also been tweaked - instead of having four PCI-E x16 slots bunched so closely to each other, one has been removed and they've been spaced out. This was done to allow for three dual slot cooled graphics cards to fit onto the motherboard. The top two blue slots are electronically 16 lanes and the last orange one is 8 lanes electronically. The top black slot is x1 and the small orange one is x4. You also get two PCI slots for legacy devices. Nothing was mentioned about SLI on this visit.

GIGABYTE acknowledged that overclockers want as many power pin headers on their motherboards as possible because these users will plug in as many fans as possible. Previous motherboards from GIGABYTE only had four pin headers, but the X58 Extreme gets a grand total of six. 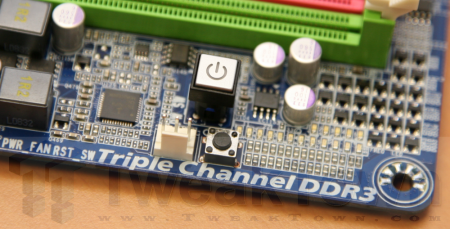 (Click to enlarge image)
The onboard power and reset buttons have had their location changed to the north of the motherboard, since where they were located was a little too "busy". Additionally, now every major component has debugging LEDs - there are stacks of them on the board, making it easy for you to work out which part of the motherboard is playing up. The rear I/O panel goes unchanged.

(Click to enlarge image)
It was interesting to note that the non-final heatsinks you see on this board were plenty enough to keep the chipsets cool whilst in load operation. We asked one of the engineers about the temperature and thinking that the chips would probably get rather hot, the engineer said not really. Whack on a whopping big heatpipe cooler on and we think it will definitely run super cool - perfect for overclocking.

We can't wait to see what their motherboard is capable of in the overclocking department but we'll all have to wait another month or so yet to find out. We should see the final cooling setup for the X58 Xtreme either tomorrow night at the UD3 launch or on Thursday at the GIGABYTE GO OC overclocking event.