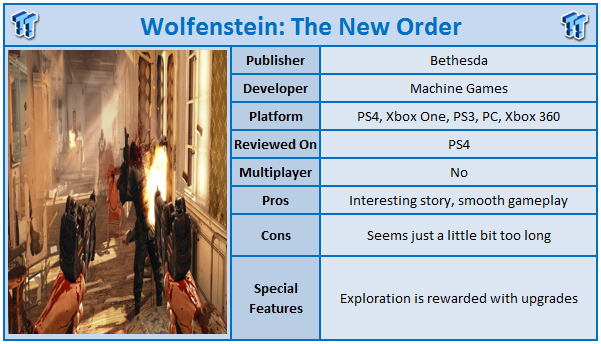 There are going to be two camps of people that play this game. Those who remember the original from their 386 or 486 systems and feel a huge sense of nostalgia, and those who have only seen the more recent, inferior Wolfenstein games. Wolfenstein 3D is a game that defined a generation. It was the game where Carmack and his team cracked the first person shooter and really... the rest is history.

It is also a series that has been returned to numerous times since its original outing in both multiplayer and single player experiences - all so far inferior to the original, but this time around it might be different. Wolfenstein: The New Order (TNO) is the surprise of the year so far. It's interesting, it's challenging and unlike some first person shooter franchises, it has brains and a decent story.

Like in the original, you play as BJ Blackowicz, a US marine sent behind enemy lines to take out enemy combatants and try to win the war for the Americans. In this alternate history version of the game, BJ is taken out and wakes up from a coma fourteen years after the end of World War II. The German war machine has won and the world is controlled by that regime. Small pockets of resistance exist and it is here that BJ meets a young female named Anya committed to helping BJ destroy the German war machine, and give the resistance the boost it needs to regain control of England, and then eventually the world.

TNO is in many aspects a typical first person shooter. The aim is to get from point A to B shooting as many things as possible and keeping BJ alive. However, it is when you look beyond this and see how the game is presented that you start to see why this is such a success of a game. First of all, the developers took some facets from the very original game and implemented them into TNO.

For example, when you gain health, you can move into an overdrive mode where health will slowly deplete and the game mode names also make a return. Who could forget 'I am death incarnate' and yes the game is as brutally hard in this mode as it was back then. There is also the ability to dual wield weapons just like in the original game and whilst this is more of a gimmick than perhaps intended, it's nice to see Wolfenstein go back to its roots.

That said, the developers also introduced some of the things you expect to see in a modern shooter. Health regenerates to a point (though you do not regain all of it without health pickups), and you can gain enemy weaponry and technology. At first, the implementation of this seems flawed. Every time you want to pick up ammunition, you need to press a button (square on PS4), which in the early levels can leave you depleted without ammo, but once you become accustomed to this, it for some reason makes sense.

It makes you search out ammunition and think about your strategy. Instead of just mowing down enemies, you need to take into account whether you have enough ammo to do so, and whether the ammo drop from that particular enemy will be good enough to replete your stocks.

This leads us into the combat. This is not an easy game, even on the lowest difficulty level. It is not a game where you can blast your way to victory. Strategy must be employed, especially when the mini boss characters, featured throughout, come raining on your parade. The combat also contains the ability to take enemies out via stealth.

This is actually a very useful aspect as in some areas in the game there are characters that will sound alarms if startled. Take those enemies out via stealth and you won't have to deal with hordes of enemies. In fact, the implementation of stealth in this game is one of the best we have seen in a first person shooter - especially one that makes such a big deal out of having huge amount of guns on offer.

There are also some sections of the game which contain no combat and instead build the story. At first, this seemed a bit out of place, but as the story progresses and you become more involved, it makes sense. There are a lot of segments where BJ and friends chat to provide updates to you as the player about what is going on. It seems like in an action first person shooter that this just wouldn't make sense, but it works.

An example is that there is a mission in the resistance base where you have to gain power tools for a non-player character to build a weapon. This involves you as BJ trying to track down these weapons, which may seem boring, but considering the back story that is filled in by papers scattered about the place, it is almost essential to the story.

There are also some basic puzzles to solve and the game really does not hold your hand at all. For example, to gain access to a map, you need to find it within each section of the game. Exploring is rewarded with BJ also able to find armor and weapon upgrades scattered about the place.

However, where TNO succeeds most is the feeling it gives you as you play - this is a game that is fun! It is a game that does not take itself too seriously and the storyline to be honest gets absolutely bonkers, but all the time you feel like pushing on to see what new missions will be offered up next. Every so often when the shooting is starting to get a bit boring, the game completely mixes it up.

You may take over a vehicle to take down enemies, you might be thrust into a stealth mission or thrown under the sea to explore - variety is not lacking in TNO and the game is all the more better for it. It is these areas that somewhat reboot the game and gives you a few more missions of enjoyment before the next reboot happens. It keeps it fresh right until the credits roll.

Visually TNO is impressive, although some may look at their PS4 system and expect more. One thing that TNO does do is maintain frame rate. Not once when playing did we notice a frame rate slowdown, and given how much action is on screen during any one time, this is quite a feat. Character faces are highly detailed and BJ is the best he has ever looked. The missions on offer sometimes take place in wide open expanses, and considering the frame rate also does not drop here, it's even more impressive.

The cut scenes that display the story (of which there are many) are also highly detailed and play out in a film style manner. These are impressive and really do keep you invested in the story that is taking place. On the sound side of things, the voice acting is done well, especially the German accents and the soundtrack is presented in a cinematic format.

Wolfenstein: The New Order is likely to be remembered as one of the surprise of the year come the end of 2014. From a game with hardly any hype, and a publisher not really pushing this game hard at all, a huge surprise has been had and this really is one of the first games on the new-generation consoles that could be seen as a must play.

It's a thinking man's shooter with a strong storyline, tough but fair gameplay, and enough variety to keep you coming back until the credits roll. We came in with zero expectations and ended up being completely surprised by this game, in of course, a good way.

PRICING: You can find Wolfenstein: The New Order PS4 for sale below. The prices listed are valid at the time of writing but can change at any time. Click the link to see the very latest pricing for the best deal.