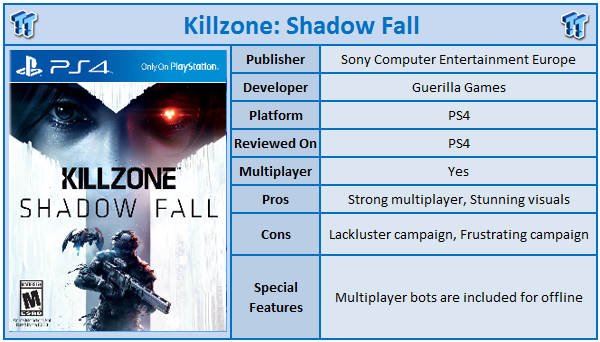 Killzone has been an interesting franchise for Sony and has very much been a mixed bag. The infamy began during the PS3 unveil at E3 where Sony showed what clearly was a complete farce in terms of the visuals of the PS3 Killzone, and so it became true once the system and the game finally shipped a few years later.

So again here we are, a new console launch and a brand new Killzone game, although there has been some signs that this time it would be different. The PS4 is clearly a capable PC to hit what Guerilla has always wanted in visual fidelity and this is also the fourth Killzone game, surely they couldn't get it wrong this time, but in some ways they did.

Killzone: Shadow Fall tells the story of a Shadow Marshall (who you play as) that witnesses their father's murder at the hands of the Helghast forces during the early part of the game. A VSA warrior takes Lucas under his wing and trains him up to the highest levels of the military.

After the bloody war at the end of Killzone 3, the Helghast are granted refugee status in the VSA held lands, but must stay behind a wall. With the Helghast constantly trying to escape and overthrow the VSA, it is up to you to go behind enemy lines and infiltrate the enemy. However, as is generally the case, all is not what it seems with this tale of war. 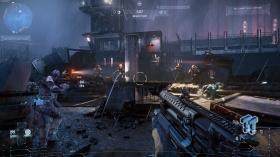 As you would expect, Killzone: Shadow Fall is a first person shooter with a few puzzle elements thrown in to mix up the gameplay. If you have played a Killzone game in the past, all you are really gaining by moving to the PS4 system and this game is increased visual fidelity, but considering that Killzone has in many cases always been a showcase for the power of the systems on offer, this is of no surprise.

The game is set over nine chapters of varying length, but one of the most puzzling things about the game is that the first two missions are some of the poorest in the game and some of the most frustrating. Killzone: Shadow Fall is a game that clearly prides itself on wide open areas for combat, but in the early game, this is actually detrimental to the experience, with the game failing to in many cases tell you exactly where to go next. We found ourselves stumbling about trying to find non-existent checkpoints and there is some back tracking to be had as well, which is something that Killzone has not been known for in the past.

Once you get past those first two chapters though, the game begins to actually tighten up in gameplay and so it is very much worth getting through it. The puzzles throughout the game generally have you picking up an object and placing it into a slot to unlock doors or open new areas to explore. And this is where Killzone Shadow begins to show its problems.

The puzzles are not varied, and by the end of the game, you will start to detest them - especially when the game is throwing two attack spiders, and missiles directly at you whilst trying to solve them. It just becomes a frustrating experience. 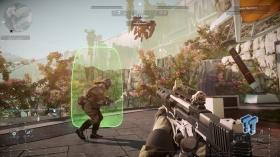 And the rest of the game doesn't change too much either. It's of no surprise that the main aim is to shoot as many guys as you can, but one area where the game does excel is giving you choice. Each area generally gives you the opportunity to tackle the situation in varied ways.

Having watched a few streams of this game to see how other players are handling the combat, it is clear that not many people will play Shadow Fall in the same way. If the game is feeling tough and unfair, it's usually a case that you just haven't considered a different way to approach the situation, as opposed to the AI being cheap. That is actually a feather in Killzone's cap.

The main problem we have with the game is that the campaign really is a bit non-sensical and also not that interesting to play through. We found ourselves pushing through the campaign just to get to the end (to be able to write this review), as opposed to actually enjoying what was on offer. And that is probably because Shadow Fall feels too much like its predecessors. It is fair to expect that going into a first person shooter that the gameplay could be fairly generic and seen before, but when it mimics as much as it does of its prequels, it disappoints like Shadow Fall does.

As mentioned earlier, the game does have some lush, open environments that the combat takes place in. Keeping the navigation issues aside, it really is a sandpit for you to play in and take on the tasks in the way you wish to do so. From the open vistas of the forest style missions through to tight confined areas on spaceships, Killzone does have a wide variety in the locations for the gameplay. 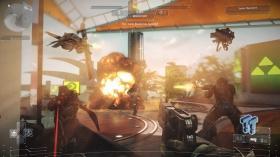 This means it is no surprise that the graphics are some of the most impressive seen in a console game to date. This is the game you buy to show off the PS4, to see what the machine is capable of at this early stage of its life. One thing we noticed is that in the tighter areas like corridors, the graphics fidelity increases significantly, but drops (although not to a poor level) when in wider, outdoor locations.

This does allow the game to keep a constant frame rate aside from a very minute number of locations remains rock solid. It has a 1080p resolution when used on the right television and really is gorgeous. It is the best looking PS4 game in the launch line up by a wide margin. 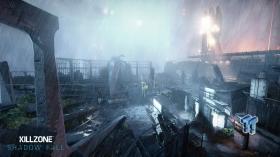 Where you will find some good gaming is the multiplayer side of the game. Typically with a first person shooter, they will include a number of modes (and Killzone does, and quite a few to boot), but you will have to choose a specific server for each mode to play them. This generally leads to games not being played on every game type. Killzone: Shadow Fall fixes this by including all game modes in a round system.

For example, if you include all modes on the server you run (or join), then it will cycle through each game type every couple of minutes changing up the gameplay and keeping it fresh. The multiplayer side also has bots which is interesting especially as this is the first Killzone you need to pay to play online (via PSPlus).

However, other than that, Killzone: Shadow Fall is a typical launch game that shouldn't have been. This is now the fourth game in the series (and that is not counting the VITA and PSP variants) and to have such a generic game and story is disappointing to say the least. With the history of the series, it seems that it should be pushing the franchise further than it has. Given it's a launch game, it is impressive in the state that it is in, but we really should be expecting to see more out of a game like this - and to be honest, so should you.