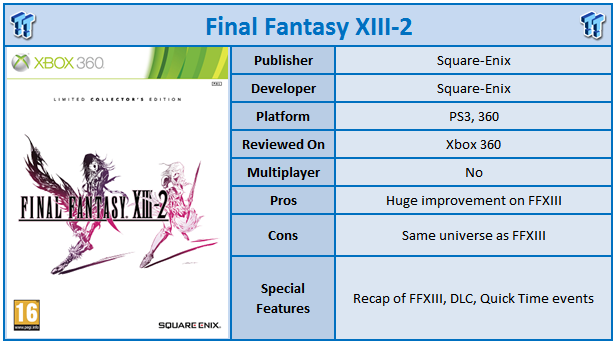 To say that Final Fantasy XIII was a disappointment to many people is an understatement. The first next generation Playstation poster boy game had one of the more turbulent developments from recent times and it seemed that in many ways the company struggled to adapt to the new HD era once the consoles were out. Final Fantasy XIII was on rails, took a long time to get going and forgot a lot of what has made Final Fantasy one of the most popular video game series in history. So Square-Enix did the only thing it could do, go back to the drawing board and try again. This time, they may have just got it right.

Final Fantasy XIII-2 (FFXIII-2) picks up three years after the events of Final Fantasy XIII. Lightning, the main protagonist of the original game is feared dead and her sister Sereh is left to fend for herself and try to find out what happened to lightning. Noel is a character from the future who was sent back to assist Sereh restore the world to its former glory and ensure a world changing event does not happen in Sereh's future. He also knows where Lightning is and so the two set off on the main adventure with different wants, but one main goal.

FFXIII-2 for the most part is very much like the original game. It's not as open world as previous Final Fantasy's, but to say that its 'on rails' would be unfair to how much effort Square Enix has put into opening the game world. There is a strong focus on time travel with each area you visit in the game set in a different period of time and as you would expect a key facet of this is being able to stop events before they occur and to try and change the path of time. This is one of FFXIII-2's successes. Seeing the world at different times of history show how the universe the game is set in changes and adapts and it offers freshness to the game that we did not see in the original title. 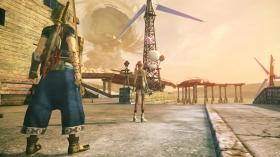 One thing that did surprise us is that many of the previous games characters have been dumped and don't make an appearance and in some ways the links back to the original game are flimsy at best. It is entirely possible to go into FFXIII-2 without playing FFXIII or reading anything about it, and somewhat understand what is going on. With that said, Square Enix has included an area with information about what happened in the original game. It's a real shame the main cut scenes from FFXIII were not included however.

The main quest of the game is supplemented by a number of side quests that can be completed to gain new items and weapons. This offers more variety and offers a nice diversion every so often from the main quest. There is also an easy mode this time around allowing those who don't necessarily want a challenge to focus on the story. In many ways FFXIII-2 reminds us of an MMO structure where you have a number of different areas you can visit, but there is more to that comparison than various areas to traverse.

One of the key elements of FFXIII has been retained. Characters can be assigned paradigms during anytime of battle and you need to focus on various factors in each battle to determine which paradigms should be used at which time. The MMO comparison comes from there is clear roles from each paradigm; tank, DPS (damage per second) and healer. All three are present and offer pros and cons in each battle. There will be times you need to select each type and battles can be won and lost on each decision adding a strategic element. This was one of the better improvements to FFXIII.

There are a few new specific facets of the battle system in FFXIII-2. First of all you can if you are quick enough out run random enemies which present themselves in the world and the second change is that there are many quick time events during the boss fights. Whether this is an improvement is up in the air, but it does give some freshness to long battles against boss characters. There are also some new puzzles you need to get past which unlock areas 'hidden' in the time worlds. These are fairly straight forward to complete and don't really add that much to the game.

Aside from this, everything has been maintained from the previous title, including the crysterium levelling up system. Instead of just levelling up, you need to select which paradigm you want to level up and this allows you to either build hybrid spec characters and not be a specialist in any area, or focus in one area and build a very strong character. Both options seem to be viable in battle.

Visually the game in most cases is strong. However there are a few points where the frame rate did noticeably drop and the videos themselves are of less quality in terms of depth than the previous game. This may be explained by the fact FFXIII-2 ships on one Xbox 360 DVD as opposed to the three of the previous game and in a way aside from cost we have to wonder why. It was a disadvantage to the 360 game over the PS3 game last time, but gamers probably would prefer more discs with better quality videos than a compromised experience. The voice acting in English can be grating, and if you can, get hold of a copy with the Japanese voice overs and English subtitles.

Whether you should play Final Fantasy XIII can come down to a few factors, but primarily the main question is, do you care about the Final Fantasy XIII universe enough to play another 30 odd hours? Square Enix has made huge improvements to the game since XIII and every one of them has been positive (such as auto saving and checkpoints), but perhaps another universe could have made the game better. However there is no doubt that the sour taste FFXIII left in most people's mouths could be cleaned with this game and Square Enix should be congratulated for realising something was wrong.