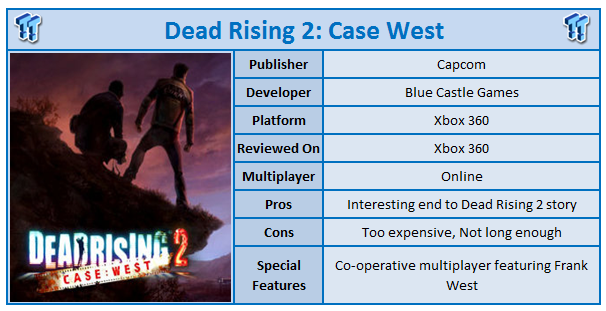 Dead Rising is a funny series. First released exclusively on the Xbox 360, many gamers and possibly even Capcom were unaware as to how successful the series would be. Last year Capcom released Case Zero for Xbox Live Arcade. This served as an introduction to the Dead Rising 2 universe and for five bucks gave you a few hours of good gaming. After the success of Dead Rising 2, Capcom announced they wanted to bring Frank West, the original protagonist, back, and so Case West was born; a game where the storylines of DR1 and DR2 meet. Again, it's on Xbox Live Arcade, but this time for ten bucks. We have mixed feelings about whether the extra five bucks is worth it or not.

Case West picks up right after the end of Dead Rising 2. Chuck has successfully left Fortune City and as well as this proven he was not responsible for the zombie outbreak which occurs in that game. However, Chuck is still not proven innocent. Since the events of the original game, Frank West has been trying to figure out more about the zombie invasion and more specifically, Zombrex, when he comes across someone internal at the Zombrex manufacturer who will provide information. It is up to Frank and Chuck to go to the facility and meet the source to get the information. 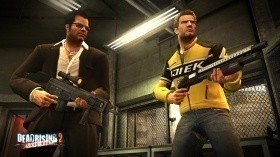 There are a few changes to note in Case West that could be a prelude to what Dead Rising 3 (if it exists) may contain. First of all, you still rescue survivors; however, without the help of your aide from Dead Rising 2, you are not radioed missions. Instead, you stumble across them.

Once you reach the survivors you are either sent on a quest (such as finding some body parts they require, or following a note they have left as to where they have gone), or the mission completes instantly. There is no taking survivors back to the safehouse; instead they seem to know where to go. This is a significant improvement to the series where you are no longer trying to baby sit survivors.

Also, Case West plays out over the course of one day instead of three. Due to this, there are only three main cases and most of those cases are very quickly played out. In Case West, more than any other Dead Rising game we found ourselves waiting around checking the time on Chucks watch. Even with the survivor missions you will be waiting around for a long period of time waiting for missions to start.

There are also not as many distractions at Fortune City as the size of the complex is significantly smaller. That said, there are new weapons to check out and new enemies which do mix the gameplay up some, but not enough.

The game itself is quite short as well. We were not expecting a Fortune City style game with huge levels and a lengthy campaign, but for ten bucks I think we can expect more than a three hour playthrough.


The game is also significantly easier than Dead Rising 2. Instead of starting at Level 0, you start at Level 40 and while some of the game does take this into account, you can take more of a beating than you could at the beginning of Dead Rising, and most fans will breeze through this game in one sitting.

The main point to Case West is of course the introduction of Frank West. In multiplayer co-operative mode you can choose to play as Frank, but not in the single player game. Given the focus on Frank as the reason for the downloadable game, this is a puzzling decision. It would be just as easy to have you control Frank and the AI control Chuck, as to what Capcom actually decided, which is the other way around.

The engine of the game is, as expected, that which was used for the Fortune City world, and many of the loading screens still display Fortune City. The graphics are around the same level and not that improved, but given Dead Rising 2 was quite good in the graphics department already, this is not a problem. The script and voice acting can be grating and some of the performances are not good, but in the end they are adequate and keep the game moving along.

Case West is an interesting title. You don't need Dead Rising 2 to play it despite the fact the opening five minutes contains a complete spoiler for the original game. You can come in fresh and play this game and some people who have found certain mechanics of Dead Rising unplayable in the past may find what they want in Dead Rising 2: Case West.

However, for ten bucks it is hard to recommend as the game is quite easy to complete and doesn't last long. Waiting around for missions is also an all too common annoyance in Case West. A real shame.