Two years ago, we received out first Lenovo Ideapad Y700-17 gaming notebook. Although it is common now, this system was one of the first with both 2.5" and M.2 storage provisions. The Y700 allowed us to unify the two form factors in our Notebook Battery Life test. 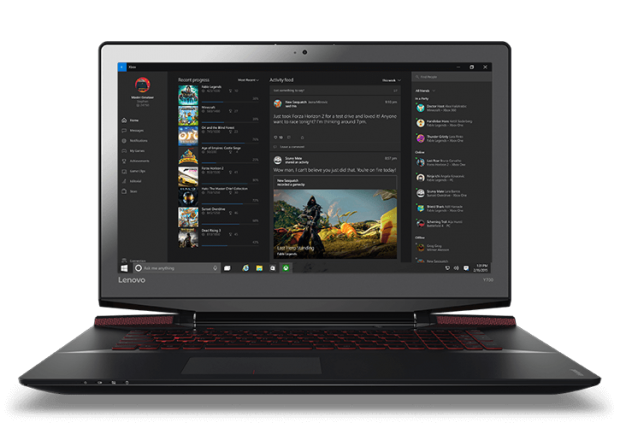 The test itself has also stayed the same over the past two years. The suite comes from BAPCo, MobileMark 2014 version 1.5, but the software is the same that you run on your PC at home. Software like Word, Excel, Outlook, Acrobat, and WinZip makes up the superior test that came to market in an age when battery life measurements were from playing movies or running a script that browsed websites. The MobileMark suite brought a realistic approach to notebook battery life testing.

It's time to retire the Ideapad Y700 and MobileMark 2014 v. 1.5. That doesn't mean the Notebook Battery Life storage test will drop off the list in storage reviews. We're working with Lenovo to find a modern platform with a more efficient 8th Generation Core processor and dual 2.5" and M.2 capabilities. BAPCo also just announced the new MobileMark 2018 with updated applications to pair with our new hardware. Before we move to the new platform and test, we will look back at two years of data and show what the best SSD is for notebook battery life. 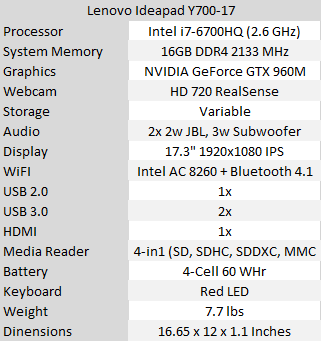 Lenovo discontinued the system in early 2018, but we still see them for sale from time to time. Prices have dropped significantly over time.

I purchased the first system for my son in 2016. The night before Christmas, I popped the cover to install the fastest storage available at the time. That's when I found the dual-drive configuration. That night I emailed Lenovo about getting several sample systems in to run our Notebook Battery Life test. The company would eventually send us four systems, and I would later buy another one for my other son a year later. Yes, there are six of these in our house at all times.

The reason why we plan to retire the Y700-17 platform is also what makes it the most expensive test we run. Taking the battery from 100% to 0% in just a few hours is destructive. This exact scenario kills batteries and reduces the amount of charge they can take. Each battery only lasts for a handful of tests before it loses the ability to charge to the same level as a new part. Lenovo has at least three battery suppliers and the one we chose to use for out test has become difficult to source. We have a small stockpile of new batteries but will run out of this exact battery in a few months.

The MobileMark 2014 v. 1.5 descriptions is simply, "MobileMark 2014 1.5 is an application based, battery life benchmark designed to assist users in making PC purchasing decisions."

The company built the software suite to test on different notebooks to compare results. We repurposed the suite to use to the same notebook to test different components to deliver equal environment results to determine what storage product delivers the best battery life. 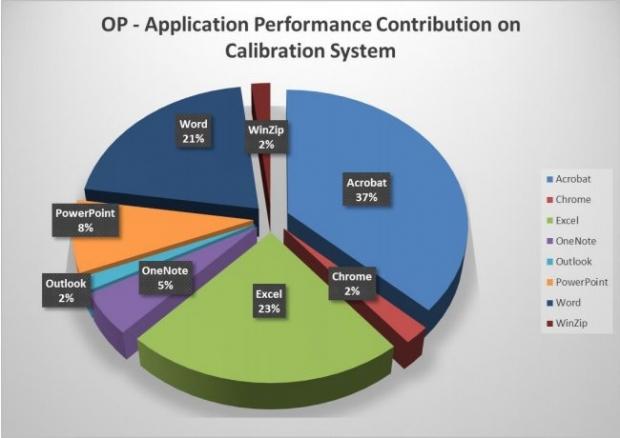 The application runs on a simple install of Windows 10 Pro. We install the MobileMark Suite and make a base run before recording the results with a small capacity SSD. Then we use Acronis True Image HD to make a one-to-one copy. We use the cloned image on each drive we test ensuring an equal environment for each result. 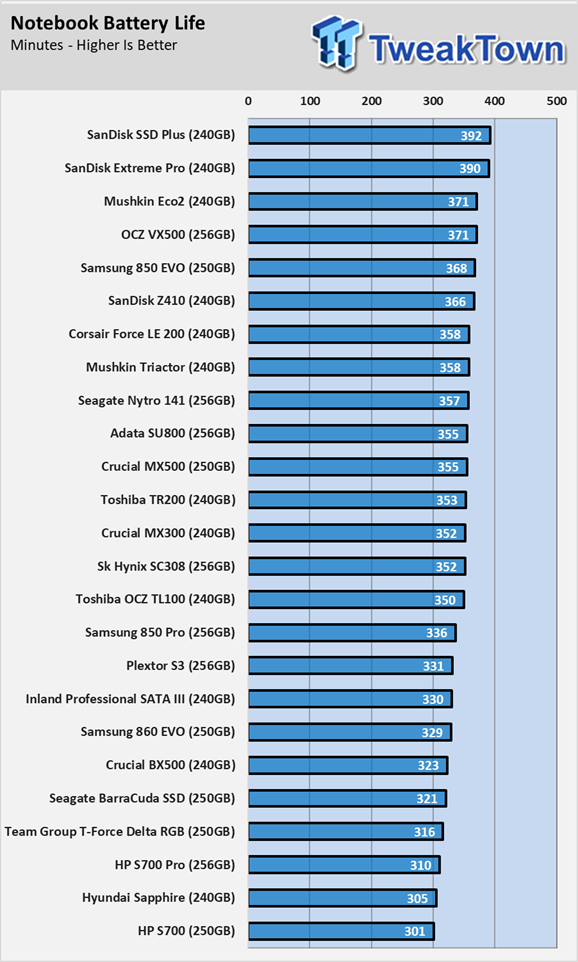 We start with the 256GB class drives, the smallest in our roundup today. The SanDisk SSD Plus 240GB takes the top spot with 392 minutes in our test. The Extreme Pro 240GB, also from SanDisk, trails by just two minutes.

The Samsung 850 EVO falls in the top five, but most of the best models for notebook performance are entry-level SSDs. 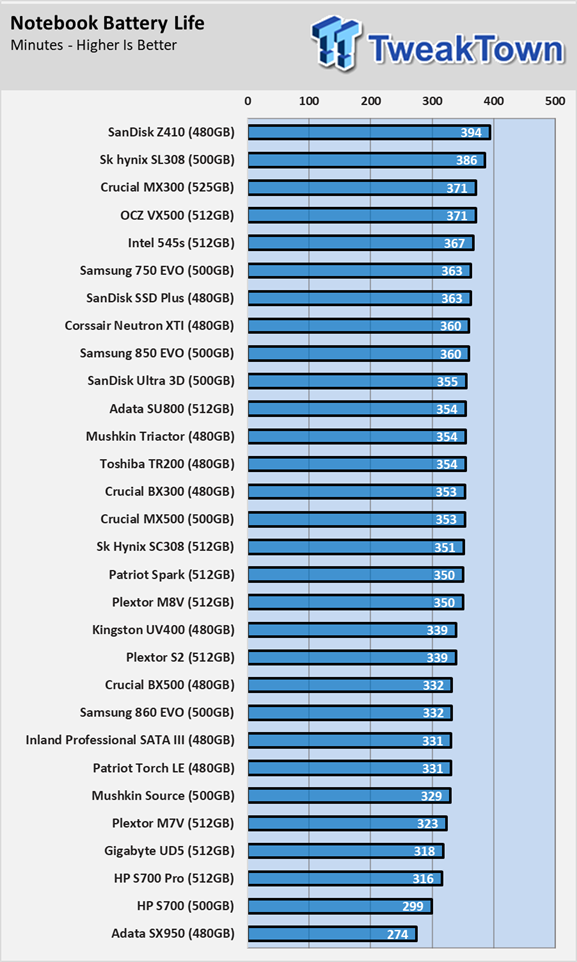 The first seven drives in the 512GB class SATA results were widely used by system builders in some form. Some shipped under a different name in the large OEM builder's systems. The system builders really drive the mobile optimizations. The drives built for the upgrade market are usually not optimized for mobile user the same way the OEM products are. 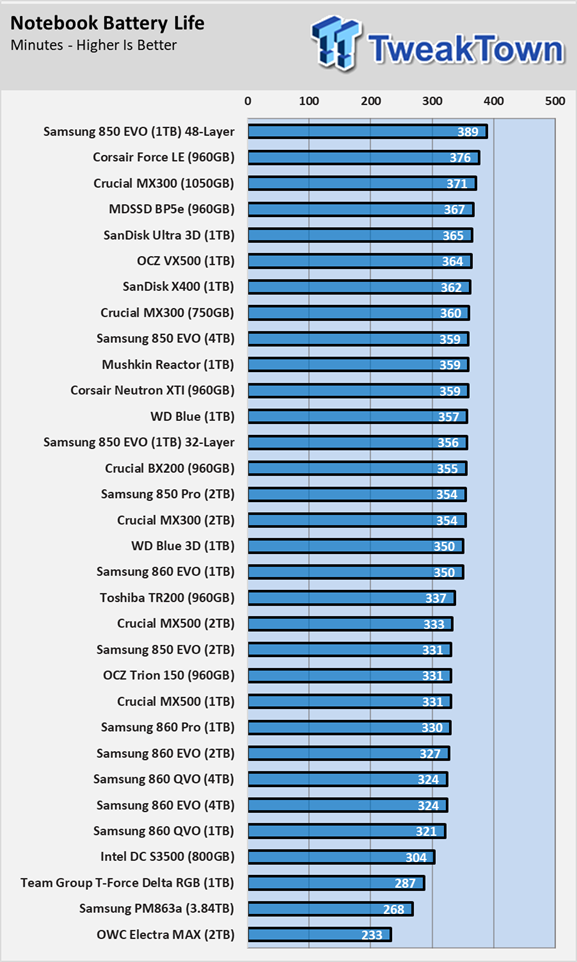 In the 1TB+ chart, we start to pick apart the Samsung 850 EVO with two models. The first is the 48-layer flash model that shipped after the 32-layer model. The trend of improving notebook battery life didn't continue with the 64-layer TLC 860 EVO. 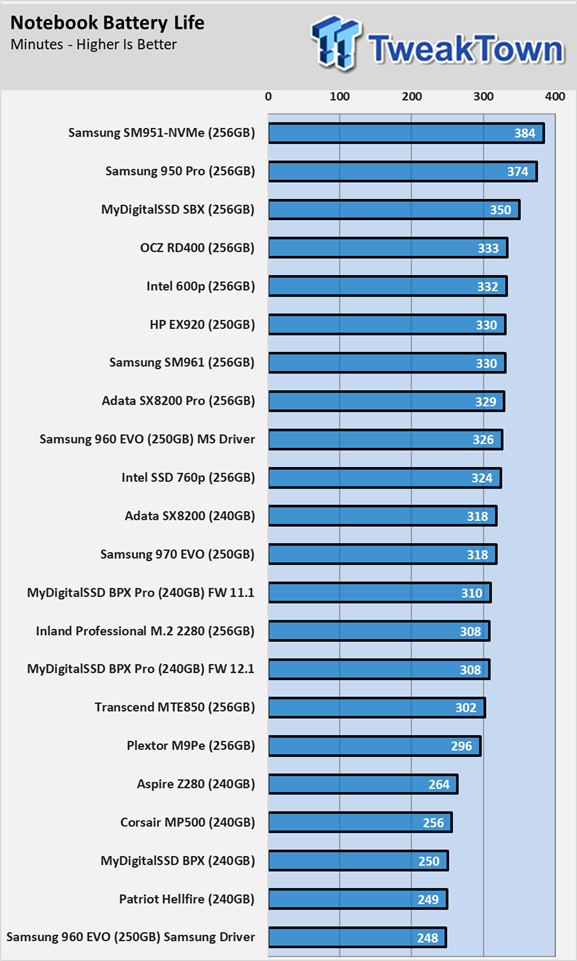 Moving over to PCI Express-based storage with the low latency NVMe protocol, we start to see the average battery-life decrease slightly. PCIe SSDs don't use DEVSLP like the SATA SSDs but use a different low-power mode called L1.2.

Again, we see an OEM model at the top of the chart, but the low-performance models don't dominate the NVMe battery life like many of the SATA charts on the previous page.

In this chart, we included the 250GB 960 EVO with both the Microsoft and Samsung custom NVMe driver. For the notebook battery life test, we only use the Microsoft driver in modern reviews because the custom drivers hurt performance in this test. 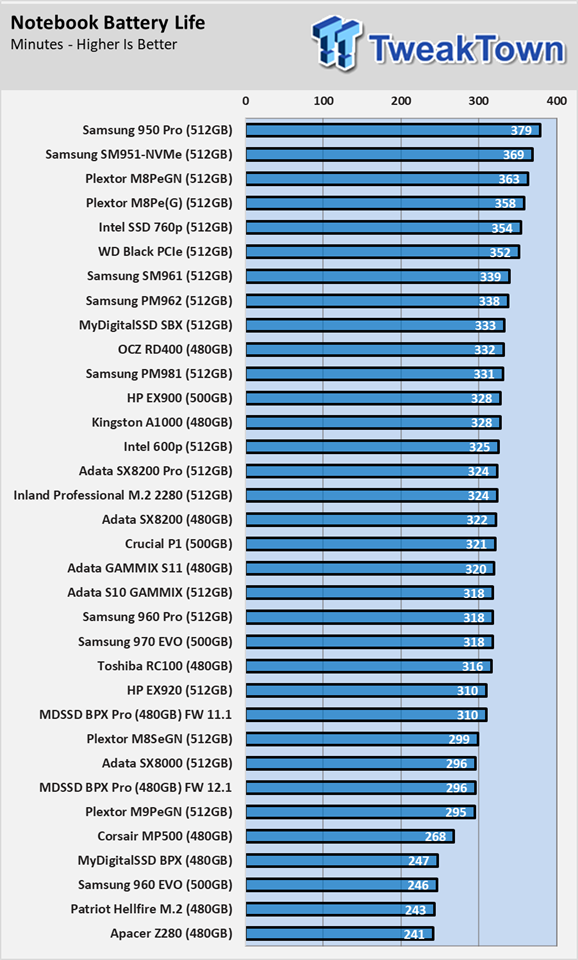 At this point, we can see that Samsung products usually score high on each chart, but not every drive from the company is at the top. There really isn't a pattern nor a dominant controller architecture, or flash generation. 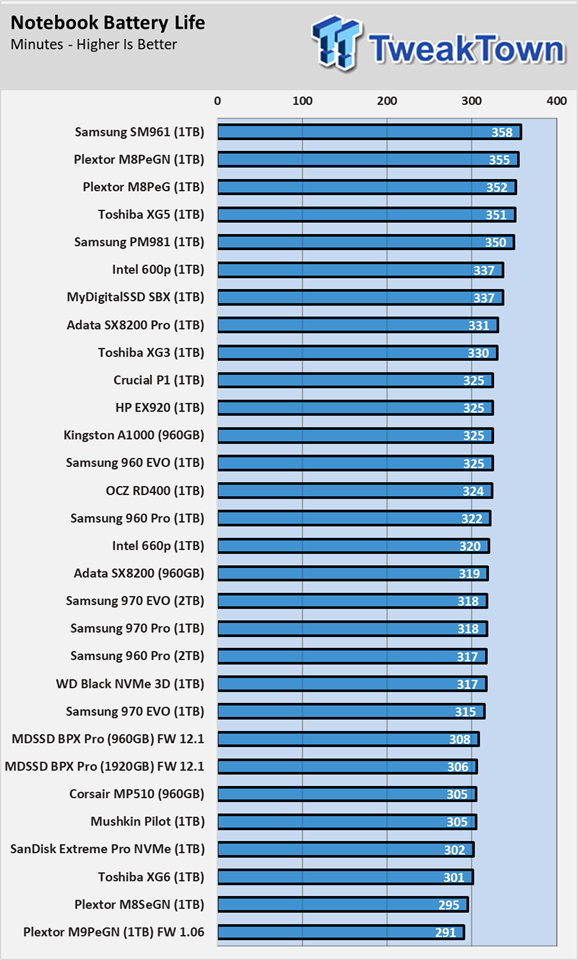 In some of the charts, we see the Plextor M8Pe series near the top. This series uses an early Marvell NVMe controller that we never saw as a low-power part. The drive also uses MLC flash, just like the SM961 1TB that sits at the top of this chart. MLC flash has been at or near the top in many of the charts.

The reason why is because one of the most power consuming tasks for SSDs is data management. SSD reviewers in simple 4-corner power measurements do often not test this, and that's why we prefer to take the long route and test actual notebook battery life. Data management usually draws as much power as a 4KB random write but can take several seconds to complete the task before allowing the drive to move back to a low power state.

As mentioned, we're closing in on the final days with the Lenovo Ideapad Y700-17 system and MobileMark 2014 v. 1.5. The combination served us well over the last two year, but it's time to move on with updated hardware and the latest software suite. We will continue to use this combination while ramping up the new combination and possibly overlapping tests for a short period.

Between the retail and reference design SSDs, we've tested over 200 in the last two years. The number only increases with the SSHD and hard disk drives, even though we've only tested a few with this combination.

We're excited to see what the new MobileMark (2018) brings. The software just arrived a few days ago, but it does add some new performance elements that will increase the amount of data we present in the review. Expect the updated coverage to start showing up in February or March with the new SSDs coming to market just after CES.