We recently looked at HP's high-performance Thunderbolt 3 portable SSD, the P800. With it, we learned the company like attaching the cable to the drive, so you never have to look for a cable to transfer your data. It's a great idea that we support, but sometimes you find that one connector doesn't work with a host system, or the overall size increase of an embedded cable becomes a burden. HP has a solution for that too. 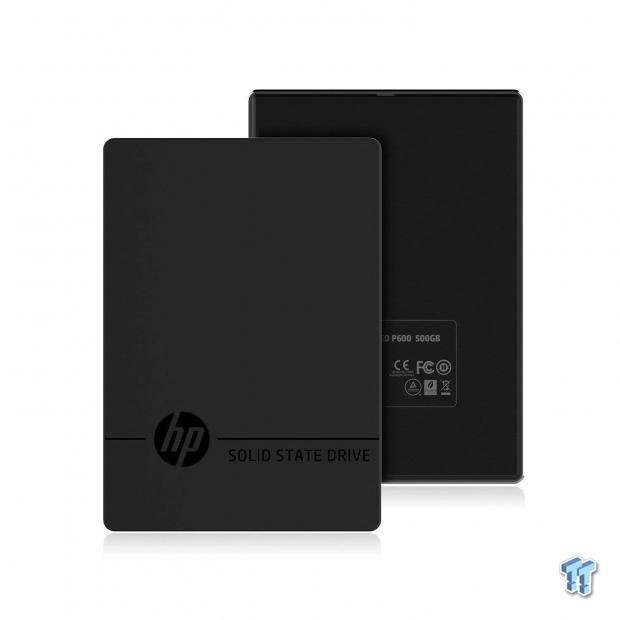 The HP Portable SSD P600 (P600 from here on out) is the USB drive for those looking for high-speed storage on the go. The drive costs less than the P800 and uses a different design that's fresh and innovative.

Most portable SSDs using the USB interface utilize SATA drives that limit the performance to the native speed of 6Gbps. SSD performance has long reached the interface limits of SATA so most products in this category perform about the same. Without performance as a big selling feature to distinguish one product from the next, companies like HP have searched for new avenues to stand out. We think HP found a way to do that without detracting from the core functions of the product.

HP brought the Portable SSD P600 to market in three capacities - 250GB, 500GB, and 1TB. The series features progressive performance that scales with the density. The 250GB model delivers up to 560 MB/s sequential read, a rating shared through the entire series. The sequential write for the smallest model is 490 MB/s. That increases to 490 MB/s for the 500GB model and increases another 10 MB/s to 500 MB/s sequential write for the 1TB model we're testing today.

HP is one of the few companies to release random performance data for portable storage. The series ranges from 80,000 to 90,000 read IOPS and 60,000 to 70,000 write IOPS. The performance comes from a MaxIO Technology controller paired with the 3D flash to deliver a long-lasting device.

HP supports this series with a 3-year warranty. We were not able to find any published endurance limits. This is common across the portable SSD industry since most data transferred to these products is sequential in nature and very easy on the flash as opposed to random data. 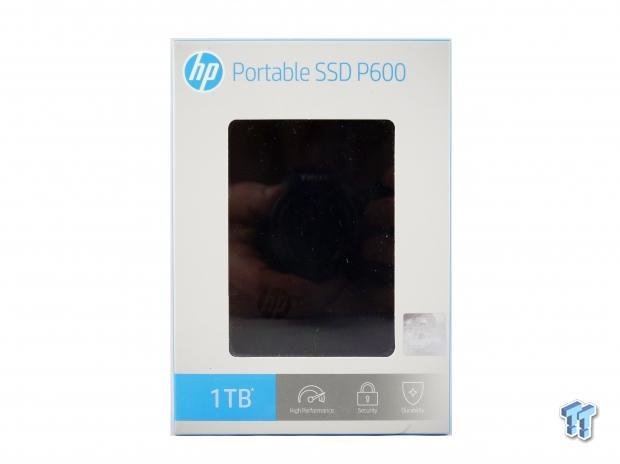 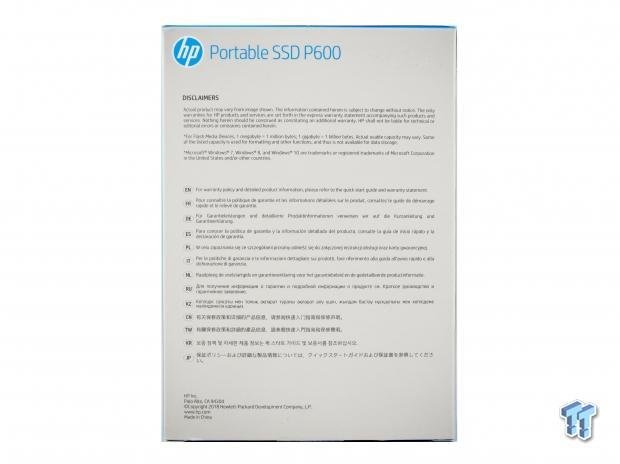 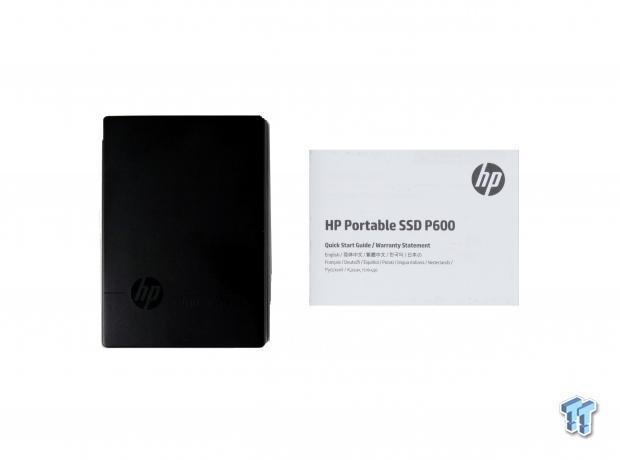 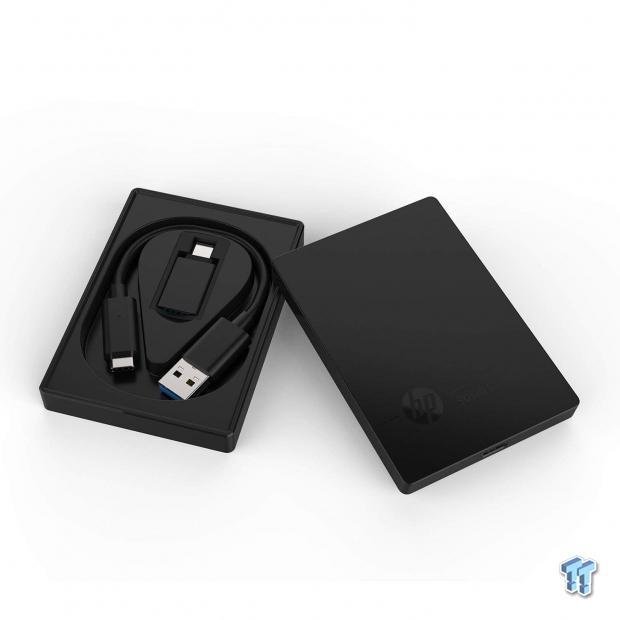 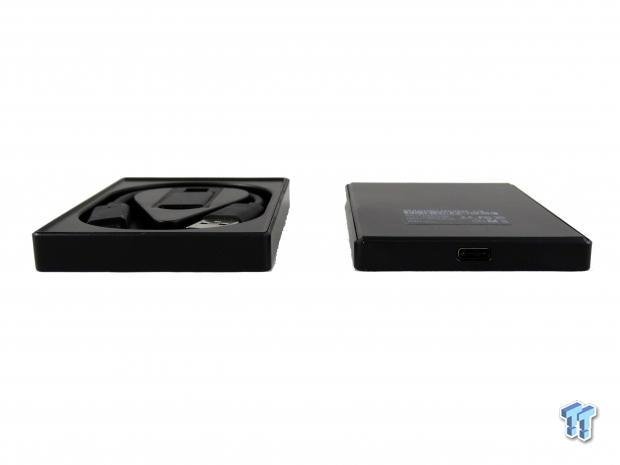 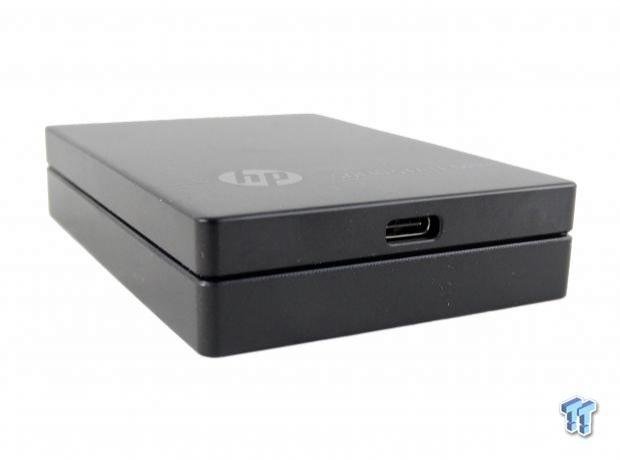 As we mentioned, the Portable SSD P600 features a unique design. There are two pieces to the kit. The first is the SSD with a USB Type-C connector. This part is thinner than the tray that holds the cable and Type-A to Type-C adapter. The two pieces come together with magnetic force and stay locked well. The ridge on the SSD helps to align the pieces, and the hidden magnets do the rest.

In our opinion, the weak link for this product is the short cable that will often leave you dangling the drive from the USB port on a desktop or notebook sitting on your lap. There really isn't much HP can do about the short cable since it has to fit in the case and be strong enough to support the weight of the drive. 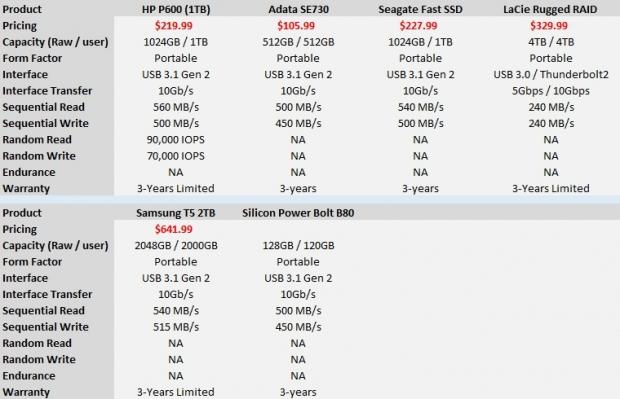 We've published a few portable SSDs in this layout with the same drives. The P600 SSD joins new to market portable SSDs from Silicon Power and Seagate.

The Samsung T5 is the best-selling portable SSD this year and performance stays roughly the same throughout the series regardless of the capacity. It's a constant in our testing as is he Adata SE730 and LaCie Rugged RAID, the only hard disk drive of the group.

Pricing was recorded at the time of writing using Amazon US. 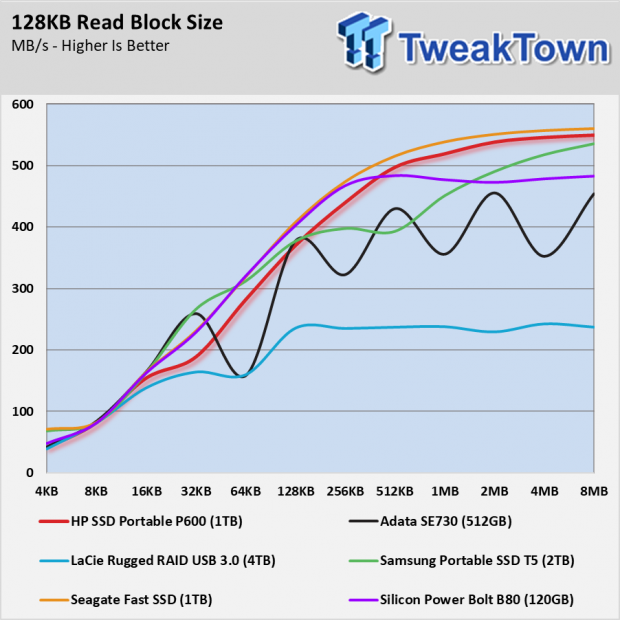 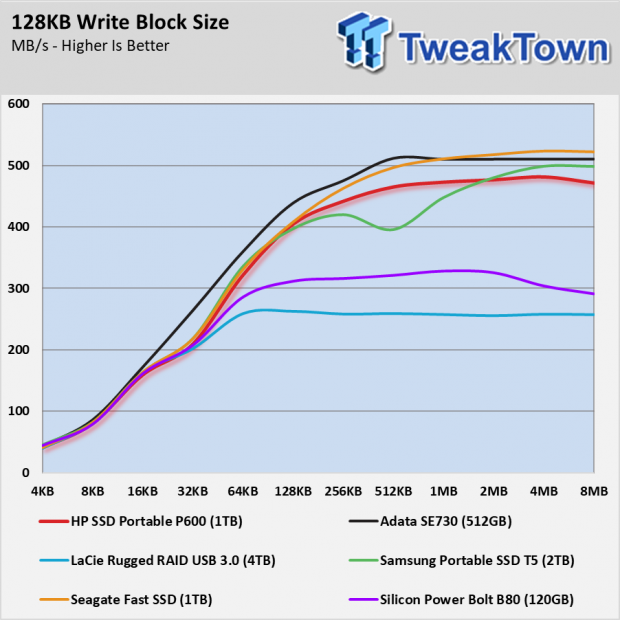 The 1TB P600 scores well in both the reading and writing tests where we increase the block size to measure performance across a wide range of data. It's not the absolute fastest drive, but it's right in the mix with the better drives shipping today and still using a SATA SSD in the enclosure. 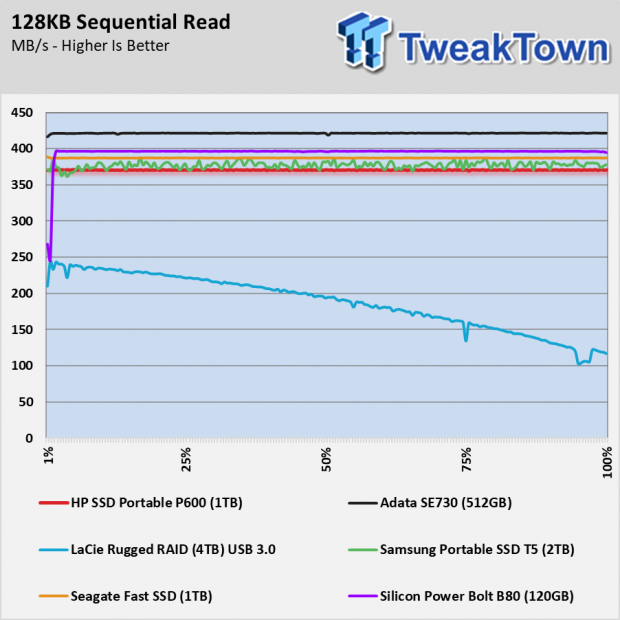 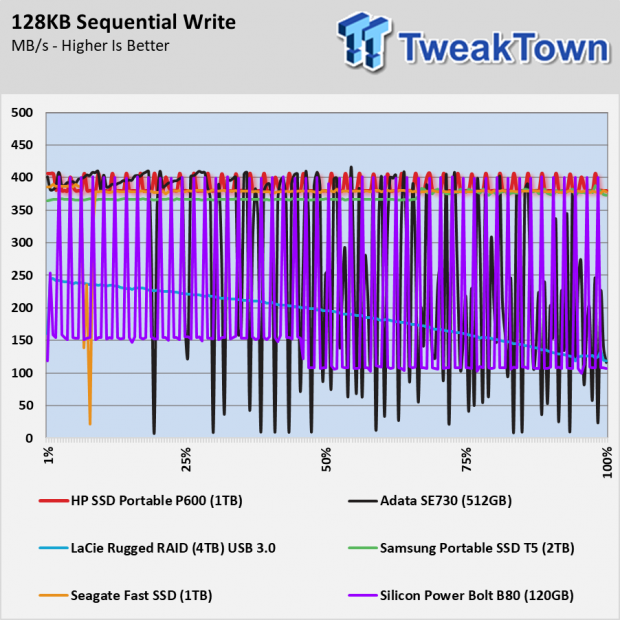 The 1TB P600 delivers consistent read performance using 128KB blocks when we read across the entire user area. We observed slightly more variation writing 128KB blocks to the drive but never encountered any severe dips like some of the other products on the write chart. The P600 should deliver strong performance in our real-world data transfers tests. 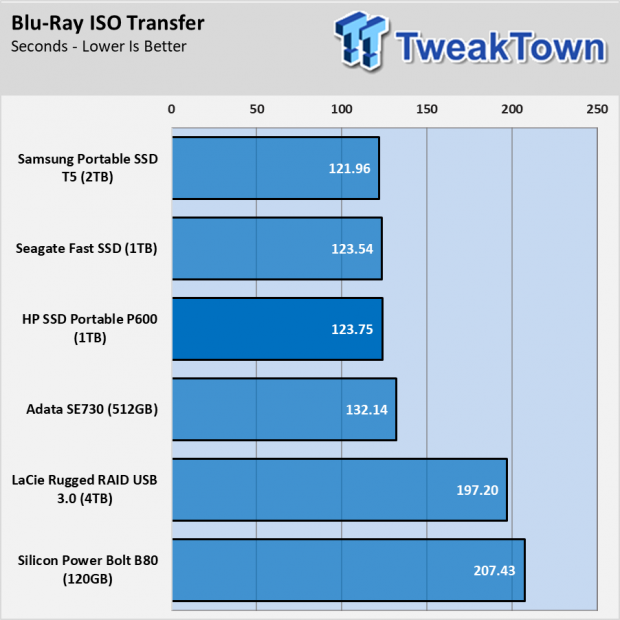 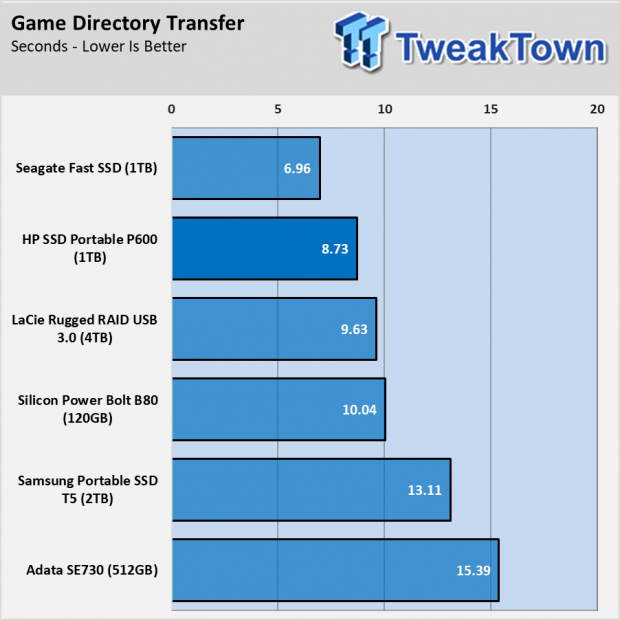 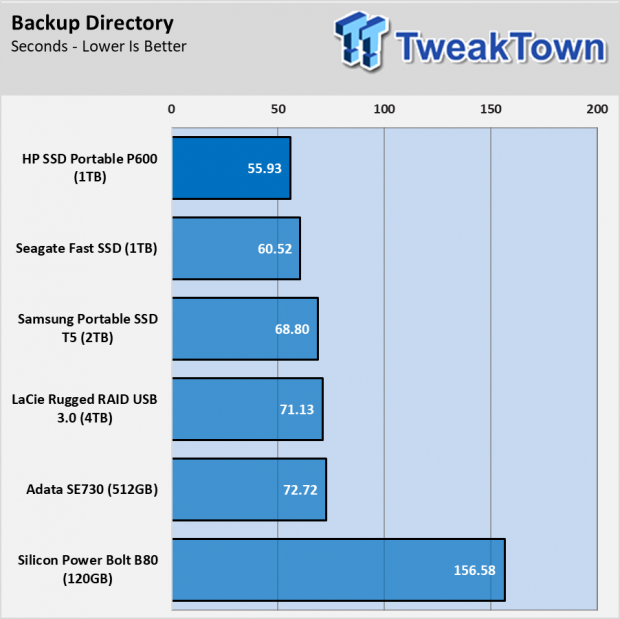 Moving our focus to transferring real data to the HP P600, we, in fact, see strong performance for this class of product. The 1TB drive scored near the top in two tests and at the top for the heaviest test that mixed small and large block size data (documents, pictures, videos, and other assorted files).

The HP Portable SSD P600's strongest feature is also it's biggest weakness. The drive itself is thin but when you add the undertray the thickness more than doubles. While it's possible to walk around with this drive in your pants pocket, it's more of a backpack, purse, or attaché portable SSD. You could use it like countless other portable SSDs, just the drive without the undertray and the cable loose in your pocket and not have to mess with the excess bulk. It's really more personal preference. 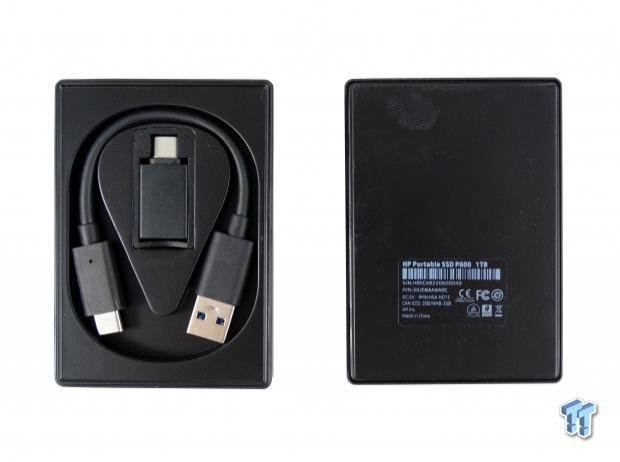 Performance wise, the 1TB P600 we tested is quick enough to satisfy nearly everyone. We didn't see any performance issues in our testing. The drive ripped through our real-world workloads that are very common for what people transfer to and from these devices. It would be difficult to get better performance out of a portable SSD using a SATA interface. There are models like the P800 using Thunderbolt 3, but the interface is far less common than USB.

Over the coming months, we should see more portable SSDs using NVMe internals bridged to USB, but they also have some compatibility issues with motherboards and devices that can't deliver enough power for them to operate correctly.

We feel HP priced the P600 well with prices starting at just $84.99 for the 250GB model. As you scale up the capacity range, the cost per gigabyte decreases. The 500GB at $135.99 is a strong buy, but the 1TB model at $219.99 is the best overall deal if you are willing to invest for it. With 1TB on tap, it's likely you will not run out of space and find yourself deleting files to fit what you need right away on the drive.