Someone at Crucial decided it's finally time to release a NVMe SSD. We first tested SSDs using the NVMe communication protocol more than three years ago when Intel brought the 750-Series to market. Since then, NVMe products have transitioned from ultra-high performance data crunching products worthy of workstation-level workloads, to what you should expect to find in a sub-$1000 PC at a big box store. 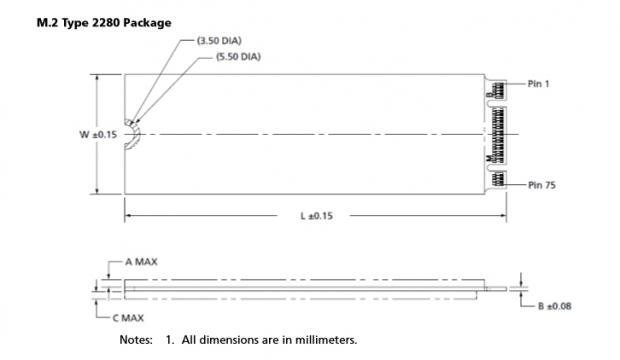 Crucial's conservative approach left the company out of the NVMe game when it was exciting, but the company plans to make up for it with designs using the latest technology. In this case, that means 4-bit per cell (QLC) memory.

Before we dive into the new Crucial P1 entry-level NVMe SSD, we want to discuss what that actually means.

The difference between low-cost, mainstream and premium SSDs has changed. Raw performance still plays a role, but the amount of data you can write to the drive at one time before it slows and endurance increase as you move up the pricing scale. Micron's 64-layer flash, both TLC and QLC, delivers strong random reads so general applications performance can be very similar between these classes. In some instances, as you will see today with the Crucial P1, the low-cost drive can actually be faster than products that cost more.

The low-cost drives, as a general rule, give users less endurance - the amount of data you can write to the drive before a failure. They also rely heavily on SLC cache to mask low write performance from the media. When you write more data than what the drive can cache, the performance drops off more.

The new P1 product line comes to market in three sizes starting with the 500GB. The 1TB model we're testing today, and the smaller 500GB, are the only two in the series to ship early in the release. A large 2TB model, the fastest in the series, will come later this year.

This series uses the Silicon Motion SM2263 4-channel, the cut-down version of the SM2262 8-channel controller used in a number of popular SSDs that shipped in 2018. We've tested the SM2263 controller before in the HP EX900 and Intel SSD 660p. The later, like the P1, uses 4-bit per cell "QLC" NAND flash memory.

We start with the 500GB in the pricing breakdown. This model currently sells for $109.99. That virtually doubles to $219.99 for the 1TB model, and we can only assume the 2TB drive will sell for somewhere close to $400 to $440 when it comes to market later this year. Crucial hasn't released the official price of the 2TB drive.

All three sizes carry a generous 5-year warranty but limited by written data. The industry calls this a TBW rating or terabytes written. The 500GB P1 warranty allows users to write up to 100 TBW and the rating doubles for each model to 200TBW and 400TBW as we move through the capacity range.

Crucial gives P1 owners access to Acronis TrueImage software used to clone your existing data to the new drive. The company also has a strong management software in Executive Suite that includes monitoring and firmware update capabilities. The software also has a DRAM-based cache feature that increases performance and lowers NAND flash wear when enabled. 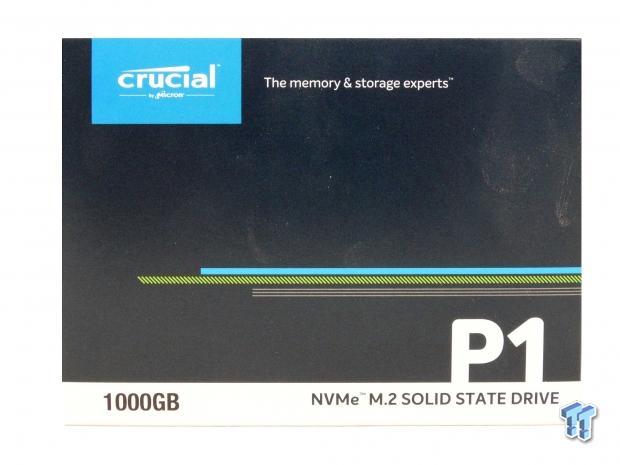 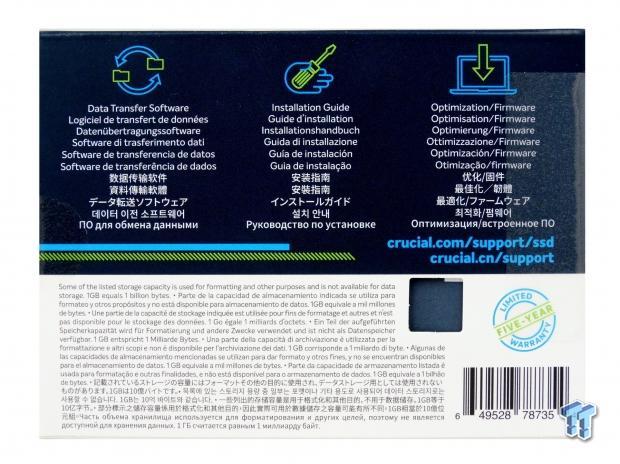 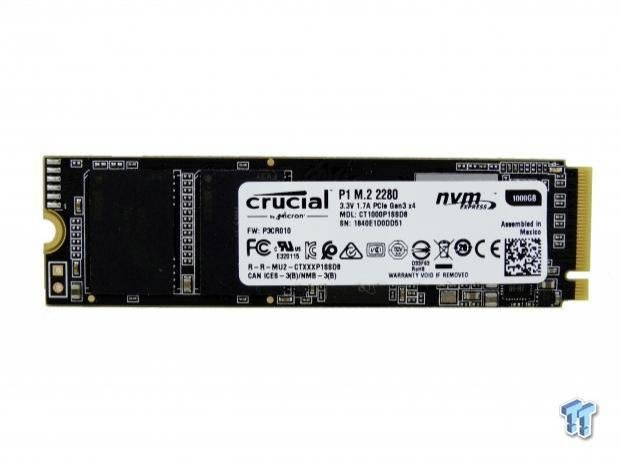 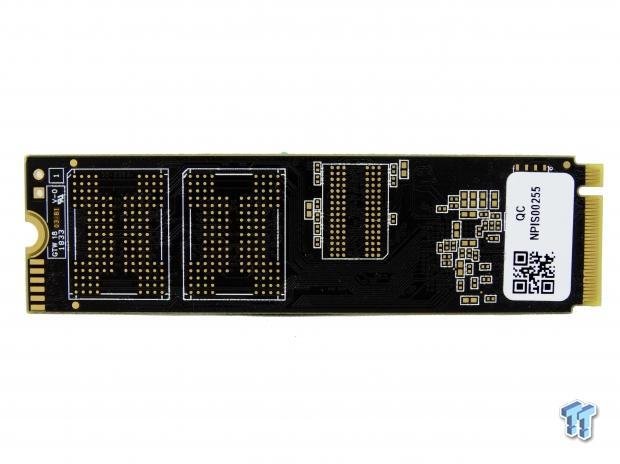 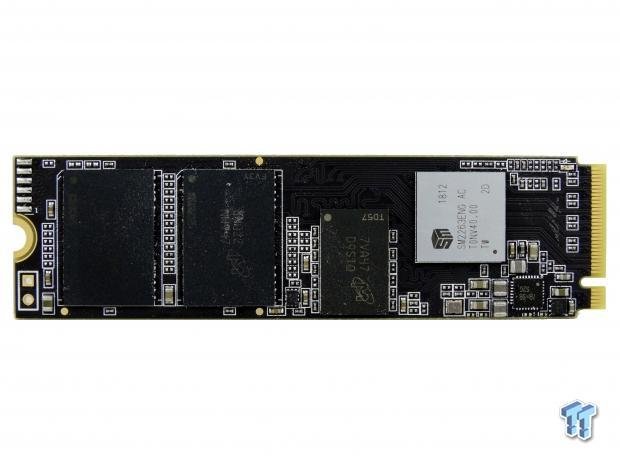 The 500GB and 1TB models feature a single-sided design while the larger 2TB model will utilize both sizes of the drive for components. If you are familiar with Crucial's SSDs, you might wonder where the host-power failure capacitors are. Crucial has reduced the hardware footprint of the capacitors by moving the advanced feature over to software. 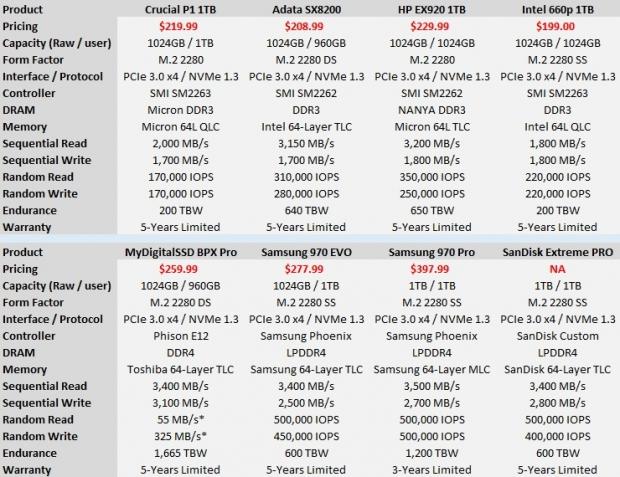 The obvious comparison for this review is the Intel SSD 660p, the only other retail SSD sporting QLC flash. The P1's $219.99 price puts it close to the Adata SX8200 and HP EX920, and that will factor into your decision to buy this product as the two SM2262 drives deliver ample performance and superior endurance. While writing this article the Adata SX8200 960GB actually cost $11 less than the new 1TB P1. 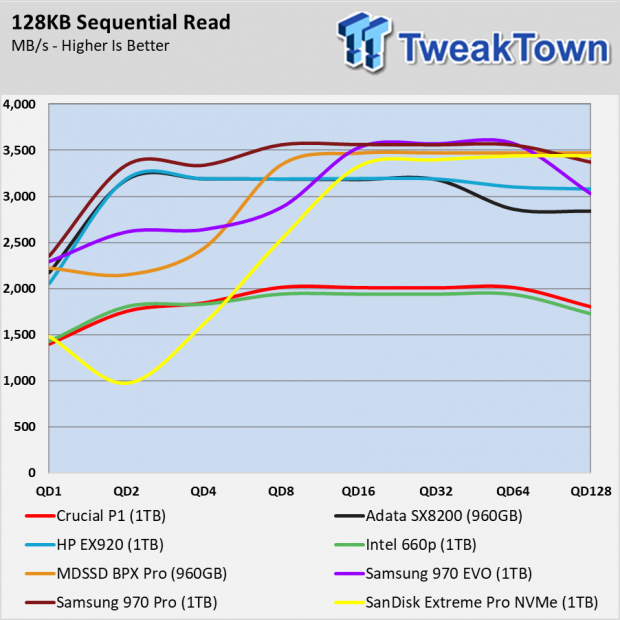 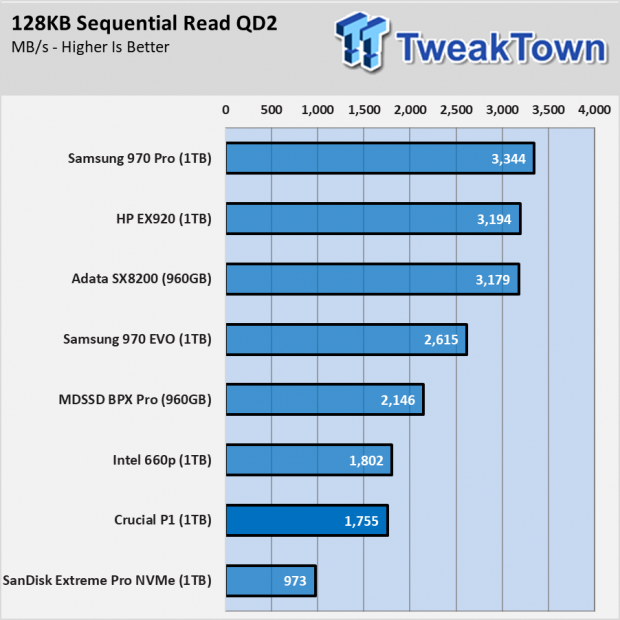 We don't expect the new Crucial P1 to follow the Intel SSD 660p's footsteps through the entire review but in the sequential read test using burst data, the two look like identical twins. 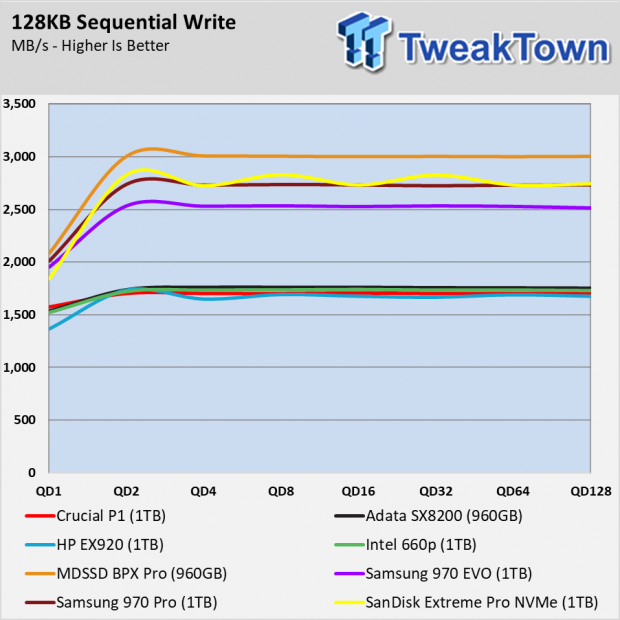 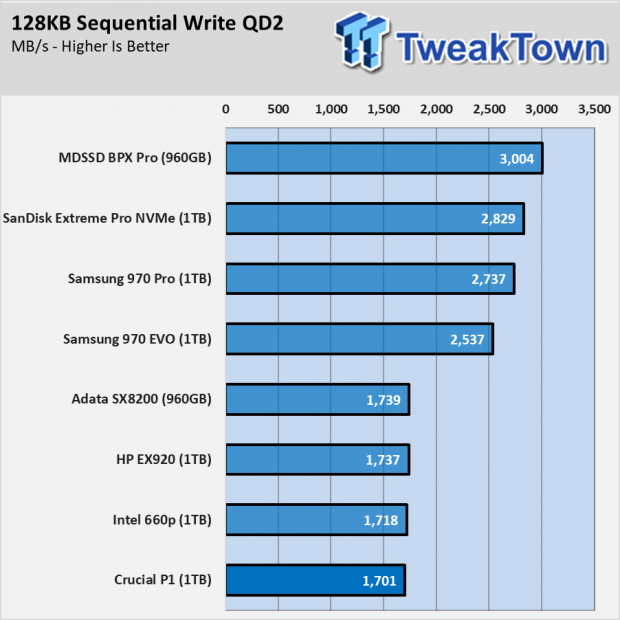 Later in the review, we expect to see several comparisons to the two drives with the mainstream SM2262 controller used in the Adata SX8200 and HP EX920. The four SMI controlled drives show nearly identical sequential write performance with data bursts. 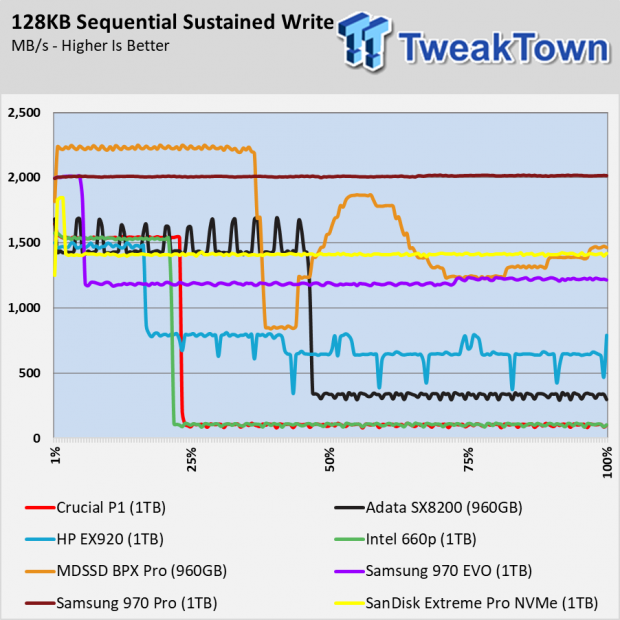 Differences in firmware, programming, and the overall architecture changes the script. The 960GB Adata SX8200 delivers longer SLC buffer writes compared to the three other drives with SMI controllers. The EX920 delivers higher sequential write speeds after the SLC buffer fills. The Crucial P1 follows the Intel through most of the test with a 25% buffer using the drives nearly empty and then dropped sharply when the data has to fold into the QLC. 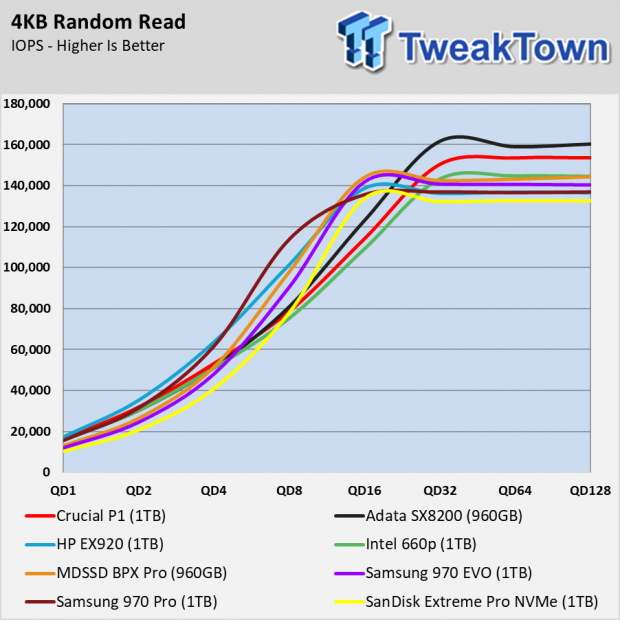 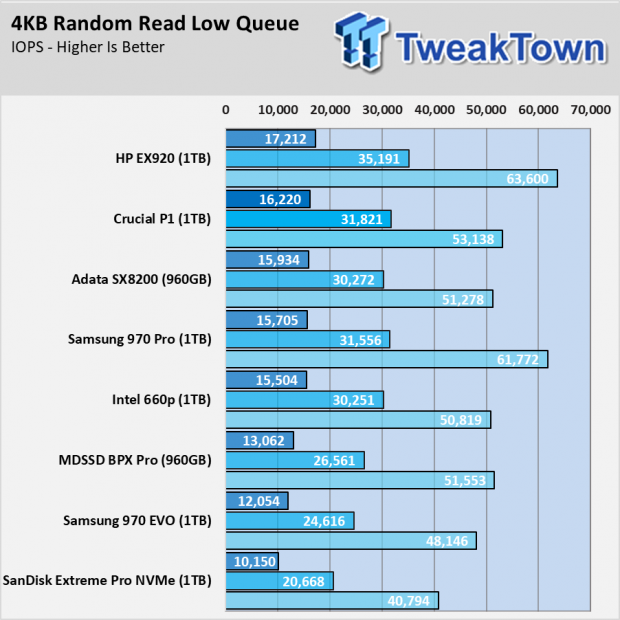 The 1TB P1 does deliver strong random read performance that only trails the 1TB EX920 at queue depth (QD) 1. The drive scales well as we ramp up the workload through queue depth. For many casual PC users, the very-low queue depth performance will have a larger impact on performance than the other 4-corner tests. 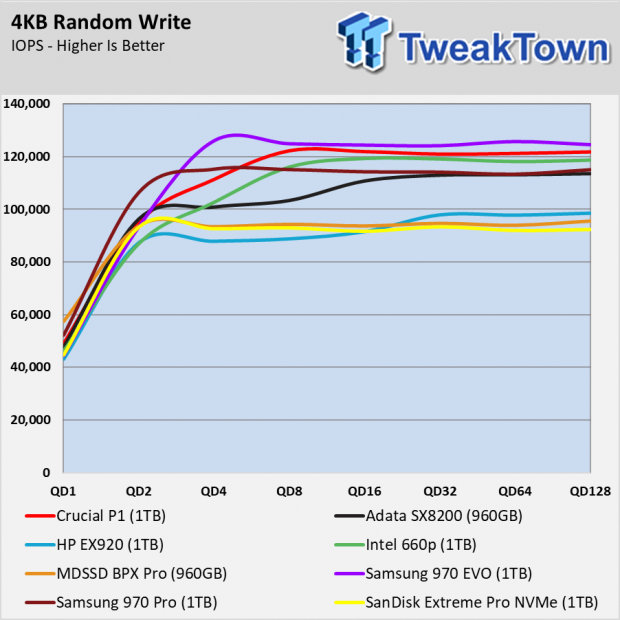 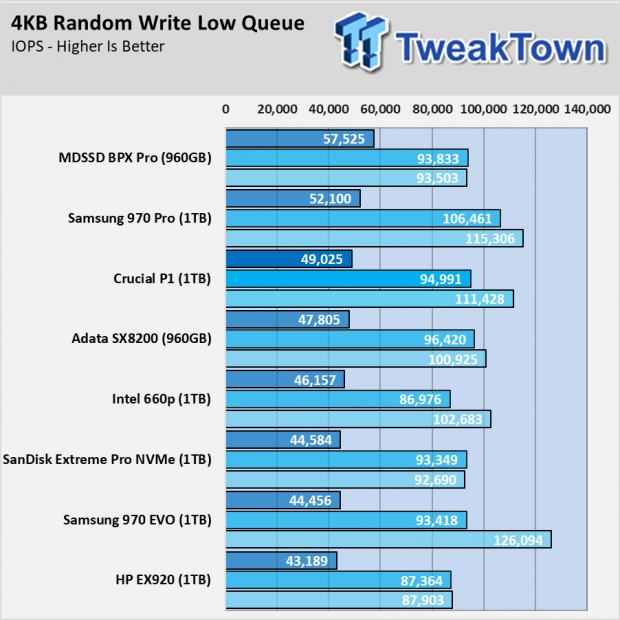 Crucial's unique flash programming allows the P1 to deliver better random write performance than the Intel SSD 660p in the same capacity. The P1 even outpaces the Adata SX8200 at low queue depths but only by a small margin. 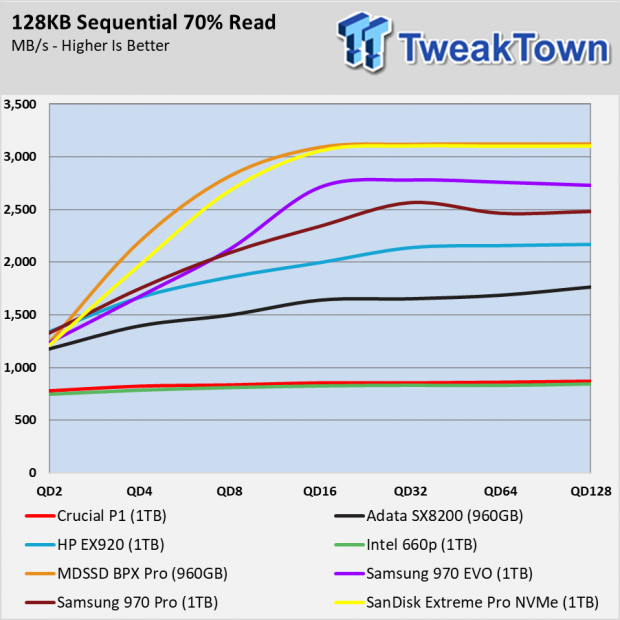 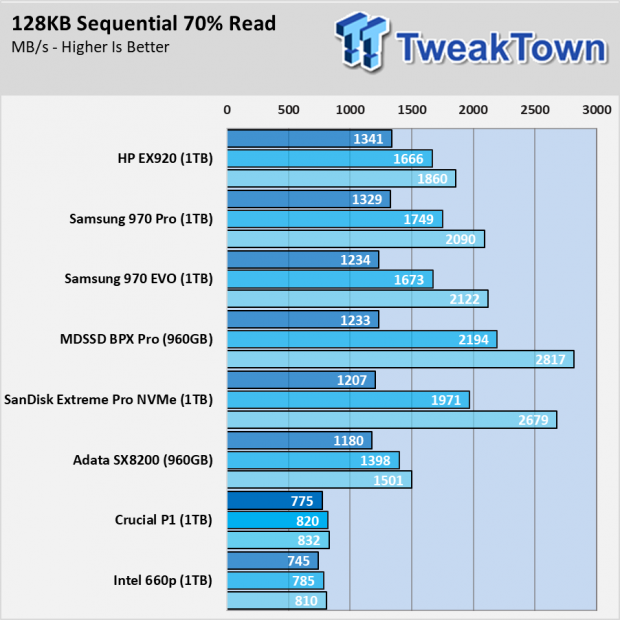 The 4-channel controller, and use of QLC flash, hurt sequential mixed workload performance. Our burst test uses 70% reads, and the mix brutalizes the QLC SSDs released so far. This may be the impact of the flash, but we suspect the lower-end 4-channel controller places a role in this as well. At least it's not DRAMless. 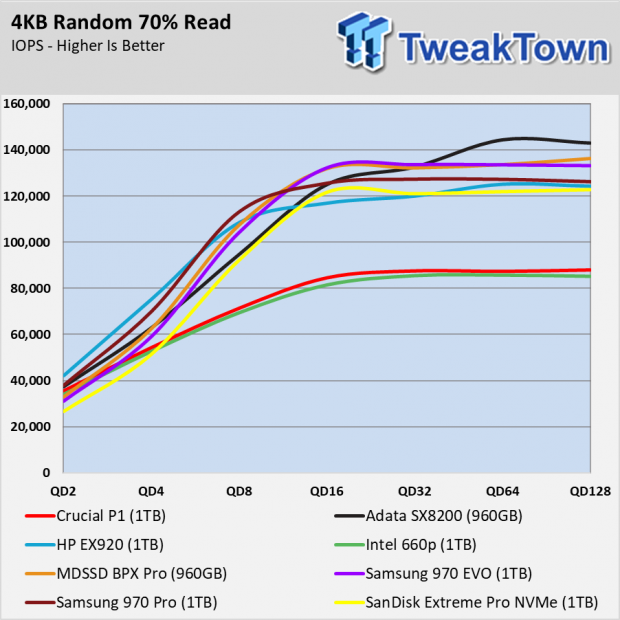 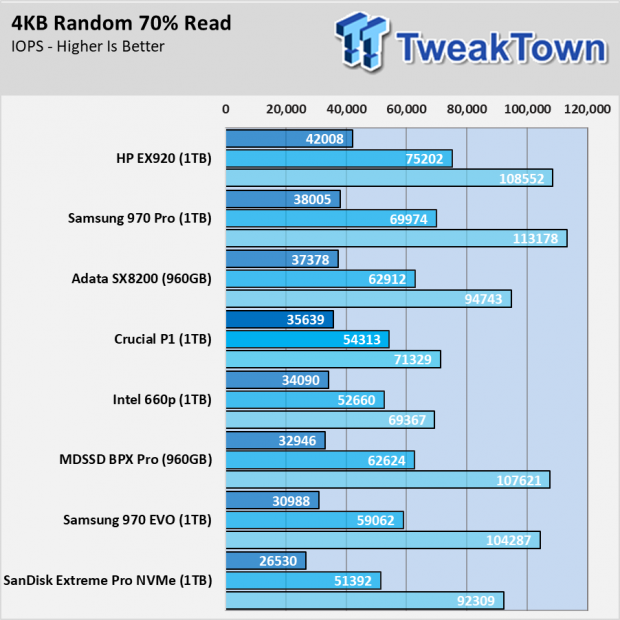 If it were a DRAMless design, the random mixed workload would suffer. At QD8 and higher the 1TB Crucial P1 shows poor random mixed workload performance. QD8 is a fairly high workload compared to the target audience for this product. At lower queue depths, the 1TB P1 performs very well, just slightly lower than the best flash-based NVMe SSDs shipping today. This is very good for casual PC users, those Crucial targets with the P1. 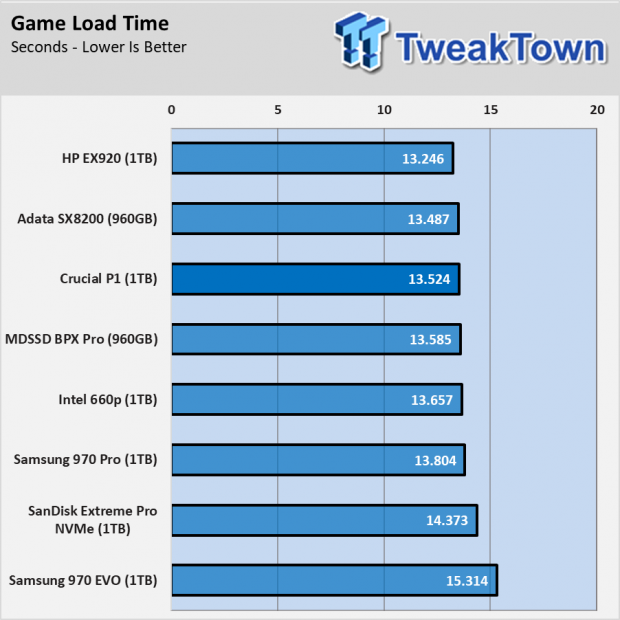 The high random read and random mixed workload performance make the 1TB P1 a good SSD for gamers that don't install a lot of software. Sadly, I'm right in the middle of this camp. Most of the games I play are older and don't take a lot of space compared to the massive installation required for modern titles, and haven't had an update in a few years.

Yes, I love the Command & Conquer series, and you will never take it away from me!

We used Final Fantasy: Stormblood for this portion of the review and as you can see, the P1 loads the game quickly. 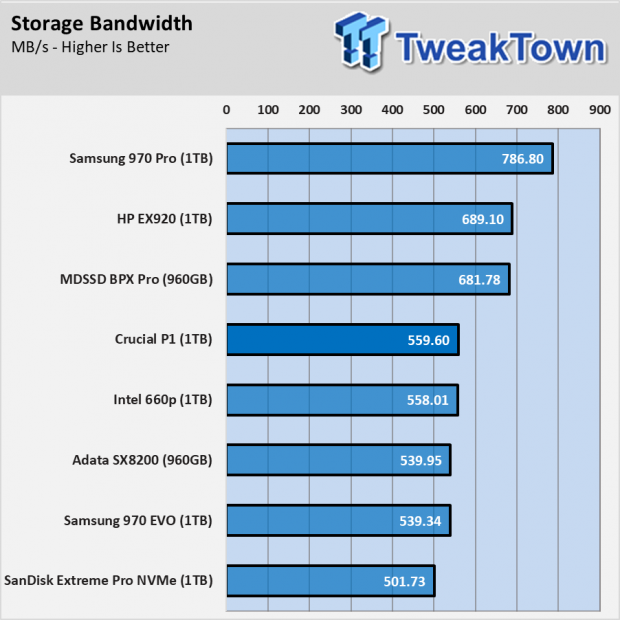 The PCMark 8 Storage Test uses a more diverse set of applications, nine in-fact, to run ten different tests. We use the average of the ten tests and present the throughput score to get a very accurate general-purpose breakdown of the drive's performance.

The results show three distinct performance tiers. The Samsung 970 Pro is at the top, and as the last remaining consumer SSD shipping with 2-bit per cell (MLC) flash, it should be at the top. In the middle, we have the HP EX920 and new-to-market MyDigitalSSD BPX Pro. The other five drives all fit into the lower tier with less than 60 MB/s between them. The 960GB Crucial P1 is at the top of the third tier. This is a bit better than we expected. 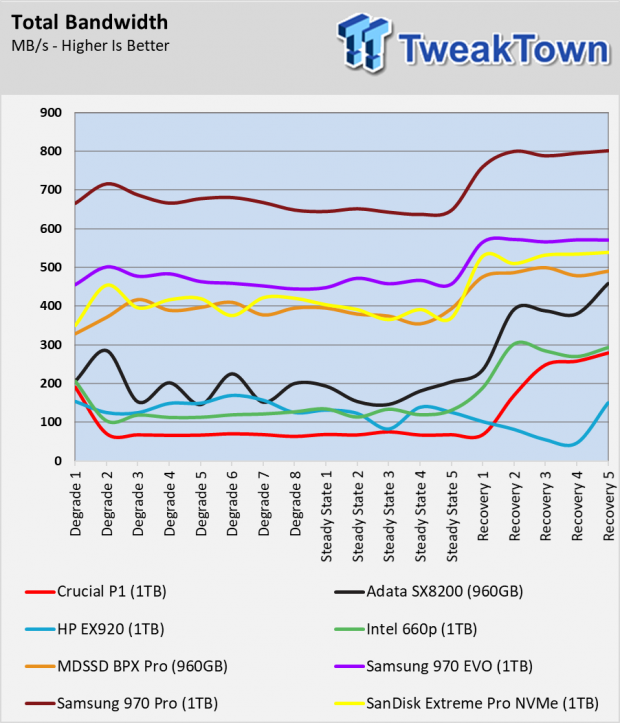 In the introduction, we talked about what you are actually paying for with SSDs today and what a more expensive drive actually gives you. The dollars for sustained performance is a general rule, and we expect the P1 price to rapidly decrease in time for the holiday shopping season to put this drive in its rightful place on the scale.

We say that because the 960GB P1 performs poorly under an intensive workload. The more companies lean on SLC cache to increase light workload performance and endurance, the worse the drives get when users turn up the heat. The heat, in this case, is many data writes in the short period. 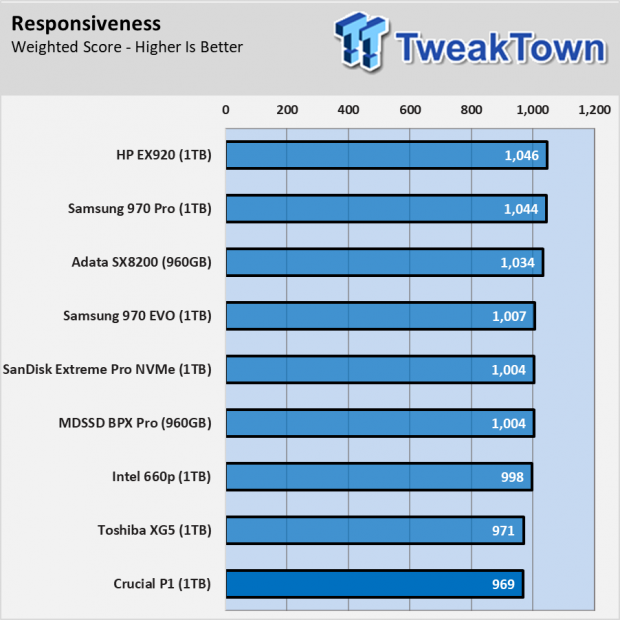 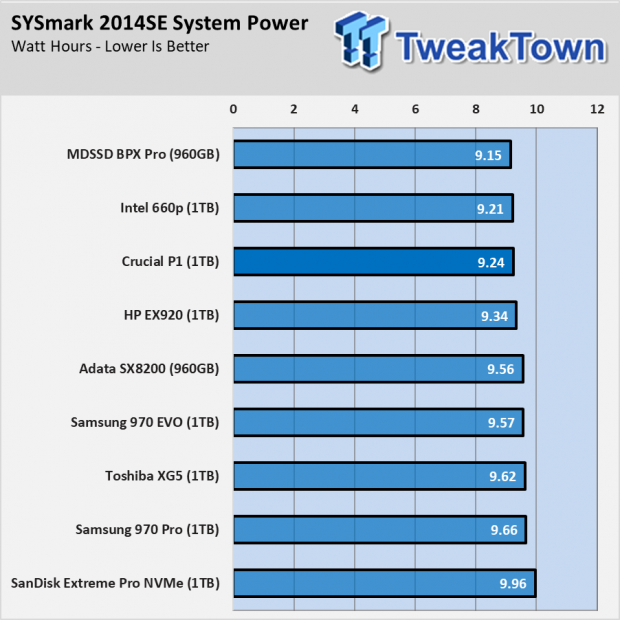 The SYSmark 2014 SE test isn't intensive through the entire test, but does have some heavy write applications in the mix. This test doesn't use traces; it's the actual Office and Adobe software running on the machine. The write heavy portions of the test slow the other portions because the Crucial P1 has to manage the data. During the management periods, the latency increases and that hurts the user experience that makes up the score in the Responsiveness results.

The 1TB P1 is power efficient in a desktop. Sadly, this is the one area where users have little regard for power consumption. 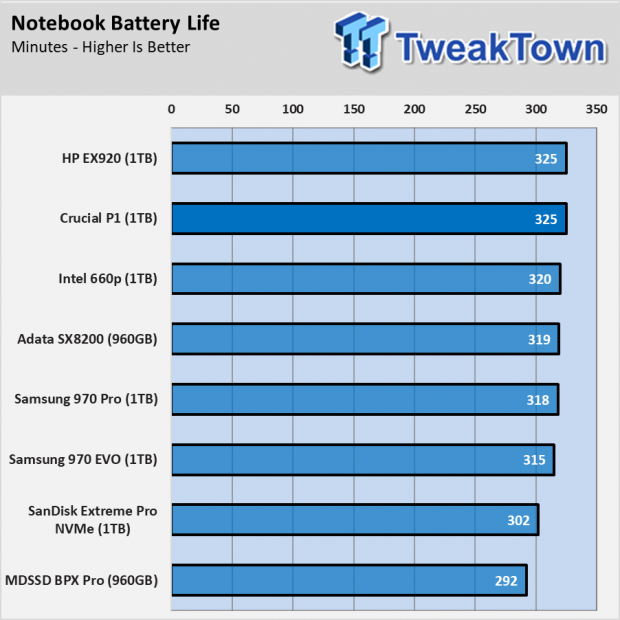 In a notebook, however, users do care about the power consumption of each component. The 1TB Crucial P1 performs very well in our Lenovo Y700-17. The MobileMark software uses the actual applications to run through a typical night of office work, the same type you may use on a long flight for work.

Contrary to the optics, the Crucial P1 product line didn't just pop up over the last couple of days. It was part of a several hour discussion during CES in August with select media and a room full of Micron and Crucial folks. It was around the same time we spotted what we expect to be Crucial's second NVMe SSD at Flash Memory Summit. 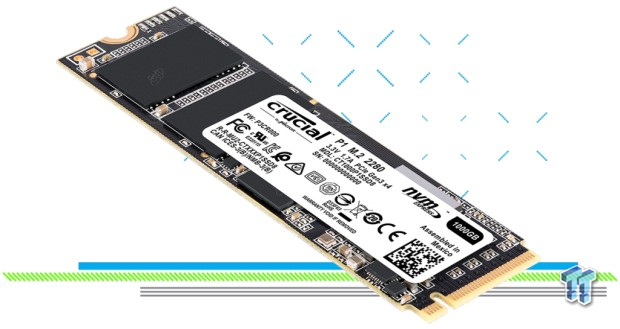 The point is this, around the same time the Intel SSD 660p NDA lifted and Crucial knew for several months the price of that series, $199.99 for the 1TB model. I don't understand why Crucial released the 1TB P1 at $219.99 knowing the performance is similar. The two drives are very similar with the benchmarks, accessories, and other relevant factors in a game of one-upmanship at a baby step distance.

The only thing we can think of is the long term pricing where Crucial must have a detailed plan of price decreases leading into the holiday shopping season. If the company moves away from that plan early in the release cycle, it will lessen the impact when we are all blowing up the Discover Card to put checkmarks next to family member's names. Before the end of the year, I think we will see the 1TB P1 near the current price of the 1TB MX500, around $159.99.

At its current price of $219.99, the 1TB Crucial P1 doesn't impact the consumer NVMe market. We can even argue that the Intel 660p priced at $199.99 also suffers from the same issue. That issue is the Adata SX8200 that currently sells for just $208.99 while delivering superior performance and more than three times the endurance.

As it sits today, the 1TB Crucial P1 is not a very competitive SSD for our readers as either a primary use drive, or something you buy for someone else. I don't think it will stay that way once we get deeper into the holiday shopping season. It's never going to be a great SSD, but priced appropriately we think it will a good drive for casual PC users and business travelers looking to maximize notebook battery life.