Like 3-bit per cell (TLC) before it, there is a lot of fear surrounding QLC. Will the technology provide enough write endurance, how long will data last on the memory, and the area that terrifies many the most, how much latency will the extra bit add?

We can't answer some of those questions today, but so far the Intel 660p looks really good. It's not a complete game changer, but it's a helluva lot better than we expected. Intel's 64-layer QLC memory uses a slightly faster IO bus speed compared to 64-layer TLC memory. Intel paired the memory with a Silicon Motion, Inc. (SMI) SM2263 controller that is similar to the SM2262, so the application performance is exceptional.

Let's look at the numbers first and then dive into how Intel got there with the hardware details and feature set for this series. The 660p comes to market in three capacities, 512GB, 1TB, and 2TB. The 1-Terabit die size is not effective for smaller sizes like 128GB and 256GB, a detail we'll look at later in this review.

The 660p features symmetric for all three sizes. The series offers users up to 1,800 MB/s sequential read and write performance. The random performance reaches as high as 220,000 IOPS, also for both reads and writes.

The SLC cache expands and contracts, depending on the amount of data stored on the flash. Intel is the first company to disclose the size of the flash and the incremental shrink as users store more data.

For my personal use, I use the size of a Blu-Ray ISO file, around 50-gigabytes, for the cache size target and a 10-gigabit ethernet network speed, it's around 1,000 MB/s for sequential writes. I want an SSD capable of writing 50GB at close to 1,000 MB/s to personal PC over a network.

The capacity of your SSDs matters. The Intel SSD 660p 2TB surpasses my personal needs all the way up to 75% fill, the amount of data already stored on the drive. That backs down to 65% for the 1TB model and 45% on the 512GB model.

Writes outside of the SLC cache fall to native QLC write speeds. In our 128KB sequential write test on a 1TB 660p, the native QLC write speed is right around 85 MB/s. The performance is right around what we measured with planar TLC technology using a 512GB drive that was popular in 2015. 3D TLC's native write performance after the SLC buffer is considerably faster, around 250 MB/s using the same workload. Most users will never see native QLC speeds under normal workloads unless you transfer large files, like Blu-Ray ISOs.

The SSD 660p is Intel's successor to the 600p. Most companies categorize these at "mainstream NVMe". At one time we called these products entry-level NVMe, but with DRAMless NVMe products coming to market like the Toshiba RC100, there is a clear divide between the two classifications.

The Intel 660p ships with features we rarely see on mainstream NVMe products. The series supports user AES-256 encryption with Pyrite 1.0 and 2.0. The series also comes with a 5-year warranty in a world where most mainstream SSDs only carry a 2- or 3-year warranty.

Intel covers the series with a full 5-year warranty but this isn't the SSD you want to use to download Torrent files. Endurance is the weak spot right now. Intel has been on the conservative side with TLC and we hope the QLC ratings are also conservative. What makes Intel different from other manufacturers is how the products react to reaching the limits of guaranteed coverage. The Intel consumer SSDs will move into a read only state making booting from the drives impossible. Other company's consumer SSDs will warn users through Windows, but not build a brick wall that limits usability. 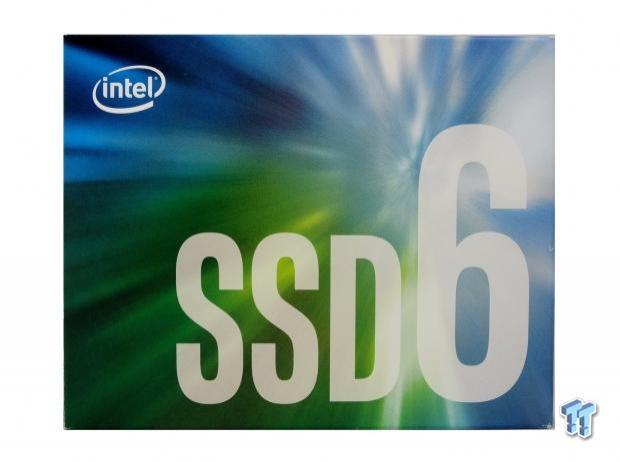 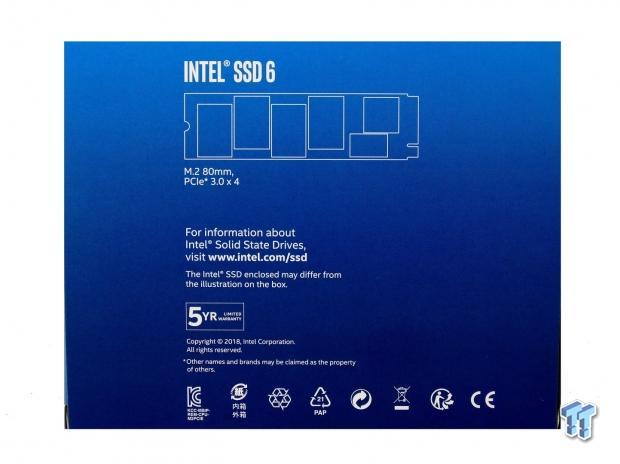 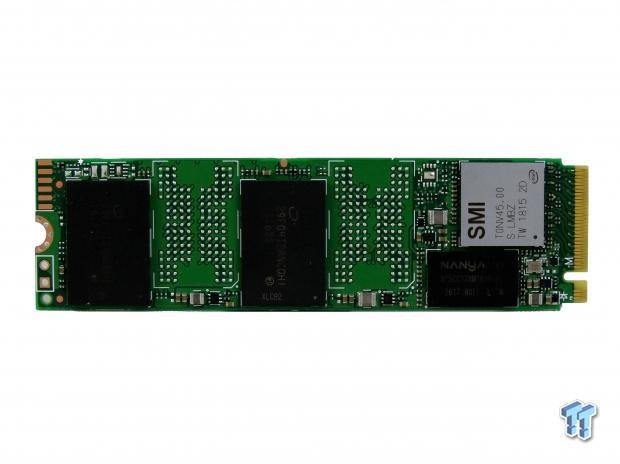 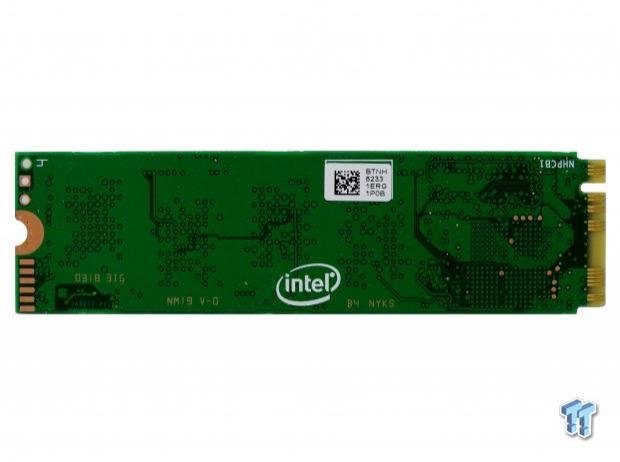 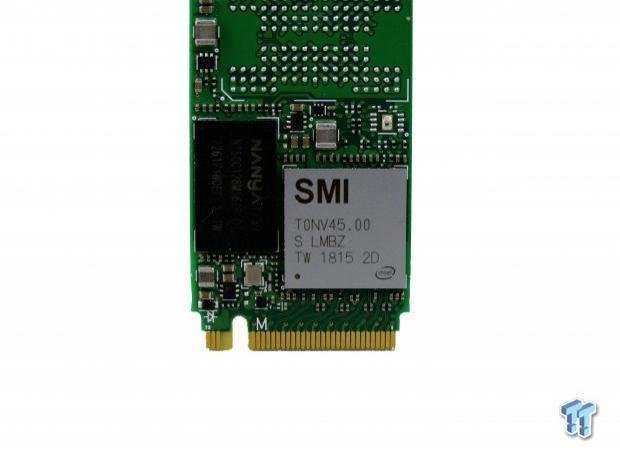 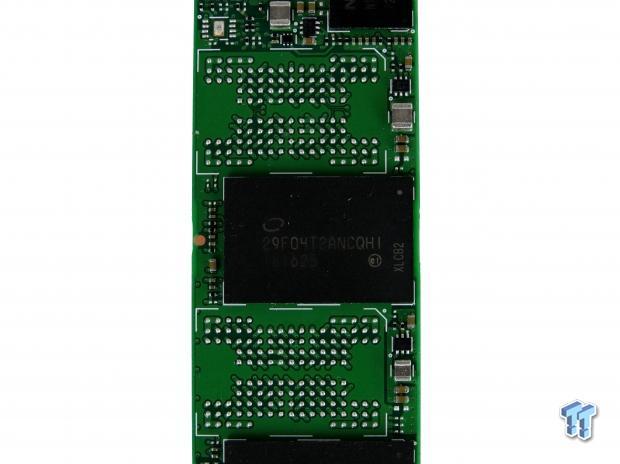 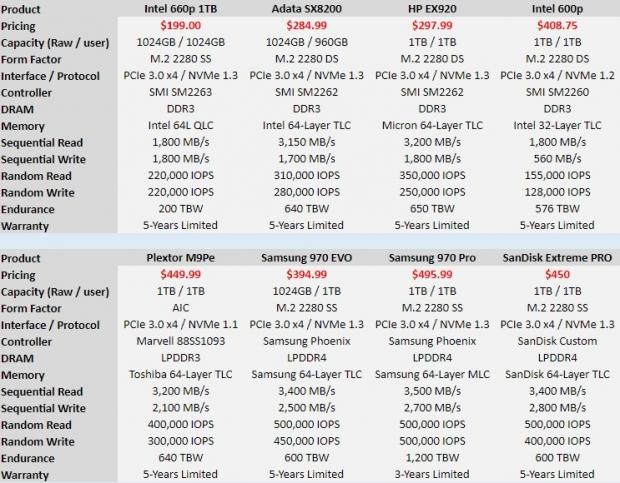 Instead of reaching for the low-cost NVMe SSDs with 4-channel and DRAMless architectures to bore you with, we pulled out the high-performance results. The SSD 660p QLC flash uses the same interface speed as the 64-layer TLC memory. The low queue depth random read performance is similar, that makes the 660p a very fast SSD for consumer workloads. The performance is much higher than any entry-level or mainstream NVMe shipping today and leaps better than anything shipping with SATA.

The 660p Series is also much cheaper compared to the drives we paired it against in this review. That is something to keep in mind when we look at the synthetic performance results earlier in the review. The best comparison comes from the Intel SSD 600p, the model the 660p succeeds. 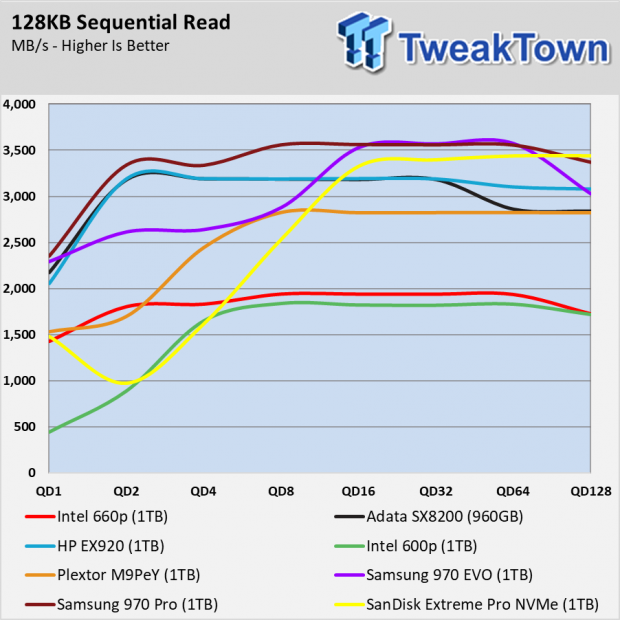 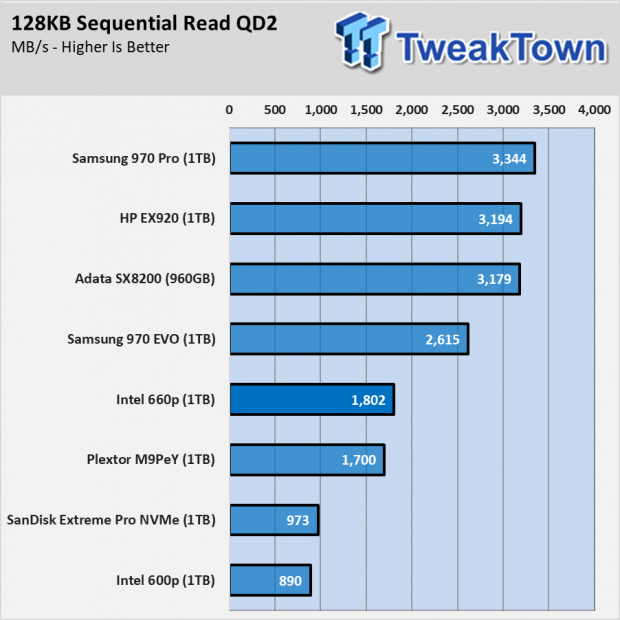 The Intel SSD 660p 1TB is significantly faster at low queue depth (QD) sequential data reads than it's predecessor, the SSD 600p. The drive slightly trails the Plextor M9Pe performance at QD1 but is well off the pace set by the other drives.

At QD2, the 660p is actually faster than the Plextor and SanDisk Extreme PRO NVMe 3D. The 4-channel controller will mean some shoppers will sacrifice some performance over a more expensive 8-channel drive. 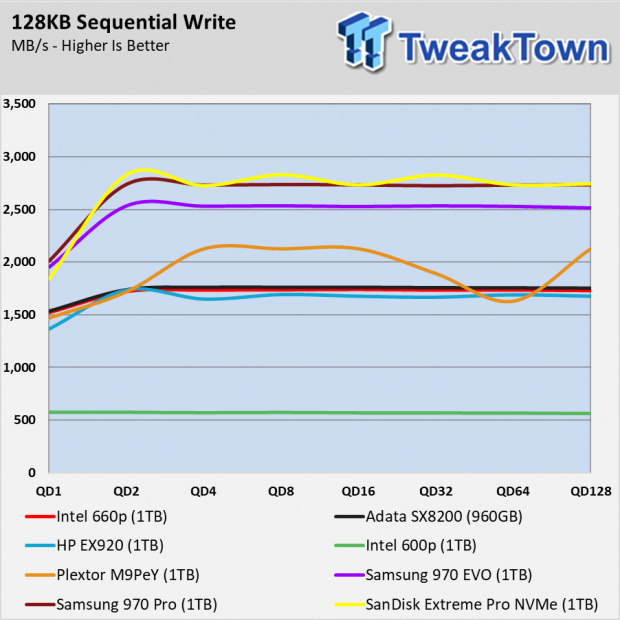 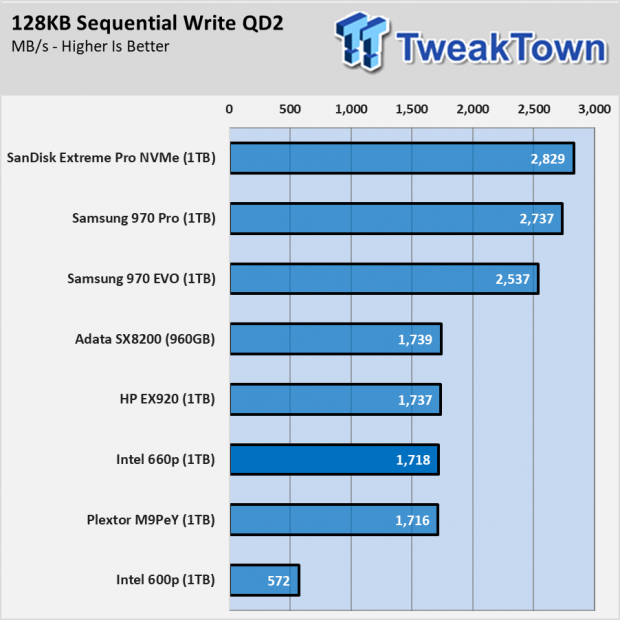 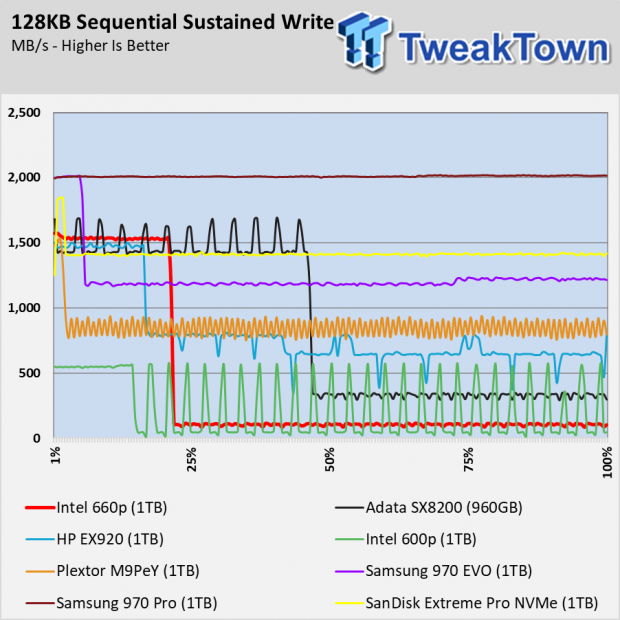 Users receive a severe penalty for writing beyond the SLC cache. The Intel SSD 660p gives us a generous buffer before the drive falls into a lower write speed state but crossing the line impacts the transfer speed. These are not lifetime limits, though. The cache will purge the data quickly so a large file transfer does not impact another after the buffer clears the data. 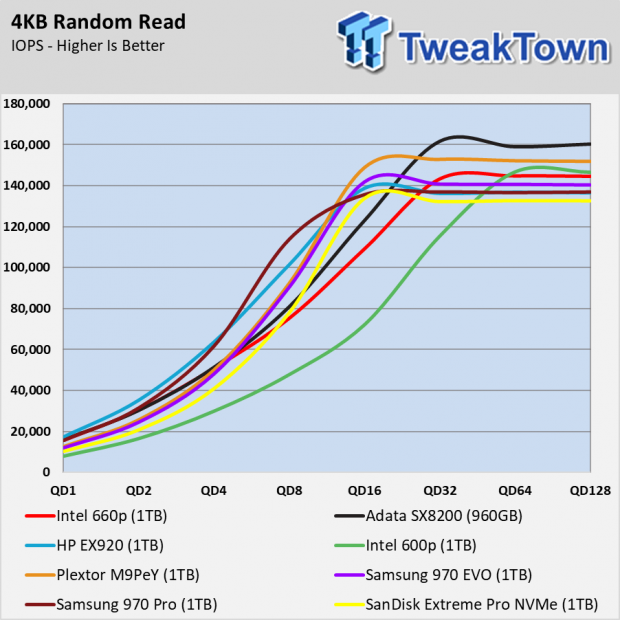 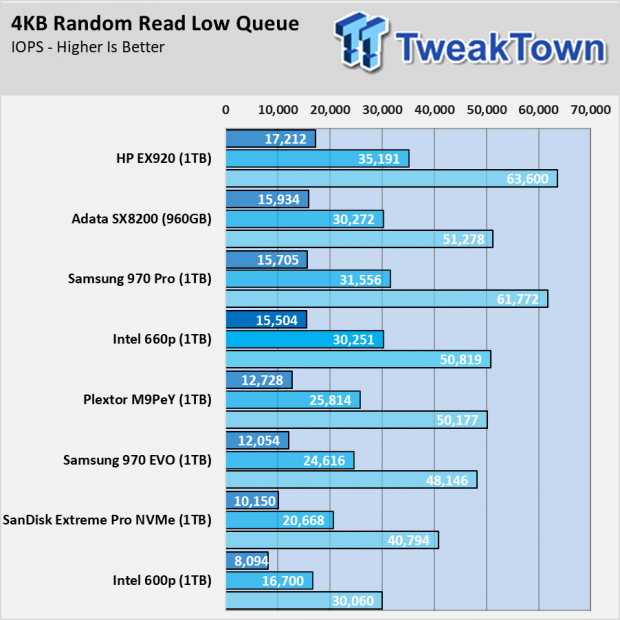 Random read performance has the largest impact to on the user experience in Windows. This is the type of data most often read when opening applications, opening windows in the OS, and for most of the things we do on a PC. The Intel SSD 660p delivers over 15,000 IOPS at QD1. This is around 4,000 IOPS faster than any SATA SSD we've tested and close to double what we measure on entry-level NVMe SSDs. The 1TB 660p even outperforms Samsung's 860 EVO with 3-bit per cell V-NAND. 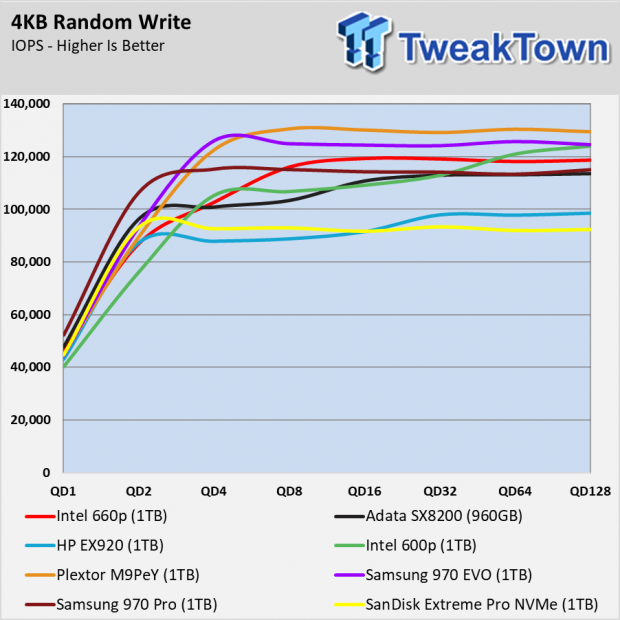 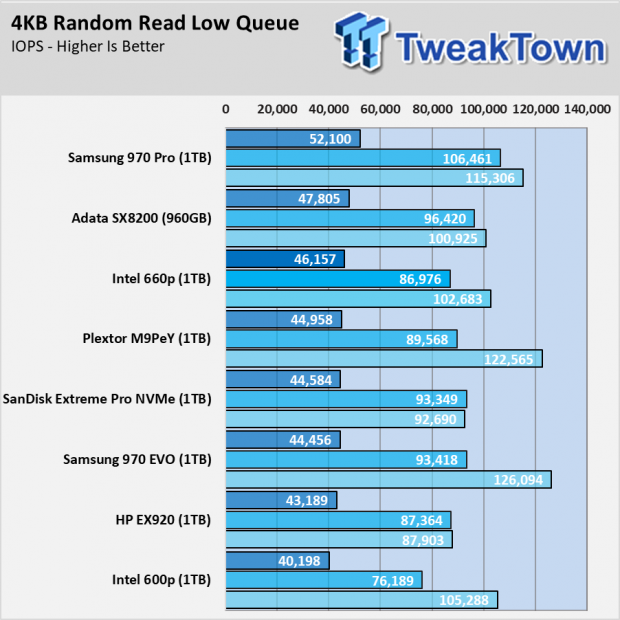 The SLC cache in all of these drives is very fast with consumer-level data bursts. The 660p delivers over 46,000 IOPS at QD1. It's a very impressive number even with the current crop of high-speed NVMe SSDs shipping today. 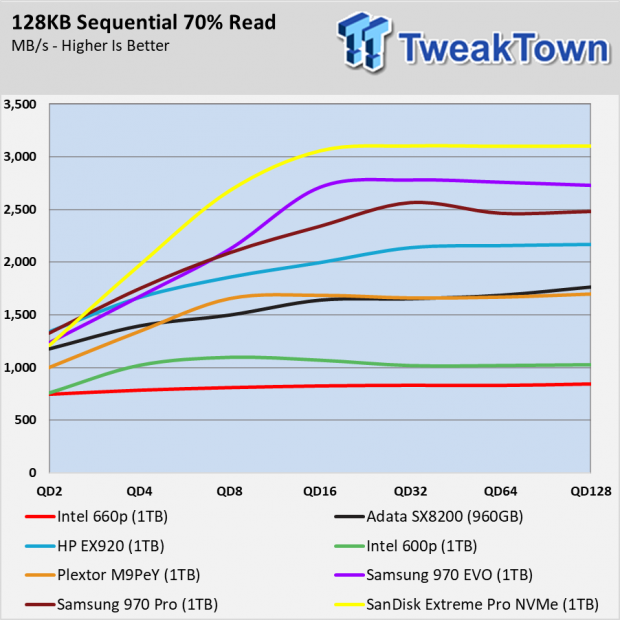 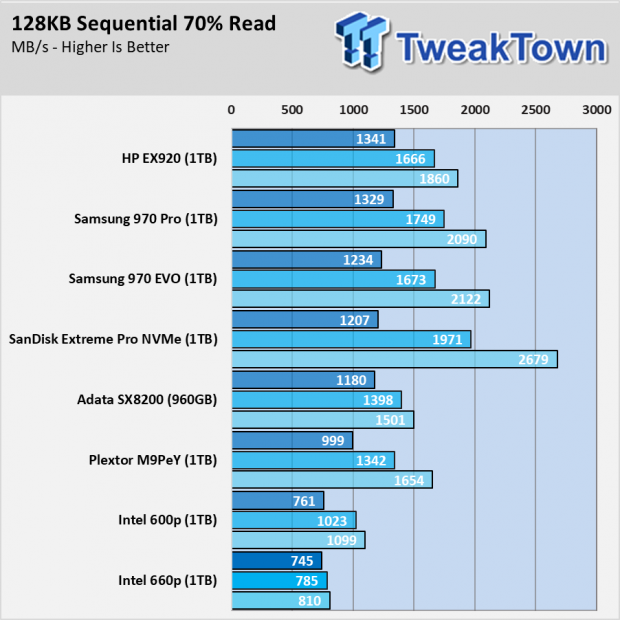 The 4-channel controller architecture does come with some performance weak points. The 1TB SSD 660p shows weak performance in mixed workloads. This is where your drive reads and writes data at the same time. 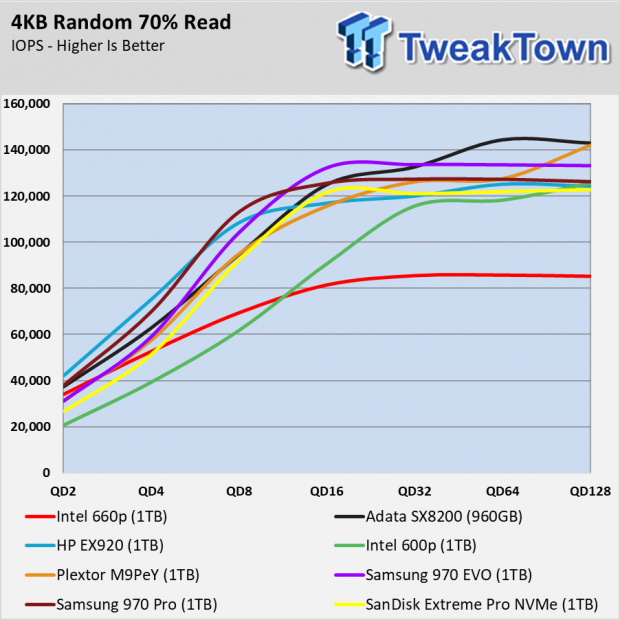 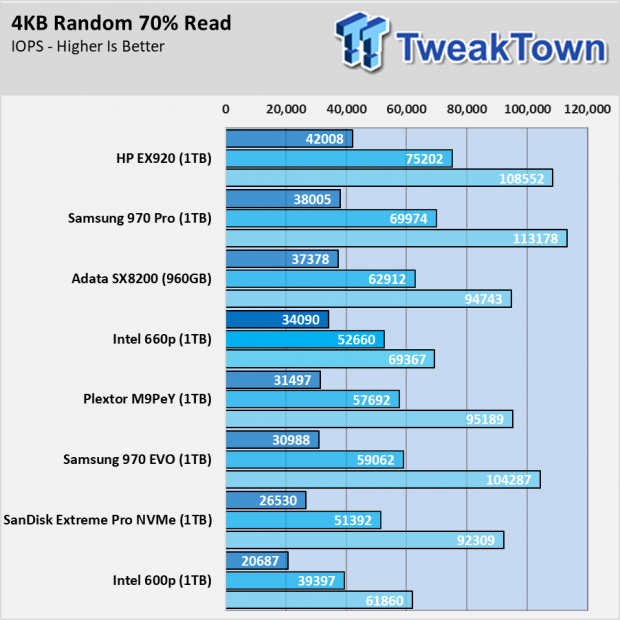 There is a smaller impact on random mixed workloads compared to sequential loads. 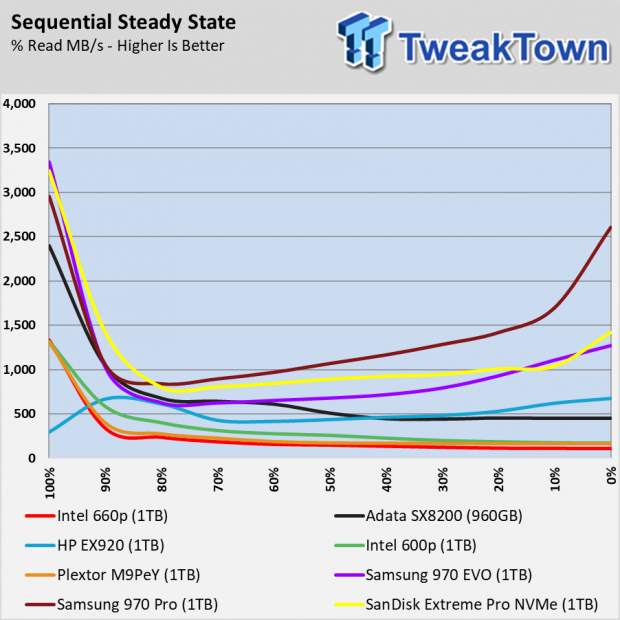 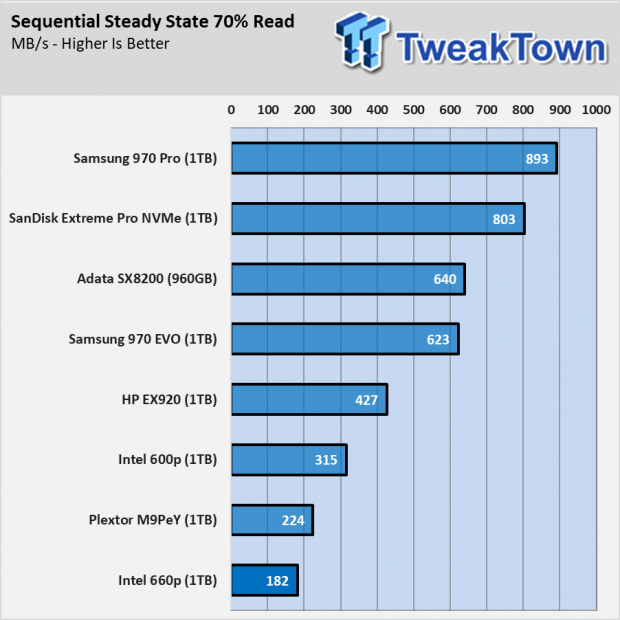 QLC flash technology brings an even larger divide between the few remaining workstation-class SSDs that utilize MLC flash. We hope Intel or another company will release a QLC memory SSD with a more powerful 8-channel controller so we can compare performance on a level field. 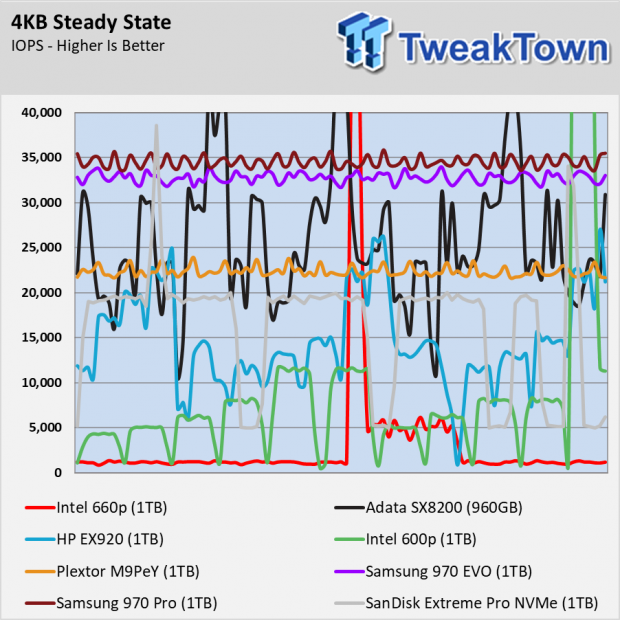 In our first look with QLC memory, we wanted to measure the worst-case performance scenario with random data outside of the SLC cache. The 660p always writes data to the SLC cache before passing the data to the QLC programmed area. It doesn't use direct-to-die writes like some other products.

In the areas that matter to most users, the Intel SSD 660p shows strong performance. Low-cost SSDs, a term that encompasses nearly all products shipping today other than the Samsung Pro series, balance cost and the performance areas of most consumer workloads. The drives do this by masking areas where performance would be weak with strong cache technology. The SSD 660p does an incredible job of that. 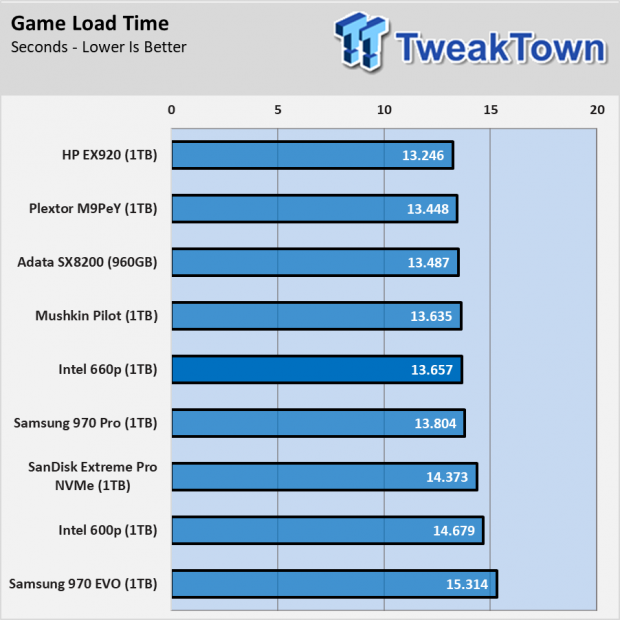 We start our real-world application coverage with the Final Fantasy: Stormblood game level load benchmark. The test shows just how strong the new SSD 660p is in consumer applications. The 1TB 660p load the game levels faster than the Samsung 970 Pro by .2 seconds and is over 1 second faster than the previous generation 6-Series from Intel. 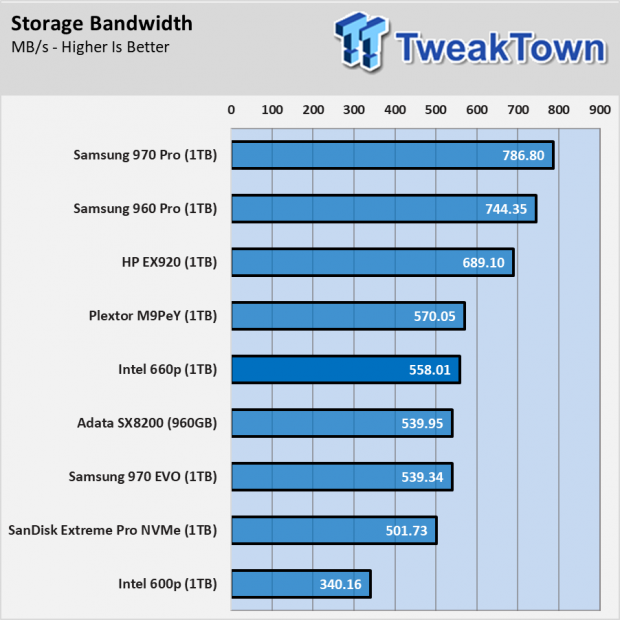 The new 660p uses a similar dynamic SLC cache as the Adata SX8200. Most of the SM2262 SSDs uses a different variation in cache and over-provisioning to force the drives to perform better at different tasks. The 660p is slightly better in our ten-application summary of performance using a wide range of real-world software. 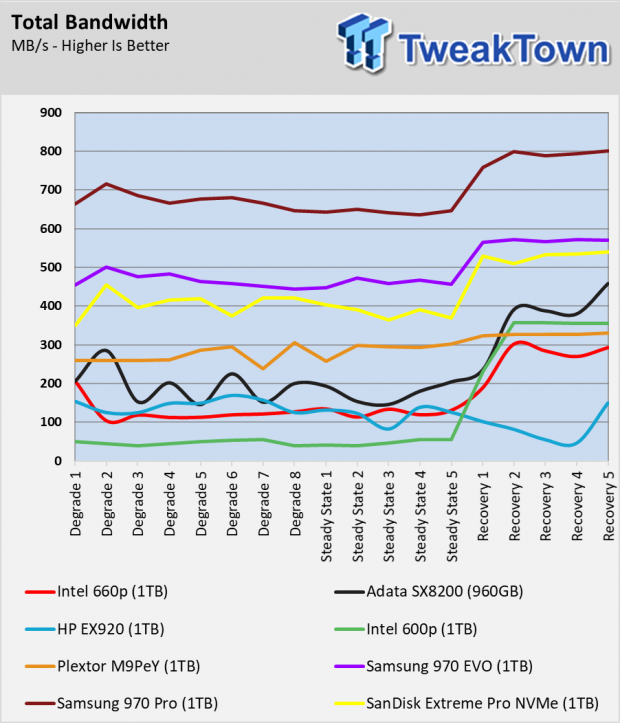 The sequential steady-state test already displayed the 660p's low performance outside of the SLC buffer. The PCMark 8 Extended Storage Test shows us how the drives recover after a forced steady-state condition. The 660p doesn't recover as fast as most of the other drives so running the drive nearly full and writing a lot of data will impact the user experience. 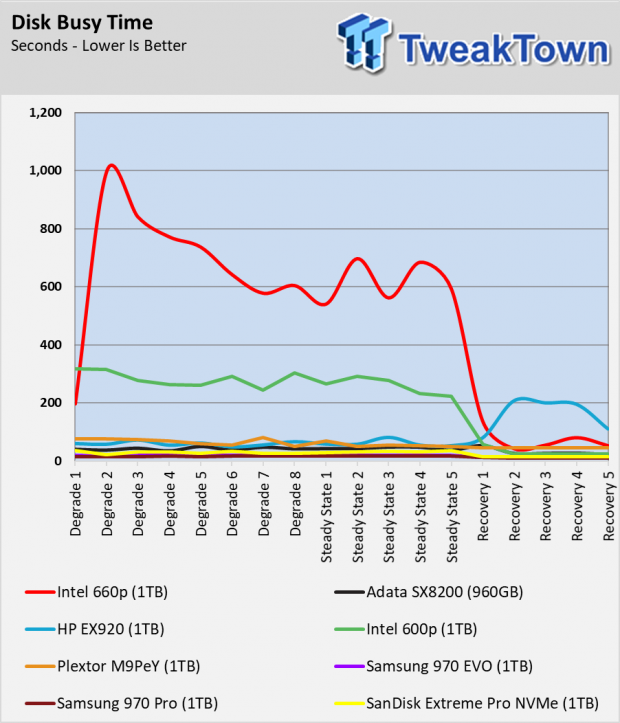 The disk busy time portion of the test shows us how the compounding latency forces the drive to work for much longer than the products with TLC and MLC technology. 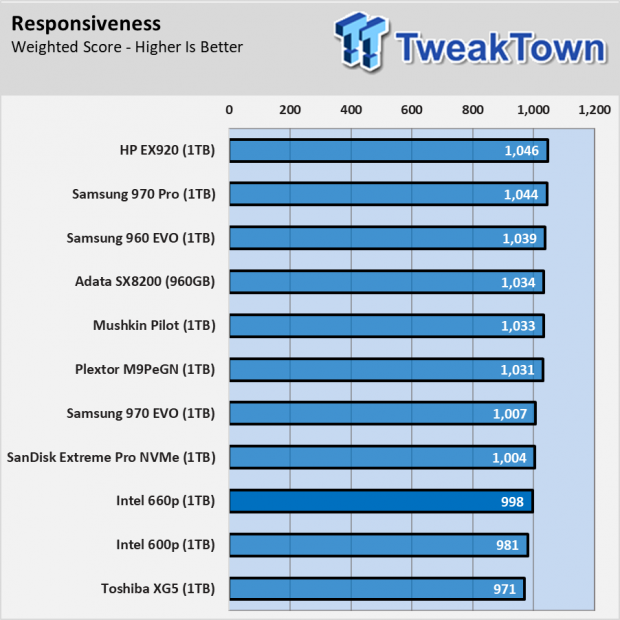 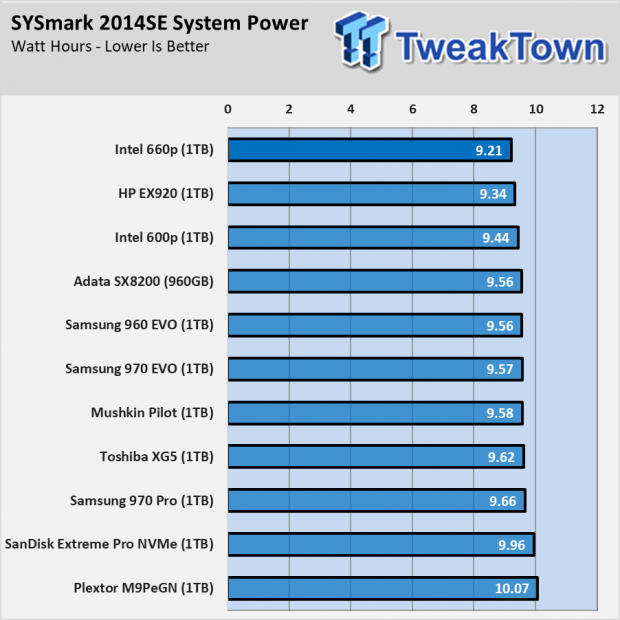 Under a business-focused workload, the Intel SSD 660p delivers system responsiveness similar to a Samsung 850 EVO. This test using the BAPCo SYSmark 2014 SE software uses business applications to run a day's worth of office work. 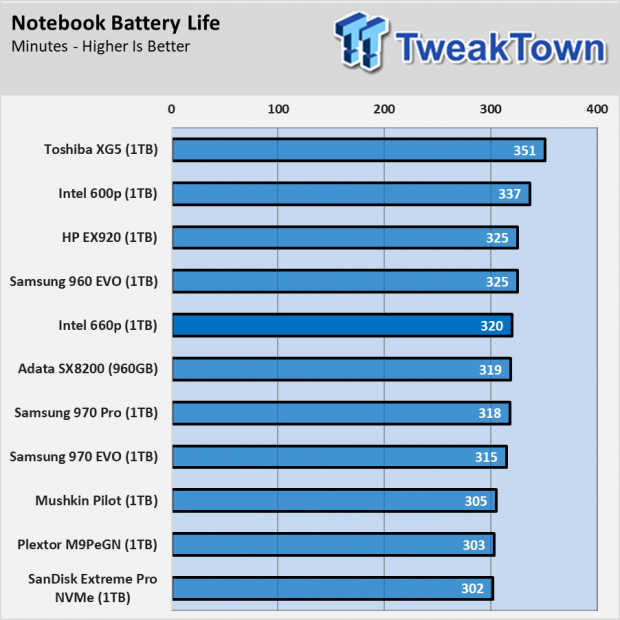 The Intel SSD 660p removes most of our 4-bit per cell fears, but there are still questions around its long-term use. The performance is high enough to tempt shoppers to give the technology a chance to succeed. The low cost sweetens the deal. The Intel 660p is the NVMe most of us waited for.

The 660p's low endurance rating is the culmination of Intel's conservatism and using this series to define the entry-level NVMe SSD market for the future. Going into this review the endurance rating didn't do much to ease our QLC fears. After talking with other companies at Flash Memory Summit, we can let go of most concerns. Other companies will release consumer SSDs with similar flash but nearly double the terabytes written warranty coverage. Early 64-layer QLC from IMFT already has similar to superior endurance than first generation TLC flash. With 1,000 to 1,500 program-erase cycles, 16nm TLC memory didn't burn down the internet with negative reviews. QLC is in a better position than early TLC technology because companies now have the error correction technology based on years of use with TLC.

We chose to put the Intel SSD 660p against premium SSDs in our charts today. The 660p performance proves this series is more than an entry-level NVMe SSD. Intel did a good job with first generation QLC across the board, but advanced controller technology from Silicon Motion, Inc., and superior cache algorithms can take some credit. On paper, the SSD 660p's specifications show this series as a mainstream model at best. Under real-world use, the 660p in typical consumer applications is nearly as good as the best selling products shipping today. The performance comes from early QLC's high random readabilities that are almost as good as 64-layer TLC.

The Intel SSD 660p isn't as fast as many of the NVMe drives using the SM2262 controller, but the difference is small enough to go unnoticed by more users. The number that most shoppers will look at is the price. The SSD 660p goes on sale today at two-thirds the cost of the SM2262 drives.

The 660p is closer to SATA pricing than premium NVMe. For many shoppers, this breaking point turns the tables on SATA and makes NVMe affordable.