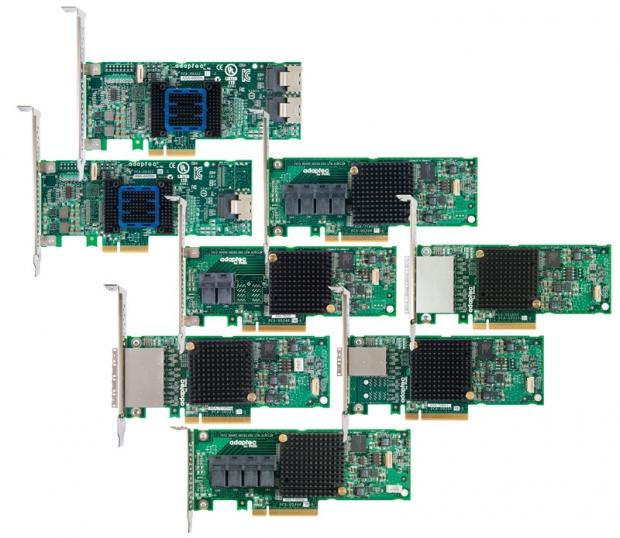 Adaptec has announced a new line of 6Gb/s HBA's (Host Bus Adapter) in the form of the Series 7H, 7He and 6H families. This new line of HBA's marks Adaptec's return into the HBA business, a market that Adaptec had chosen to sit out of for the past few years.

Adaptec was acquired in 2010 by PMC-Sierra, a semi-conductor developer. Soon after the merger of the two companies, Adaptec launched their 6 Series RAID controllers and adaptors. The 6 Series of controllers were designed before the resources of PMC-Sierra were brought into play. The Series 7 products are the first generation of controllers from Adaptec that reap the benefits of their merger with PMC.

Adaptec is following the Series 7 RAID controller release with their return to the HBA market. This strategic decision to rejoin the HBA market is due to the changing realities of server design. By anticipating the needs of the HBA market, Adaptec hopes to come in with new features that will resonate with their customers. Companies such as Facebook and Google are deploying their own custom-built servers into their datacenters, and the need for HBAs and slim storage solutions has become increasingly prevalent.

One of the greatest aspects of these new HBAs is the ability to pack more density into slim servers. To cram enough connectivity for the plethora of available ports onboard these small cards, Adaptec is transitioning to the HD MiniSAS specification one year early. Most companies are waiting for the 12Gb/s generation to make the transition, but Adaptec feels that this will put them a full year ahead of the competition in instituting the switch to HD MiniSAS.

The features are powered by new PMC silicon in the form of the 16 native port PM8019 and PM8018 processors. These controllers provide SAS 2.0 connectivity via the PCIe Gen3 x8 bus. With sequential read and write speeds on the PCIe Gen3 bus clocked at 6400MB/s, and over 800,000 IOPS with the 4K block size, these HBA's surely will not disappoint in the speed category.

Another new feature employed by two of the Series 7He models is the MaxCrypto functionality. This provides the industry's only HBAs that feature encryption. We will cover this in further detail in the following pages.

Pricing has not been announced yet, but prices are projected to be competitive with competing solutions. Full availability for all of the product family will be in Q2 of 2013. We expect to have in some silicon for testing well before that, but first let's take a look at the entire line-up, and some of the functionalities that these controllers bring with them.

The Continuing Evolution of the Server Market 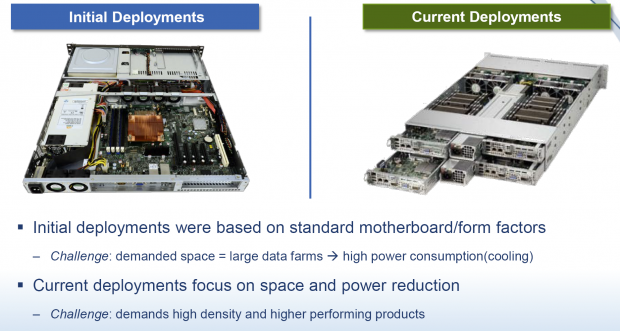 The primary motivator for Adaptec to re-enter the HBA market is due to the expanding use of HBAs in both high-density and custom-built server solutions.

The old model of server deployments is changing rapidly. The approach of using standard motherboard form factors has begun to give way to quad-node solutions. These types of servers, used in compute clusters and other deployments, provide more density and higher performance in a smaller space. There are many advantages to this approach, significantly reducing TCO and OpEX expenses.

These types of servers are becoming available from typical OEM suppliers, but require the slimmest applications for storage solutions. Quadrupling the amount of native ports available on their HBA's provides customers with significantly more ports without the need for additional expanders.

Expanders themselves can bring about a loss of performance for the overall solution. Expanders always incur a latency penalty and can adversely affect sequential throughput. Factoring the cost for procurement of expanders is just the beginning of an ongoing OpEX expenditure. The space required within the server can limit the storage density, and then the associated costs of powering and cooling the extra hardware add up quickly over the life of the device.

RAID controllers are losing favor in many deployments due to the tremendous capacity of HDDs. The available capacity of near-line and enterprise-class HDDs has expanded rapidly with technology advancements, bringing new problems into the datacenter. Failed RAID arrays can require an excessive amount of time to rebuild due to the larger size and slow speed of HDDs. In many cases, the length of a rebuild on a large RAID array can require so much time that the odds of another drive failing during this process is mathematically assured.

This guarantees a loss of data in RAID 5 deployments, and in some cases will require an additional layer of parity to negate the loss of data during the inevitable rebuild. RAID 6 lowers the available capacity of the solution and hampers performance. This also does little to address the long rebuild times or the compromised performance during these rebuild periods.

Another solution for this problem lies in simply discarding the array and rebuilding it from a backup or replication scheme. This provides administrators with a faster means of bringing the array back on line, and in many cases, this will negate the need for a RAID controller.

As HBA's begin to make more sense in many applications typically served by RAID controllers, there will be an accompanying expansion in the HBA market. 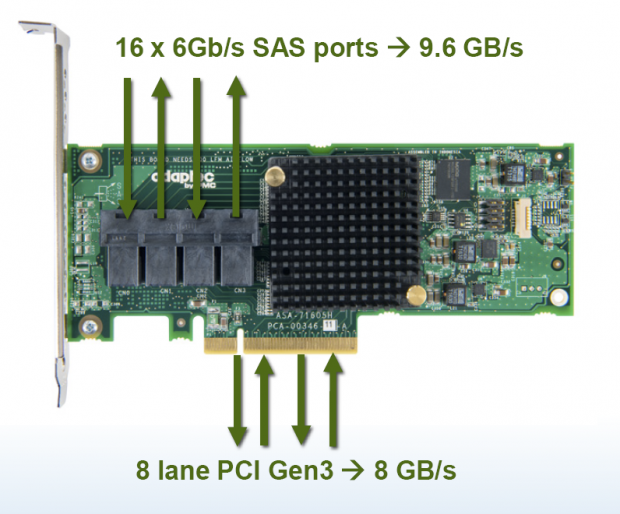 The key to packing all of the ports onto the controller is the progression from the standard MiniSAS connection to the HD MiniSAS specification. These cables provide a smaller connector, which allows 16 ports to be crammed into the limited PCB space.

MaxCrypto is a removable encryption key that plugs directly into the HBA. The key holds the encryption keys, and if there were an adaptor failure, reconstitution of the data simply requires pairing the key and the drives with another Adaptec HBA.

This new solution is the first application of encryption in the HBA market. This provides an extra layer of data protection in a number of scenarios. The physical key is advantageous, removing the need for key management expertise or software. From a pure data protection standpoint, this feature will provide some ease of mind from data theft.

This protection also comes into play when drives are retired. Many times retiring drives requires extensive overwrite operations followed by physical destruction of the drive by contractors. These steps ensure data destruction, but can incur additional OpEX expenses. Retiring encrypted drives is simpler; the encoded data is worthless without the encryption key. This eliminates lengthy overwrite sessions and drive destruction expenses.

Series 7H and 7He 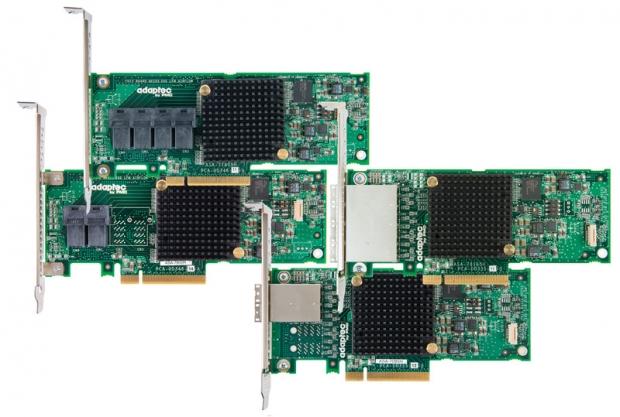 The Series 7H adaptors feature both external and internal port versions, with either two or four ports. These SFF-8643 connectors enable the only 16 native port LP MD2 HBA on the market. 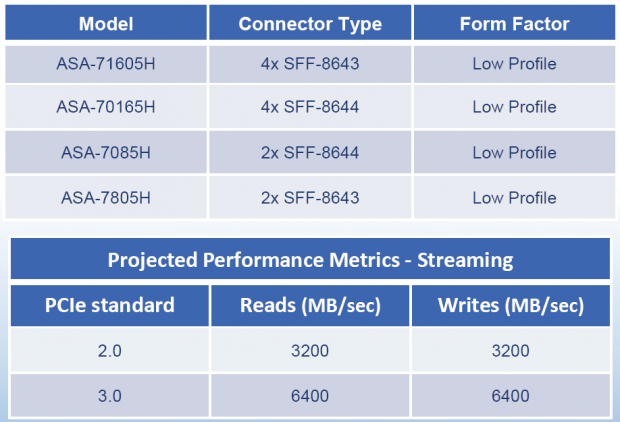 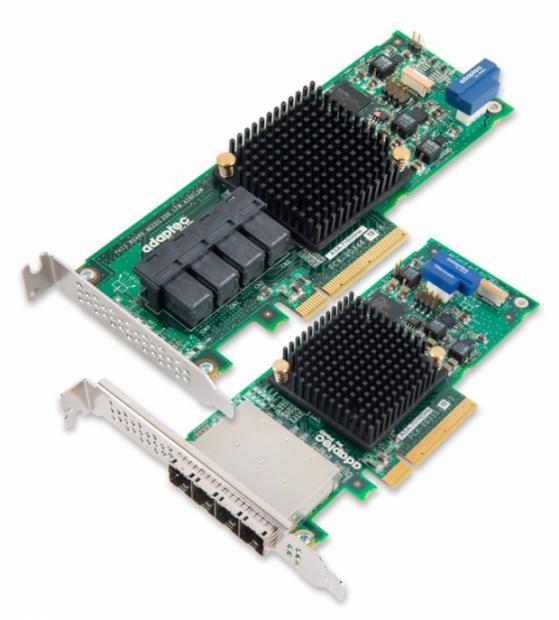 The 'e' in the 7He stands for encryption, which is the key differentiator for these two HBA's. These are the industry's only encrypted HBA's.

The 16 port PM8019 powers this controller and provides the MaxCrypto engine encryption. An optional line-speed enabled hardware encryption key is also available. These controllers also feature the same speeds listed above, with 1 million IOPS with the 512B block size and 800,000 IOPS with 4K blocks, and 6400MB/s in sequential read and write speeds. 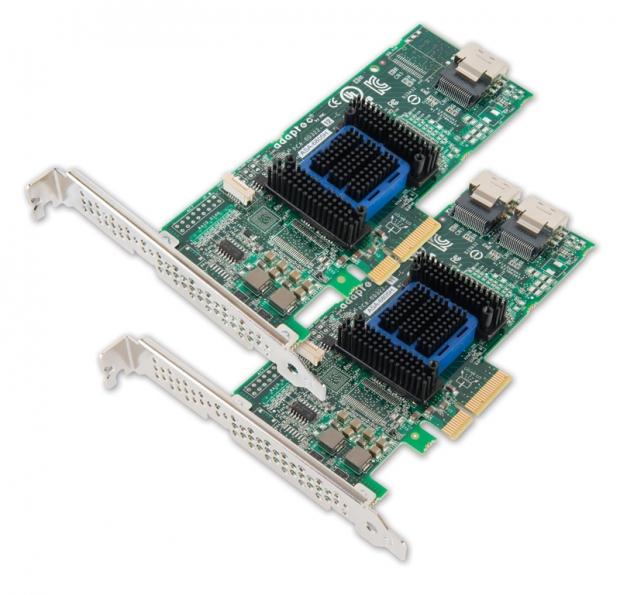 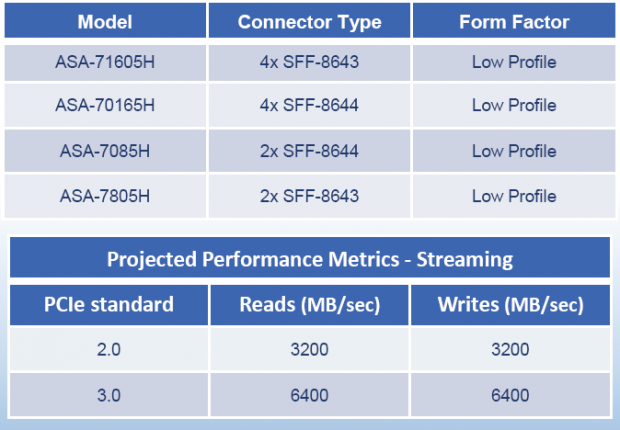 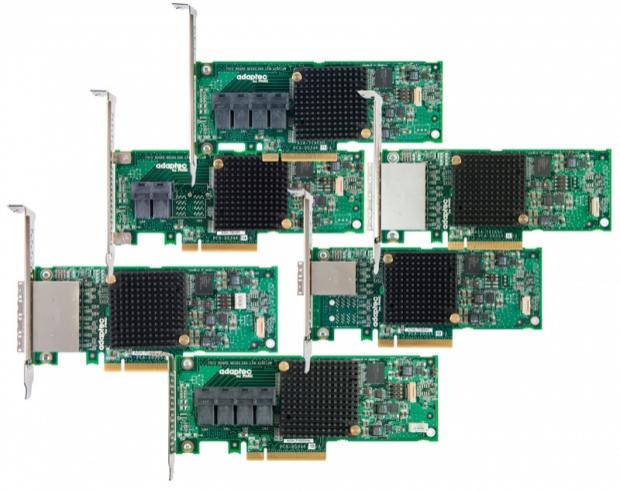 We have been witnessing a gradual migration in the server space to quad-node and slim form factor compute-dense solutions.

Perhaps more important is the new paradigm that is being created by the behemoths of the Information Age. The Facebook Open Compute Project is a perfect example of companies defying conventional solutions and defining the shape of the future datacenter. The Open Compute initiative initially involved companies sharing server designs to help companies deploy solutions unhampered by the limited options provided by hardware vendors.

This has literally changed the shape of Facebook datacenters, with over half of all servers employed in their datacenters being custom built by Facebook. Facebook has taken this a step further and have announced that their new 290,000 square-foot datacenter in Sweden will feature 100% Open Compute designed servers. Facebook is merely leading this charge, and to the dismay of OEM vendors, others are beginning to follow suit.

This shift in server design towards high-density and custom deployments is creating a burgeoning market for HBA solutions that did not exist a scant few years ago. Microsoft has already begun a transition from RAID controllers to HBAs in all of their server farms, so the market is certainly ripe for the picking.

Pricing will be key for this new family of devices, and we are not privy to the price structure at this time. Another key for success is going to be reliability and compatibility. Adaptec has addressed the compatibly issues by testing compatibility with 25 leading vendors for servers, enclosures, motherboards, drives and software. The product line was tested with over 300 disk drives, systems and other devices.

The potential for large gains in density is one of the defining attributes of this generation of HBAs. These controllers can literally provide double the density of the competition. The only caveat is that in order to provide that density, Adaptec has to make the jump to HD MiniSAS, a year earlier than the competitors are. This can be a bit of a gamble, as this new type of cable is going to carry a price premium until fully adopted into the enterprise space. This will lead to higher cabling costs, but with such high-density gains, particularly in the smaller server racks, many will be willing to shoulder that price.

Infusing maximum performance, up to 800K random 4K IOPS and 6400MB/s in throughput, into the new HBA family creates a combination that Adaptec feels will provide an advantage in high-performance SSD deployments. General availability for these controllers will come shortly, and we look forward to a full product evaluation on our TweakTown enterprise test bench.