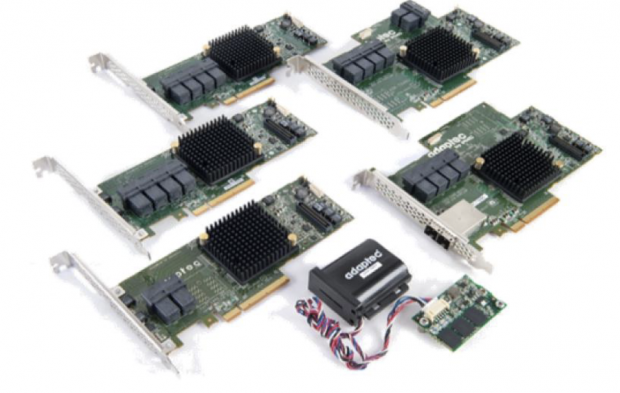 Adaptec has announced the Series 7 family, a new line of 6Gb/s RAID controllers that extends Adaptec into the PCI Express 3.0 realm.

Adaptec was acquired in 2010 by PMC-Sierra, a semi-conductor developer. Soon after the merger of the two companies, Adaptec launched their 6 Series of RAID controllers and adaptors. The 6 Series of controllers were designed before the resources of PMC-Sierra were brought into play. The Series 7 products are the first generation of controllers from Adaptec that reaps the benefits of their merger with PMC.

The technology that propels this new generation is the PMC PM8015 ROC. This new ROC is the meat of the story, as it is the first native 24-port ROC. The key to this is that there is no expander needed to connect up to 24 devices. This allows for lower price points and less complexity in the design, not to mention that it will provide for much higher densities in deployment.

The 24-port ROC allows for up to 16 SAS ports with the MD2 small form factor and of course 24 ports in the full size card. In order to cram enough connectivity onboard these small cards for the plethora of available ports, Adaptec is transitioning to the HD MiniSAS specification one year early. Most companies are waiting for the 12Gb/s generation to make the transition and Adaptec feels that this will put them a full year ahead of the competition in instituting the switch to HD MiniSAS.

The new PM8015 also delivers specifications that are simply exciting with up to 6600MB/s or 6.44GB/s in throughput and 450,000 IOPS in random access (4k). Pricing hasn't been announced yet, but prices are projected to be competitive with competing solutions. Full availability for all of the product family will be in October.

We expect to have in some silicon for testing well before that, but first let's take a look at the entire line-up and some other unexpected functionality that these controllers bring with them. 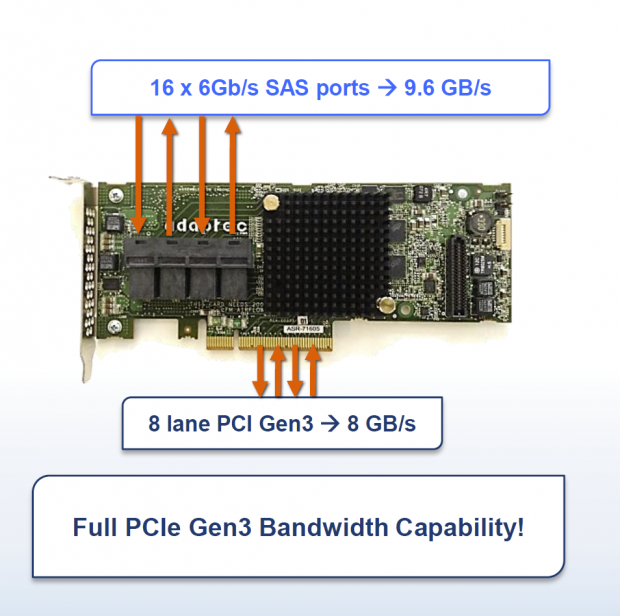 With all 16 SAS ports able to function at full speed, the end result is that Adaptec will have the capability to saturate an x8 PCIe 3.0 connection with full bandwidth. The 8GB/s provided by the x8 PCIe 3.0 connection is before the overhead and other calculations are taken into consideration. After overhead, this leaves us with the 6600MB/s (6.44GB/s) of bandwidth that the controller will deliver. 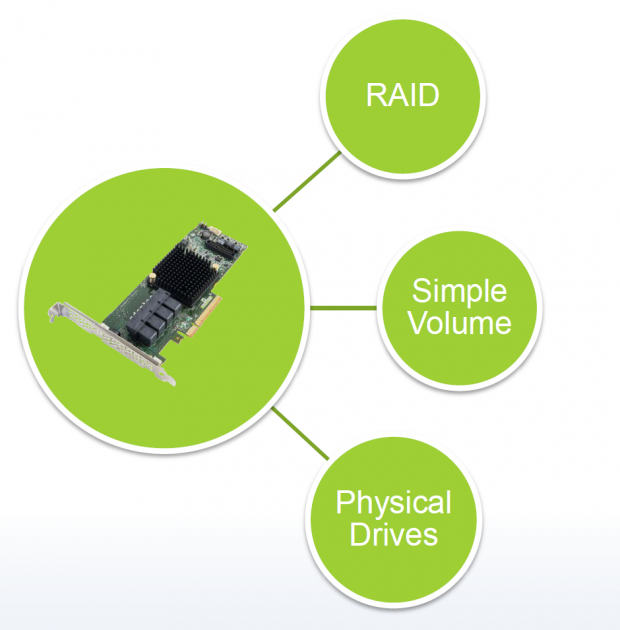 Another new function that Adaptec feels will be very popular is the addition of the "One Click Setup". This adds ease of configurability, with the option for automatic setup for both physical and logical volumes.

Three configuration modes will be available with this series of controllers:

Physical drive mode: This configures the drive in a pass-through configuration, much like an HBA. There will be no addition of metadata to the drive and no use of the DRAM caching.

Simple volume mode: This allows the drive to utilize the DRAM caching and configures metadata onto the drive. This is a value added proposition that gives HBA functionality with DRAM caching and the protection of supercaps.

RAID: Provides the full set of options for manually configuring all RAID parameters. 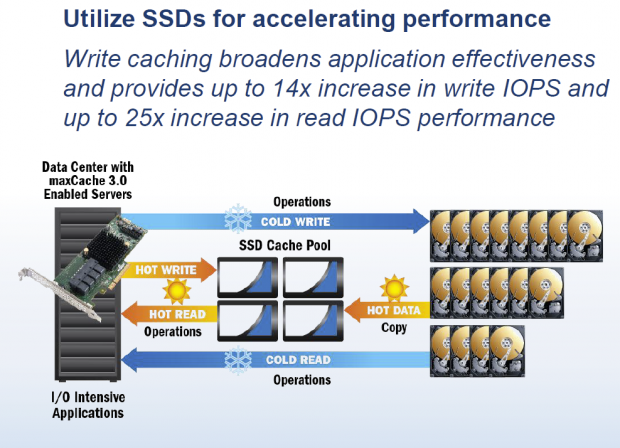 MaxCache 3.0 allows for caching of large HDD volumes in an SSD cache pool. Adaptec has also expanded MaxCache to introduce protection from SSD failure via redundancy with RAID 1 and RAID 5. 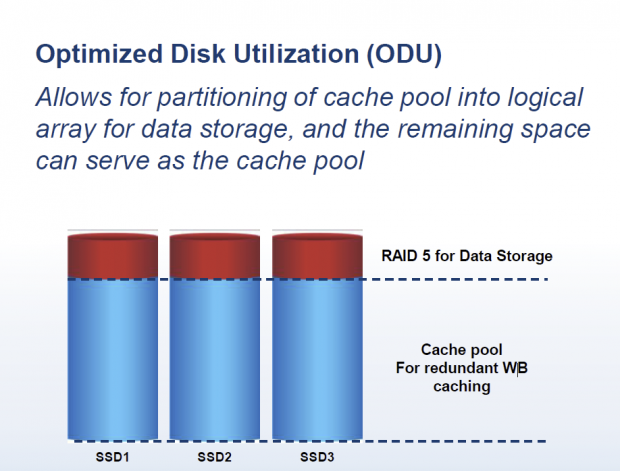 This new approach of forming a cache pool allows for much more flexibility when configuring the attached flash. This interesting approach will help to maximize the investment in flash-based solutions by also allowing the pool to have usable volumes or even boot volumes. This could allow for some interesting tiering configurations as well. 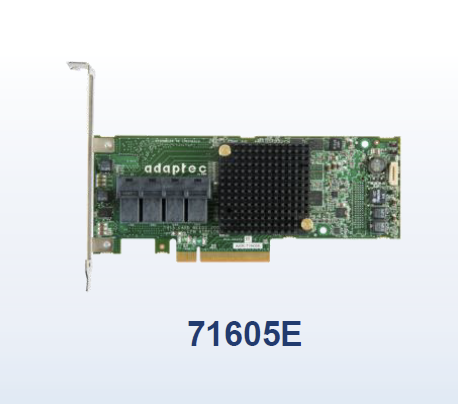 The 71605E is the entry-level product, which has RAID 0, 1 and 10. It does not support parity RAID sets and there is no Supercap protection solution available either. This controller also only features 256MB of DDR3 cache onboard, whereas the full featured cards have 1024MB of DDR3-1333 DRAM.

The 71605 and the 7805 are the full featured variants of the controllers in that small MD2 form factor. Adaptec is hoping that the 71605 will reinvent what to expect from a low profile solution. Using the HD MiniSAS cabling increases density remarkably in conjunction with the PMC ROC and this results in simpler cabling, lower cost and better performance. 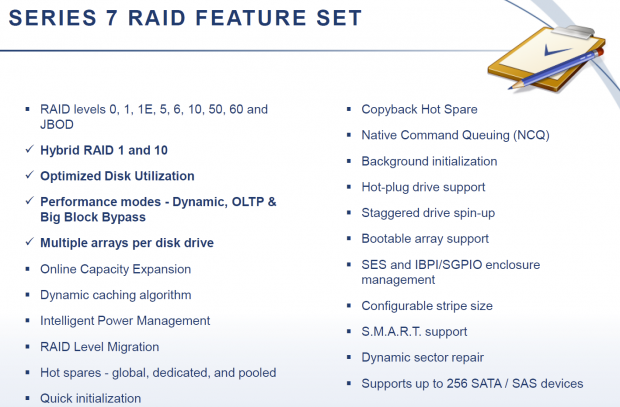 The Series 7 features a robust RAID feature set and these specifications apply to the full height cards as well.

The full height 72405 allows all 24 ports to be brought to bear in direct attach, without the use of an expander. It is of note that even though these are full height, they are still only half-length, keeping the footprint as low as possible for deployment.

This graphic details the connection schemes and form factors for the entire product family. 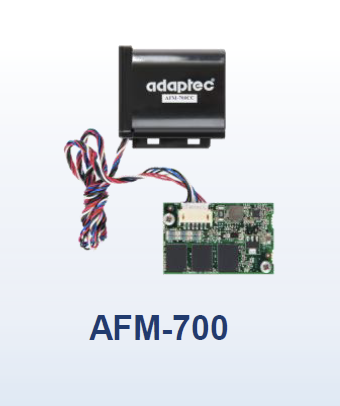 The AFM-700 is a Supercap with attached NAND. This will flush all cached data to the onboard NAND in the event of a power loss.

There are a few new features worthy of note with these Supercaps, one being an attached temperature monitor. This will allow the administrator to monitor the temperature of the capacitors and the environment of the RAID controller, remotely.

These Supercaps are rated for a five year lifespan at high temperatures and the lifespan can be even higher in lower temperatures. An important new feature is the ability for a full measure of the NAND and Supercap health without discharging. Many competing solutions require full power discharge to determine the remaining life. This requires the DRAM caching to be taken off-line for extended periods of time during the process. This can lead to interruptions in the speed of service. Adaptec looks to avoid interruptions with this new technique.

The launch of the new Series 7 from Adaptec consists of many firsts for the storage industry. The PM8015 allows for the industry's only PCIe 3.0 low-profile/MD2 form factor with 16 native ports and the only 24 native port full height solution. This is also the first set of publicly available controllers that will fully saturate the PCIe 3.0 bus, offering 6600MB/s or 6.44GB/s of throughput in addition to 450,000 4K IOPS.

The potential for large gains in density is probably one of the defining attributes of this generation of RAID controllers. These controllers can literally provide double the density of the competition. New approaches to power loss management and volume configuration are nice additions, but once again, we come back to the improvement in density. For applications with passive backplanes, these controllers can provide double the density. This can result in lower power consumption through the lack of both integrated and external expanders.

The only caveat is that in order to provide that density Adaptec has to make the jump to HD MiniSAS a year earlier than the competitors are. This can be a bit of a gamble, as this new type of cable is going to carry a price premium until fully adopted into the enterprise space. This will lead to higher cabling costs, but with such high-density gains, particularly in the smaller server racks, many will be willing to shoulder that price.

General availability for these controllers will come shortly and we look forward to a full product evaluation on our enterprise test bench soon. Stay tuned!