Since the last time we last took a look at the 'Guide to Buying Blu-rays from Overseas' in August, the Australian dollar has surged in value and in the last month has achieved something that I've not seen in my lifetime; parity with the U.S. dollar. That is, one Australian dollar equals an American dollar.

As someone whom has been importing DVD and Blu-ray titles for years, this is quite an amazing time. Couple that news with the pre-Christmas price cuts that the likes of online retailers such as Amazon take part in, and this translates into quite the buying bonanza for Australian consumers. 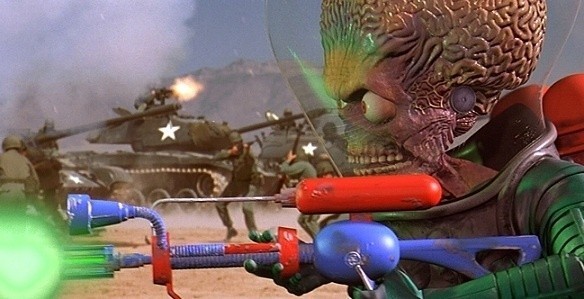 "Aaack aack!" With these two words, Tim Burton's crazy homage to 1950's pulp sci-fi sealed its place in my heart. 14 years later, it's still beyond me how exactly he managed to convince Warner executives to produce this film, but I'm sure as hell glad he did.

When Earth is visited by Alien marauders from Mars (grotesque creations from the controversial artwork of 1950's Topps collector cards), wonder soon turns to terror as they systematically destroy world leaders and landmarks. But Earth may actually have a secret weapon to stop them in their tracks, and in true Burton fashion it's as random and twisted as everything that comes before it.

The Blu-ray release is reasonably good, without blowing too many socks off. The video and audio transfer is decidedly improved over the DVD, released extremely early on in DVD's life in 1998. Those who have been there from the start might recall the old school cardboard case called the 'snapper'. It's unfortunate that despite the elapsed time, there have been no extra features added. In fact, it's completely bereft, without even a trailer, which I might add, the previous DVD release actually featured. Still with solid sales, there's hope that Warner might revisit the disc sometime in the future.

Continuing the pulp sci-fi theme, we have the 1950s classic Forbidden Planet. Released at a time when nuclear tensions were high, and the notion of travelling to the moon and beyond was just a pipe dream, but imaginations were rampant, Forbidden Planet showed audiences what the future could hold.

Younger audiences whom are only familiar with Leslie Nielsen in comedy roles will marvel at the much younger version of the man playing the straight role. But the standout actor is undoubtedly Robbie the Robot, who is just as technically useless as he always was.

Warner Brothers have gone overboard with attention to this release, bestowing it with not only an amazingly restored video transfer (which looks none of its 50 odd years), but a veritable treasure troth of extras. Whilst the film is rather camp and very tongue in cheek, modern sci-fi fans should definitely give this one a look.

It's fair to say that I don't watch much television these days; I just don't have time to invest in ongoing seasons of up to 13-odd hours of the same characters and concepts. But Modern Family is different. Its combination of perfect casting, great scripts and divergent social values make this one of, if not the best sitcoms on Television today. I think the secret is the presentation of the show - free of the canned laughter that so permeates most American sitcoms, Modern Family has embraced the faux documentary style of shows such as The Office and lets the audience choose what they find funny.

Whilst Australian fans can only purchase the DVD release of the shows first season, importers can pick up the 3 disc Blu-ray release for a small additional cost and they'd be wise to do so. Filled with some fantastic extra features including gag reels and featurettes, Fox have gone the distance for fans, and as such they should definitely respect the gesture. 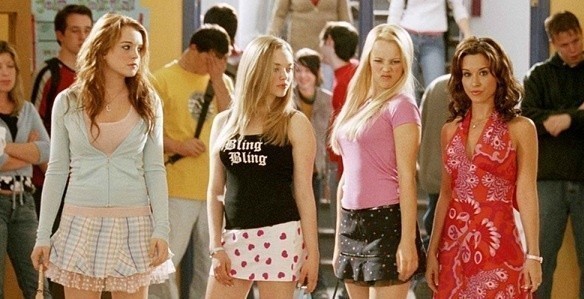 Six years on, Paramount's young adult comedy has lost none of its bite - it's every bit as hilarious as I remembered it to be. The script is still whip smart, with a hint of edginess that is not lost on its audience. Marvel too at a time when Lindsay Lohan was cute, funny and maybe even respected.

Lohan plays Cady Heron, a formerly home schooled student whom has spent her formulative years in Africa with her zoologist parents. When they move to the United States, she finds it somewhat difficult to adapt to the social networks of cliques of the education system. But the sparks really fly when she is chosen to join 'the plastics'; a bitchy and exclusive club of girls whom have the boys (and even some of the teachers) at their feet. But all hell breaks loose when they turn on themselves, with hilarious repercussions.

Owners of the previous DVD release can probably give this one a miss, with Paramount not taking the opportunity to add any further supplements, with only enhanced picture and sound quality the justification to upgrade. But if you are like me and have never owned the film; the bargain basement price should be easy to convince.

So until next time folks, that's all from me. Be sure to come back later this month for another round up.