We've been playing around with our various GPUs here in the TweakTown VGA labs in the past few weeks, throwing them into battle against each other in various combinations. First, we started playing around by using an AMD-powered system with the AMD FX-9590 processor. We thought we'd play around with some Radeon GPUs, so we tested out the Radeon R9 290X 8GBs in Crossfire against the Radeon R9 295X2 dual-GPU card. 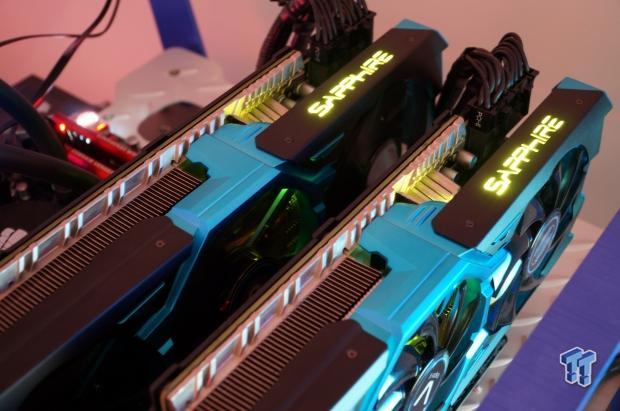 For our second test with the AMD CPU powering the system, we wanted to see how two NVIDIA GeForce GTX 980s in SLI would go against two Radeon R9 290X cards in Crossfire. Both of these tests were performed at 4K, so where can we go from here? Before we begin our testing with the Intel Core i7-5960X when it gets here in the coming weeks, we thought we would see how we'd go by really pushing the in-game details up to their maximum, and pitting all three set ups against each other. Oh yes.

For this test, we're running:

For our previous testing, we were running most of the games at 4K with their in-game settings maxed out, sans AA. Most of the time, except for GRID Autosport we left the AA disabled as there's just no point. But now, we're back and we're making these cards sweat. We're turning up the AA to absolutely maximum, and in some games we're enabling 200% supersampling, which at 4K, is rendering it at an effective '8K' resolution. Yes, 8K. 7680x4320.

Here's how we've got our in-game settings:

As you can see, our two last tests in Middle-earth: Shadow of Mordor and Battlefield 4 are running 4K with 200% supersampling, which is doubling the rendered resolution to 8K, or 7680x4320. It's intense, and it's going to show just how much that additional VRAM on our SAPPHIRE Radeon R9 290X 8GB Vapor-X cards is going to help out. It'll also give us an indication of where things are going to go in the next few years when 4K becomes somewhat of a standard (maybe not for PC gaming, but for VR gaming it will) and then 8K and beyond (where VR will be going).

When it comes to actually playing at 4K with 200% supersampling, the best one to do that with is our real-time benchmark with Battlefield 4. Out of the three setups, the SAPPHIRE Radeon R9 290X 8GB Vapor-X cards really smashed it, with more playable frame rates. 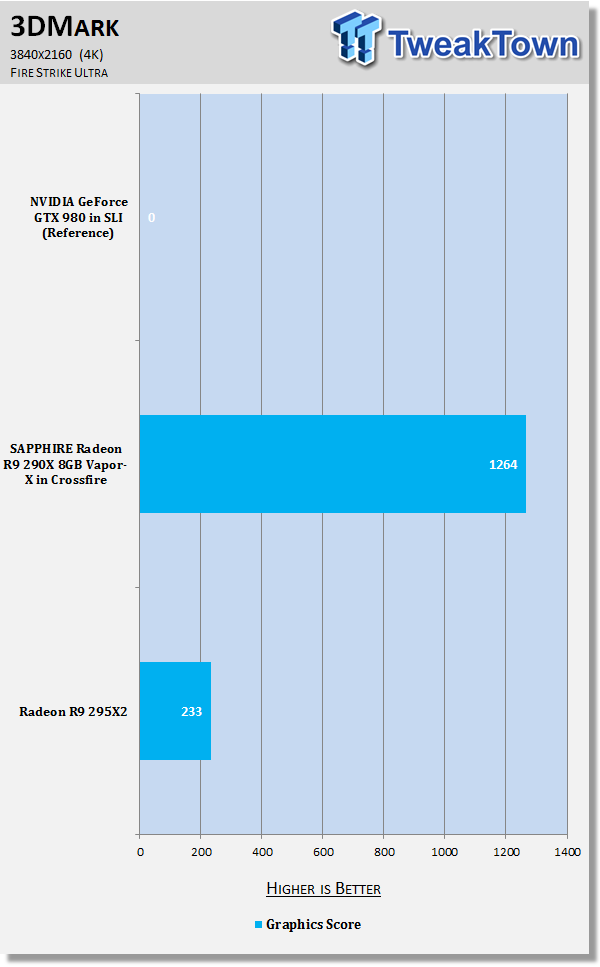 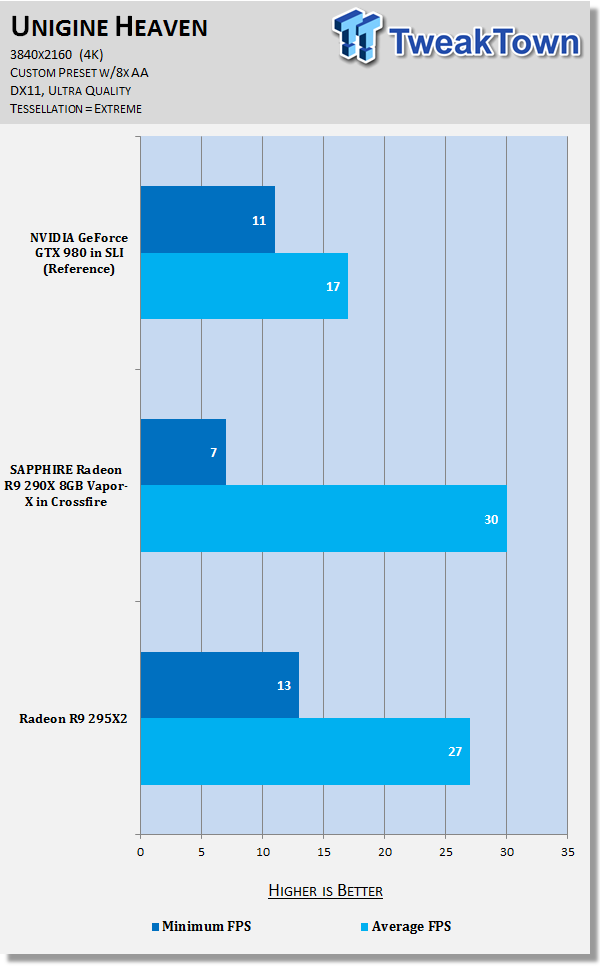 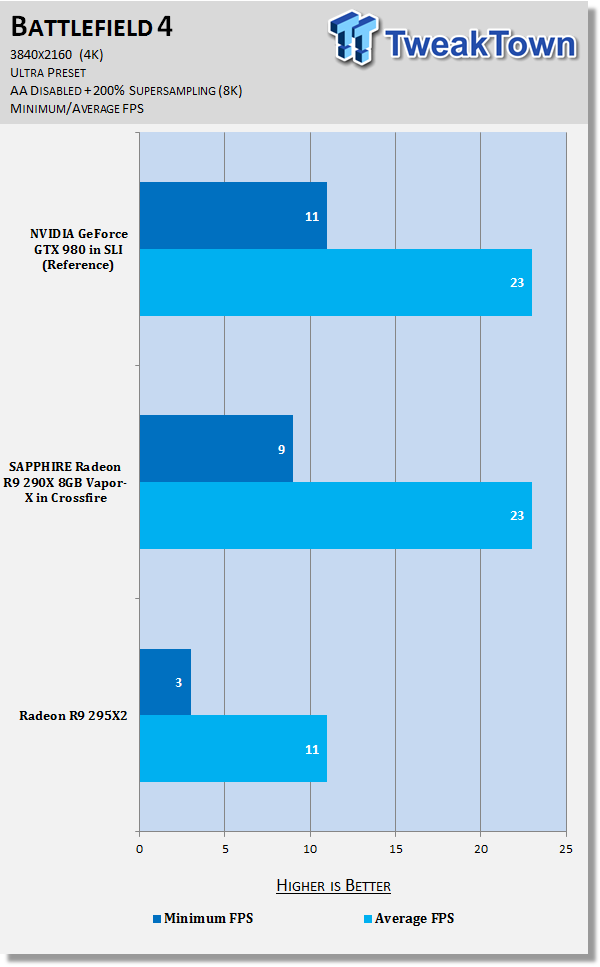 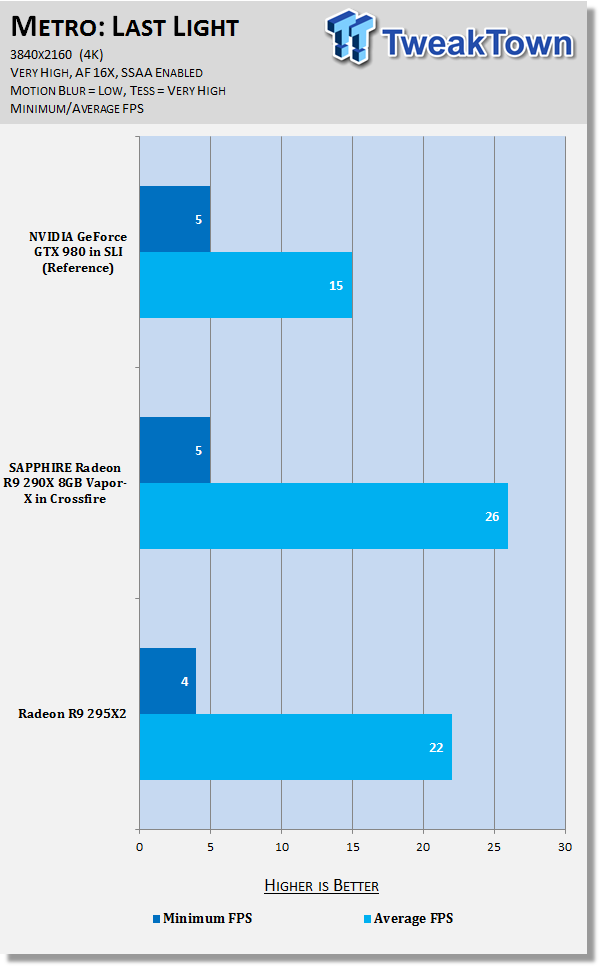 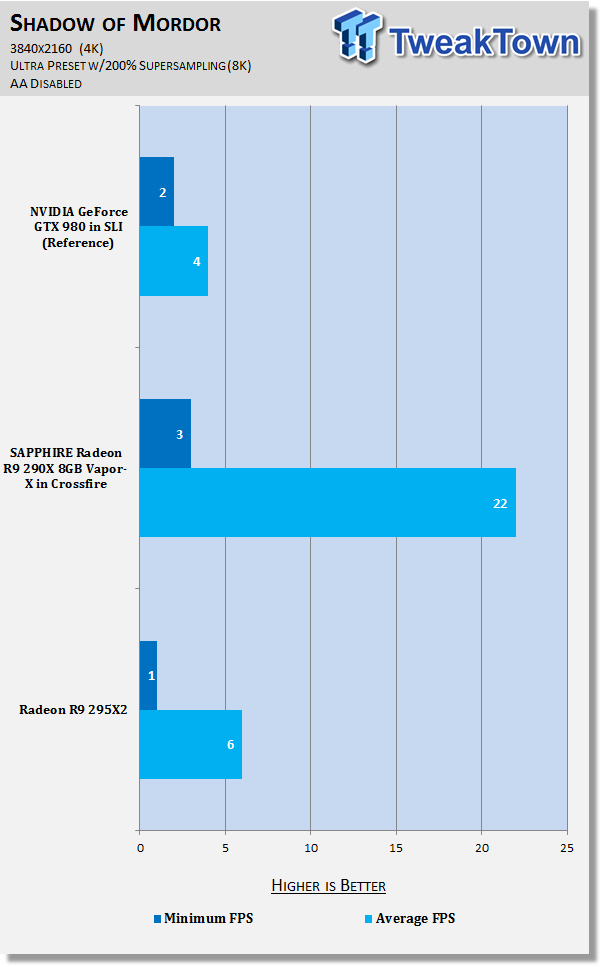 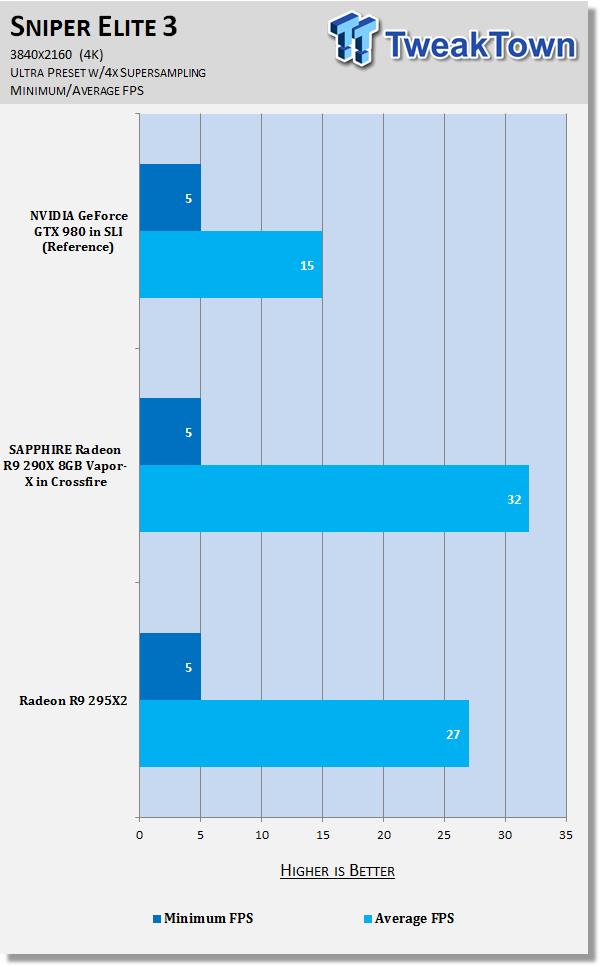 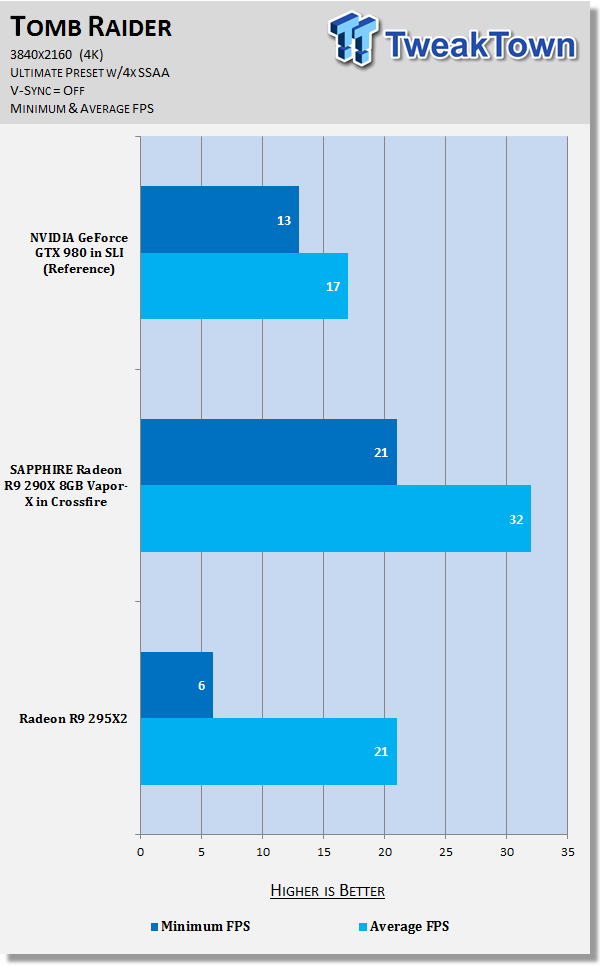 How do you think it went? Out of all the tests, I thought the 200% supersampling in Battlefield 4, rendering an effective 8K resolution, would've seen the SAPPHIRE Radeon R9 290X 8GB Vapor-X cards far out and ahead of the competition, but they weren't. Tears.

In Battlefield 4, I expected the GTX 980s in SLI to be demolished because of their VRAM, but that wasn't the case. The GTX 980s scored the identical average frame rate that the Radeon R9 290X equipped with 8GB of VRAM did: 23FPS average. The dual-GPU card didn't do so well, with the Radeon R9 295X2 scoring just 11FPS average.

Metro: Last Light is another harsh game when its AA is enabled, with the R9 290Xs with 8GB of VRAM beating both of the other setups.

Sniper Elite 3 is another game that surprised me, where the 8GB of VRAM came in handy once again at 4K with 4x supersampling. The GTX 980s in SLI managed 15FPS average, while the R9 290X 8GB cards scored 32FPS, leaving the Radeon R9 295X2 with 27FPS.

Tomb Raider joins that surprise Anthony club, with the GeForce GTX 980s in SLI scoring 17FPS average at 4K with 4x SSAA enabled, while the Radeon R9 290X 8GB cards doubled that, with 32FPS leaving the R9 295X2 with 21FPS, beating out the two GeForce cards. 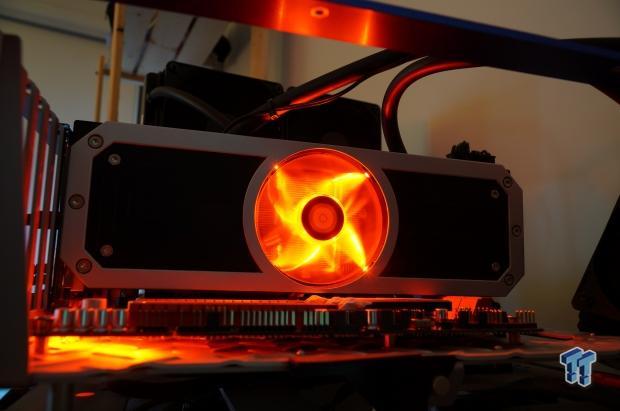 At 4K, you don't need 8GB of VRAM, it's as simple as that. But when you start moving above that and using 8K, or 7680x4320, you really need much more than 4GB of VRAM. 6GB of VRAM would be good, but 8GB of VRAM or more is ideal. During our testing, Battlefield 4 was using around 5.6GB of VRAM, while Shadow of Mordor was pushing 7.9GB of VRAM - filling the entire 8GB of VRAM.

We won't see 8K on the desktop side of things for a little while yet, but it is coming. What we're going to see first, is virtual reality headsets adopting 4K and beyond much quicker. We could see 8K on VR headsets as early as 2016, which isn't that far away. For PC gamers, 8GB of VRAM isn't needed and I would not recommend 8GB of VRAM to many people. There's only $100 or so difference between the Radeon R9 290X with 4GB and 8GB of RAM, so if you're at that point and don't plan on upgrading for quite sometime, then it might pay to grab the 8GB of VRAM.

4GB of VRAM is enough right now for every single game on the market, but there are some new games coming out this year that could push those boundaries. For now, 4GB is enough - you have nothing to worry about. But what we have here is an interesting look into the future of hardware and gaming, where 8GB and beyond is going to be a very big deal.