We found 10 items for the tag: VOLTA

NVIDIA ushers in Volta GPU for Quadro with the Quadro GV100, which now packs 32GB of HBM2.

NVIDIA's new DGX-2 is an absolute beast, packing some of the world's best technology.

NVIDIA expected to unveil its next-gen Volta GPU architecture at GTC 2017, between May 8-11.

NVIDIA will shift from 16nm to 14nm for its next-gen GPUs, which will be made by Samsung.

ARTICLES
HBM2 Graphics RAM Isn't the Hero We Deserve... Yet

We chat about High Bandwidth Memory and how NVIDIA has shown that we don't need HBM2 graphics card RAM technology in the near future. 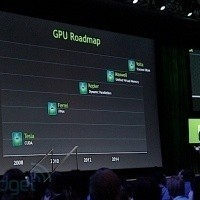