We found 25 items for the tag: TWIN FROZR

MSI doubles the memory on the new Radeon R9 280X to a massive 6GB! We see just how it goes today under our tests with our regular set of apps and games.

We take a look at our first non-reference cooled Radeon R9 290X to hit our labs. Let's see just how this new model from MSI performs.

We get a chance to run a pair of new Radeon R9 280X Twin Frozr Gaming video cards from MSI together in CrossFire mode. Let's see how it performs.

The MSI Lightning video card series makes a return with the new NVIDIA GeForce GTX 770. Let's see just what it can do - we're expecting good things.

We've been working our way through the MSI Twin Frozr Gaming OC GTX 700 series video cards recently. Today it's all about the NVIDIA GeForce GTX 770 model.

We're checking out the new NVIDIA GeForce GTX 780 GPU in the form of the 3GB Twin Frozr Gaming OC Edition from MSI which falls under the new Gaming Series brand.

If I had to choose between a Galaxy- or MSI-branded GeForce GTX 660, which one should I buy?

NVIDIA's GEFORCE GTX 660 has officially launched. We take the Twin Frozr option from MSI for a spin and see how it goes. 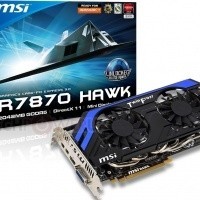 We check out the Twin Frozr based HD 7870 from MSI and see how it overclocks and performs today.

After looking at the newly released GTX 560 Ti-448 to select regions earlier in the week thanks to MSI's tricked up Twin Frozr III Power Edition, we now give it a solid overclocking kick to see where...

NVIDIA launch a brand new model to a few select regions. We check out the new GTX 560-448 to see what it's all about.

We check out the Power Edition HD 6950 which brings triple voltage adjustment to the table. How high can we go?

The latest 400 series video card from NVIDIA meets with MSI and its Twin Frozr II cooler we've grown to love.