We found 19 items for the tag: STEAM CONTROLLER

Valve is shedding Steam Controller inventory with massive 90% off discount.

Steam Controller can now be customized to make different types of button presses do different things.

Steam Controller's CAD files are public, lets gamers redesign it as they wish.

Valve has been trying to make its hardware 'more like software'

Steam just broke another record with over 12 million concurrent users worldwide enjoying Steam at any one time.

Capcom announces that Street Fighter 5 will include support for SteamOS and Steam Controller.

Valve is already tweaking the Steam Controller, with non-Steam game support on the way.

Alienware had some Steam Machines and the newly-released Steam Controller at PAX Australia.

Valve has finally introduced the Steam Controller, as well as opening up Steam Machine pre-orders.

Valve will see Steam blasted throughout your entire house with Steam Link.

Jaunt boss plays around with Steam VR at MWC 2015, walks away saying it was "utterly phenomenal"

Valve will be showing off the final design of the Steam Controller as well as the SteamVR hardware system at GDC 2015. 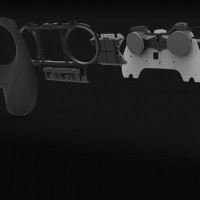 As expected, Half-Life 3 did not make a debut in this week's final announcement from Valve. It did, however, introduce us to the Steam Controller.