We found 4 items for the tag: PRESIDENTIAL ELECTION 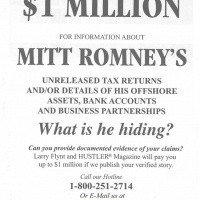 Larry Flynt, founder of Huster, wants dirt on Mitt Romney - is willing to cough up $1 million for it.