We found 14 items for the tag: HASWELL-E

GIGABYTE has upgraded its X99-SLI motherboard and introduced the X99P-SLI with USB 3.1, Thunderbolt 3, and more, all for a reasonable price.

Today Steve looks at overclocking Intel's first 8-core desktop CPU, the Core i7 5960X. If you need some help getting started with X99, take a look.

The rush is on for Haswell-E and X99 boards. Most of them support PCIe x4 lanes for M.2 high speed storage. It's what you need to take advantage of them.

Before its official announcement and reveal, Intel's Core i7-5960X processor has been spotted in newly leaked photos.

Intel to launch the next-gen Core i7-5960X and the rest of the Haswell-E parts in mid-September.

The new Haswell-E HEDT processors lineup will be the first to support DDR4 memory.

Intel is bringing a lot of features for its desktop processor and chipset lineups.

Intel to release its Haswell-E processors earlier than expected, with an unveiling at Computex in June. 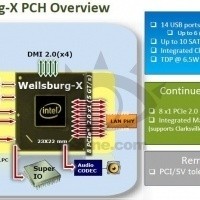