We found 30 items for the tag: COPPER

NEWS
Why are Bill Gates and Jeff Bezos paying millions for specific metals?

Billionaires such as Bill Gates and Jeff Bezos are paying millions to companies that are searching for these specific metals.

EK has introduced some rather compelling copper based liquid cooling kits into the market at a reasonable value. 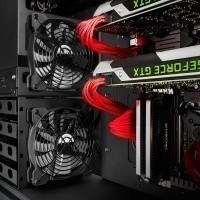 After ten years in the making, Digital Storm unleash the Aventum II.

SilverStone tries its hand at a very large passive cooler with a 95W TDP and with fans you can go up to 150W. Let's see what the SST-HE02 can do.

Prolimatech is going with the bigger is better theory with the release of its latest video card cooler, the MK-26.

SilverStone jumps in the twin tower CPU cooling game with some ideas of its own to dominate this segment by offering the Heligon Series HE01.

Now that we saw what their AIOs can do, let's move back to air cooling and see the Thermaltake Frio Extreme this time.

Spire tries to bring life to an old design and delivers the TherMax Eclipse III. Warning, it's not pretty.

Let us introduce you to be quiet!'s twin tower design, the Dark Rock Pro 2 CPU cooler.

Our introduction to be quiet! cooling is with the Dark Rock 2. Ride shotgun as we acquaint ourselves with them and their CPU coolers.

With a new test video card in the system, EK Water Blocks steps up to the plate to deliver the first full coverage GPU water block to test with my HIS Radeon HD 7950.

Xigmatek brings new life into an old cooler design with the introduction of the Dark Knight Night Hawk Edition.

Introducing the only cooler to currently offer vapor chamber cooling for CPUs, the TPC 812 from Cooler Master.

Phanteks delivers a C-style cooler to the lab for testing. Take a look at what the PH-TC14CS brings to CPU cooling.

Noctua drops into the low profile and low power CPU cooling segment with the release of the 95W capable NH-L12 CPU cooler.

After three months and a tedious battle, FrozenCPU.com stepped up and delivered the Thermalright Silver Arrow SB-E CPU cooler.

It took me a bit, but I finally got around to asking Zalman for the VF3000F Dual Turbine VGA Cooler for my GTX 470. Stick around and see how well it does!

There has been a lot of hype preceding the Icy Vision's arrival. Let's get down to the point and see what it is really all about.

Need help cooling one of NVIDIA's new nuclear reactors? The DD-GTX470 from Danger Den offers a solution to keeping your Fermi Under control.

A new revision of the Accelero from Arctic Cooling is about to hit the shelves. Come and take a look at what they are offering this time.

Their most impressive arrangement yet.