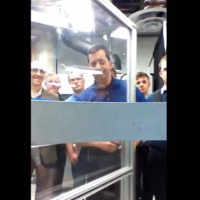 Microsoft beats everyone to the drop test, records video using the Surface tablet as it is dropped.