With the 2022 animated feature film adaption of the Nintendo franchise deep in production at Illumination, alongside the discovery of an extended workprint of the film, attention has once again returned to 1993's live-action Super Mario Bros. movie whose cult classic status has found audiences quietly re-assessing its attributes.

Down and out Brooklyn plumbers Mario Mario (Bob Hoskins) and Luigi Mario (John Leguizamo) are being squeezed out by the infinitely better financed and equipped, mafioso-like Scapelli company, when they meet archaeology student Daisy (Samantha Mathis), who is being antagonized by company head Anthony Scapelli. When Daisy is kidnapped by two goons, Iggy (Fisher Stevens) and Spike (Richard Edson), Mario and Luigi become embroiled in a multi-dimensional battle against a power-hungry dictator, Koopa (Dennis Hopper), and a plot to take over the world.

Described as a 'turkey' by respected critic Leonard Maltin, to "the worst thing I ever did" by its own star Bob Hoskins, it's obvious that Super Mario Bros. isn't quite the film it set out to be. Back in 1993, there were only a few rather simple 8-bit games in the series whose comparatively rudimentary elements ill-suited to hang a feature film on, which, not to mention, there had never even been an adaptation of a video game to a feature film before.

Behind the scenes was a rolling disaster, with daily rewrites, an unhappy cast, budget problems, and studio skirmishes, which culminated in husband and wife directing duo Rocky Morton and Annabel Jankel being removed from production before principal photography was complete, leaving other members of the crew to finalize it. But against all odds, the film got a lot right, too, and some are beginning to take another look at this strange little film. The casting of leads Bob Hoskins, John Leguizamo, and Dennis Hopper wasn't just totally appropriate - they were inspired.

The production design by David L. Snyder, which echoes his earlier subversive work on Blade Runner remains one of the last examples of large-scale set design before CG willed entire landscapes into existence. The animatronic Yoshi and Goombas are truly amazing, and the limited number of computer-generated visual effects shots still look pretty damn good. Whilst not uniformly successful, only the most jaded filmgoers can deny that there's something strangely loveable and undeniably appealing about the film - truly unlike any other, that's come since.

Represented by a mediocre DVD release in the United States by Disney, which has yet to be bested, Super Mario Bros. has been much better served in the United Kingdom by a 2012 Blu-ray release by Second Sight Entertainment which packaged several excellent bonus features, as well as providing the film with a new 2K remaster. The maiden release of the film in Australia from Umbrella Entertainment is based largely on that release, with one excellent addition (which I'll talk a bit more about later), as well as being the first Blu-ray release of the film in the world to be region free and playable worldwide. 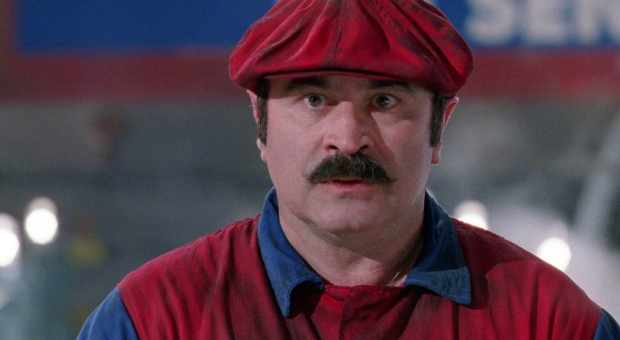 Super Mario Bros. is presented in its original aspect ratio of 1.85:1 and encoded with AVC H.264 compression.

The image is crisp, with a superb level of detail evident in almost every shot. Colors are bright and bold, with suitable cartoon pop in the primaries and plenty of varying gradients in the darker elements. Deeply saturated tones that occasionally border on over-saturation provided the barest hint of digital manipulation. The transfer has preserved a very fine layer of film grain, which, far from being intrusive, provides a gentle reminder that this was a time before digital production pipelines.

The source material has evidently been kept in wonderful shape over the intervening years, with only one or two film artifacts marring the image. The increase in fidelity reveals plenty of previously hidden details, especially in the fabulous production design and on the intricate make-up effects. Sure, there's the occasional downside; look out for the aliasing on some of the elements in the opening CG 'dimension' animation (a tell-tale sign of being rendered at sub-HD resolution), but such deficiencies are inherent to the film's production and a part of its charm.

Overall, this is a very solid transfer that captures the film in a quality that surpasses the original theatrical prints - what a time to be alive. 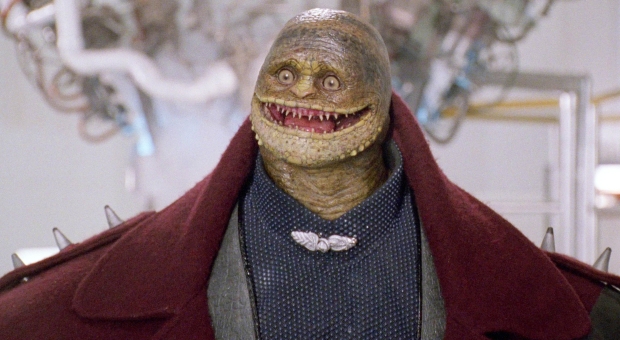 This is a decent yet somewhat pedestrian audio mix that doesn't have any real problems to speak of but won't really impress audiophiles - doing everything it needs to, but precious little more. Compared to Second Sight's UK Blu-ray, this edition does not include the 5.1 DTS-HD Master Audio, which seems like a deal breaker on the surface. However, that was a very poor attempt at a remix, with audio fidelity and general quality inferior to the stereo track.

A decent pro-logic or above audio amplifier does a decent enough job of playing the audio back for surround sound systems but won't be your next demo disc. 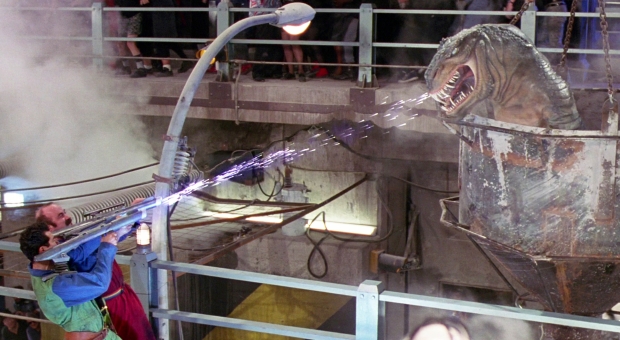 Umbrella Entertainment's Australian Blu-ray release not only ports over the collection of extra features from Second Sight Entertainment's 2012 Blu-ray but also bests it through the inclusion of an extended version of the film. Let's jump in.

The 2012-produced This Ain't no Video Game documentary reunites key members of the cast and crew, including (then) newly shot interviews with co-directors Rocky Morton and Annabelle Jankel, stars John Leguizamo and Richard Edson, producer Roland Joffe, writer Parker Bennett, production designer David L. Snyder and editor Mark Goldblatt to name just a few. With disarming honesty from all contributors, the feature is a fascinating and engrossing look at a production gone awry, which reveals behind-the-scenes stories that will bring a smile to the face of fans.

Next up is the original 1993 Making of' Featurette which is far more publicity oriented but still worthwhile for some great behind the scenes footage, including the superb puppetry that brought Yoshi to life, as well as an interview with Bob Hoskins displaying barely concealed hostility as he explains that "he used to do Shakespeare". Finally, we have the film's theatrical trailer (in SD) and a collection of image galleries of behind-the-scenes photos and storyboards. 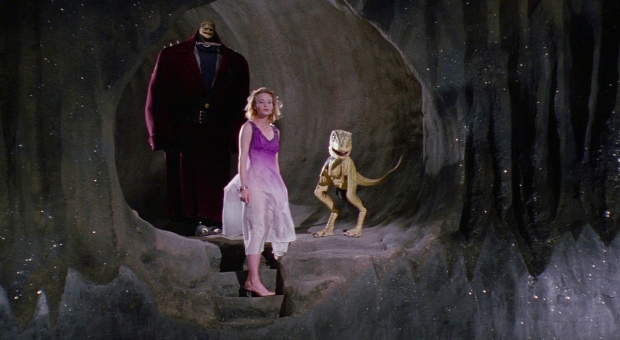 The big-ticket item for this release is the inclusion of a newly discovered extended workprint version of the film in its entirety. While only offered in scratchy, standard definition NTSC video, its very existence is fascinating, let alone that it's now preserved on a commercial Blu-ray release. The story is that the one-of-a-kind VHS tape came into collector's hands a few years ago when it was purchased in a liquidation sale of production company Lightmotive's assets at auction. Featuring 20 minutes of never-before-seen footage, including deleted subplots, characters, Dinohattan beasts, and even a rap song (!), the extended cut is a weird and wonderful insight into an earlier cut of the film.

Overall, this is a superb collection of bonus features that will enhance the film's cult status. Props to Umbrella Entertainment for going the extra mile to include the extended workprint and not region coding the film, so fans worldwide can finally experience it in high definition.

Super Mario Bros is a flawed, but highly entertaining adaptation of the classic video game. This new Blu-ray is probably the best presentation it will ever receive.