Despite faults, the 4K debut of Star Wars: A New Hope is hands down the best it's ever looked at home and deserves a place in every 4K collection.

In the last 43 years, many millions of words have been written and opinioned about these legendary films, and much more eloquently and from writers much more talented than I. That said, it is my favorite film series, and I've already written about it for two previous video formats, so I've already come this far...

Young farmhand Luke Skywalker (Mark Hamill) dreams of a life away from the backwater planet Tatooine, and when a perfect storm of circumstances and chance collide, he becomes thrust into a desperate battle between the Rebellion and the evil Empire, which will reshape the galaxy and unveil his own destiny. 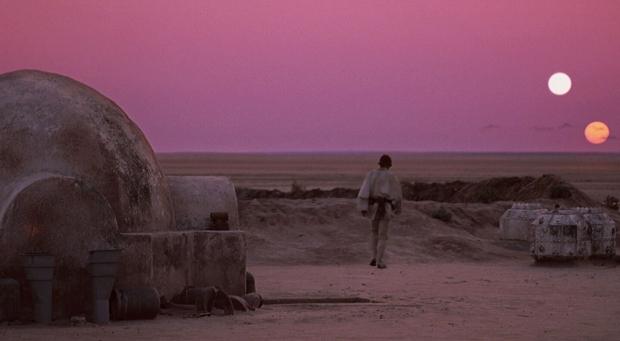 The first film in the nine-part Skywalker saga later dubbed A New Hope is a bonafide modern classic - the one that started it all and made the world fall in love with the sprawling vision of creator George Lucas. It's not the strongest film in the series (that honor goes to its sequel; The Empire Strikes Back), but naturally, without this film, that would not exist. Indeed, without A New Hope, the entire sci-fi genre would have a significant part missing. Not that we'd ever know.

Since its debut on home video in 1982, the release of Star Wars on successive home video formats has always been a momentous moment, signifying each was ready for prime time, with a consumer base sufficient to generate an economic return. Since the last big release of the series in 2011 for the fledging Blu-ray format (dubbed "The Complete Series"), a whole lot has happened in the world of Star Wars, with Disney's acquisition and the creation of five new feature films and the introduction of multiple TV series, including The Mandalorian - essentially doubling the library of Star Wars content.

During this time, there's also been a significant maturation of digital film preservation and restoration tools and, of course, a brand new physical disc format that has the capability to essentially serve as a replica of studio masters - finally, the holy grail for film collectors. So, how does the first film in the Star Wars series fare in its 4K debut? Let's jump in. 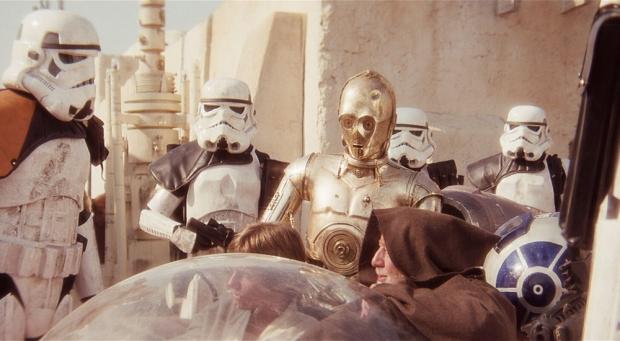 Star Wars Episode IV: A New Hope is presented in its original aspect ratio of 2.35:1, encoded with H.265 compression, and finished with a static HDR-10 pass.

The 2K Lowry Digital remasters assembled in somewhat of haste for the 2004 DVD and later reused for the 2011 Blu-ray have been swept aside, with this transfer coming from a newly assembled 4K digital intermediate from Reliance Media (Lowry Digital reincorporated) which represents a large leap in quality, along with new and improved color timing.

It should be acknowledged straight up that this isn't the original cut of the film released in 1977, but a culmination of the 1977 Special Edition version and changes introduced in 2004 and 2011. Naturally, there's also been a few additional changes for this 4K release, including some subtle digital nips and tucks, but most notably yet another tweak to the Solo-Greedo shot-out ("maclunkey!") and further adjusted laser blasts. As well as not offering the version of the film that die-hard fans want, at least for posterity, the Frankenstein-esque status of the film is also very relevant to the quality of this 4K transfer. Let me explain. 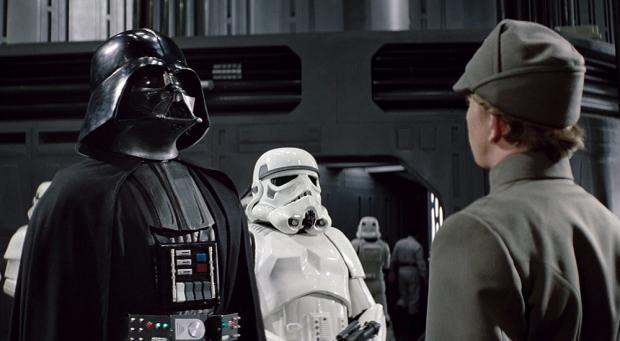 The 4K digital intermediate, which is essentially the new master 'copy' of Star Wars hails from a hodgepodge of sources, necessitated by the degradation of the camera negative discovered in preparation for the Special Edition, with some scenes assembled from lesser generation elements, as well as a number of elements that were digitally scanned with cutting edge (circa 1997) tools and new CG elements rendered out at sub 2K resolutions, with varying degrees of noise reduction baked in. Unifying elements created over four decades is no small task and introduces a ceiling in how good it can possibly look - and there is a price to be paid. But first, the good.

This is hands down the best that A New Hope has ever looked on home video, with a newfound richness and clarity to the image that's a real joy to behold. I'm not exaggerating to say that I noticed details that I'd never seen before, as well as a few goofs and set issues too. Colour balance is much more natural than the pumped-up saturation that plagued the Blu-ray most noticeably with improved skin tones, while the HDR grade provides a subtle but welcome boost to highlights. 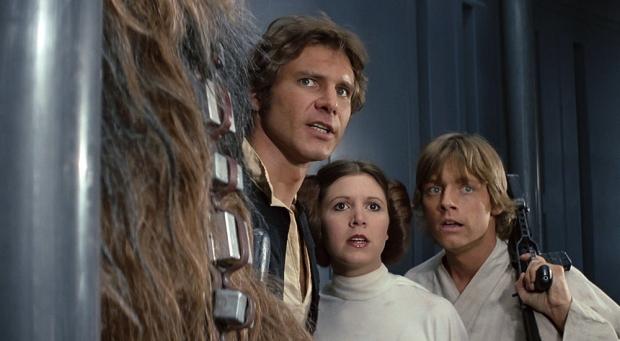 Ironically, while the majority of 1977 model shots look superbly sharp, many of the 1997 CGI looks increasingly soft and dated in comparison. Due to the fact that subsequent 2004 and 2011 CG revisions were bolted onto the now obsolete 2K digital 2K master, they've been newly re-rendered by ILM and don't suffer quite the same fate - although continue to stick out like a sore thumb. Still, some dodgy effects have been left well alone, and I'm somewhat surprised that George Lucas didn't feel the need to return to them, for instance, Luke's quivering Lightsaber blade while training on the Millenium Falcon.

Unfortunately, the Achilles heel of this 4K presentation is the introduction of digital noise reduction, which varies from minor to objectionable throughout. It's tough to be overly critical, as its application is almost certain to provide a more uniform visual look to the disparate elements mentioned previously. But I can't help but feel that there were a number of times where it bordered on egregious, accompanied by several instances of unnatural frozen grain. Some fans may be less sensitive to this than I, but it does need to be mentioned.

To be objective, this is Star Wars, and expectations are always set very high - perhaps higher than could be expected in these circumstances. All things considered, this 4K release is a stunning release than no fan can afford to be without. 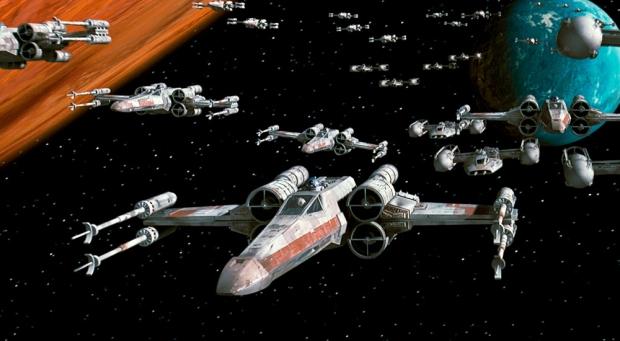 Taking the new remix prepared for the 2011 Blu-ray by LucasFilm sound mixer Matthew Wood which completely recreated the film's soundtrack from the original elements, and adding height information remains faithful to the original mix pulls back a veil to present the audio almost completely free of distortion and only held back by the limited fidelity of some of the original analog recordings.

Of course, A New Hope is never going to be a reference quality presentation, but those familiar with the way it has sounded over the years will be quite impressed indeed. Dialogue comes across quite clearly, and with only a few instances of overt distortion, belying its 43 years of age, John Williams classic score booms across the front soundstage and into the rears, while laser fire ricochets and pans pleasantly around the mix. Bass is perhaps a little lacking and not as detailed as would be expected from a modern mix, but from the opening shot, LFE rumbles appropriately throughout. 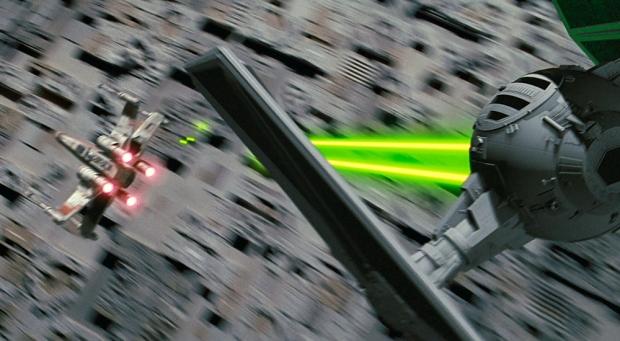 The collection of extra features for Star Wars Episode IV: A New Hope are dispersed over the two included Blu-ray discs. There are no extras to be found on the 4K disc, which means there is no option to watch the 4K disc while listening to the audio commentaries. Such is the prestige of Star Wars that thankfully Disney Australia has reversed their standard approach to 4K releases in this country and have bundled each title with not one, but two Blu-ray discs. This is a hugely welcome change, but I suspect a short-lived one.

The vast majority of features have been ported over from the previous Blu-ray release, except two brief featurettes, Conversations: Creating a Universe and Discoveries from Inside: Weapons & The First Lightsaber which amount to 11 minutes of footage, and a rarely seen alternate Launch trailer.

Returning are two audio commentaries return, the first featuring George Lucas and many members of the crew, including Sound Editor Ben Burtt and ILM staff, including the legendary Dennis Muren. In contrast, the second is assembled from interview comments and edited together in a fairly relevant and cohesive manner. The 26-minute long Anatomy of a Dewback featurette is the closest we get to a proper 'making of' documentary, which is strange since it was created to promote the Special Edition release and many other, stronger documentaries would have been a more appropriate inclusion. 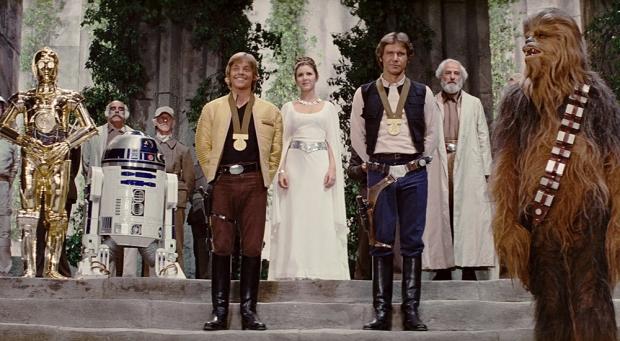 The 8 Deleted Scenes, which premiered to great fanfare on the Blu-ray, have carried over and are a real joy to return to. The total of 16 minutes of new footage includes the fabled Luke and Biggs scenes on Tatooine's Tosche Station, the original Cantina sequence with ropey prosthetics, and a brief extension to the scene Biggs before the battle of Yavin. These haven't been cleaned up at all and are in pretty bad shape, but they're an amazing treasure for long-term fans.

Next are a few brief Interviews segments, with principal actors Mark Hamill, Anthony Daniels, and Carrie Fisher. These are several years old and unfortunately cut too short to be of real value, while The Collection shows a few of the stunning models, costumes and creatures created for the film, with impressive 360 degree turns which show the immense detail the artisans went to. Some of the props have degraded pretty significantly but are still very good to see, and the ability to savor the detail in iconic models such as the X-Wing and TIE fighters are welcomed. Finally, The Archive is a brief look at the treasures contained in the sprawling Lucasfilm Archives.

While this is a pretty good collection of materials, it's a shame that many of the legacy bonus features from the 2004 DVD release have not been included, not to mention the earlier laserdisc extras, as well as the vintage 50-minute 'making of' from the Blu-ray box set. Worse, the epic two and a half hour Empire of Dreams documentary from the DVD set is also missing from all of these 4K releases, but can currently be viewed on the Disney+ streaming service in high definition no less.

Despite faults, the 4K debut of Star Wars: A New Hope is hands down the best it's ever looked at home and deserves a place in every 4K collection.