Coming off our review of the 2TB BX500, we switch gears to the flagship MX series with the fourth generation MX500.

The MX500 has been the flagship SATA solution for Crucial for several years, and in that time, the price has come down considerably. That said, when compared to the BX500 series, the MX offers an entirely different build starting with a Silicon Motion 2258 and hefty DRAM cache.

This is paired with Micron's 64Layer TLC NAND, but with a much larger 512Gbit die for the 2TB capacity. This is accompanied by a 700TB TBW endurance rating and 1.8 million-hour MTBF. As with many modern SATA solutions, the MX500 taps the top of 6Gbps mountain at 560 MB/s read 510 MB/s write. Random performance is rated at 95K read 90K write.

Crucial has outfitted the MX500 with several key features that aim to improve performance. The most notable is dynamic write acceleration that takes advantage of an SLC buffer like many drives, but rather than having a fixed size, the MX500 can grow or shrink based on drive state. 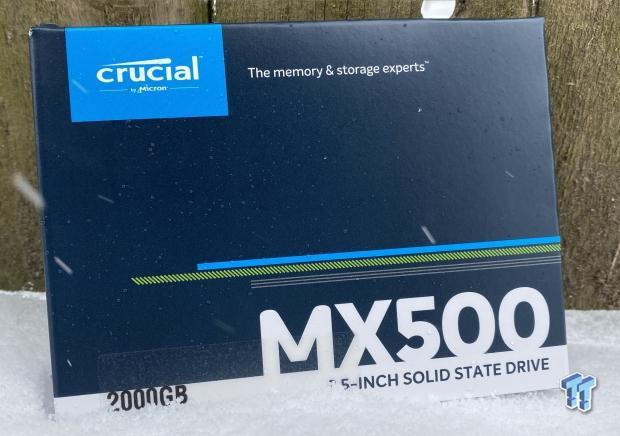 Packaging for the MX500 series offers branding and capacity on the left with model identification to the right, similar to the BX series. 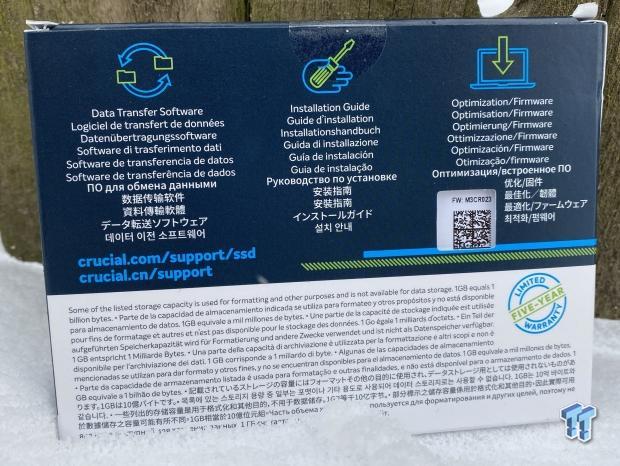 The back goes into more detail with support software and warranty information. 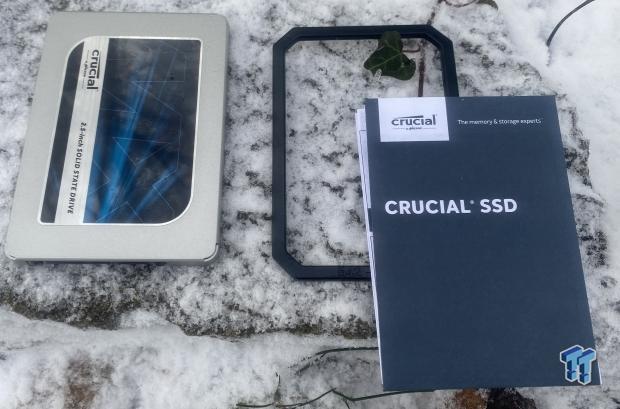 Unboxing, we have the drive and reading materials along with a z-height spacer for notebooks and caddies. 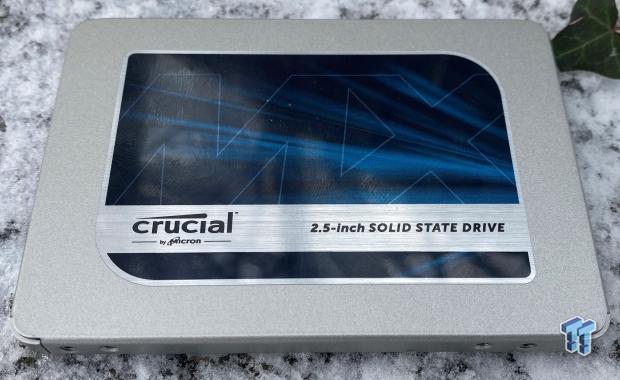 The MX500 sticks with the same drive design of past solutions in the same lineup. 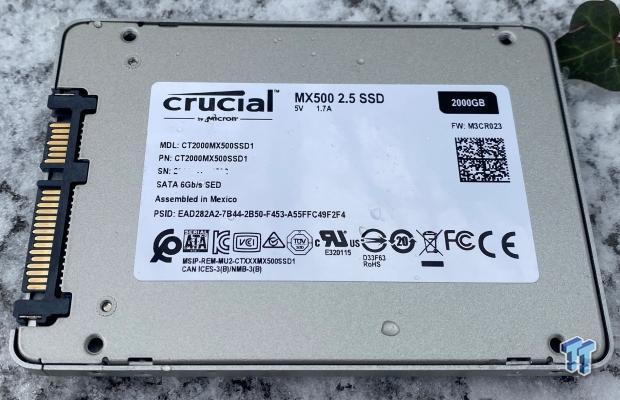 On the backside, we have the capacity listed to the right with identification in the middle next to branding. 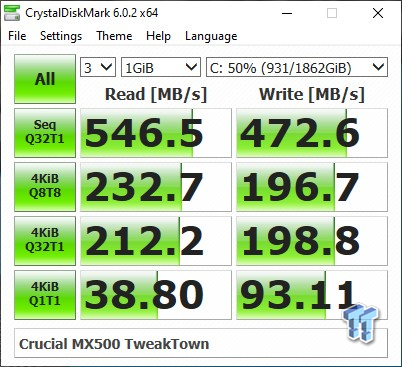 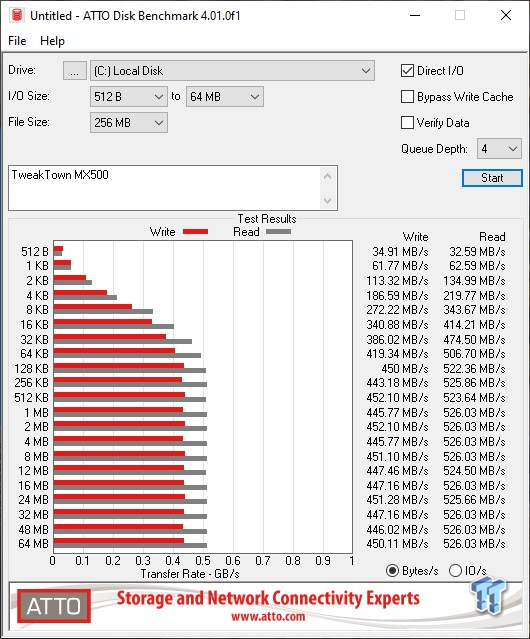 ATTO gave us solid performance read and write with peaks starting at 128K and on. The top performance here was 526 MB/s read and 450 MB/s write. 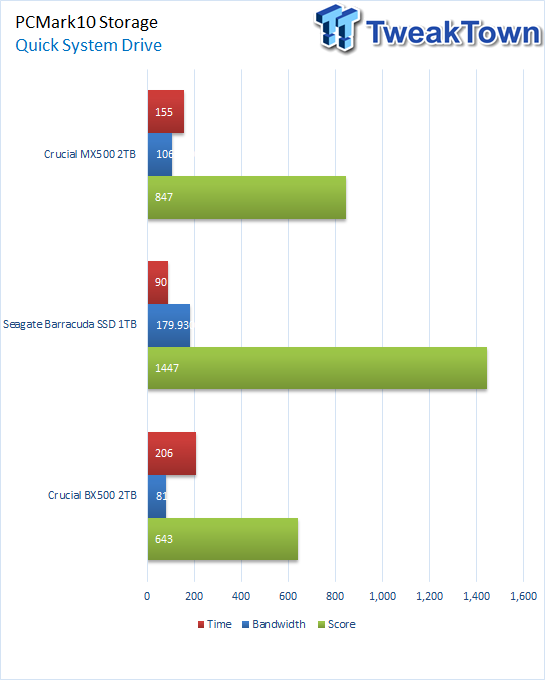 Getting back into PCMark10, the quick drive test offered a boost over the BX series with a score of 847 and bandwidth at 106 MB/s. 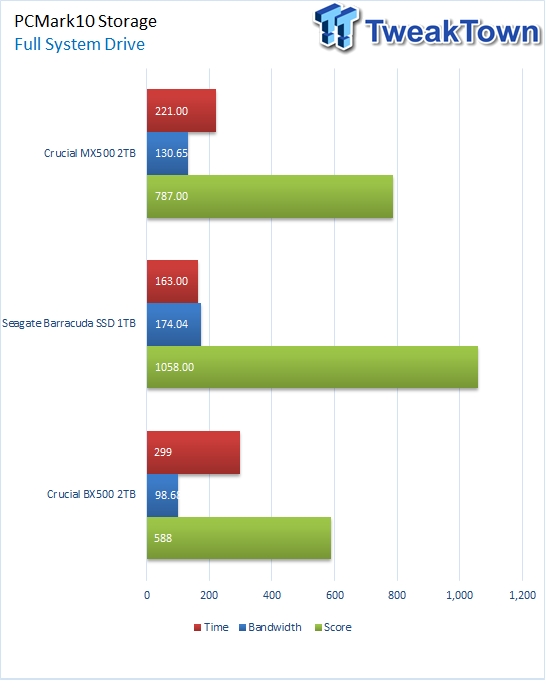 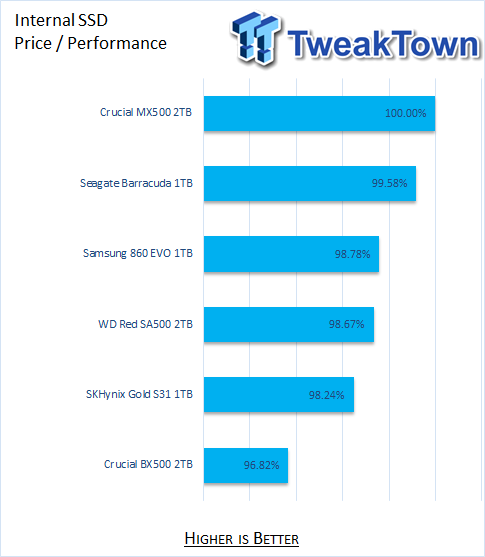 With higher performance and a solid price point, the MX500 manages to take top marks in the price/performance chart.

The MX500 has been out several years, and while it initially launched with a single 1TB capacity, this all has changed with the lineup now filled out from 250GB to 2TB. Build quality is on par with the best SATA has to offer, and drive endurance is rated at a solid 700TBW or 383GB per day for five years.

Performance in sequential workloads is easily able to hit the peaks of SATA - CDM showed 546 MB/s read and ATTO topping 526 MB/s. PCMark 10 showed steady improvement over the BX series for the MX500 as a daily driver, but not quite as good as the Barracuda SSD from Seagate. That said, Price/Performance is fantastic for the MX500, taking the top spot in our current charts for all SATA drives tested.

Pricing is a huge factor for consumers, and the MX500 delivers with just a $20 premium over its BX counterpart and looking at market competition, it comes in $20 lower than the Barracuda SSD and $70 cheaper over the 860 EVO.

For those looking for a high capacity SATA game drive for PC or console, the MX500 should be at the top of your list!