TEAM is a memory company that has kept us pretty busy over the years. With hands-on kits like the Vulcan, DARK ROG, DARK PRO, Night Hawk, and Night Hawk RGB, special edition Xcalibur RGB, we have seen many varying speeds and heat spreader designs. One thing we noticed along the way is that no matter the speed chosen or the aesthetics, TEAM has been offering great value for the performance that is delivered. That is not to say other manufacturers do not provide the same, but they are in the top five on our list, as to who you should look to when it comes to replacing or buying new DDR4.

In the list of previous kits we have examined, it started with a couple of sticks from the DARK lineup at TEAM, before our latest kits arrival, there were three in total. While we had our hands-on the DARK ROG and DARK PRO, we seem to have missed out on the vanilla DARK kits. However, it is the DARK series that gets the latest addition, and like the rest, are RGB-less, which should appeal to a bunch of the RGB haters out there! On top of that, we also have in our hands a kit which is elusive in the real-world, as we could not find them listed at the usual spots, but, we were given all of the information to deliver to our readers, so you can see the potential of more high-speed memory kits, especially on the AMD side of things, of which these new DARK sticks are designed to work with!

The DARK Z Alpha kit is the newest in the game for TEAM, and we have put them under the gun to do what they can, and see how well they stack up. While we have expectations as to how these should perform on the Intel side of the fence, their neighbors, AMD, well, we have not had many kits to test there at higher speeds so far. It should be interesting to see how this all goes down as we put the T-Force DARK Z Alpha 4000MHz kit through its paces and see for ourselves just how well they can do for the average users out there! The specifications for the DARK Z Alpha are pretty basic, but we can see a few things of interest. Yes, they are 288-pin unbuffered and non-ECC as much of what we test is, but as you can see below that, you can get these in two by 8GB kits or two by 16GB kits. Speeds range from 3200MHz with 16-18-18 timings, through 3600MHz with 18-22-22 timings, and the 4000MHz kit we have with 18-22-22 timings as well. Voltage for the use of XMP and DOCP is 1.35V across the board. Dimensionally the sticks stand 43.5mm tall, and while the length and width are listed, they are much less critical. The heat spreaders on the sides of the sticks are made from aluminum, and at this time, we found links for red, gray, and black variants within the DARK Z Alpha lineup. The warranty is listed as lifetime, which typically means they will support customers past the EOL mark, where limited lifetime usually means for the run of the product, and not after.

There is but one issue with the kit we have in hand, and we cannot find it yet on this side of the pond! There are 3200 and 3600MHz kits out in the wild, just not the 4000MHz kits. However, sifting through sites for price comparisons, the most affordable kit of 4000MHz RAM with 16GB of density to match what we have, pricing starts at $111 and work their way up to near $500! While we saw no actual retail listing to confirm the MSRP, we are told that we should expect the DARK Z Alpha that we have in our hands to be $99 flat! Compared to the lower-priced kits, aesthetically and by feature set, you are still getting a great deal with the cost, but we still have to see just how well they perform! 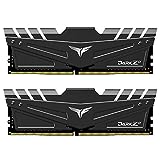