As our testing reveals, Phison powered Gen4 SSDs are the unquestioned performance leader for your Gen4 enabled AMD systems. Corsair's MP600 is an exquisite SSD and although it will cost you a bit more than some of the others, it is money well spent. The MP600 exemplifies quality from top to bottom. From its attractive and highly functional heat sink design, to its 5-year warranty, to its endurance rating - SSDs don't get much better than this. Phison and AMD are like brothers from another mother. They have both taken similar paths, playing the role of underdog for years. Barely on the radar of the industry leaders. Taking risks on forward thinking technology, investing all they have into the future. Well, their perseverance has finally paid off with both companies now being recognized as leaders in their respective industries. 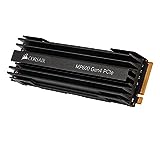 If you have PCIe Gen4 then Corsair's Phison-powered Force Series MP600 1TB SSD will deliver the best flash-based storage performance for your AMD powerhouse.