Enthusiasts have gone crazy for AMD's Zen 2 platform and for good reason. Zen 2 brings with it more performance for less money than anything Intel is serving up these days. For these reasons, AMD has almost overnight become the De Facto King of the enthusiast space. Additionally, Zen 2 brings to the masses more forward technology than Intel currently has to offer.

One of the most interesting of the many new technologies that are baked into Zen 2 is PCIe Gen4. PCIe Gen4 offers double the bandwidth of current PCIe Gen3 based technology, offering huge potential for increased performance via PCIe bus. This is music to the ears of storage enthusiasts, because storage performance is one place where users can immediately reap the benefits of PCIe Gen4's massive bandwidth.

On our bench today, we have Corsair's implementation of Phison's E16 PCIe Gen4 x4 SSD controller. Corsair's Force Series MP600 is an M.2 2280 NVMe SSD available in 500GB, 1TB and 2TB models. Let's dive in and take a closer look: Corsair chose to pump out their Force MP600 SSDs with a beefy aluminum heat sink. This will keep the venerable Phison E16 controller from thermal throttling under extended heavy workloads. On top of that, we think the large black heat sink makes the MP600 dangerously attractive and a nice compliment to any motherboard.

We will note that the heat sink is removable for those of you that wish to use your MP600 with your motherboard's integrated SSD heat sink, or if you prefer not to have a heat sink at all. 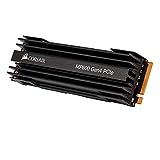