We included several other low-cost NVMe SSDs in the charts today along with two more expensive models that lead the consumer NVMe SSD market.

The ADATA SX6000 Pro doesn't scale sequential reads as we ramp up the queue depth. The drive does show strong 2,000 MB/s performance across the queue depth range, including QD1, where many of the low-cost models deliver closer to 1,500 MB/s. The drive loses its standing in the sequential write test using burst data. The run starts at 1,000 MB/s at QD1 and levels off at QD4 on the way up to 1,600 MB/s. This is quite a bit faster than SATA SSDs but well under the class leaders and other mainstream NVMe SSDs shipping today. The 1TB SX6000 Plus doesn't show signs of a large SLC buffer for writing sequential data. The write pattern indicates the drive may have a small SLC buffer used to cache all incoming writes, a method common to increase endurance. The random read performance is lower than any of the other drives in the charts today. The SX6000 Pro delivers just over 8,000 IOPS at QD1. That is even quite a bit lower than some of the better SATA SSDs shipping today like the Crucial MX500 that surpasses 10,000 IOPS. The single test that caught us by surprise in the 100% random write test, this one. The low queue depth performance was exactly what we expected from a drive using HMB technology, faster than a true DRAMless SATA SSD but not quite as quick as the other drives using DRAM. The shocking part is the high queue depth performance, where the SX6000 Pro started to walk away from the other drives in the chart. The relatively flat sequential performance on both extremes of the spectrum carries over to the mixed workload test. The drive stands its ground against most or the lower-cost models and even overtakes ADATA's flagship SX8200 Pro in every queue depth past eight. The two DRAMless drives in the charts today, SX6000 Pro and Mushkin Helix-L, both show weak mixed random performance. The SX6000 Pro outperforms the Helix-L with the SMI SM2263XT controller. 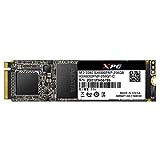