Looking inside with the panel removed, we can see that the build space is wide open with only the vertical cable management cover bar protruding into the space. There are also two plastic relocatable SSD trays on top of the PSU shroud area. Initial impressions, this should be rather easy to build in, and the vertical cable management cover bar should do well to help hide cables and just allow them to protrude at the boards edge for ATX based boards. The front as mentioned before has a removable tray to assist in ease of mounting front fans or radiator since the front panel is fixed and non-removable. Fan or Radiator support is up to dual 120mm or dual 140mm. In that same effect, Radiators will max out at 280mm for 140mm based fans or 240mm for 120mm based fans. The vertical bar can be used to slot in up to M4 screws in the slot near the top to mount clamps for cylindrical reservoirs which definitely ups the H500i's custom liquid cooling game. The Motherboard are as mentioned previously supports up to ATX size, and can fit mITX and mATX should you so desire. The large CPU cooler backplate cutout is plenty sizeable to service any cooler backplate I have ever seen so this should not be much of an issue. Cables are handled quite differently in the H500i as the vertical bar covers most of the pass-through holes which means that the need for a grommet on the holes is far less. There are top holes for passing cables to the CPU EPS cable along with others as needed. The PSU shroud on the H500i as mentioned previously is unique as it's not an internal model or at least not completely. The PSU shroud extends to being an outside panel. Internally it is covered with holes which allows airflow in and out of the shroud area. The holes also allow the SSD trays pictured here to snap into four corners mounting tab holes. If not using these trays they can be easily removed and stored away for an even cleaner look. The PSU shroud area also has multiple pass-through points for cables as needed. There is even one mid-way toward the window panel near the vertical bar, which can be used for the GPU cables depending on GPU being used and desired finished build appearance. 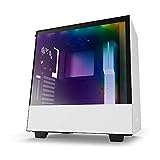