PNY released the XLR SC3030 in Europe months before the North American release. The series quickly gained attention for its low price points and high performance. One year after the company first displayed the model (Computex 2018), the XLR8 CS3030 is ready to take on America. 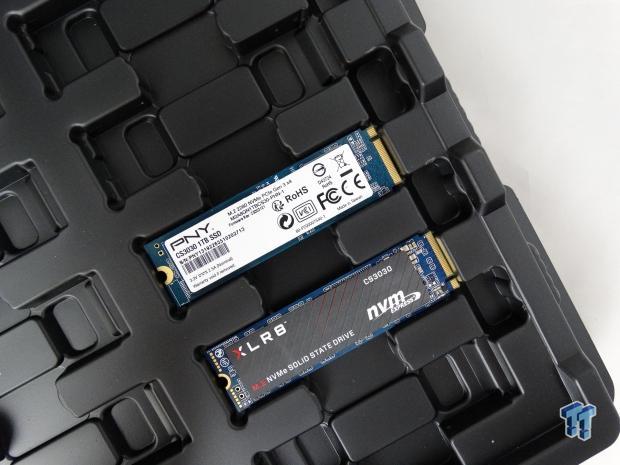 When flash is cheap, high-performance SSDs disrupt the rest of the market. These drives simply encroach on price points held by products designed for mainstream and even entry-level markets. The cost difference is so small that in many cases, just a few dollars separates an acceptable mainstream SSD (often a DRAMless model) and a drive with a significant performance advantage.

This is where we are right now, and there are true bargains to have if you know what to look for. The PNY XLR8 CS3030 is a series you should keep an eye out for when available. Availability is nonexistent at the time of writing, at least in the US from drives built for this market. An Amazon seller shows stock in the US, but these drives shipped over from Europe and carry a premium. PNY will release this series in the US after the official US launch at Computex in just a few days.

The XLR8 CS3030 is a Phison PS5012-E12 drive with DRAM and Toshiba 64L BiCS FLASH. In year's past, we could point to a Phison-based drive and say a Phison is a Phison, is a Phison, but that is no longer the case. The companies working with Phison have more control of the firmware and features, and we're starting to see more customization with the E12 controller.

PNY doesn't list random performance. I find this odd for a drive literally called XLR8, but we will leave this alone for now.

We don't have strong pricing details of these drives in the open market right now in North America. PNY lists the MSRP's on the official product page, and you can order there right now. We usually find lower pricing on Amazon and Newegg after an SSD has been on the market for thirty days. The 1TB XLR8 CS3030 carries an MSRP of $159.99, an already strong price point for a premium NVMe SSD. 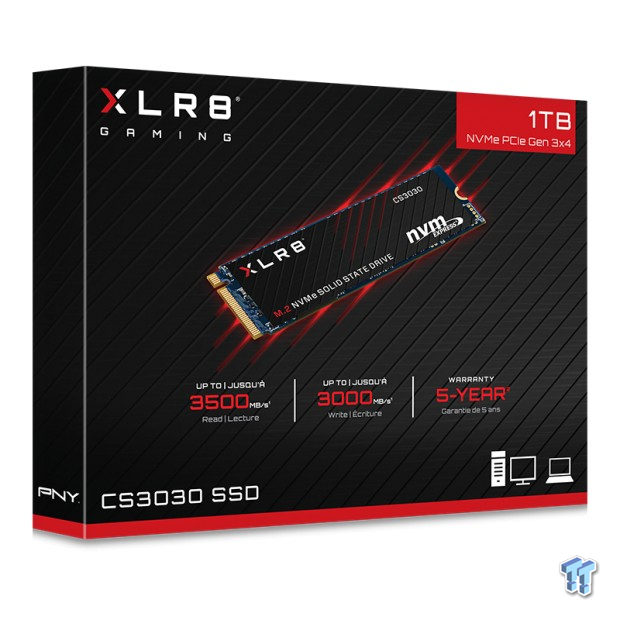 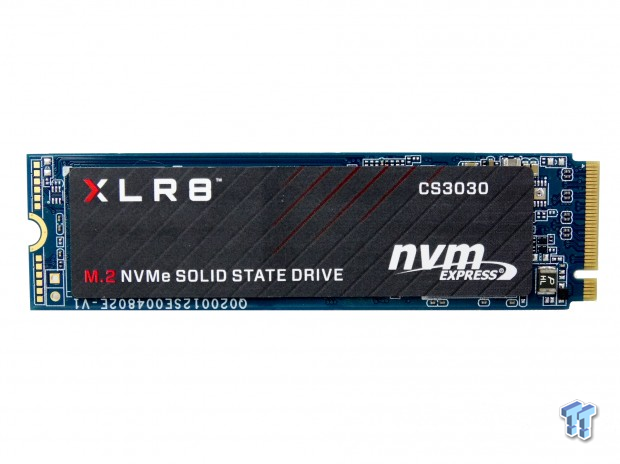 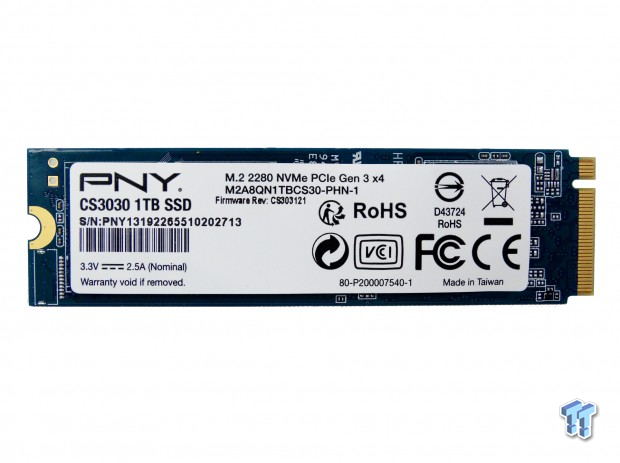 Our two sample drives arrived in bulk packaging and not the retail box. We did find an image of the retail package online, and it looks good.

The drives use a standard Phison E12 reference design layout with DDR3 for the 250GB and 500GB models and DDR4 for the 1TB and 2TB models. PNY added a black sticker with subtle graphics on one side and drive detail on the other.

These are double-sided SSDs so there are a handful of ultra-slim notebooks they will not work in (but very few). Instead, PNY chose to use the other side of the circuit board to spread the flash into two additional packages. This spreads the components out to relieve the concentration of heat and has some performance benefits.

The 1TB PNY XLR8 SC3030 goes against the most popular 1TB NVMe SSDs available today. These include the original Phison E12 SSD, the MyDigitalSSD BPX Pro. 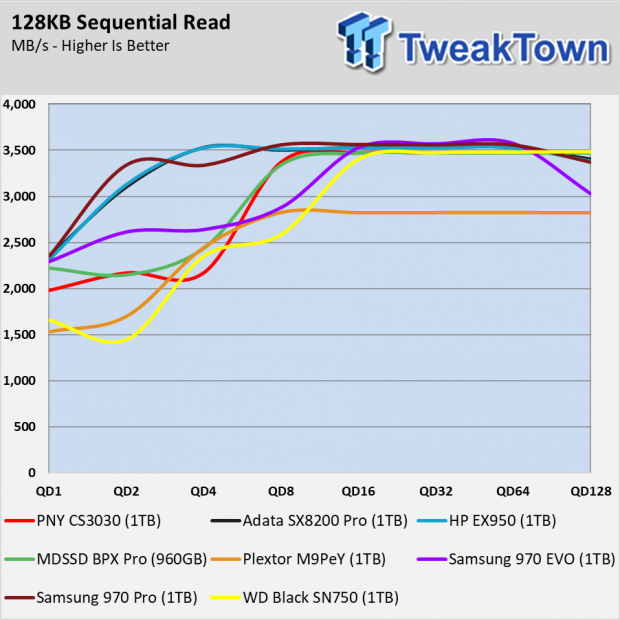 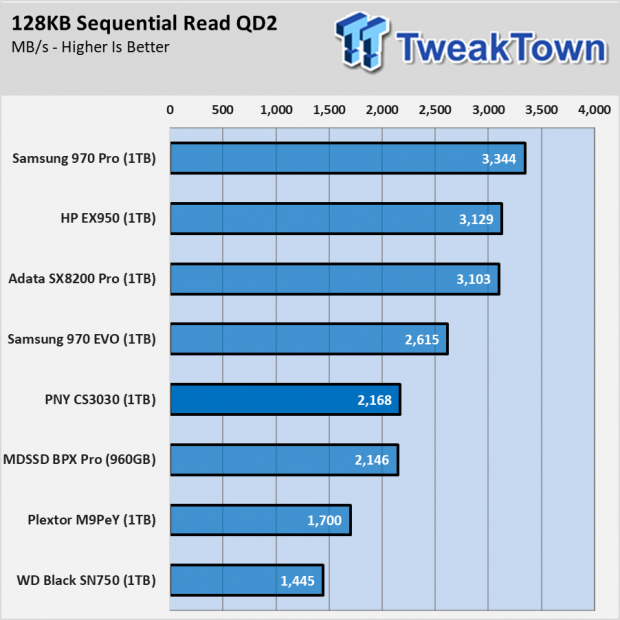 As we mentioned on the previous page, the newer Phison E12 drives show more differences than we saw in the early drives we tested. The one thing that has stayed consistent is the dislike with our sequential read synthetic testing.

Drives with the E12 controller show a strong dip at queue depth (QD) 2 and 4 with our script but not with other software. This is artificial and has more to do with the previous workload than it does with reading sequential data. We will look at sequential reads later in this review. 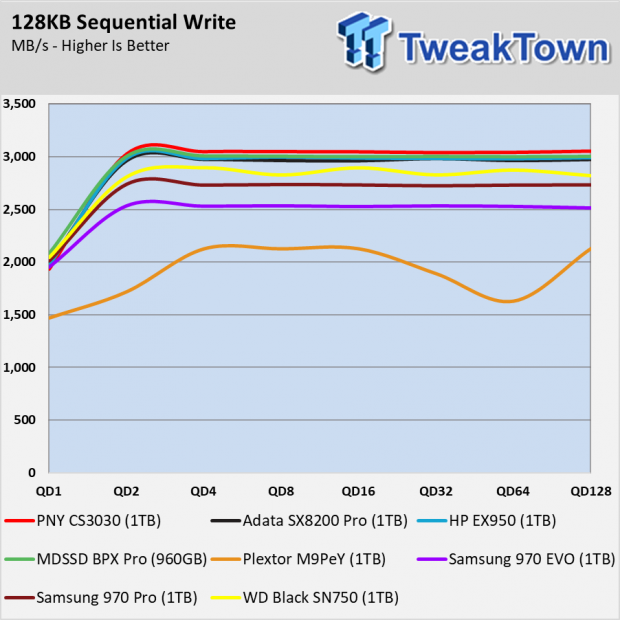 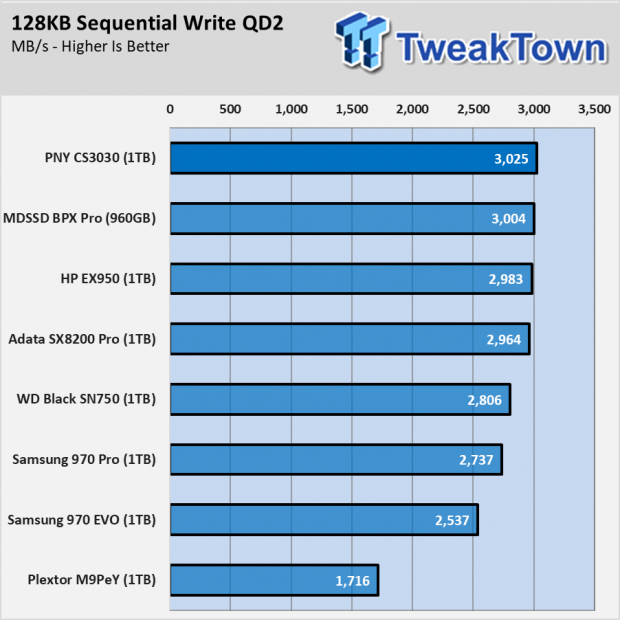 The 1TB PNY SC3030 quickly moves to the top of our sequential burst write test with over 3,000 MB/s at QD2. The drive sets a new record for flash-based storage in a consumer SSD. 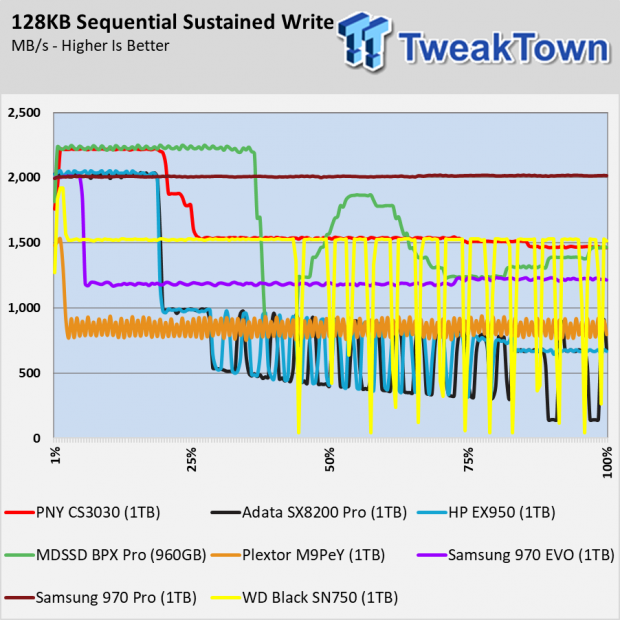 We mentioned Phison and partners have played with the firmware since we first started testing E12 products. The 1TB PNY CS3030 shows a more consistent sustained sequential write profile but at the expense of a slightly smaller SLC buffer compared to the MyDigitalSSD BPX Pro. 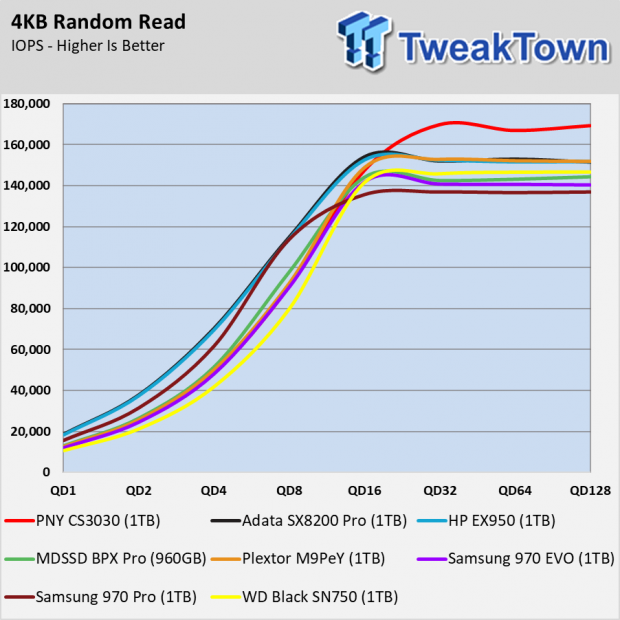 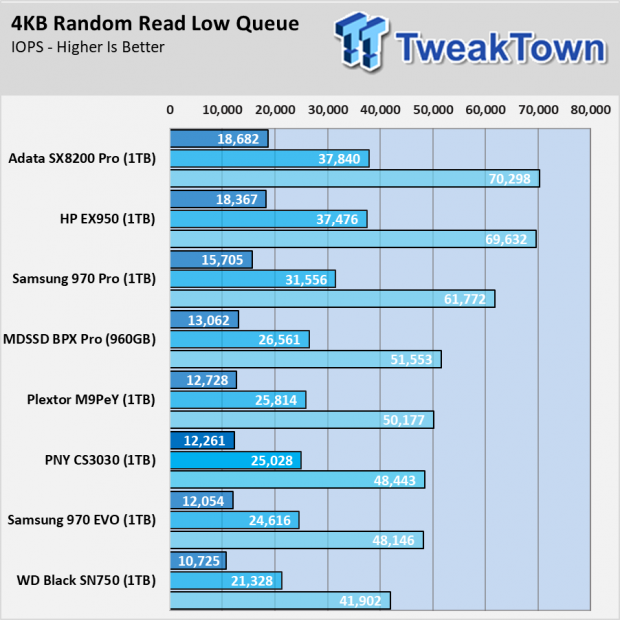 At low queue depths, the CS3030 shows the same random read performance we've seen with other E12 SSDs, right around 12,000 IOPS at QD1. The difference with this drive is its peak performance at high queue depths where it scales well past the other models at QD32 and above. 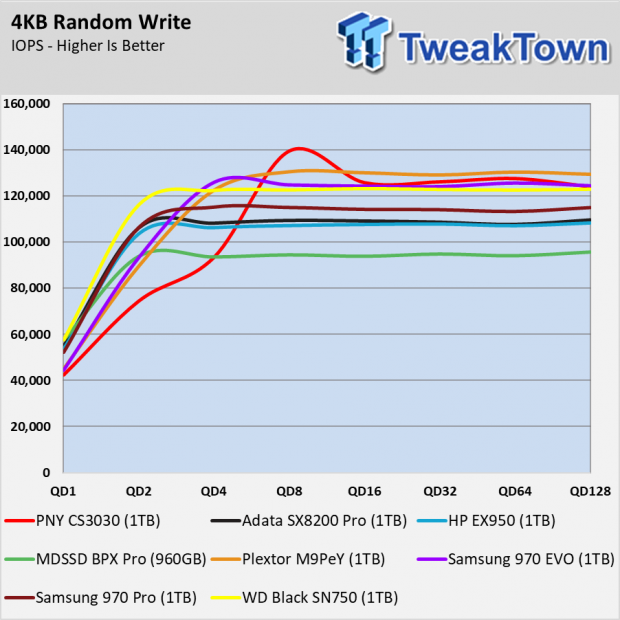 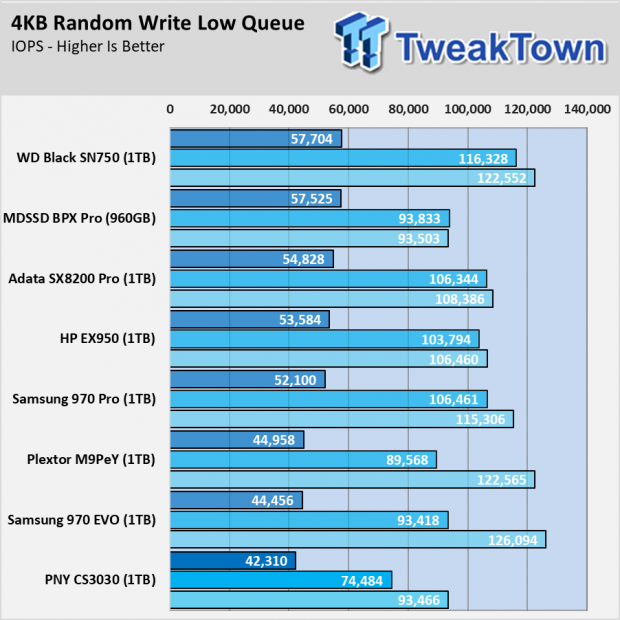 The random write performance profile also shows the highest burst speed, and that comes at QD8. At lesser queue depths, the 1TB CS3030 shows a different profile with marginally lower performance that simply takes longer to scale up like what we see with the other drives. 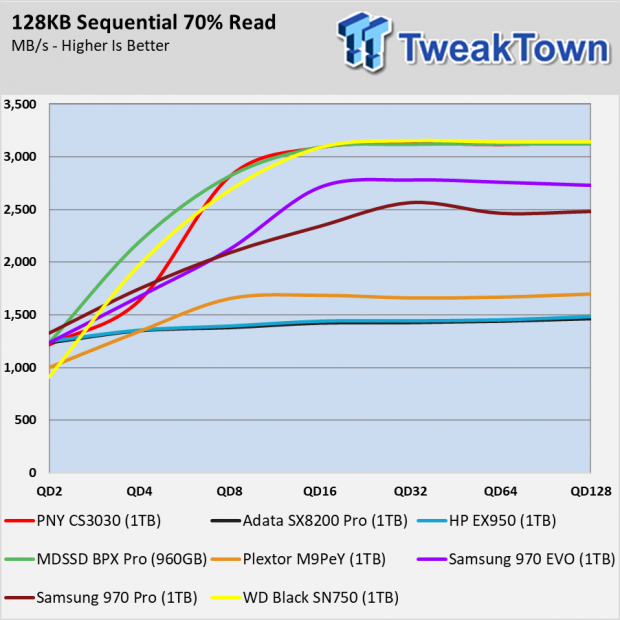 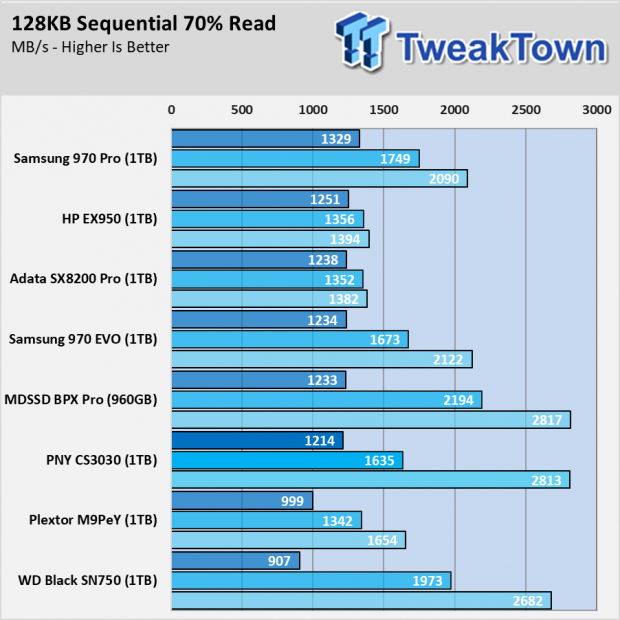 The sequential read dip carries over to the mixed workload test with a drop at QD4. The rest of the performance profile is similar to the BPX Pro. 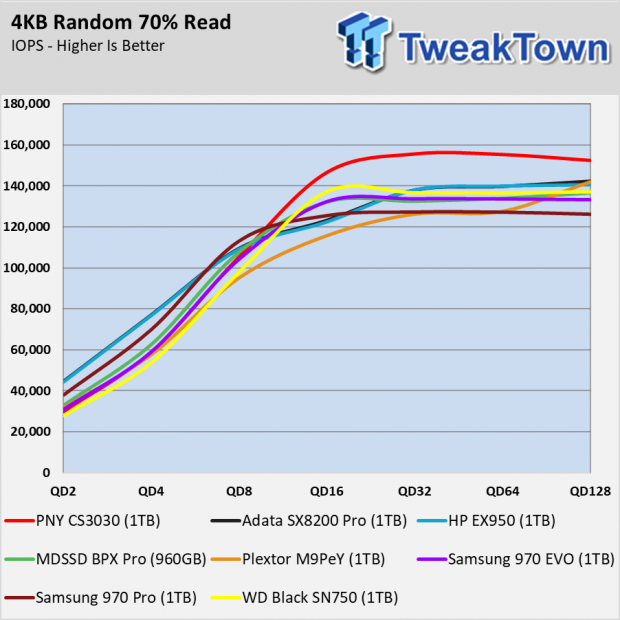 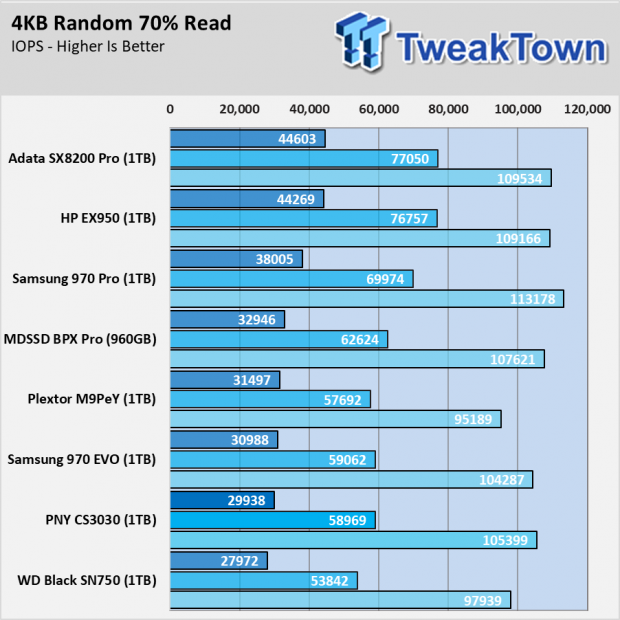 The random mixed workload test shows similar performance to the BPX Pro until QD16. At QD16 and above, the XLR8 CS3030 scales above the other drives with even more IO. 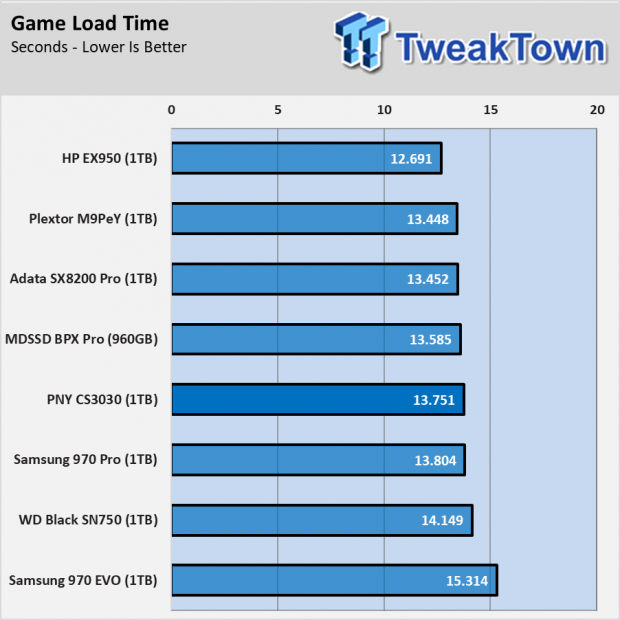 The PNY XLR8 CS3030 performs right where we expect it to based on the synthetic tests on the previous page. 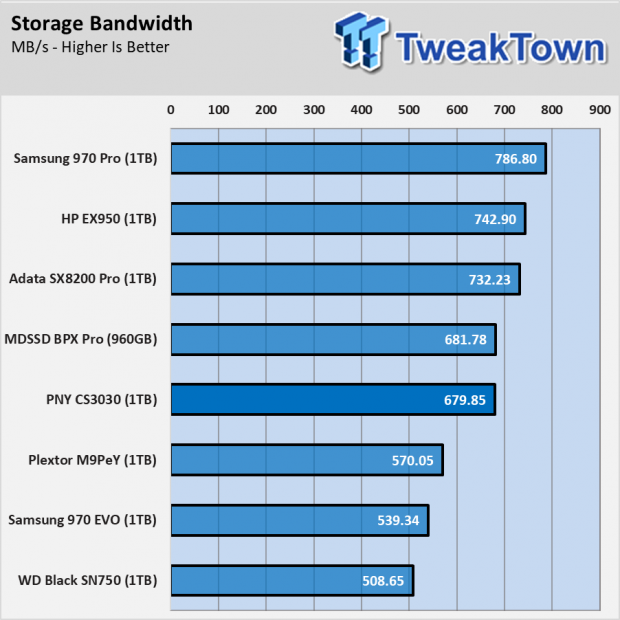 The PCMark 8 Storage Test uses nine application to perform ten tests using common software that many of us rely on every day. The applications, like Word, Excel, and Photoshop, use a wider range of block sizes and a mix of random and sequential data. The average throughput score combinations the results of all the tests into an easy to compare result.

The PNY XLR8 CS3030 performs well in these tests with applications, but it doesn't stand out from the other E12 drives we've already tested like the BPX Pro from MyDigitalSSD. 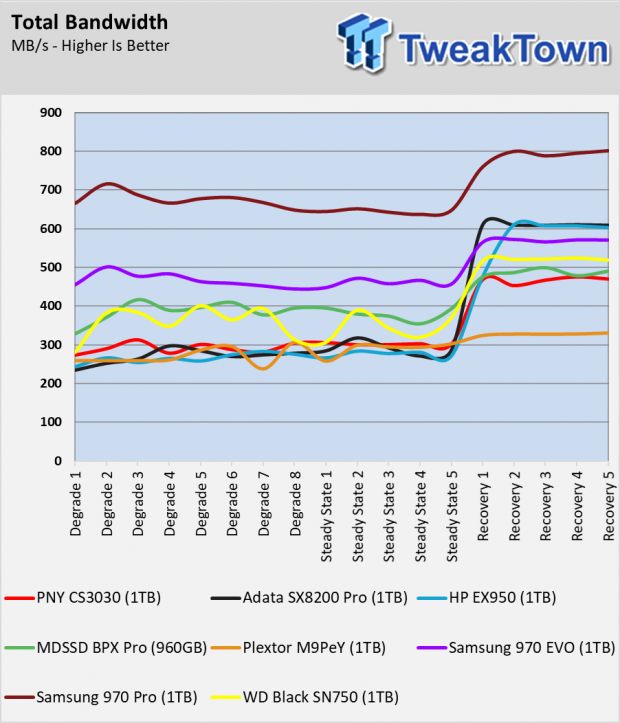 The new optimizations have decreased performance under heavy workloads compared to the early E12 products we tested. The CS3030 also takes longer to recover full performance when given time to recover. 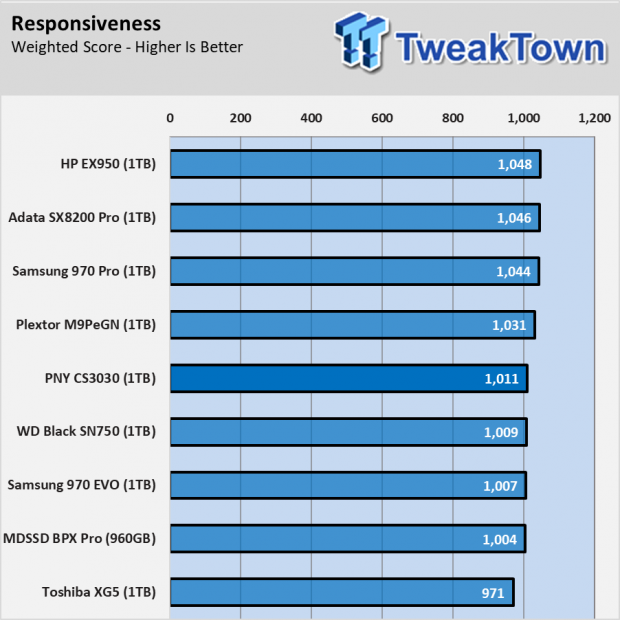 The SYSmark test simulates a typical day in the office down to the pauses from coffee or bathroom breaks. We spotted improved system responsiveness from reduced latency in applications with the CS3030, but the drive still lacks the explosive punch found in drives with the Silicon Motion, Inc. SM2262/2262EN like the two drives at the top of this performance chart. 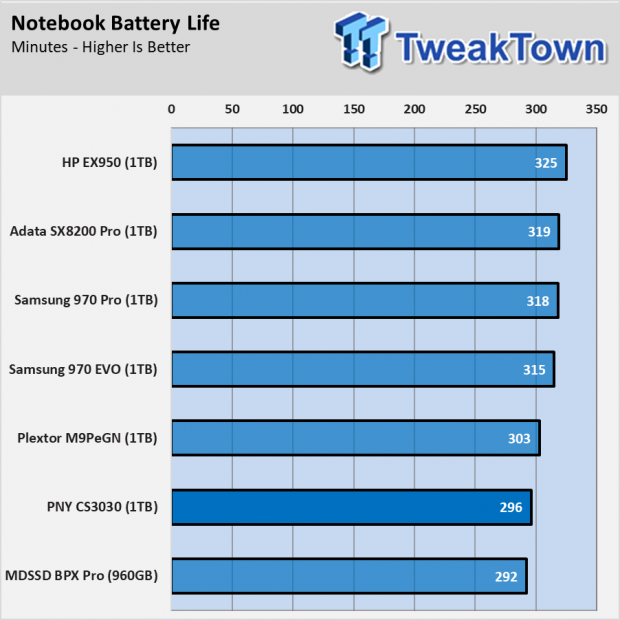 This is one area where Phison E12-based SSDs have not performed well. On average, NVMe SSDs use more power than SATA SSDs. Even in this power-hungry notebook, the PNY XLR8 CS3030 delivers nearly 5 hours of office use on a single charge.

Even though we've seen a number of changes with the newer Phison PS5012-E12 SSDs coming to market over the last few months, the performance has largely remained the same. These drives are not the fastest NVMe SSDs shipping today. That honor goes to the Samsung 970 EVO Plus and drives with the SMI SM2262EN controller. The E12s are contenders for the best value since they deliver very strong performance at a bargain price point.

In Europe, the PNY XLR8 CS3030 has a reputation for its low price point. In the coming weeks, we'll see how that transfers to the North American market. PNY's MSRP for this series is aggressive as far as MSRPs go, but we expect the Amazon and Newegg prices to make these strong contenders for budget-minded shoppers this summer.

We're not sure why PNY took so long to bring this series to market. We first spotted it at Computex in June 2018, a full year ago. By September, we had retail E12 samples from MyDigitalSSD, but the XLR8 CS3030 wasn't ready for prime time. After seeing the drive last year, we knew it was a model to keep an eye on but didn't expect it to take this long.

We have two XLR8 CS3030 drives in for review, the 1TB we tested today and the 250GB. Our plan to publish the second review when the series comes to market in North America and gives us a chance to see retail pricing. When you have so many nearly identical drives selling at one time the companies use pricing to differentiate from the pack. That is when shoppers have an advantage.

The PNY XLR8 CS3030 is already a hit in Europe due to its high performance and low pricing. PNY hopes to bring that combination to North America. We know this series has the performance but we have to wait on pricing details.