When flash is cheap everyone gets in the SSD game. GIGABYTE is no exception. The company, best known for motherboards, has released a handful of SSDs over the years when the market provided the opportunity. What makes the latest release special is the advanced integration of the company's RGB lighting technology. It's also a very fast consumer SSD. Turn the lights off; the GIGABYTE AORUS RGB M.2 NVMe SSD is about to shine. 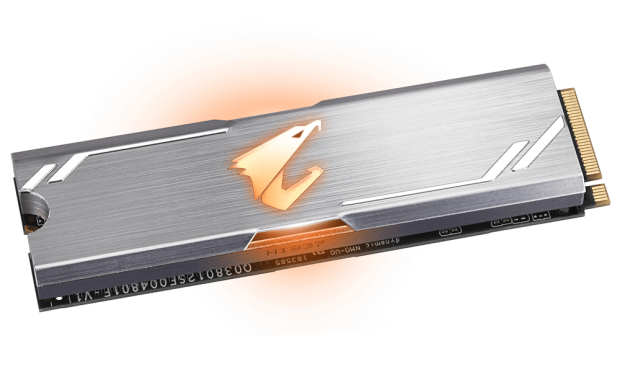 RGB for 'all the things' is polarizing. I suspect half of our audience, the older portion; have already clicked past this article from the title alone. The other half, mostly younger readers, will follow every word.

Personally, I transitioned from being an RGB hater to admiring nice builds with the technology. For me, it doesn't matter if it's a small dose of color or a full on shower of the bling-bling. What makes RGB look good isn't the amount, it's the synchronization. To date, all RGB SSDs have been standalone products with either a single color, like the Intel Optane SSD 905P, or a predefined pattern, like the Plextor M9Pe add-in card.

The GIGABYTE AORUS is the first M.2 SSD that integrates into the company's RGB Fusion 2.0 system to give users full control of the pattern and color. The drive is an extension of the motherboard at that point and not a simple afterthought. 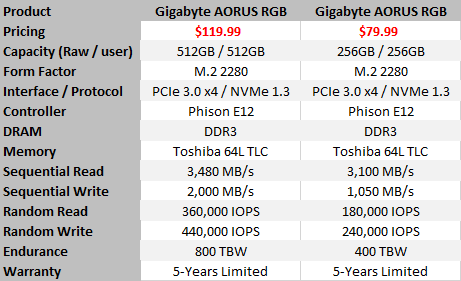 Lights are one thing, but this section is about the speeds and feeds. GIGABYTE released this series in just two capacities, 256GB and 512GB. The company also announced a PCIe add-in card for larger capacities that will come to market in June.

The shipping drives use the familiar Phison PS5012-E12 controller combined with Toshiba's BiCS FLASH 64L 3-bit per cell memory. This is the same combination as the MyDigitalSSD BPX Pro, Corsair Force MP510, and other low-cost popular drives shipping today. The difference here is two-fold. The AORUS M.2 NVMe SSD adds RGB lighting and a heat sink.

I think we're all up to speed on RGB lighting, but the heat sink is fairly new for SSDs. The additional aluminum doesn't increase spec-level performance. The 256GB drive we're testing today shares specifications with many other NVMe SSDs based on the same controller and memory combination. What the heat sink actually does is keeps the controller outside of the thermal throttle state for longer than a drive without a heat dissipation device. Essentially, you can read and write more data before the onboard logic lowers performance for self-preservation reasons.

We've yet to find either of the new AORUS RGB M.2 SSDs in the wild but expect availability soon. GIGABYTE passed along the MSRPs for the small capacity series that starts at $119.99 for the 512GB and $79.99 for the 256GB model.

GIGABYTE backs the series with a lengthy 5-year warranty and ample endurance to span the time. 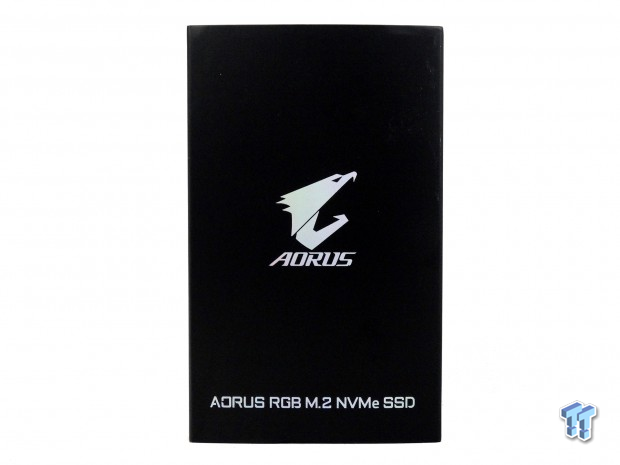 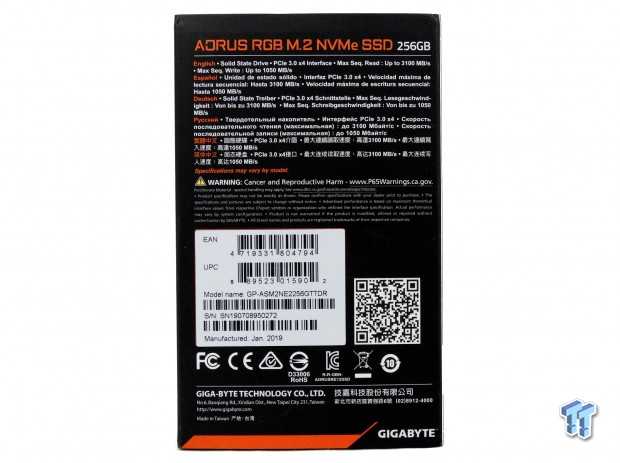 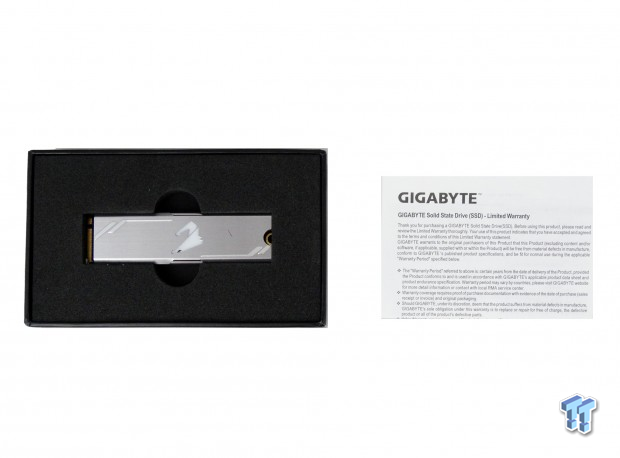 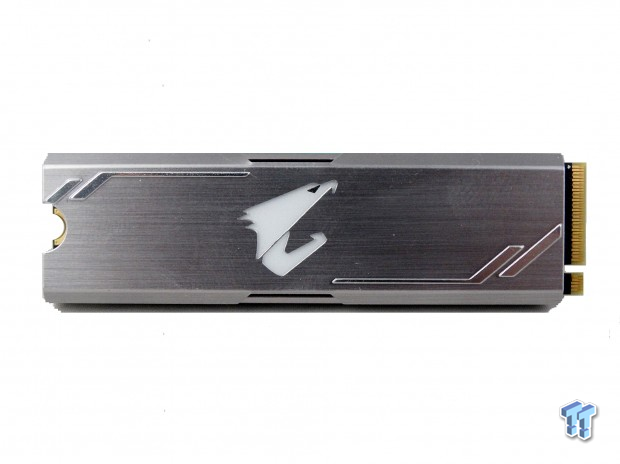 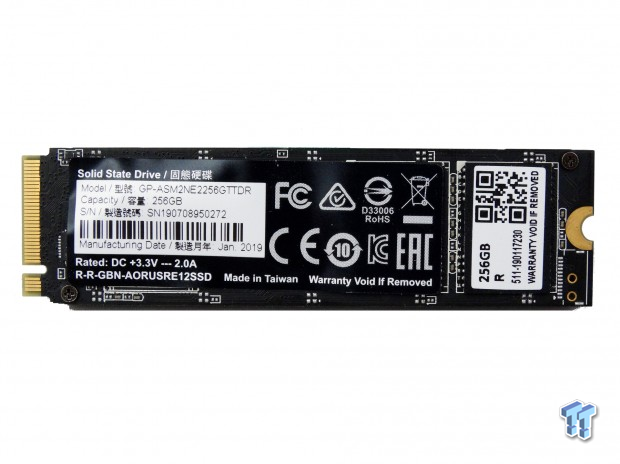 GIGABYTE put together an attractive package for the AORUS RGB M.2 SSD. The drive itself also looks great. The center bird lights up with a color change pattern before you address the lighting via the software. We will talk more about the software and overall system support in the conclusion of this review. 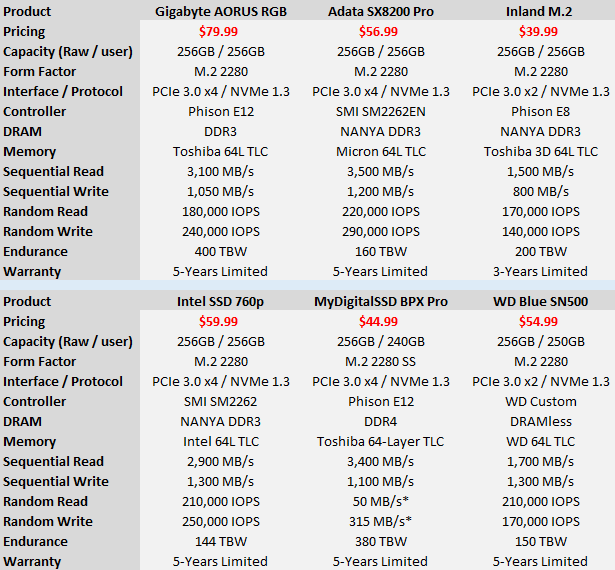 We rehashed the low-cost 256GB-class NVMe charts last used in the WD Blue SN500 NVMe review. The AORUS RGB is the most expensive drive of this group, but the others have had time to settle when the GIGABYTE isn't even available yet.

We've tested a number of Phison E12-based SSDs, and for the most part, the performance is similar across the board for drives of the same capacity. There are a few different firmware revisions shipping, and that plays a role. We do expect some changes with the addition of heat sinks and LEDs to extended IO and power consumption. The other E12 drive in our comparison group comes from the MyDigitalSSD BPX Pro tested with the initial release firmware. 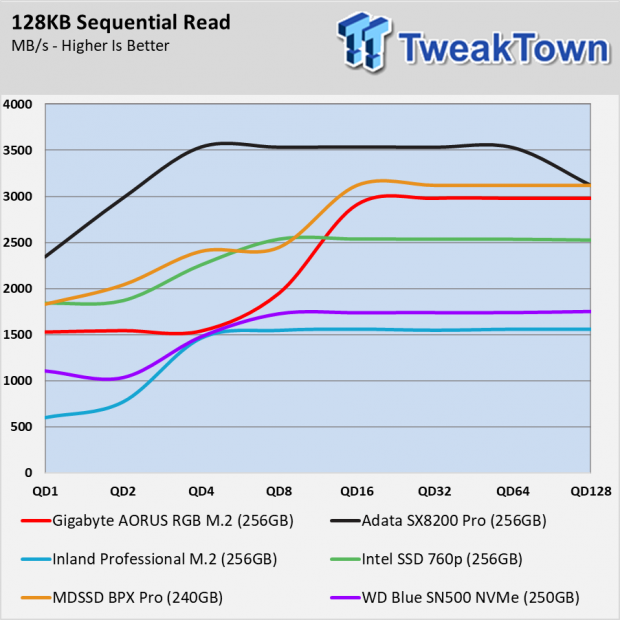 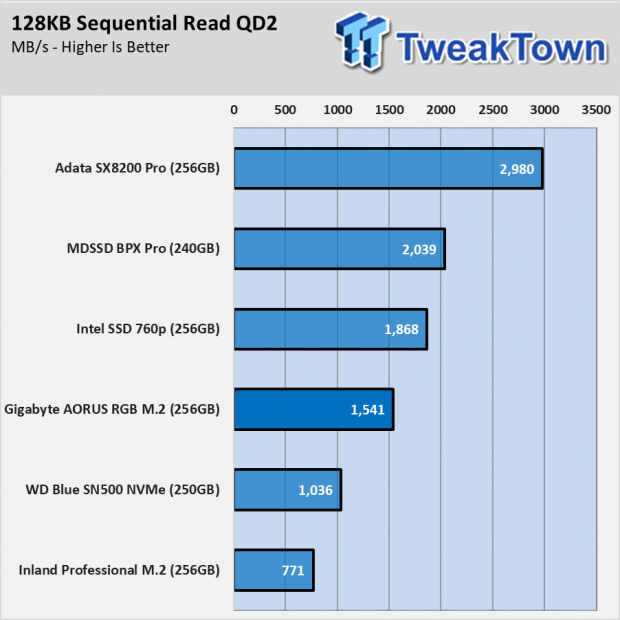 There are some differences between the BPX Pro and the AORUS RGB M.2 in the sequential write test. None of the E12 drives we've tested thus far like our sequential read script for one reason or another. The queue depth (QD) 2 and 4 results always come out much lower than they should with our test, but not others. 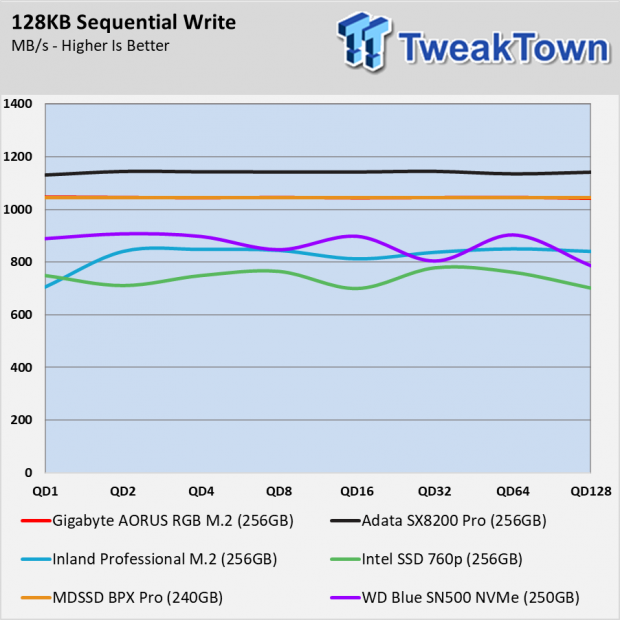 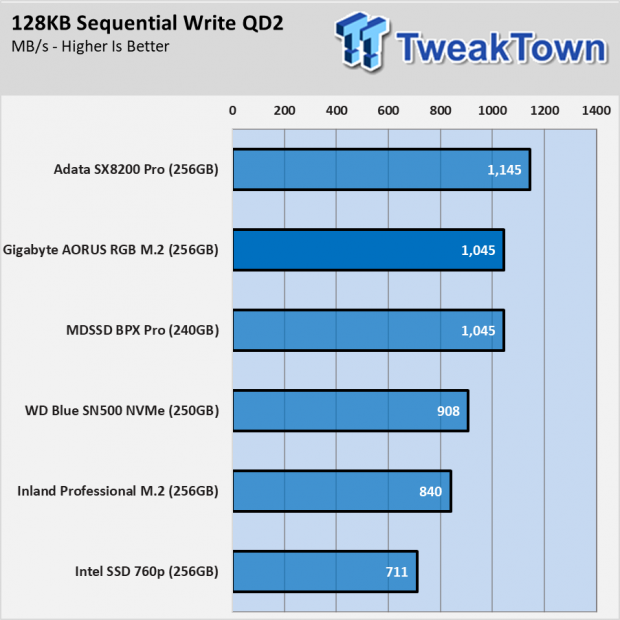 There isn't a noticeable difference in the sequential write test between the two E12 drives. The BPX Pro line on the graph overshadows the AORUS from QD1 to QD128. 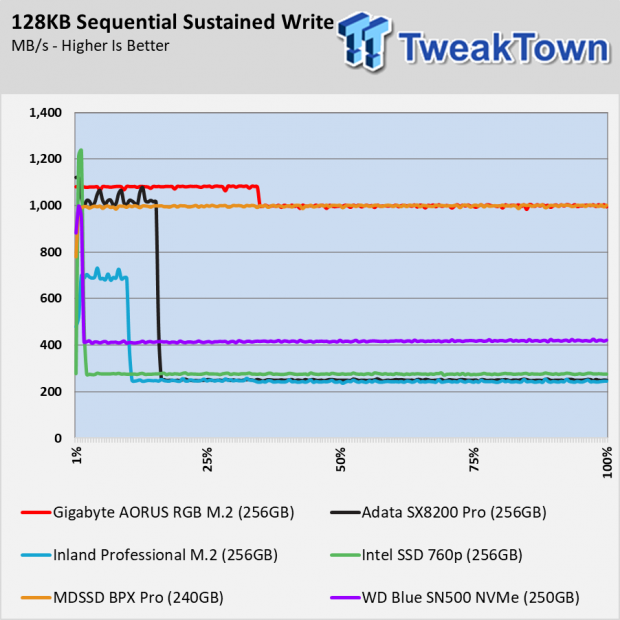 The newer firmware on the AORUS gives the drive a small advantage in the sustained write test for the first 40% of the user capacity. It important to note that neither drive suffers from thermal throttling writing to the entire user area (the full amount of the flash not set aside for overprovisioning). That would change with random data, but in a consumer environment users only read and write random data in small bursts. 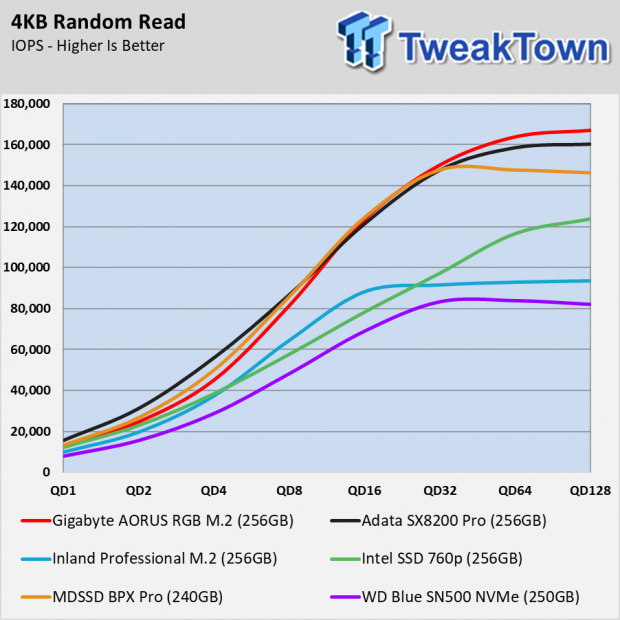 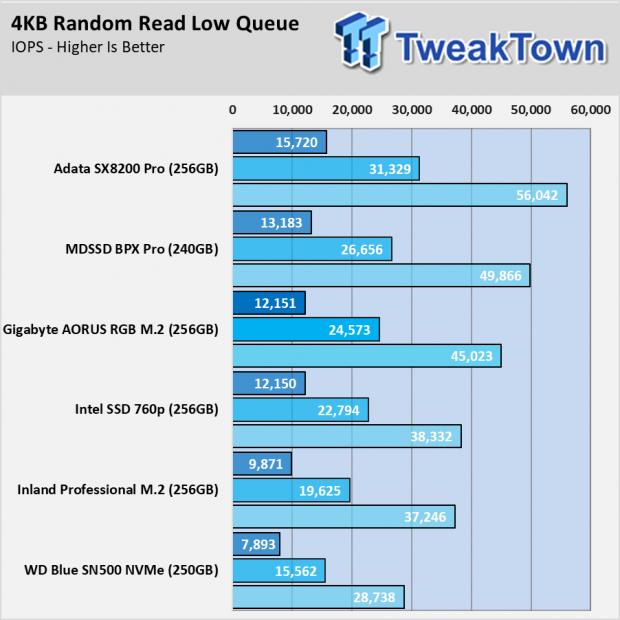 The Phison E12 controller paired with 64L Toshiba BiCS FLASH delivers well over 10,000 random read IOPS at QD1. This is a good place to be for a low-cost NVMe drive but well behind products using the Silicon Motion, Inc. SM22262/SM2262EN controllers. The E12 drives, like the new AORUS, do make up for the lower random read performance at low queue depths by delivering more performance in sustained workloads. 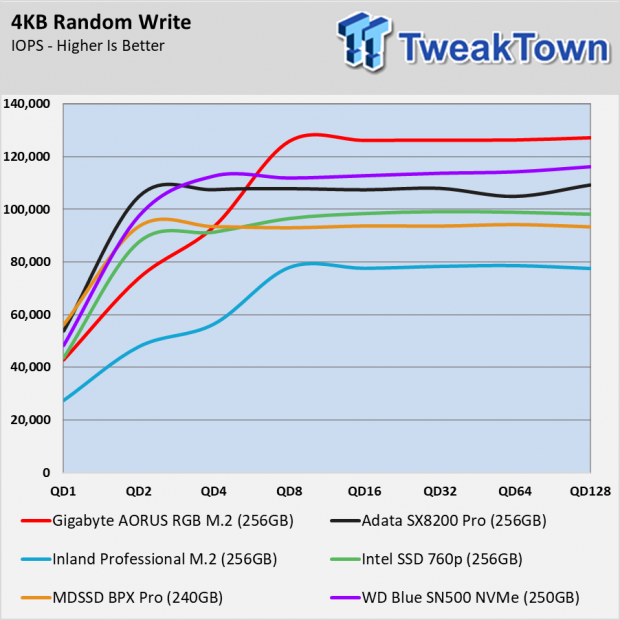 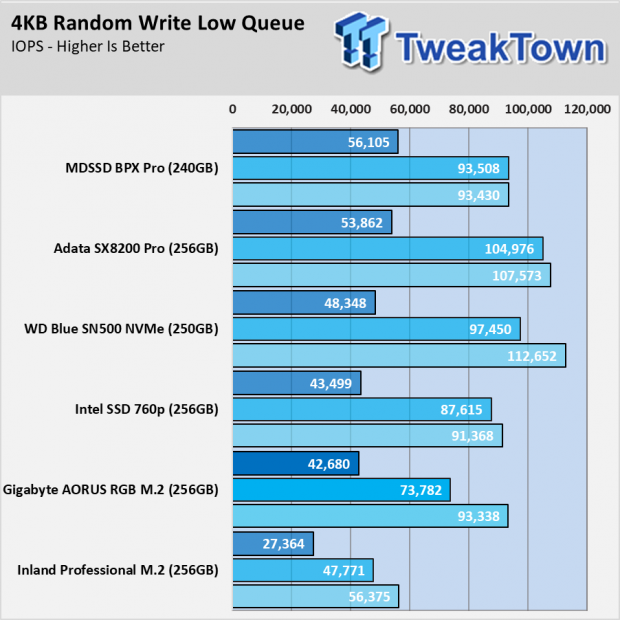 The AORUS starts low in the random write test. The performance curve is quite a bit different from the BPX Pro. We heard Phison made some changes to the E12 series but didn't expect to see so much variation in the performance. 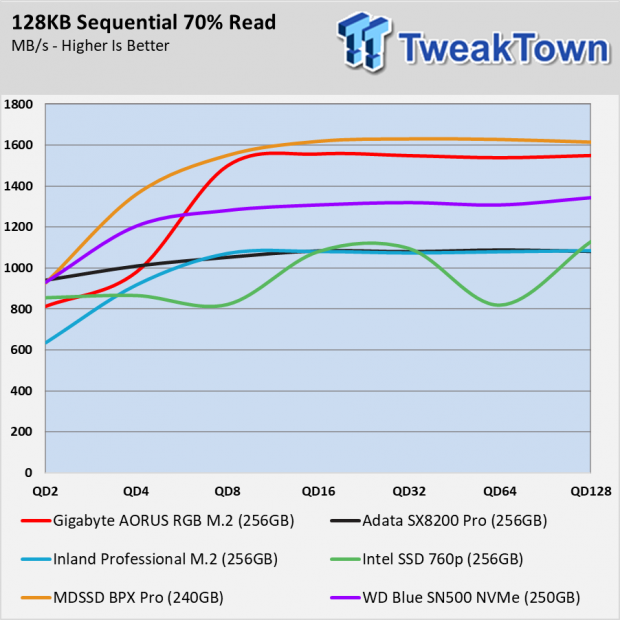 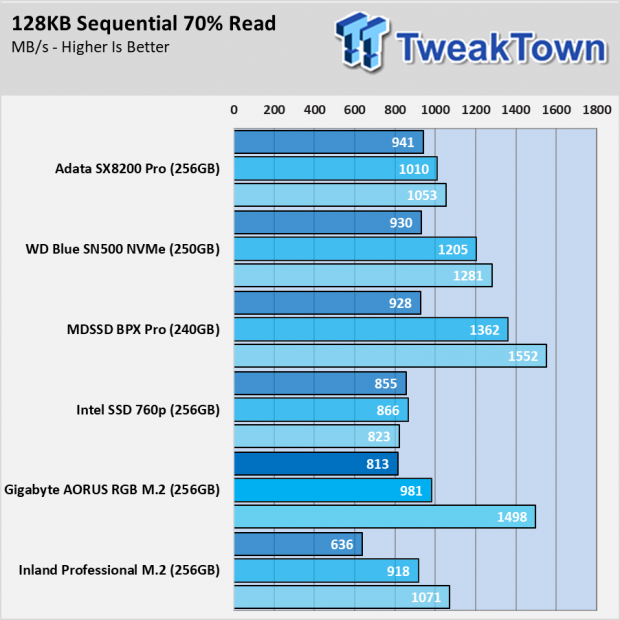 We can say the same for the 70% read sequential mixed workload test. The GIGABYTE AORUS RGN M.2 nearly reaches the same high throughput as the BPX Pro, but the performance curve is quite a bit different. 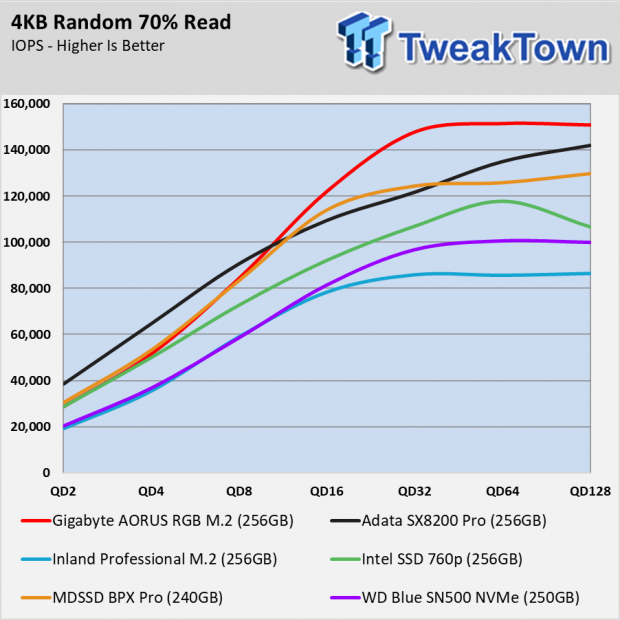 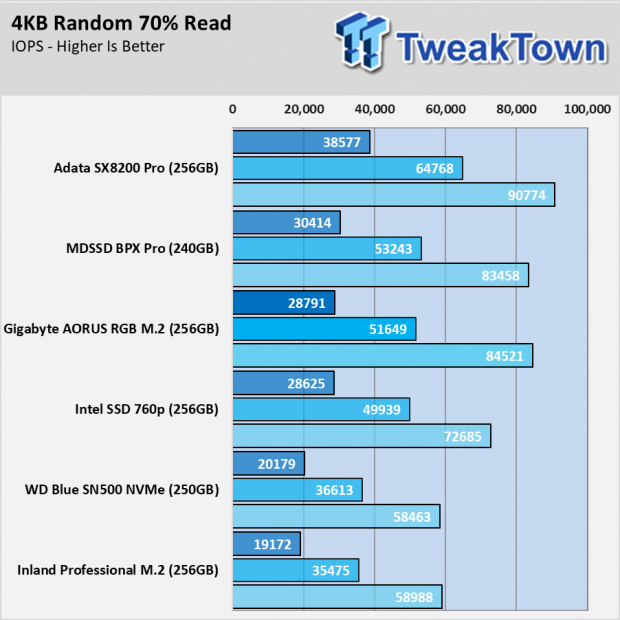 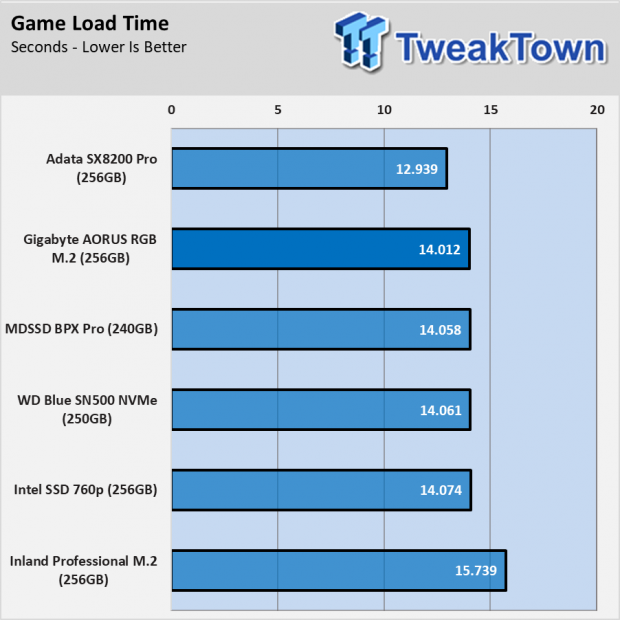 The firmware and inclusion of a heat sink increased the game load performance slightly over the BPX Pro when it comes to loading game data. The GIGABYTE still doesn't have the same pep as the ADATA SX8200 Pro in the 256GB class, but it still delivers great performance. 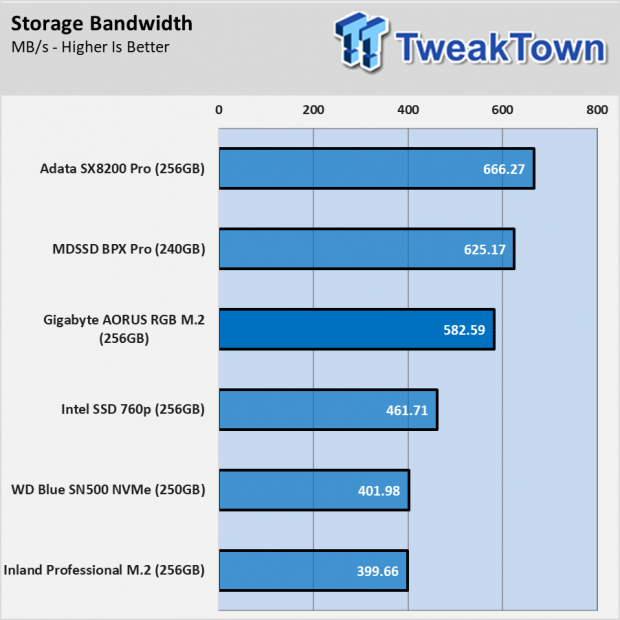 The PCMark 8 Storage Test uses a wide range of applications to measure performance. The game load test in the previous section is a focused test, but this one covers most activities from users, like Microsoft Word and Adobe products.

The AORUS RGB M.2 performs well in this test even though it's not the overall winner in throughput. 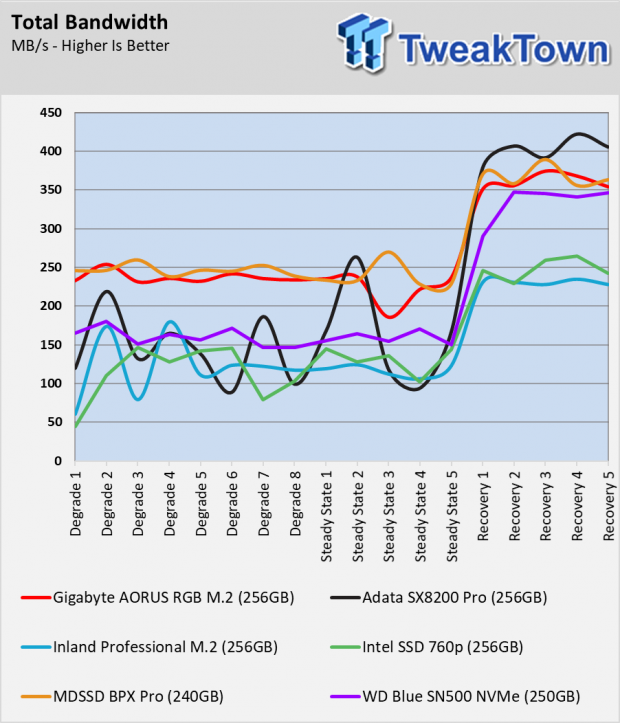 The Extended Test uses the same workloads as the previous section, but starts running them in a loop after filling the drives with data to push them into steady state. This is where the powerful E12 controller stands out against the modern NVMe controllers that rely heavily on cache rather than pure processing performance. The AORUS works well as a workstation drive, and unlike many others in this price range, it also gives workstation users enough endurance to work well in this environment. 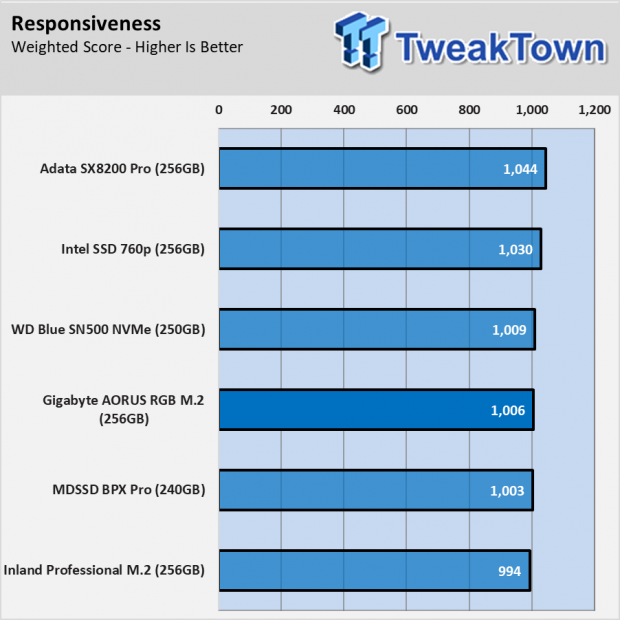 The system responsiveness test comes from BAPCo's SYSmark 2014 SE suite. This test measures the responsiveness or snappiness of your PC. BAPCo designed the suite to test across systems, but we repurposed it to test components and in this specific case, storage components.

Ideally, we want a score higher than 1000. That's the baseline measured on a similar system with an OEM variant of the Samsung 860 EVO. The 256GB AORUS RGB M.2 surpasses the 1000-point threshold we look for that gives us a nice user experience. 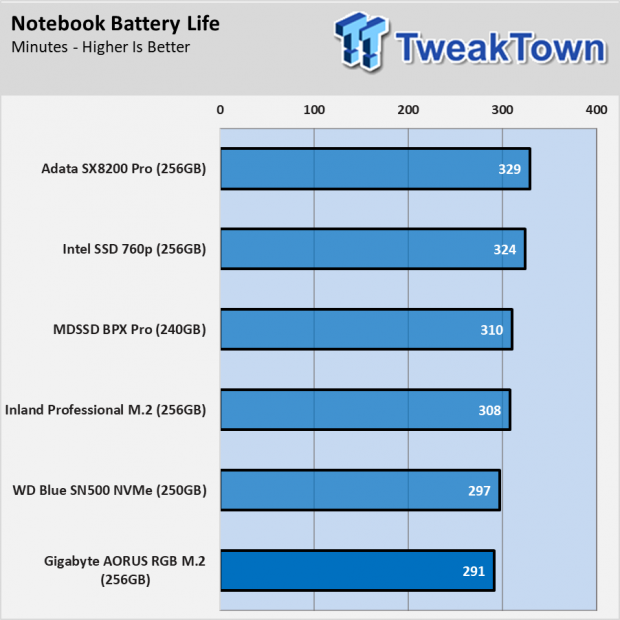 Phison E12-based SSDs are not the best option for use in a notebook. We were lucky the AORUS RGB M.2 even fits in our awesome Lenovo Ideapad Y700-17 gaming system. Most will not try to hide this SSD in a notebook, but we still like to run this test when possible.

Our review took quite a bit longer than most others already published. We ran into an issue with the RGB portion of this product and wanted to figure it out before proceeding.

About that RBG thing. If you don't have a newer 300-Series Intel chipset motherboard from GIGABYTE, the LEDs are not addressable. The drive will light up, do a color-changing pattern and that's it. Even GIGABYTE's new AMD-based systems cannot adjust the pattern or set a static color. This severely hampers the overall usability of the product for most shoppers. 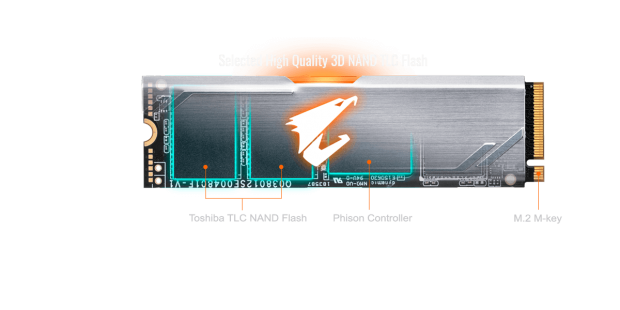 With that in mind, the GIGABYTE AORUS RGB M.2 is a niche product within a niche. It does work as a color changing RGB SSD in any desktop system, and it does provide additional cooling that allows the drive to work for longer before thermal throttling, but it's not what we completely expected.

Performance wise, the 256GB AORUS RGB M.2 delivers the goods for this capacity. In a later review, we will test the 512GB model and compare it to the similar priced models shipping today. The performance difference between the 256GB and 512GB drives is night and day with the 512GB seeing a significant performance increase.

The main issue with the AORUS RGB M.2 SSD is its price. The MSRP for this drive is $79.99, and that was a good price for SSDs last year. I hope that the price changes rapidly once these hit Newegg and Amazon. Other 256GB Phison E12 drives with similar baseline performance cost quite a bit less, some are even the cheapest NVMe SSDs on Amazon today.

The heat sink is a nice add-on, but most users will never see thermal throttling with the E12 controller. The heat sink on the AORUS RGB M.2 pretty much ensures it will never happen, but it's a high price to pay for a few seconds of slightly less throughput.

There is more to this drive than it appears. Full addressable RGB support only comes from a couple of motherboards. The rest of us will need to settle for color changing effects. The heat sink does a good job, but you pay a lot for it.