While we desired a USB 2.0 port and a edge stitched soft pad, what Logitech set out in the Powerplay Wireless Charging System for the G703 and G903 mice is spectacular. Logitech has the best idea out, has choices of surfaces, but you do have to dig deep to afford one!

Had this been just about any other mousepad on the market, we would have likely shoved it into the back of a mouse review, but what you are about to see is something entirely different than all of the rest. While there is a similar concept from Corsair that we thoroughly enjoyed using, Logitech takes a slightly different approach to make time with their wireless mice so much more enjoyable. Where Corsair has a defined area for QI charging, Logitech says screw the phones, and opts for a different technology, which allows the entire pad to be a charger, no matter where the mouse is positioned at that time.

Logitech has come forth with something called Powerplay, which is designed to work with some of the wireless mice that have the round hole under them, typically used to magnetically attach an optional weight into the base of the mouse. However, as time has passed since this came about, Logitech has found that this same area can also be used, with an additional bit of hardware, to charge their mice without the need for a cord or some form of a base. However, it takes a system to make all of this happen, and this is where the Powerplay mouse pad comes into the picture.

What we are about to show is a mouse pad that does not just come with multiple surfaces to suit any gamers preference to a cloth style or hard card surface. Think of this mouse pad being made much like you do radiant floor heating, with a coil running back and forth across the pad, with both ends connected to a hub, which via USB connectivity, can deliver enough power to charge a mouse nearly anywhere it is placed on the pad. This is what makes the Powerplay mouse pad stand way above the rest, and for anyone with a newer Logitech G903 or G703 wireless mouse, this is a must-have addition to your arsenal, which will make your time with both of them much more enjoyable. 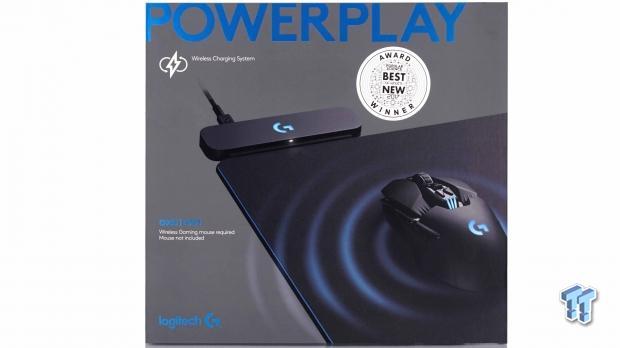 On the front of the box, the Powerplay name is blue and bold across the top of the panel. There is a mention of the wireless charging system as well as a Best of What's New 2017 sticker, just above the image of the Powerplay with a G903 placed on top of it. 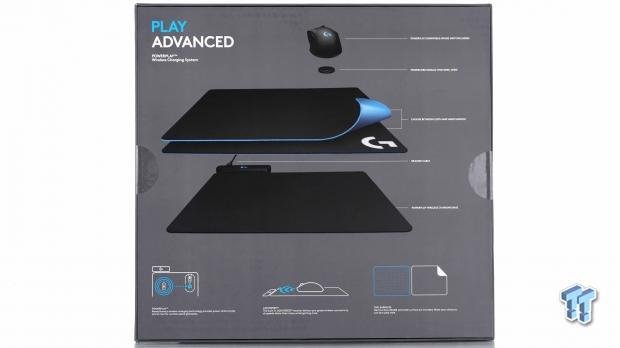 All other information is found on the back of the box. It is here that we see we need a Powerplay compatible mouse, but the Power core module for charging is included. You can choose between a flexible cloth or hard surface to move the mouse on, both of which set on top of the base. Connectivity to the PC is done with a provided braided cable, which is thicker than those that come with the G903 and G703 mice. 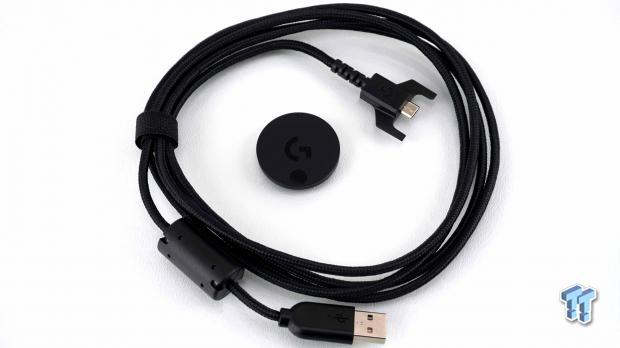 Before we get into the mouse pad, we are taking a look at the included hardware that comes along with it. There is the USB 2.0 cable which is 1.8 meters in length, it is braided, and it even comes with a strap of Velcro to keep the wire tidy. In the center of the wound cable, we also see a puck that replaced the weight cover that comes with either of the compatible mice and is the receiver for the wireless charging system. 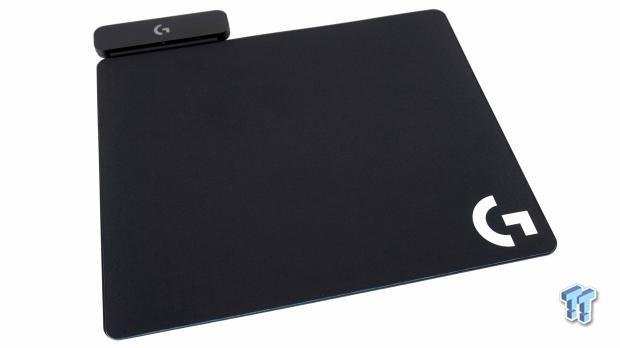 Fresh out of the box, we get our first look at the Powerplay wireless charging mouse pad. Currently, the wireless charging base of the Powerplay is covered with the rubber backed, cloth topped, mouse pad, sporting the Logitech G logo. At the back is the hub, where you connect the USB cable, and there are a pair of LEDs which indicate the power of the mat as well as a much smaller one to denote if it is actively charging. 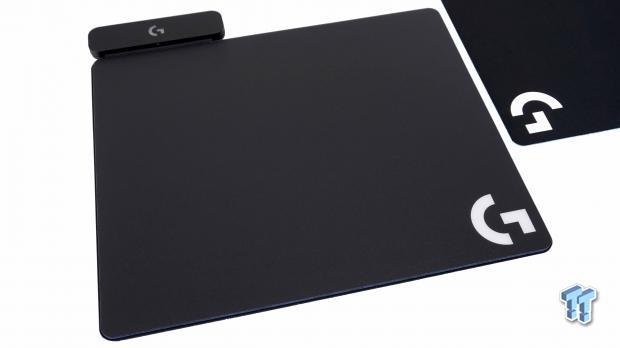 In the box, is yet another gaming surface, which is now on the Powerplay base. It, again, is rubber backed, but this time the surface is made of hard plastic, which is slicker than the cloth for ease of movement. The hard top also sports the same Logitech G logo, and neither surface slides around since the Powerplay base is also rubberized, which adds grip between the bottom and the top surfaces. 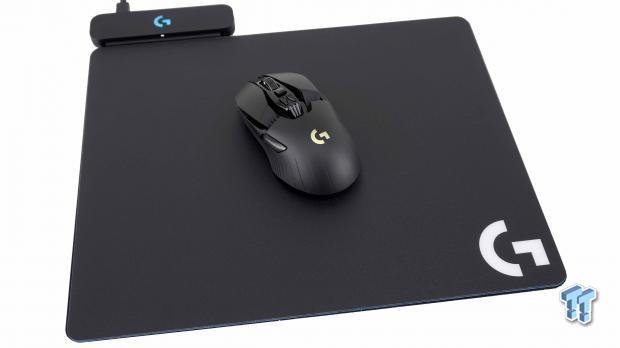 Once plugged in, we have placed the Logitech G903 mouse on top of the hard surface to see what shakes. Not only do we get a sense4 of the size of the Powerplay system, but we can also see that the LEDs are active. The G logo lights up on the hub, but to get the tiny white LED to illuminate, the mouse much be charging. The mouse can be placed anywhere on the mat, and once the level of the battery drops below 86%, the Powerplay pad will start to charge the mouse. Also, the mouse can go nearly anywhere on the pad and be charged, without hunting around for a specific location as in other products similar to this.

At the end of it all, if, like us, you own a G903 or the G703, there is no better accessory for it on the planet. The only downside to this product is that Logitech likely won't license the technology needed so that all wireless mice could reap the benefits. While Corsair does have the ability to charge a phone, which is cool and all, but issues were locating and utilizing the QI charging on it.

This is something that Logitech has done much better, as the entire pad is a charger, and no matter where you leave the mouse for the night, or while it is resting when maps load of you troll someone on the internet, after about thirty seconds of stationary positioning, the mouse will get a charge. 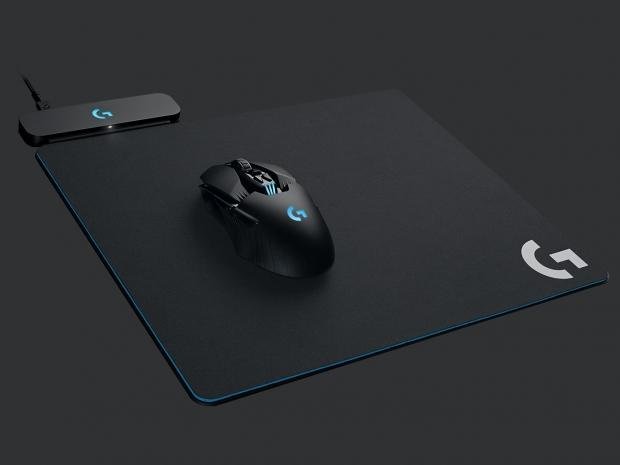 You do need to keep in mind that the only cable to provide the correct power requirements is the one that comes with the Powerplay pad. We had tried to use the mouse cable since it was there and found the logo will illuminate, but charging will not happen. One thing we do wish would have been built in was a USB 2.0 port at the hub, as then you could plug the receiver into the Powerplay rather than at the back of the PC, but this is not a deal breaker, more of a random thought to improve the proximity of it to the mouse.

Shipping with dual surfaces is also a huge benefit to many. Even if you are not a fan of one or the other, it gives you a way to test out DPI settings on both, so that while you may think you prefer one over the other, you can sort it out once and for all with all other things being equal. Even if you never plan to move from cloth to a hard surface, or vice versa, think about it as Logitech giving you a mouse pad for another PC then.

Everywhere we looked, we see that the price is the same, with just a couple of locations offering them ten cents lower than others. Be ready for this, as the coolest accessory to hit wireless mice does come with a horse pill sized price point. If you own either the Logitech G703 or G903 mice, this must-have compatriot will set you back $99.99. While in any world, this is steep, but having messed with docks, cords, specific QI locations, this is by far the best option on the market today.

You have to look at this in the right perspective, and when it comes to a dead or near dead mouse, due to bad pins in a dock or you didn't push the cable in all the way overnight, with the Powerplay Wireless Charging System, this is never an issue. Logitech takes away all of the guesswork, and if you see the tiny white LED on the hub lit up, you are good to go as far as charging is concerned, and when you are ready to work or play again, jiggle the mouse to wake it up, and away you go with a freshly charged wireless Logitech G mouse.

The Bottom Line: While we desired a USB 2.0 port and a edge stitched soft pad, what Logitech set out in the Powerplay Wireless Charging System for the G703 and G903 mice is spectacular. Logitech has the best idea out, has choices of surfaces, but you do have to dig deep to afford one!