While we have seen just about every incarnation of RAM from Corsair, it appears they are not yet finished with optional kits to spend your money on. We have had everything from the ordinary Dominator Series kits, through the Vengeance line, and even seem some specialized kits that were limited in supply, but in all the samples we had, we have never had an issue with compatibility, as long as we had the right components in our test systems. There are others with this sort of track record too, but there are some companies, that we have had to fight tooth and nail to get them to work with the XMP profile active as well.

With what we have in our hands today, it has to be the third, maybe even the fourth set of 4000 MHZ memory to be delivered by Corsair. Of course, many may not appreciate the need for such speed in DDR4, but we can ensure that there is one aspect about the new memory that will attract the masses. The Vengeance Series gets a new SKU, beyond LP, LPX, LED and the RGB, we now have a new contender with the moniker Vengeance RGB PRO. Sadly, the significant changes between the Vengeance RGB and the RGB PRO kits are the design of the heat spreader and the light bar at the top.

Combine everything we have mentioned, and we have the Corsair Vengeance RGB PRO DDR4 in the 4000MHz flavor to review today. Using the XMP 2.0 profile with a CPU capable of running said speed, the timings offered are 19-23-23-45 2T. VDIMM voltage is only 1.35V, and as to the IO and SA voltages, they are both cranked up to 1.35V to attain what Corsair intends this RAM to run. For those of you looking for high-speed kits to fill the motherboard, and want some of the best-looking heat spreaders from Corsair, along with motherboard or software controllable RGB lighting, then what we are presenting here may be of interest to you. 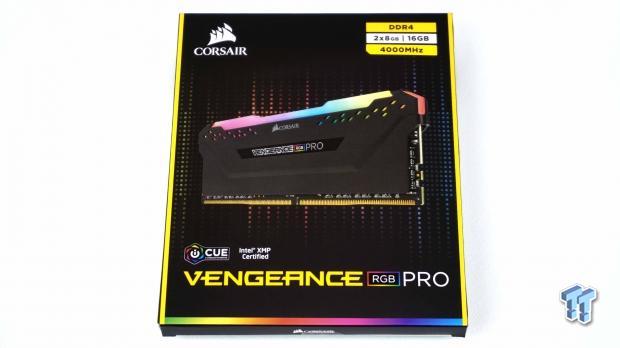 The black packaging with yellow trim is expected from Corsair, and the layout of information is similar as well. At the top, we see the company name along with the speed and density if the RAM inside. The image shows off the new heat spreader, and RGB LED light bar, while at the bottom, we see iCUE and XMP notifications just above the Vengeance RGB PRO naming. 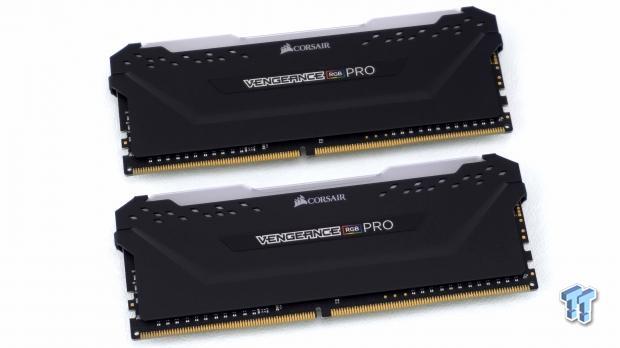 Fresh out of the box, we will start with the use of ten-layer black PCBs, which match with the matte black heat spreaders. The name of the memory is centered in the heat spreader, and rather than angles slots, this time we have angled cubes that allow light to shine through them. At the top is a light bar that goes end to end, the design matches the angular heat spreader shape, and the top edge of it has ribs running the length of them. 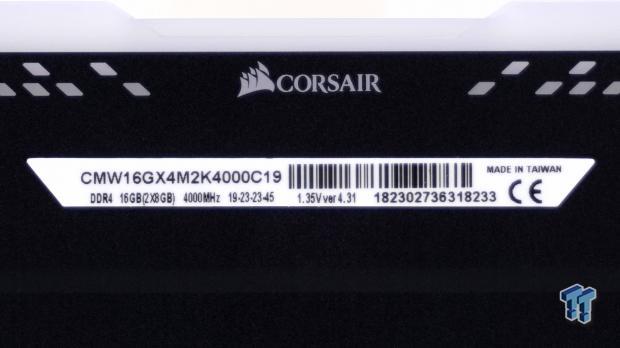 The other side of the sticks is identical in appearance, all down to one thing, the product sticker. Unlike many other companies who place a large label anywhere it fits, Corsair uses the same spot the Vengeance RGB PRO sticker was found in on the reverse. We can see the CMW16GX4M2K4000C19 part number, along with the density, speed, timings, version number, the voltage, and the serial number. 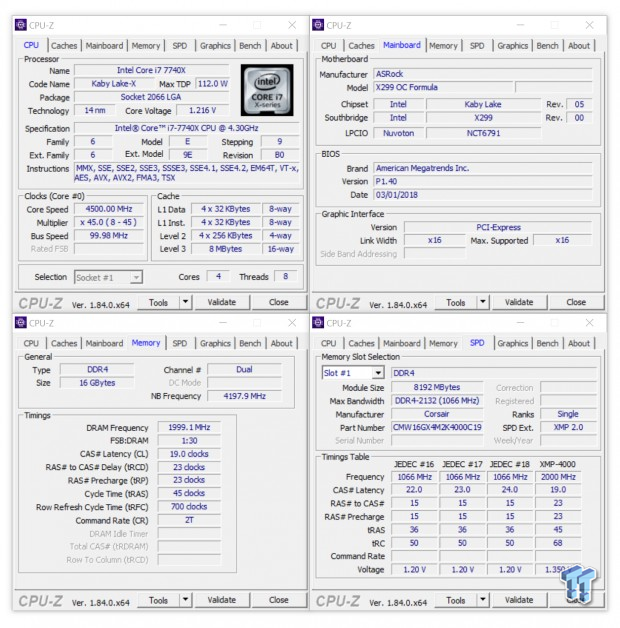 With one quick trip through BIO's to enable the XMP 2.0 profile, our Corsair Vengeance RGB PRO is running as intended with the next boot. Everything is as we expected to see, with speed at 4000MHz, and the timings of 19-23-23-45; that tRFC though. 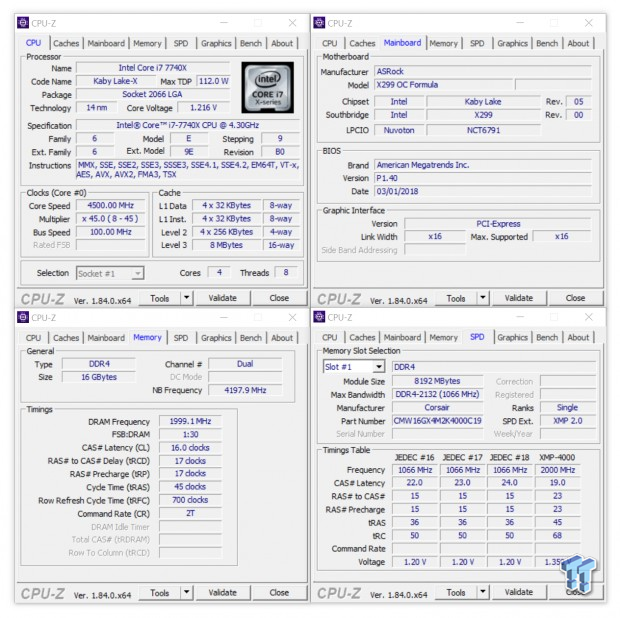 Since these are Samsung B-Die ICs, lowering the timings is easy to do. Going back into BIOS to set the VDIMM at 1.45V and only increasing the VCCSA to 1.40V, we got them significantly lower. Stable in Windows and all testing, we now have the Corsair Vengeance RGB PRO DDR4 at 4000MHz with the timings of 16-17-17-45 2T. 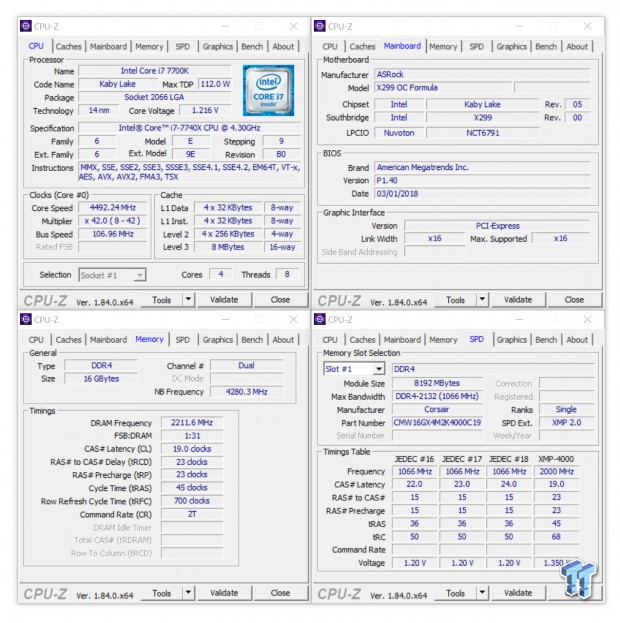 Starting from the XMP profile again, we next tried adjusting the memory speed but had to change the BCLK due to limitations of RAM dividers in the BIOS. What we ended up with is the BCKL at 107, using the 4133MHz divider, which gives us a maximum speed of 4420MHz. 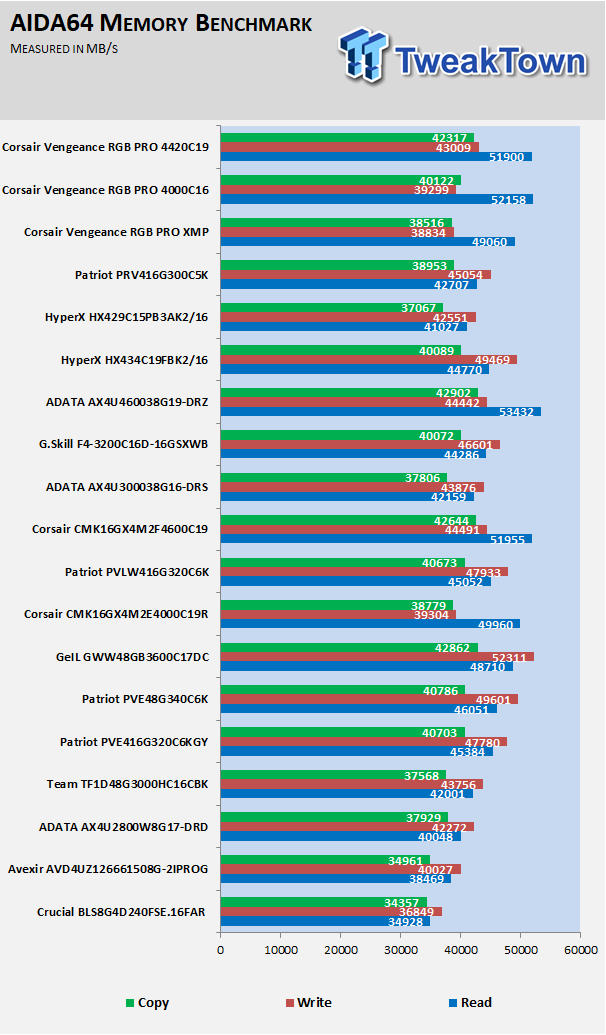 Using the XMP profile as the baseline, the read speeds are fair and are beat only by faster kits, and the other 4000MHz kit of Corsairs on the chart. Write and Copy speeds are poor, however, and are handily beat by many sets of RAM we have tested. Once the overclocks are tested, the Reads go through the roof, but the Copy and Write performance is still lower than expected. 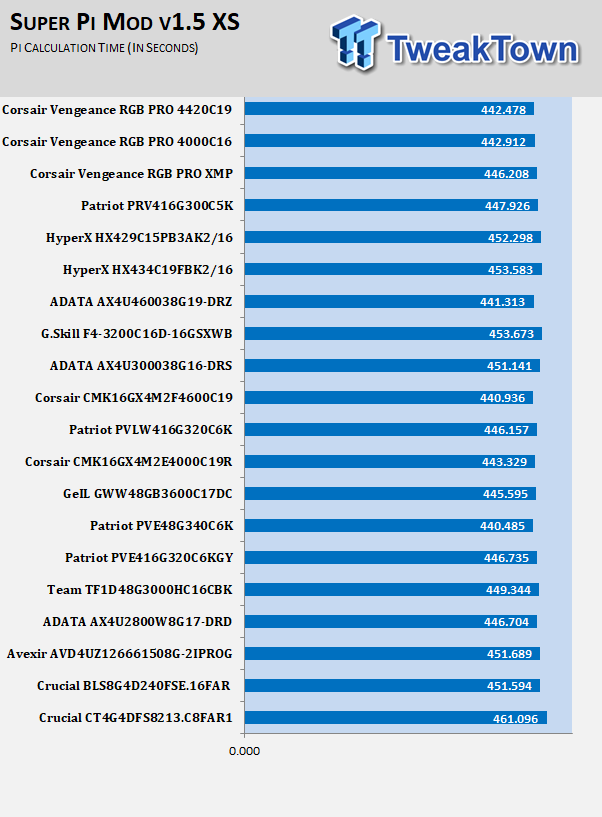 Calculating pie does not bode well for the Corsair memory either. While a couple of the kits in the chart are faster in speed, it does not help that seven in total outperform the Vengeance RGB PRO memory. Lowering the timings and maximizing the speed offer similar boost to the memory, where this time only three sets are better, but one of them is a 3400MHz kit of Patriot. 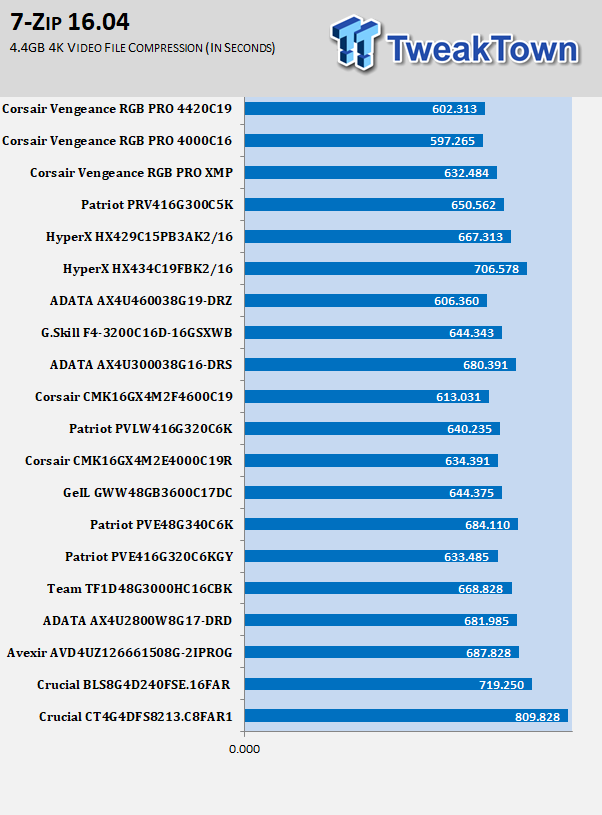 In compression, the Vengeance RGB PRO handles its business. This time only two kits delivered better results than the XMP profile, and with the overclocks applied, there isn't a single result better than either of them.

In the end, what we do know are two things. Corsair stepped up their game with the newly styled Vengeance RGB PRO for starters. Not only are there new heat spreaders, similar to what is found in the Vengeance LED, but unique in their own right, but the iCUE or motherboard controlled RGB LED light show is some of the best in the game. On par with what G.Skill produced, which we have been comparing all other RGB illumination to since we saw them.

The second thing we know is that performance is not all we expected for the speed of the kit we tested. Timings are a considerable factor in the performance, but the previous 4000MHz kit of Corsair memory did better with all things equal. Although, when it comes to tinkering with this DDR4, we were able to achieve lower timings as well as a higher top speed than the previous LPX sticks. 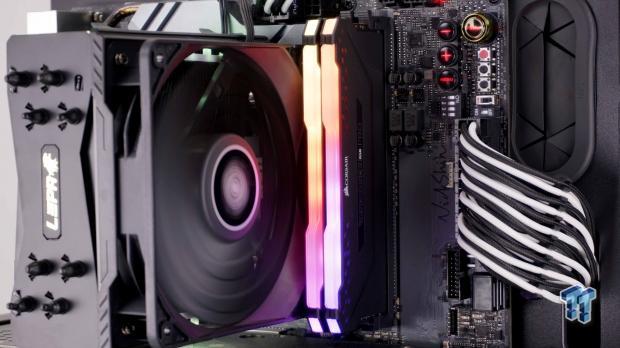 We find this a tight spot to be in. We adore the way the RGB lighting is presented, we think that using black PCBs and black heat spreaders is the way to go to match any build to increase market share, but our testing has us questioning if looks supersede performance. In our opinion, aesthetics do matter, but for our usage, we feel performance is the number one way of classifying RAM. That being said, AIDA64 did not shine a bright light on this kit, SuperPi times were a tad slow for our liking, and it was only when it comes to large file compression that we saw the love Corsair is trying to offer. For those looking for memory oriented towards production, by all means, have a long look at the Vengeance RGB PRO. For the gamers and benchmarking types out there, we feel there may be better options for those uses.

The CMW16GX4M2K4000C19 Vengeance RGB PRO from Corsair will undoubtedly grab your attention initially. With a superb display of lighting and heat spreaders that are not over the top in styling, while matching any system available are all great reasons to ponder this DDR4. At $315.99 at Newegg and Amazon, it is some of the most expensive DDR4 at this speed, with these timings. The only kits we found that require more investment are G.Skill sets, but both of them offer that same speed with lower timings. With all thing considered, you will be the envy of all of your friends putting the Vengeance RGB PRO into your PC, but the lack of performance is hard to ignore. While we still recommend you give these a try at some point, if, like us, performance is the key, you may want to keep looking.

The Bottom Line: The are flashy and sleek all at the same time, they are fast, and the Vengeance RGB PRO from Corsair is the latest and greatest out there. However, cost and performance are limiting factors, which keeps them from an Editor's Choice award!