Back in the sweet spot for many users, we now have a set of memory with speeds which are more attainable on just about any system running DDR4. In this new series from Patriot, we are shown that there are two choices in LED illumination. Buyers can choose from red LEDs or white LEDs, and these kits range in speeds, with 2400MHz, 2666MHz, 3000MHz, and 3200MHz kits are available with the red LEDs, while the white LED versions omit the 2666MHz option and offer a 3600MHz kit instead. That being said, they all conform to a more standard approach to the XMP 2.0 profile, with voltages ranging from 1.20V on the two lower speed kits, and 1.35V used for the kits at 3000MHz and beyond.

Patriot has sent the new Viper LED RAM for us to tinker with and deliver a verdict on it. Specifically, we have the PVL416G3200C6K kit, which boasts a speed of 3200MHz, has timings of 16-18-18-36 2T and uses 1.35V to power the sticks and the LEDs. These limited lifetime guaranteed sticks employ an XMP 2.0 profile, which means they are pretty much plug-and-play in any Intel system utilizing DDR4. Pricing of said kits ranges from just $134.99 for the 2400MHz kits but does break the $200 barrier to obtain the 3200MHz RAM we are going to show you here.

Hopefully, with the new system in use, we can have some fun with the Patriot Viper LED 3200MHz kit, as well as comparing them to other XMP profiles in our charts. All we have left to do at this point is to show you what you get by purchasing these kits, and run them through their paces and see just how well the newest series of DDR4 performs from Patriot. 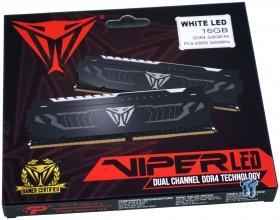 The box in which the memory is shipped inside of reminds us a lot of the Viper peripherals, with the huge Viper logo and the red and black background. We see both sticks in the middle of the front panel, while above them is a bright white sticker denoting that these are white LED versions with two 8GB sticks at the speed of 3200MHz. At the bottom, we see that this memory is gamer certified, whatever that means, and that this is a dual channel kit. 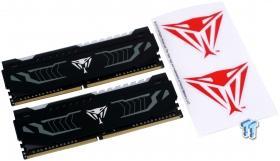 Just like with their peripherals, inside of the box, we not only get the product, but Patriot has included a pair of Viper logo stickers as well. As for the memory, it is sleek looking with the black PCBs and the large black heat spreaders. The shape of the spreaders is unique, and along with exposed metal Viper logos on either side, there are areas of gray paint which help to bolster the styling of this DDR4. 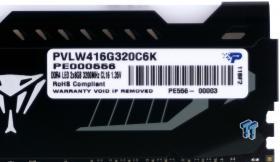 On the flip side of each RAM stick, we do find a product sticker which has been shifted off to the right to allow the logo to go unimpeded. On this sticker, we can see the PVLW416G320C6K part number along with the density, speed, CAS latency, and the voltage needed to run them at their rated speed.

While the heat spreaders are made in two pieces, they only come together at either end of the sticks. This placement allows Patriot to insert a white plastic top with its longer flat section sporting the Viper name, and the second part of them in a sawtooth pattern. For many users, this is what you will see most of this kit while in use, and we do have to say it is an attractive look to add to just about any motherboard.

While typically we would show an image of the ICs used, trying with heat and cold, we were unable to remove the heat spreaders from these sticks. What makes things even worse trying to identify them, is that Patriot blanked out the SPD information, which means Typhoon Burner also failed to help us with the identification. 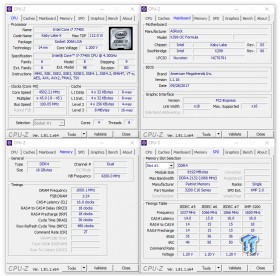 After clearing the CMOS, booting the system, and enabling the XMP 2.0 profile in the BIOS, we rebooted the system to find this. The Patriot Viper LED memory posted to the desktop at 3200MHz with 16-18-18-36 2T timings. Going back into the BIOS one more time, we also confirmed the 1.35V used for the memory, as well as the use of 1.20V used for the VCCIO and 1.35V used for VCCSA. 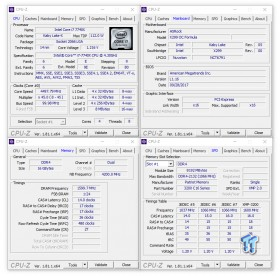 After some tinkering and testing, this is as low as we could get the timings. Using 1.45V for the memory, adjusting the VCCIO to 1.35V and leaving the VCCSA alone, we were able to get 14-17-17-36 2T timings out of the Viper LED. While this may not be as low as we have seen in other kits, we do still appreciate the flexibility left from the binning process. 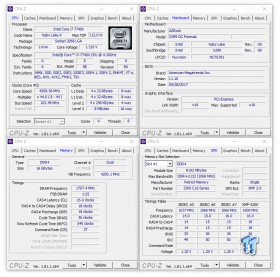 Our last attempt to adjust this kit for more was to address the speed of the kit. Again, not a huge gain in speed, but we were able to increase it just beyond the 3400MHz mark. At this time, the kit does require 1.45V to run at this speed, any less and they become unstable. As for the VCCIO and VCCSA voltages, they are both set to 1.35V at this time too. 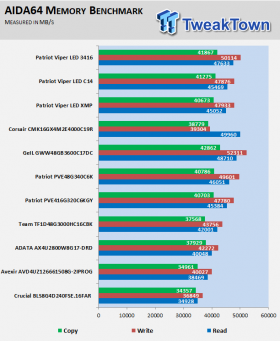 Comparing apples to apples, we can see that while looking at the XMP results, the Viper LED kit is nearly identical to the other 3200MHz kit in the chart. Lowering the timings delivers more bandwidth, which is closer to the 3400MHz kit shown here. Using raw speed to test with, the Viper LED does not quite make it to the results we see from the 3600MHz GeIL memory, but it is pretty darn close. All in all, this is a good showing for Patriot. 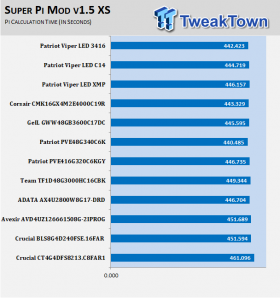 Running Super Pi 32M the Viper LED time is near the other 3200MHz kit as we would have expected it to be, so no issues there. Lowering the timings put the results in between the 3600 and 4000MHz results which is outstanding. While 3416MHz is not the fastest kit in the charts by any means, we were able to produce the best time on the chart. 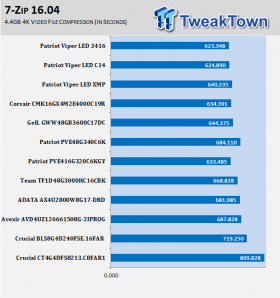 Video compression bodes well for the Viper LED memory, but not in all aspects. Not quite as good as the other Patriot 3200MHz kit using the XMP setting which is a bit of a downer. However, using lower timings puts up an impressive time, and adding speed to this set of DDR4 puts up another chart-topping time.

From what we have seen in the performance department, we can say that these Viper LED sticks are some of the best you can get for their rated XMP 2.0 profile speed and timings. They compete with kits with more speed in our charts, and if you enjoy tinkering with the memory, you can surpass faster kits by lowering the timings, or on the other side of the coin, a slight bump in speed to this set of memory will drive results past kits nearly 200 to 600MHz faster. That in itself is a huge accomplishment, and while we doubt that these are Samsung based sticks, Patriot is still able to deliver the goods.

There is only one downfall to the memory as we see it, and it is visible in the image you will find below. Patriot did so well with the heat spreader design, and we like the white plastic insert, assuming the entire thing would glow bright white, but that is not the case. Once powered, the Viper LED has four bright spots in the white plastic from the SMD LEDs places evenly across the top edge of each stick. While this is not a complete design killer, we would have liked it much more of the LED placement was not as visible, and the entire top would glow with an even glow of LED lighting. 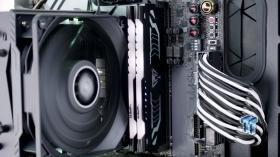 Funny enough, when we looked for a retail listing of the Viper LED 3200MHz kits, we come up with nothing. We do find 2400MHz kits and those at 3000MHz, but there are no listings for 2666 or 3200MHz. So, from this, we can only guess at the pricing for the Viper LED 3200MHz kits. A quick trip over to Newegg does show the Viper LED 3200MHz kit listed at $209.99 but is currently out of stock, which removed the guesswork on our part. That price point put them in range of other, better-illuminated options though. You could opt for Vengeance LED, GeIL Super Luce, Team Night Hawk, and if your wallet has some room to wiggle, you can even opt for G.Skill TridentZ RGB sticks with amazing LED illumination for just $20 more. While the Patriot Viper LED do top the charts in performance, we just wish they had delivered illumination on par with all of the others on the market, so that Patriot could hold the crown for all-around benefits in performance and aesthetics. We will not say you should not buy this kit, just don't expect amazing things in the lighting department.

The Bottom Line: Patriot's Viper LED look stunning right out of the box, and after testing, we found the performance to be on par with similar kits. For overclockers, there is much performance to be gained, delivering chart -topping results, but sadly, the illumination is not up to snuff.