If the need arises that you need to purchase more RAM for an older system, or you are building a new one, it never fails that G.SKILL is one of the top three names to come out for advice. From what we have gathered in the many sets of memory already provided by G.SKILL, we have seen superior styling in all the lineups, and if you are the type to go high-end, the TridentZ series has something for every build. Another huge advantage to a company such as G.SKILL is that never fail; they are always found on any motherboards QVL.

Those of you who are G.SKILL fans, and have liked all the variations of TridentZ memory, we have one more SKU to add to the lineup. Following where the trends may take them, G.SKILL has opted to move to RGB LEDs in their heat spreaders. Unlike many others, G.SKILL developed a proprietary RGB LED system, which adds more flair over the standard offerings, delivering LEDs which will show motion as well as a multitude of colors. Of course, these kits also have Aura Sync support, which means ASUS motherboard users can use their software to change the LEDs on the kit to a multitude of patterns, sync them to the motherboard, or set them to the desired color all of the time. The choice is yours to do as you wish, with very little as far as limitations are concerned.

The kit we have on hand to demonstrate the potential of this new addition is the F4-3600C16Q-32GTZR, but G.SKILL offers these kits in a range of 2400MHz to 4266MHz speeds, with latencies from 14-14-14 to 18-19-19. Voltage also fluctuates per set, as the lower speed kits can use 1.20V, the midrange will use the standard 1.35V, but if you opt for the 4266MHz kit, the XMP 2.0 profile will set the VDIMM to 1.40V. Density is also something worth mentioning, as you can get these TridentZ RGB in a range of density from 16GB kits on up to 128GB. All of the TridentZ are sent out with a lifetime warranty, and if the past is any indicator, based on high-end memory ICs, there should be some fun to be had for those who like to raise the speed or reduce the timings. 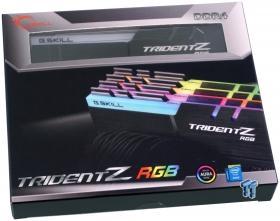 Right away, the packaging differentiates the RGB memory from all other TridentZ memory, not only with the letters RGB at the bottom, but the image also shows off the independent RGB LEDs found on each stick. There is a clear window near the top to show what is inside of the box, and we also find indications to the ASUS Aura Sync and Intel compatibility. Inside of the box, we found the RAM to be packaged without much care, and there is visible wear marks on the black brushed heat spreaders.

The opposite side of the sticks is very similar to the first side we looked at, but this time the color of the heat spreader is gray. It is also on this side where we find the product stickers. There is a hologram on the left, the model number tops the sticker, and we see that the XMP 2.0 profile is set to run this kit at 3600MHz with 16-16-16-36 timings, using 1.35V to do so.

The business end of the TridentZ memory is the top edges, where we can see both the gray and the black fins raising above the plastic center accent piece. So, everyone who sees them knows, G.SKILL put their name at the top edge, and in that plastic trim is where all of the RGB LED goodness happens. 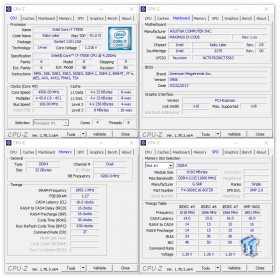 When it came to booting our test system with the F4-3600C16Q-32GTZR memory, we enabled the XMP profile, and all was well. The kit is at 3600MHz with its rated timings, using 1.35V to power them. However, we also noticed that the VCCIO set to run them was 1.272V and the VCCIO was at 1.264V, both a touch high for the safe zone colorations in BIOS. 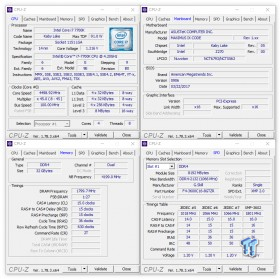 Using all of the tricks of the trade to try and lower the timings for this kit, we found that they bottomed out at 15-15-15-36, no matter if we raised the VDIMM to 1.45V or not. We also tinkered with raising and lowering the VCCSA and VCCIO voltages, but nothing allowed us to obtain lower timings with this kit.

We do not have an image showing the speed increase, simply because we found no ability to do so. Trying 3733MHz as well as 3866MHz settings in the BIOS brought is to POST code errors in all of our attempts. We do know that this kit is using Samsung K4A8G085WB-BCPB B-die ICs, but we did not experience the same love earlier kits delivered in this aspect. 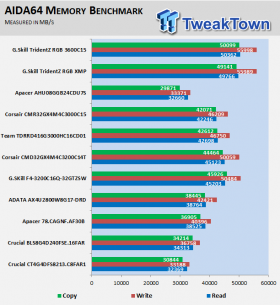 With results such as these found in AIDA64 testing, there isn't a reason to tinker with this RAM. Of course, this memory is the fastest set we have tested on this system but left alone, or with the timings lowered, the TridentZ RGB is in the lead by a wide margin. 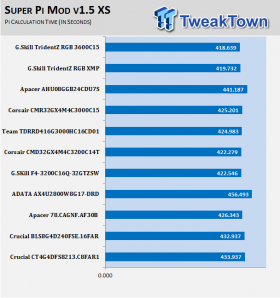 The less time it takes to run Super Pi 32M, the better it is for the memory being tested. While not such a dramatic decrease in time, using the XMP profile the TridentZ RGB sticks are 2.5 seconds faster than anything on the chart, and we lost another second lowering the timings. 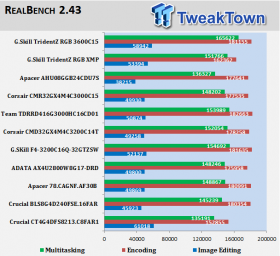 RealBench seems to be the equalizer, as the gaps from kit to kit are marginal at best. However, while using the XMP profile, the TridentZ kit is outshined by many slower sets of memory in the chart. It wasn't until we lowered the timings that we got the results we were expecting from the XMP profile.

The opinion we have come to at this point is that while the TridentZ RGB keep all of the sexiness of the TridentZ line, they also deliver with RGB LEDs that will match a theme or trickle colors down each stick randomly right out of the box. We did find software from G.SKILL, which is still in Beta form, and to us, still, needs some work. We had much better success using the latest version of Aura Sync from ASUS. Many of the abilities are the same in both GUI suites, and also as a side note, it is advised not to run both, as it can and will cause issues with the RGB LEDs ability to function in the desired fashion. As you can see in the image below, the lighting is brilliant, and we have the RAM set to mimic what the motherboard is doing as it cycles through all of the RGB spectrum of color options. 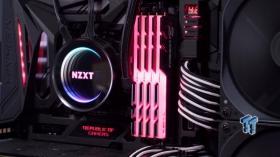 Sadly though, with the fancy new lighting scheme, G.SKILL seemed to forget what makes the TridentZ sticks such a hit across the globe. Many will opt for G.SKILL TridentZ for the near certainty of Samsung B-die memory ICs, which is more than just a little fun when to comes to trying to pry more performance for your DDR4. We were able to lower the timings without any additional voltage needed, but only slightly, and we hit a brick wall. Almost every other kit of TridentZ DDr4 memory we have tested before this, we saw 300 to 400MHz increases in speed, and this time there was not a drop left to give. With what we see, you are indeed trading something that looks awesome, for kits that should clock like mad, but don't.

At this time, the F4-3600C16Q-32GTZR kits are widely available, but they do come with a premium price tag too. The best price we were able to find is at Newegg.com, where they are listed for $423.99, which is roughly $50 more than the traditional TridentZ kits. We do realize that RGB in any form is here to stay for a while, and manufacturers are expected to get with the times. However, even with a fantastic visual appeal, the TridentZ RGB kit we have here lost some of its luster. We expected better from this kit. Performance is decent, and better than most in some tests by a fair amount, but in our opinion, you need to fall in love with the lights to take this kit over any of the other TridentZ memory we have tested up to now.

The Bottom Line: XMP performance is the saving grace for the F4-3600C16Q-32GTZR memory. Lighting has to be the top priority to choose these over other TridentZ offerings, as this kit lost the ability to be overclocked. We do wish G.SKILL was true to their roots, but are still able to deliver the goods!