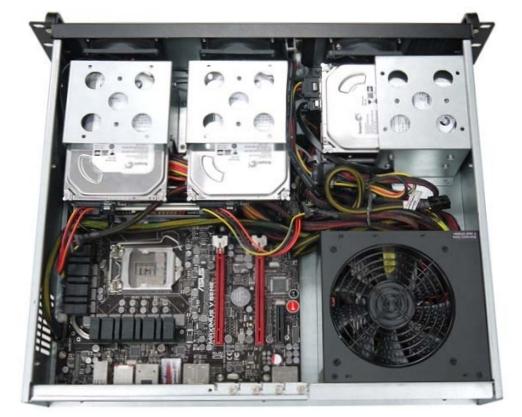 Our benchmark validation and test lab is growing again, so naturally we're adding more rackmount systems to the triple 42U racks. For over a year, we've had an old Pentium 4 based 1U system running Pfsense.

We found it's impossible for most consumer routers to serve more than a hundred IP addresses without running into problems. Just as difficult is putting up with the fan noise of a 1U Pentium 4 system coming from our DIY router. We've lived with it for long enough, but now it's time to reclaim some sanity by lowering the ambient noise of the room.

We've already tested Rosewill's 4U server rack cases, but we needed something smaller, lighter, and cheaper for this project. The Rosewill RSV-Z2600 fit the bill perfectly, and the $69.99 price point didn't hurt the wallet either. 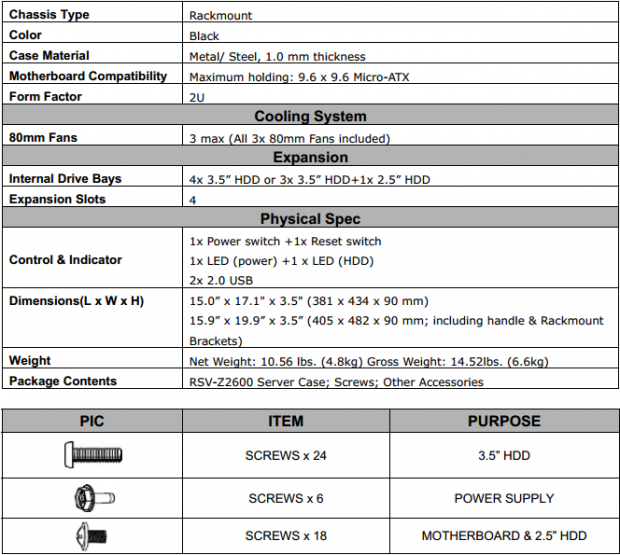 Built using 1mm steel, the Rosewill RSV-Z2600 is a 2U half depth rackmount chassis that can hold a Micro-ATX motherboard and four 3.5-inch HDDs. It ships with three 80mm cooling fans but is void of 5.25-inch bays, so you can't mount an optical drive. The case is perfect for building a low cost appliance like a router or DHCP / DNS server.

As mentioned in the introduction, the Rosewill RSV-Z2600 2U chassis costs less than $70. The 1mm steel chassis might not seem like much, but it's thick enough to keep the case from flexing under its own weight, something of a rarity on rackmount cases at this price point.

PRICING: You can find the Rosewill RSV-Z2600 for sale below. The prices listed are valid at the time of writing but can change at any time. Click the link to see the very latest pricing for the best deal. 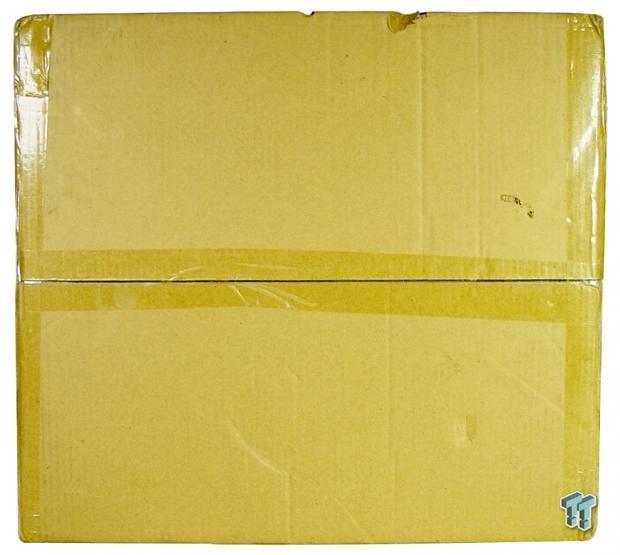 Our RSV-Z2600 cases arrived in thick cardboard, but they were not double boxed. As you can see, our box had a bit of damage. For review purposes, this works out really well as we can see how the package contents survived the UPS experience. 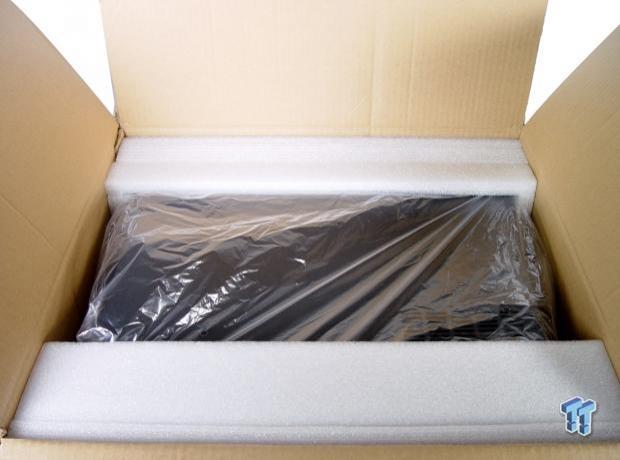 Everything worked out really well, and our case was untouched thanks to the dense closed cell foam. The case is more than an inch away from the sides of the box, and the packaging is around 2.5 inches thick at the corners.

Inside, we found a box of accessories. It included a paper user manual, screws for mounting components, and a mini speaker for the motherboard beep codes.

Here we get our first look at the RSV-Z2600. The case has two USB 2.0 ports, a pair of LEDs, a reset button, and power button on the front, but that's it. Most systems built-in this type of case are used for communication purposes, such as routers. 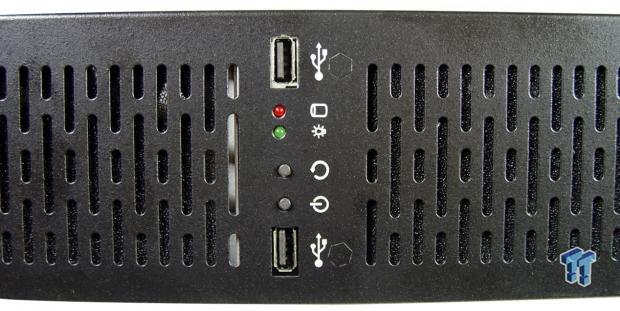 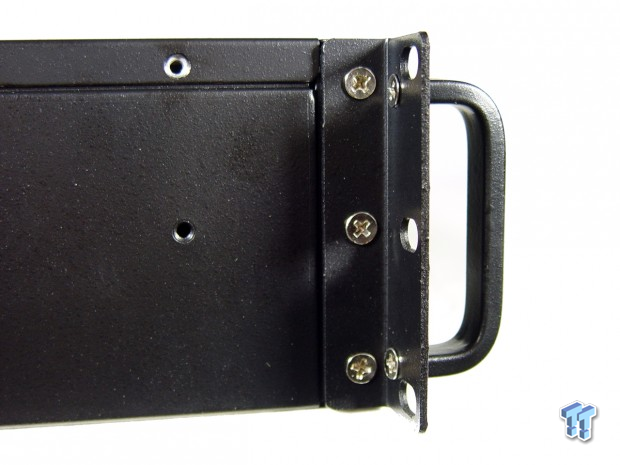 Four screws hold the top of the case on. The screws are on the side instead of the back. The case is only a half depth case, so it's light enough to use without rails, but that also means to get inside you'll need to remove the whole case from the rack. The front rack ears are strong enough to support the weight of the case, but we recommend using a lighter power supply and not a big heavy enthusiast style PSU.

Another vent near the CPU helps to keep the system cool.

The system can only use up to a micro-ATX or smaller motherboard, but it does accept a full size power supply. There are a handful of very good micro-ATX motherboards on the market, and most are very stable for communication appliance use. We're using something a little different for this build, though, since we're trying to keep power consumption as low as possible. 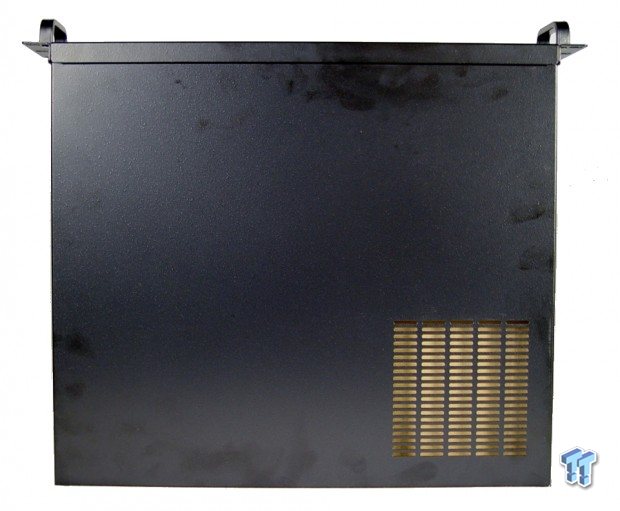 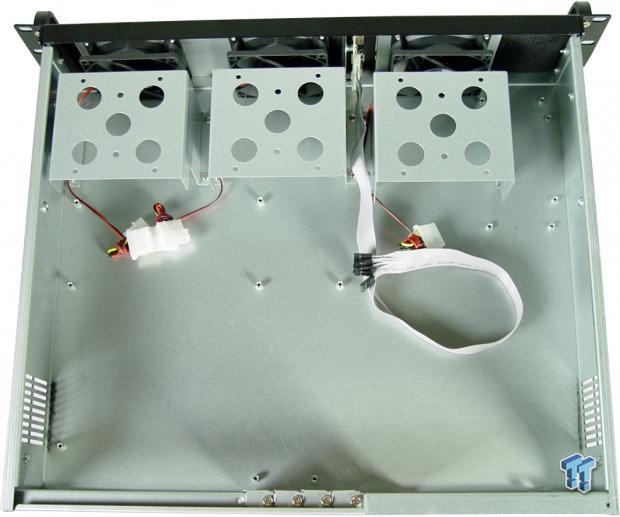 Here we get out first look at the inside of the case. Three trays hold hard drives above the motherboard. The two on the left hold one HDD each, and the tray on the right holds two hard drives. 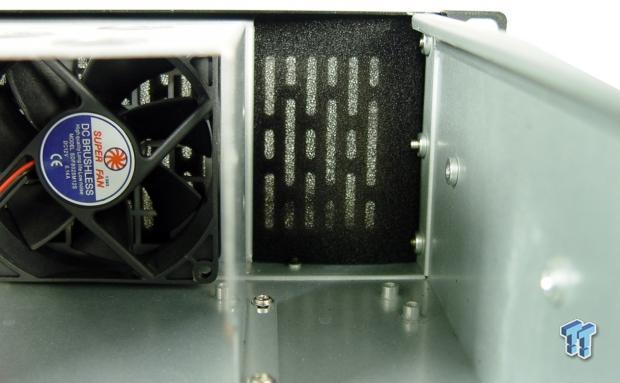 A foam mesh in the front helps to keep the dust build up down inside the case. Three 80mm fans in the front of the case pull cool air into the system. The fans use 4-pin Molex connectors but not 3-pin or 4-pin motherboard fan headers. 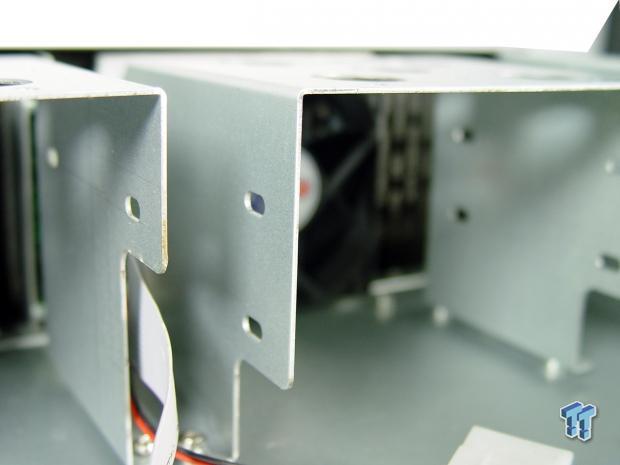 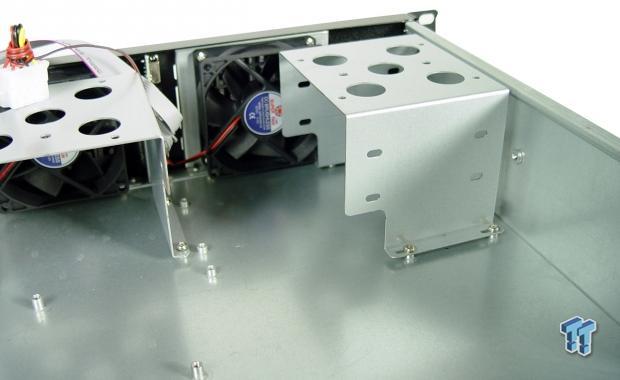 The right side HDD holder can flip to the side. This allows more room for the power supply and power supply cables. You can also remove drive cages that are not needed. 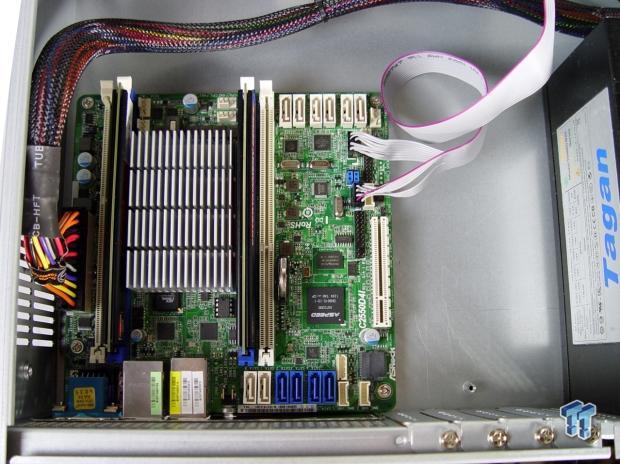 We're using an ASRock C2550D4I motherboard that has an Intel Atom C2550 quad-core processor for this build. The C2550D4I also works for NAS system builds since it has twelve SATA ports, four DDR3 slots, a PCIe slot, dual gigabit Ethernet ports, and an IPMI port for management with iKVM support. 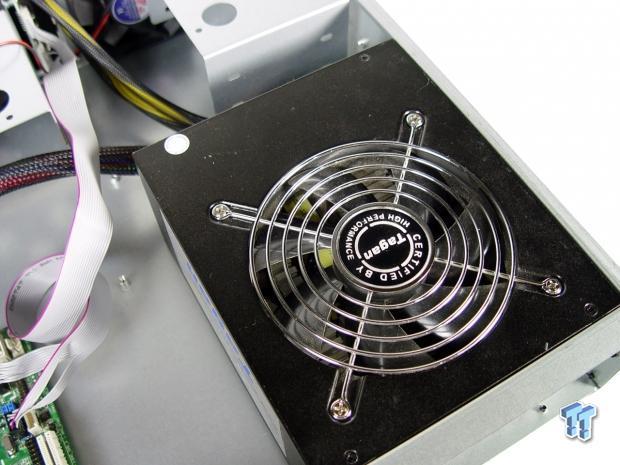 We had a spare power supply to use for this build, but the fan configuration means we can't put another rackmount case on top of the RSV-Z2600 and expect the power supply to survive for too long since it will block air flow.

A lot of thought went into designing the Rosewill RSV-Z2600. Even when we found issues, we can see why Rosewill chose the route they did. Fitting a full size ATX power supply in a 2U case means the case top and bottom meet the PSU, but Rosewill made a vent for users like us using older components. Ideally, we would purchase a new PSU with an 80mm fan on the front to keep the internal components cool, but that would increase the cost. Anyone targeting a $70 rackmount case isn't looking to spend a lot of money on the build, so cutting corners by using existing components is always nice for us DIYers.

Like the other Rosewill rackmount cases we tested a few months ago, the RSV-Z2600 is much better than what you expect to get for the money. I have rackmount cases that cost twice this much but are half the build quality. I would consider this model more of a specialty build since it lacks front drive bays, but it can hold four HDDs and motherboards with up to 4 PCIe slots, so you can build a nice little server in this case. The 2U design also works well when you're trying to conserve rack space.

It may not sound like much, but on the value added side, Rosewill includes three 80mm fans in the case. Again, when trying to keep the cost down, anything included necessity is nice since you won't have to buy more components.

If you plan to use this case without rails, then try to keep the weight of your components to a minimum. The ASRock motherboard use used in the build has an onboard Atom processor and an aluminum heat sink, so the entire setup is very light. The power supply, on the other hand, is heavy, so we may replace this before finishing our Pfsense build.

Overall, the Rosewill RSV-Z2600 is exactly what we went looking for. It's cheap, has nice build quality, and allows us to use existing components we had in the office.

PRICING: You can find the Rosewill RSV-Z2600 for sale below. The prices listed are valid at the time of writing but can change at any time. Click the link to see the very latest pricing for the best deal. 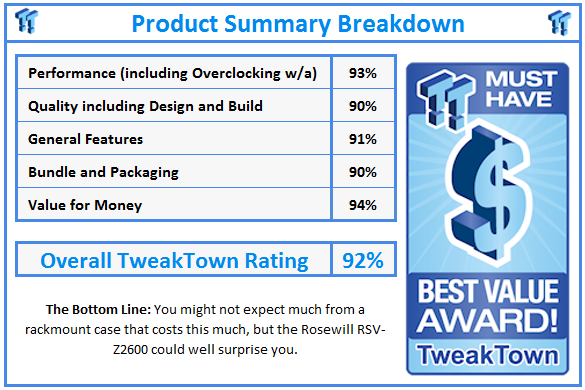