A few months ago, iWalk contacted me asking if I'd like to review a bunch of products, to which I of course said yes. A few weeks went past, countless boxes and samples arriving in my office, and then something heavy arrived.

I opened it up, and a box of iWalk goodies was inside, something that I completely forgot about. There were three mobile rechargeable batteries, and the crown jewel I had been waiting for: iWalk's Sound Angle wireless Bluetooth speaker.

First up, I'm going to overload you with some specs on this wireless speaker, before we take a look around the device itself. As you can see, it doesn't feature the best of specs, but it really does the job. We have a 2600mAh lithium-ion battery, a built-in microphone for on-the-go calls, and 3.5mm for auxiliary.

We have 5V / 1A for power and 2 x 3.5W speakers - which push audio out quite well I must say - but more on that soon. Let's take a look around the iWalk Sound Angle, shall we? 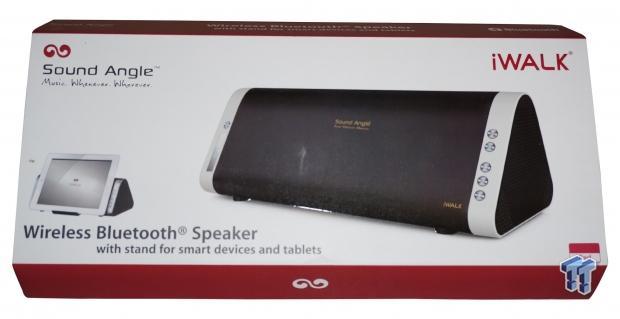 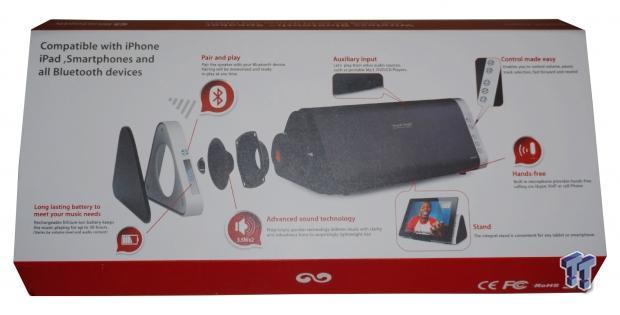 First up, the box that it comes on is quite in-your-face - it was one of the best parts of the device itself. It is presented extremely, extremely well, and as a fan of first impressions - iWalk were doing the moonwalk all over the place. 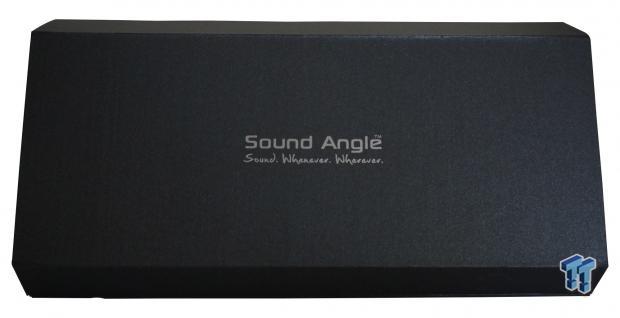 Once it's out of its box, you'll find it in another case - which has a flap down the bottom, which is magnetic. It's a nice touch, that's for sure. 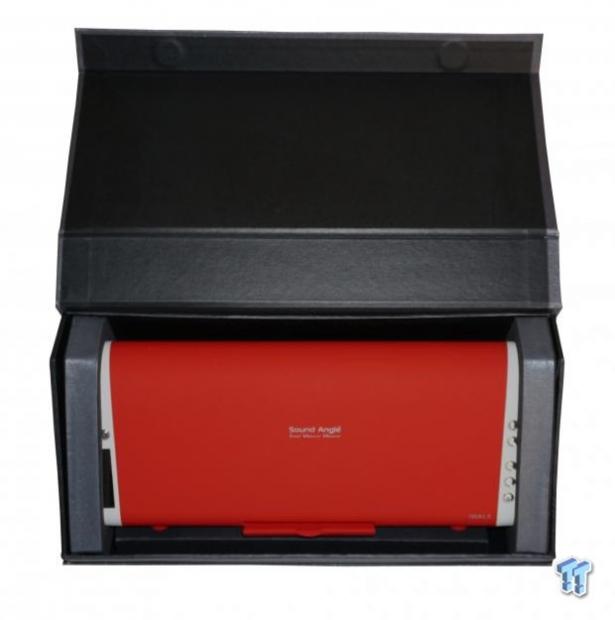 And we have it open! That magnetic part I mentioned just before, you can see the two magnets at the top of the picture, above. The Sound Angle itself is snug in the box, with some great protection from shipping. 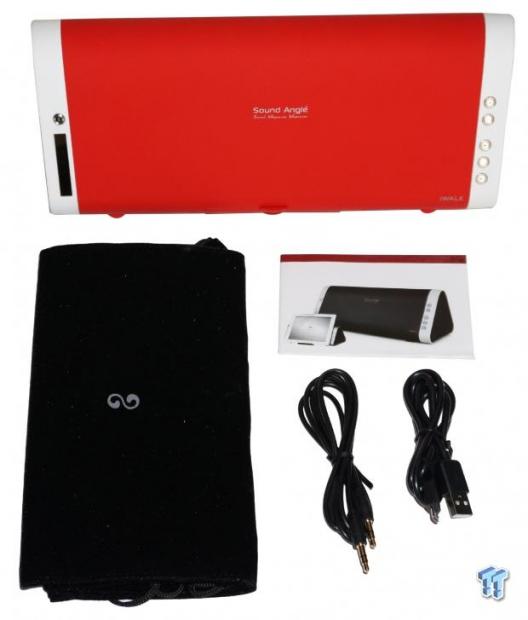 Out of the box, we find the Sound Angle speaker itself, a nice carry bag for it, an instruction manual, a microUSB to USB cable for charging, and a 3.5mm to 3.5mm audio jack.

Now we have the Sound Angle. iWalk provided us with the Red version, which looks quite good in person. Down the bottom, we have a dock for your smartphone or iPod, which is a nice touch, especially if your device isn't Bluetooth-capable, you can just plug it in through the provided 3.5mm port (and cable). 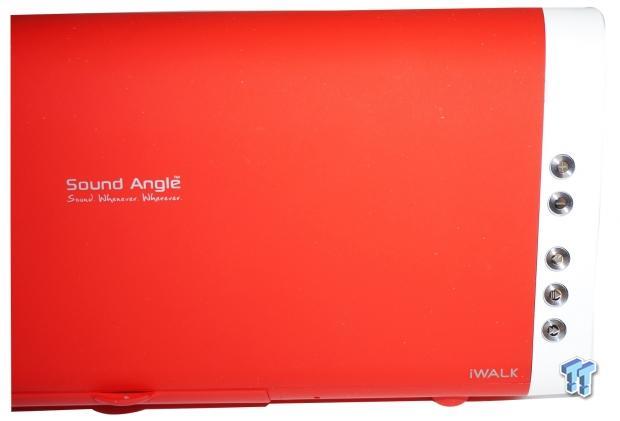 To the right of the device, we have some buttons to play with. From top to bottom, we have volume up, volume down, previous track, play/pause and next track. 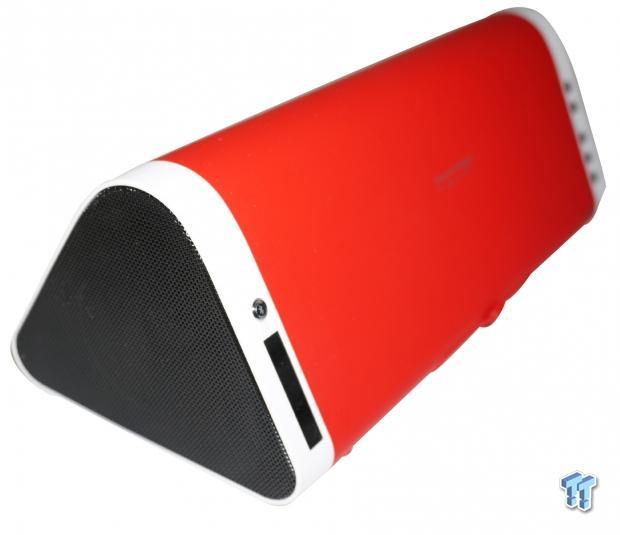 To the left of the device, we have the Bluetooth button, which is used to enable or disable Bluetooth. Under that, we have a cool little battery meter, which has a few bars that slowly disappear as the battery life is sucked out of it playing your tunes. 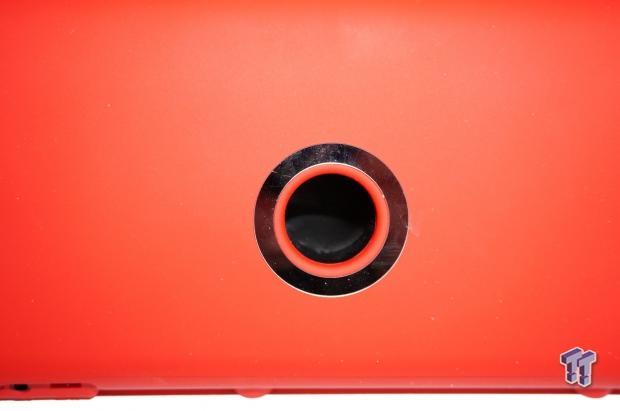 On the rear of the device, we have an open port so that the internal subwoofer can take in some air.

Below that, we have the on/off switch, 3.5mm jack, and microUSB port for charging. 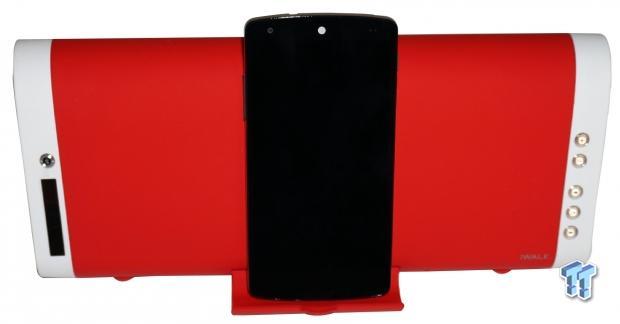 This is what the Nexus 5 looks like docked on the iWalk Sound Angle, it doesn't protrude out from the speaker that much. If you were to put an iPad (or similar sized tablet) on it, it would definitely take up a lot of room, but you can still access all of the buttons required.

As for pricing, iWalk has slapped a $129.99 price on the Sound Angle, which I think is a fair price given its build quality and features.

A Few Nights Out with the iWalk Sound Angle

I don't like testing these types of devices in a sterile environment - such as my office, so I took it out socially with me when I catch up with friends.

This way I can test it out in a variety of environments, which is perfect for a portable speaker. I used the iWalk Sound Angle outside, and it was surprisingly good outside. It was loud enough at times to have to turn it down, and being wireless, it was as easy as whipping out my smartphone and tapping the volume rocker a few times.

In a small room (enough for 5-6 people to be sitting or standing around), the speaker really stood out. It was echoing the sound off of the walls, bouncing audio around without a problem.

I did use it in my office on the first day, and had it cranked while I was doing some house work - it filled half the house with sound, something I was utterly surprised with. There are only two 3.5W speakers inside of this thing, yet it can blast out some surprising quality.

It is not too heavy to tote around, and the microUSB-powered side of it is great. One of the nights I took it out, it started running low on battery, so I plugged in one of my iWalk portable batteries into it (reviews coming soon) and it continued for the rest of the night, all while charging up.

You'll get around 6-8 hours of listening out of it, depending on the music and the volume it is being played at. I averaged around 6-7 hours over a testing period of two nights out, fully recharging it in-between, and a few hours here and there in-between, without it needing to be charged.

iWalk has a great wireless Bluetooth speaker with its Sound Angle. One of the most appealing parts of it is its unique design. This is why iWalk decided to call it the 'Sound Angle' because of its angled look - or triangular sides. 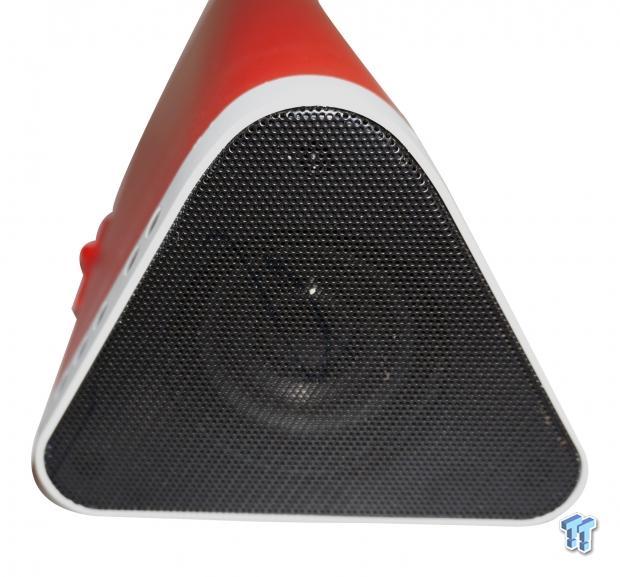 My testing with it in the outdoors really did surprise me - sure, you won't listen to intimate podcasts on it, but if you're blasting out some music, it has no problems doing so.

The battery life is actually quite good, with an average playing time of around 7-8 hours off of a full battery being great in my books. These days, portable rechargeable batteries are cheap, and I always keep one on me at all times now.

If you're after a new wireless Bluetooth-capable speaker, the iWalk Sound Angle should be high up on your list, if it isn't already. The amount of colors to choose from only adds to its alluring look. 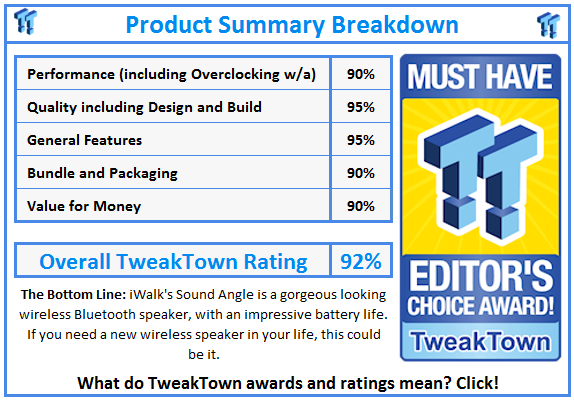