There are not a lot of samples that I really go out of my way to ask for. Most of the time a company lets us know what's on the way and ask if we want to check it out and 99% of the time we say "Sure!"

I'm doing a bit of a side grade myself from my current X58 platform to a new P67 one. There's really nothing wrong with my current i7 920, 24GB DDR3, HD 6990, X58 platform, but really, that's no excuse. One of the most important aspects for my PC, though, is the amount of RAM. Lots of editing in both pictures and video mean a fast RAID 0 setup is a must along with a bucket load of RAM. 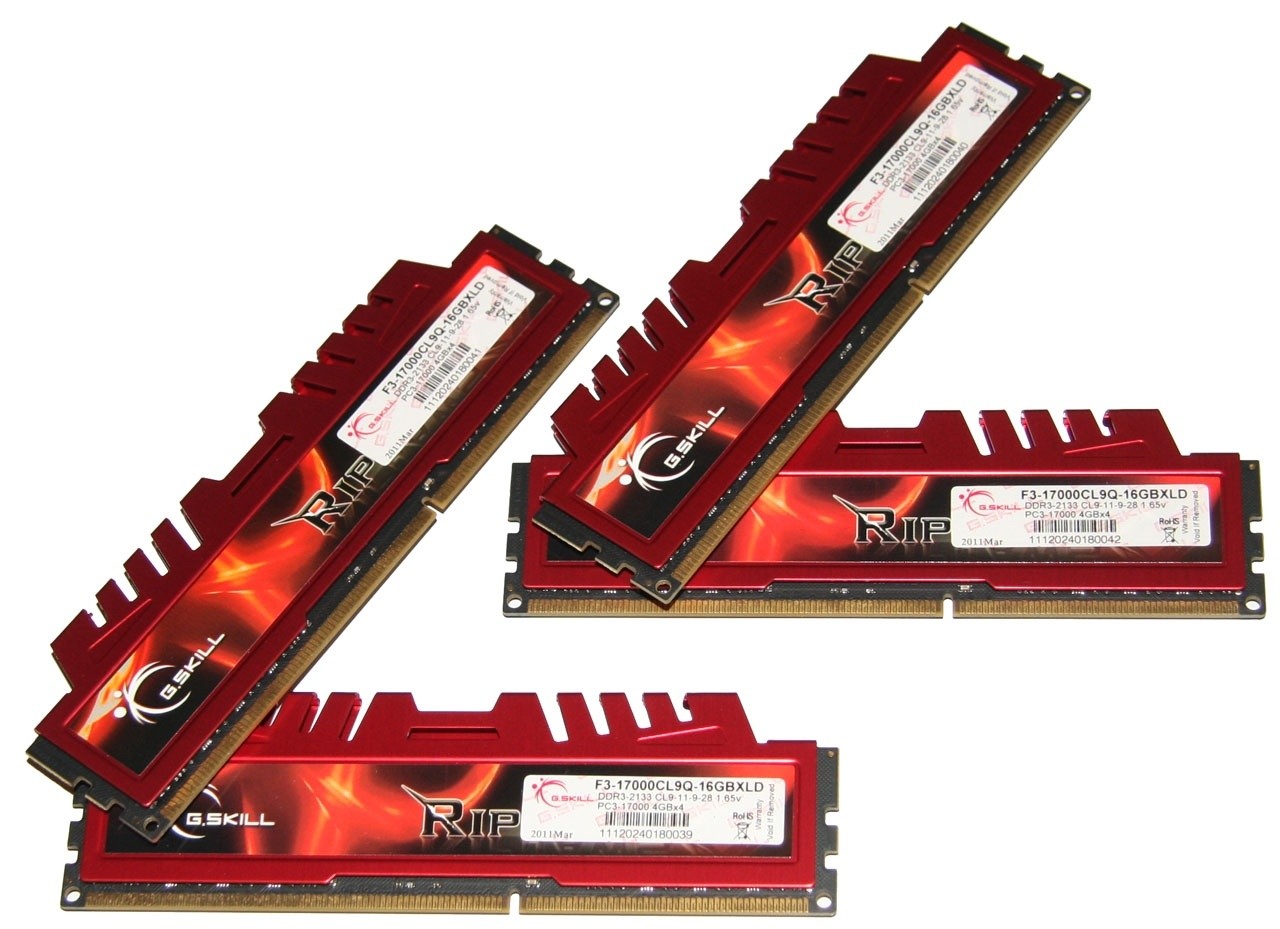 This is how I came upon organising the kit we have here today. The G.Skill Ripjaws-X PC3-17000 kit comes with four 4GB sticks carrying a default clock speed of 2133MHz DDR. I'm not all that big on overclocking my main machine, but the ease of P67 RAM overclocking means that changing the XMP Profile to 1 gives me the speeds I need without even touching my CPU speed. 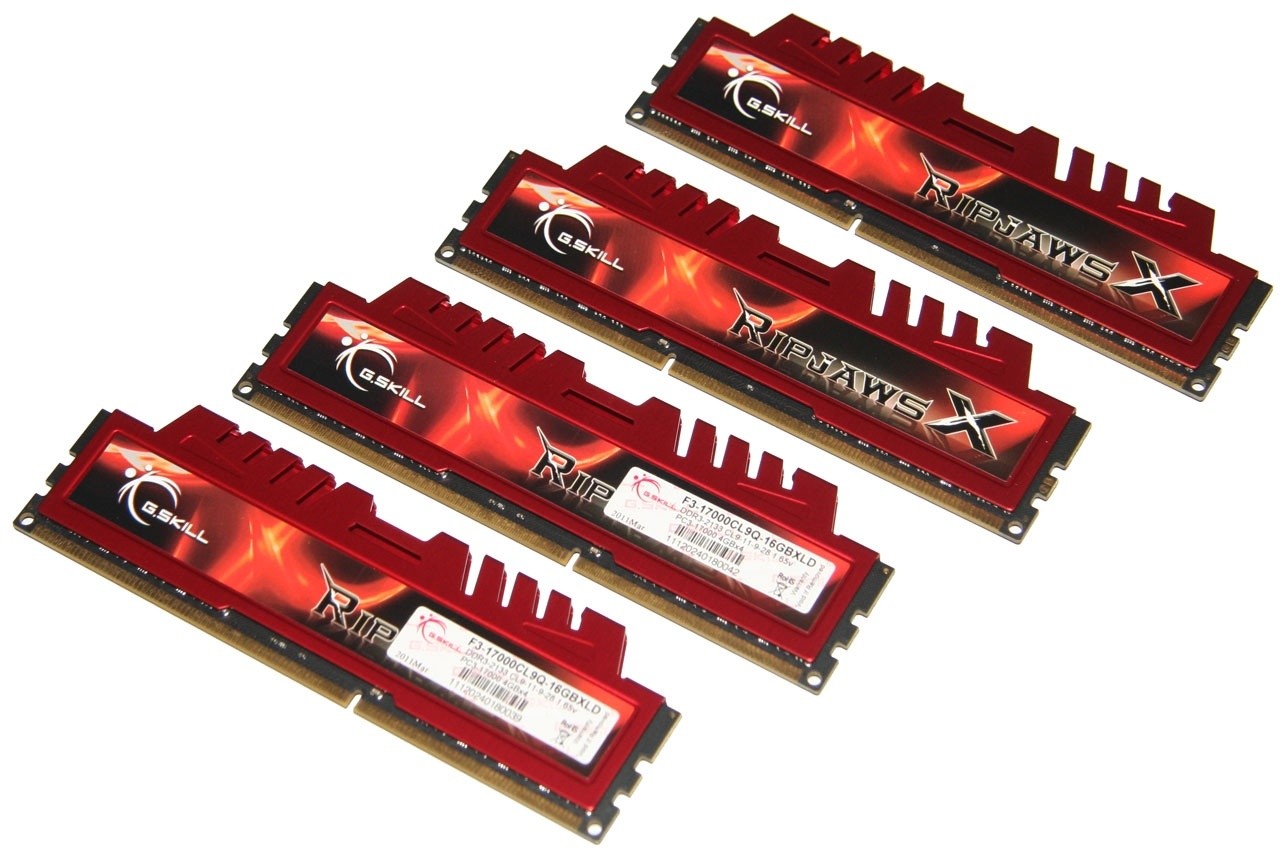 Carrying such large modules at such a large speed, it comes as little surprise that the timings are more relaxed than the black Ripjaws-X we looked at earlier in the year. The kit we've got today comes in at 9-11-9-28-2T @ 1.65v. Normally I would just ignore the 2T and jump straight to 1T, but I actually had trouble with the machine booting. 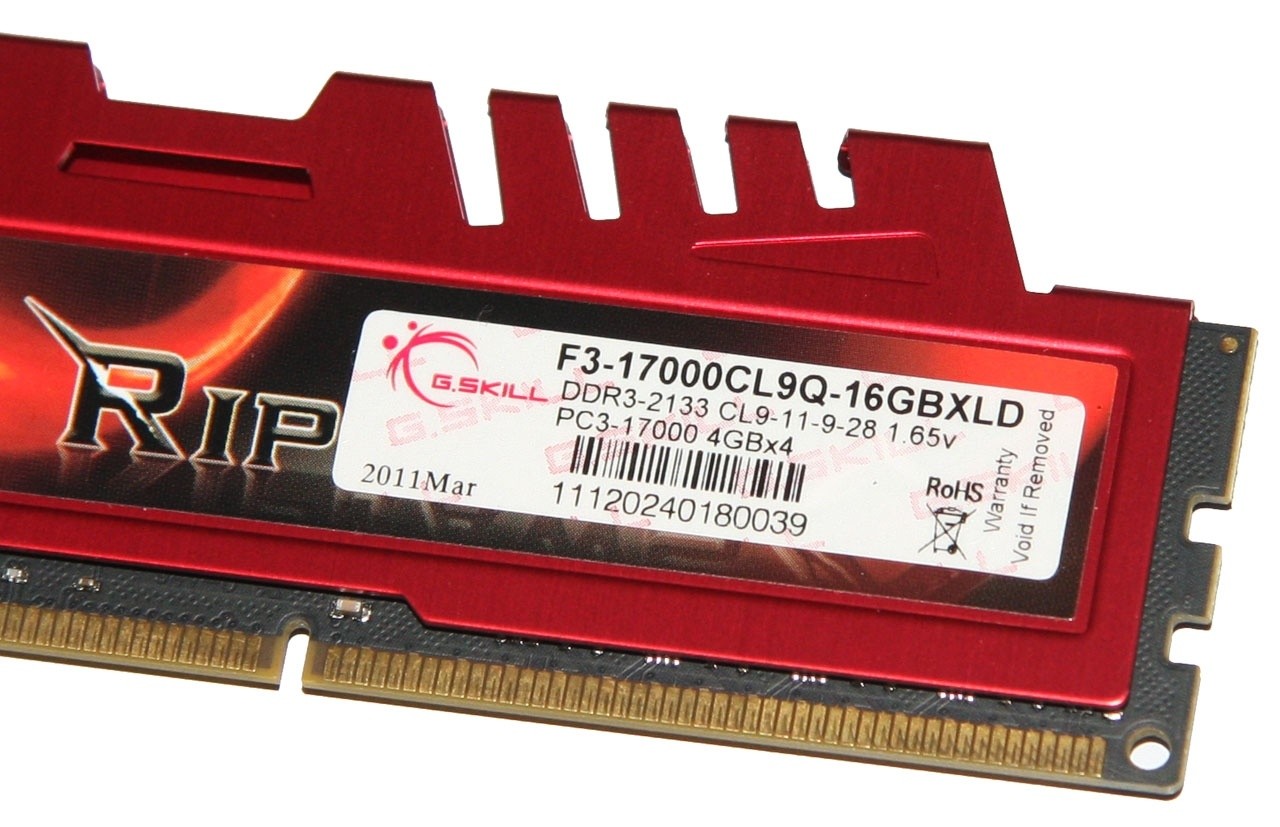 Again, being such high density modules and our motherboard having all its RAM slots filled, it really comes as no surprise. So with our motherboard trying to turn on three times and failing, the BIOS reset to defaults and fired back up. Moving to just XMP Profile 1, we fired the machine back up and of course got into Windows with no issue. You can see our CPU-Z validation here. Up and running in Windows, it was time to check out the performance we could get. 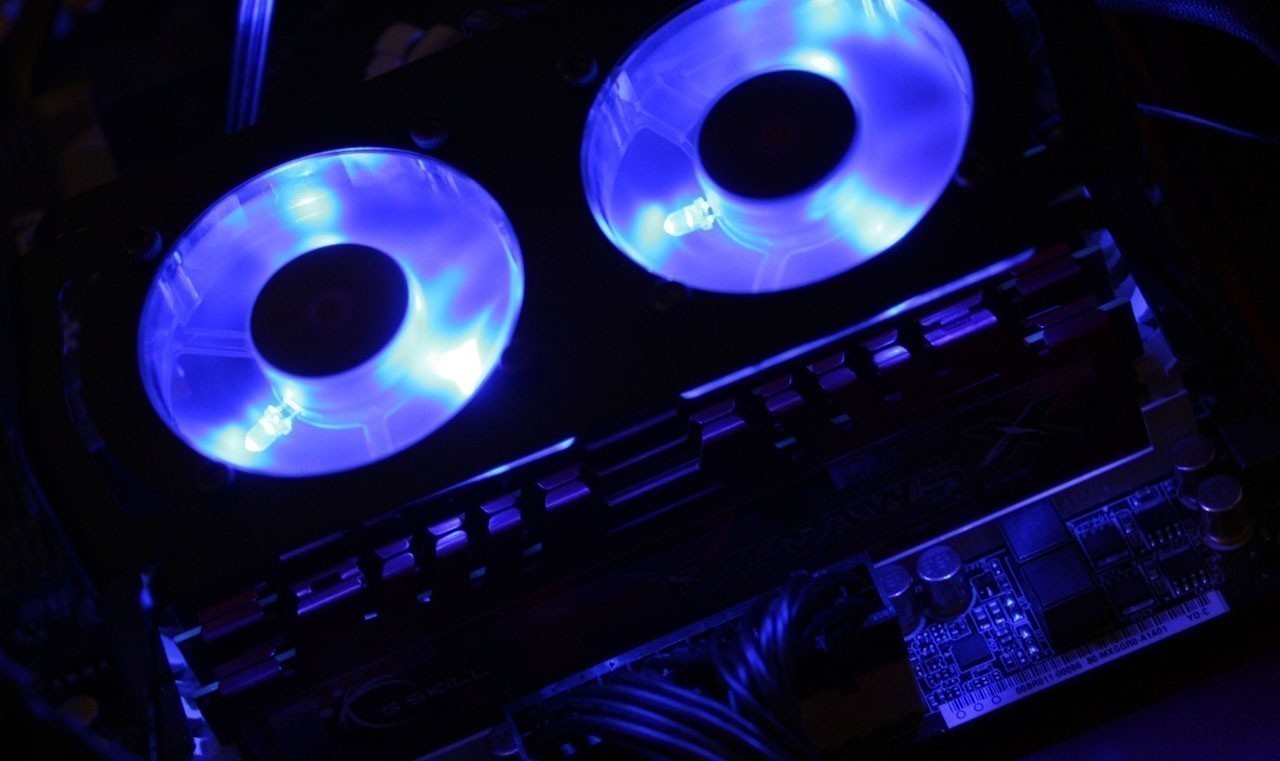 Performance was exceptional and to be honest, even better than I thought it would be. While the kit of course carries with it a massive 2133MHz DDR clock, I thought with its 9-11-9-28-2T setup it would perform a little slower than it did.

With everything running as it should, it was time to see if we could get any more speed out of the kit. With the kit being 4GB modules, all the banks being used and 1T not attainable at 2133MHz, I thought that overclocking would be quite limited and as expected, it was.

Normally we would push our BCLK up to 107.5 and see if we can get the machine booting. Knowing that just wasn't going to happen, I instead started at 105. With that not working, 104 was the next point and with that also not posting, 103 was the next option. While 103 booted, a BSOD was waiting for us at the start of Windows. With that happening, we knew that 102 would be fine and back into the BIOS and setting the BCLK to 102, Windows was all good.

While they're indeed an improvement over the first lot of numbers, they're only by a very small margin and that's of course because we're dealing with an overclock that equates to less than 50MHz DDR. For only an extra few MHz you wouldn't bother moving away from the 100 BCLK. 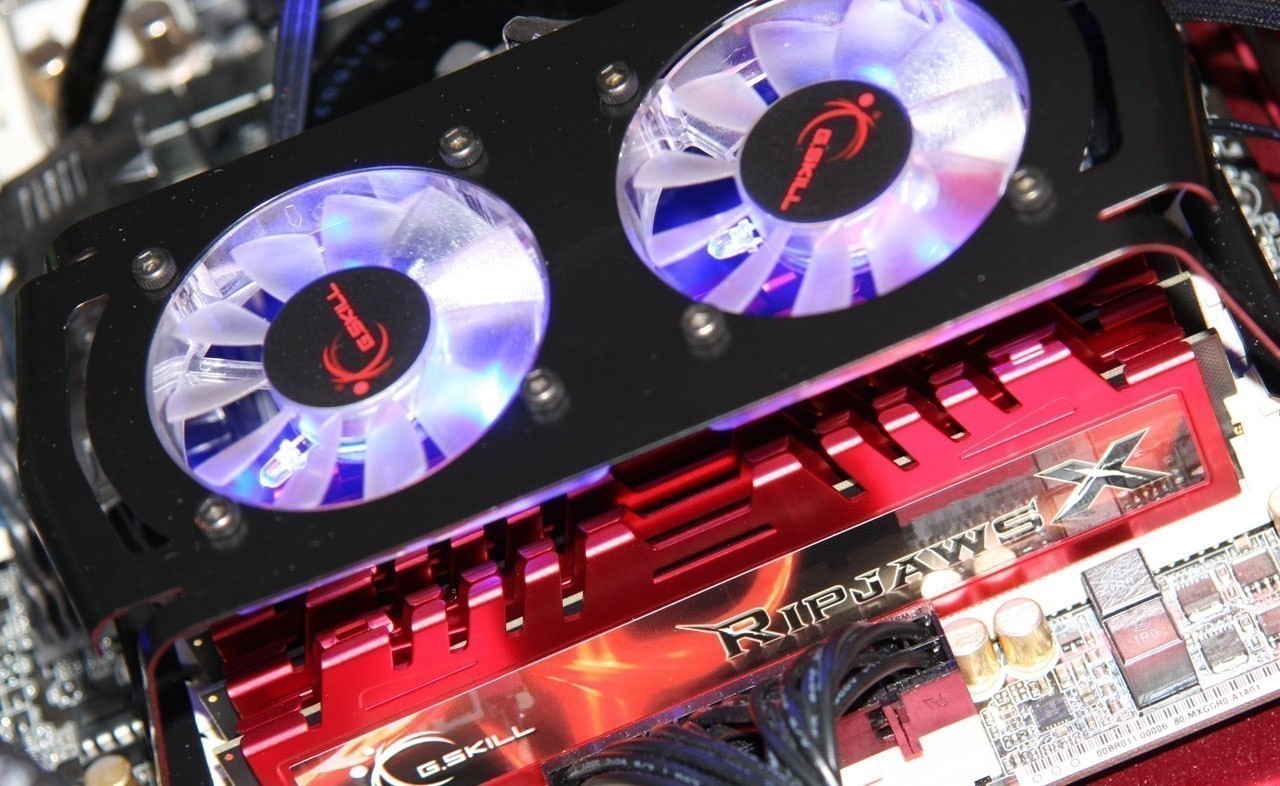 Heading back into the BIOS, we moved our BCLK back a little to 100.5 and pushed our multiplier up to 50x on the CPU. This meant that we booted into Windows at 5026MHz and our RAM ran just above stock at 2145MHz DDR. 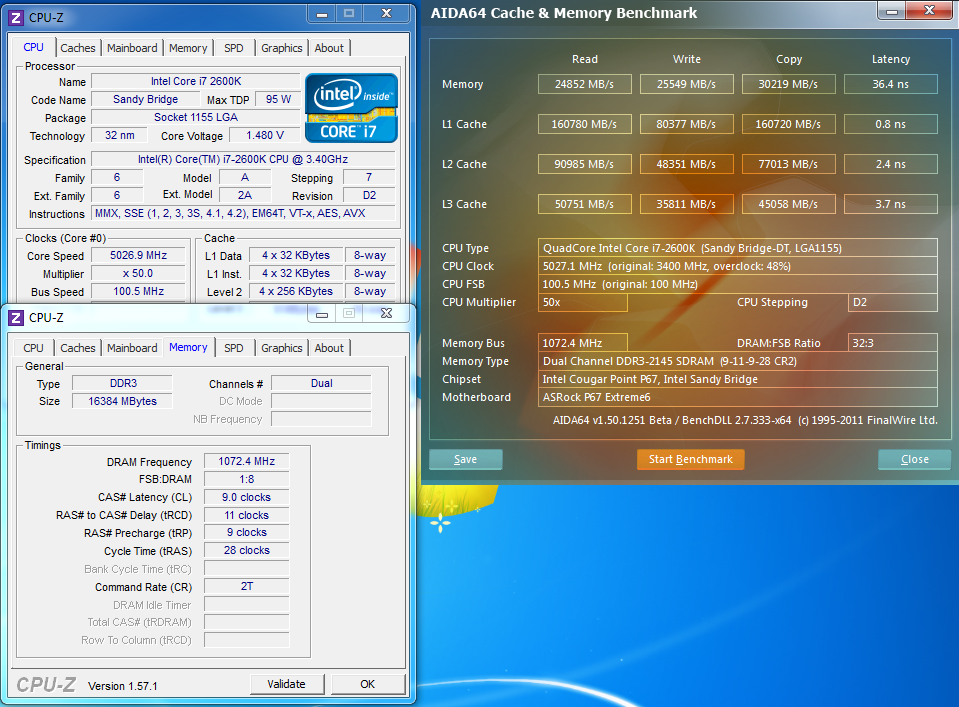 This is a strong i7 2600k and I'd feel fairly confortable running my machine at this daily. With that said, I'd probably just kick it down a notch to 4.5GHz and ease off the voltage on the CPU.

At $369.99 US the G.Skill kit we're looking at today is expensive, but is hardly a surprise considering the stock speed of them.

There's also the fact that when buying a kit like this you're able to know with confidence that all four modules will work at their rated speed versus buying two 4GB kits that might carry more aggressive timings, but do so only because two modules will be running. 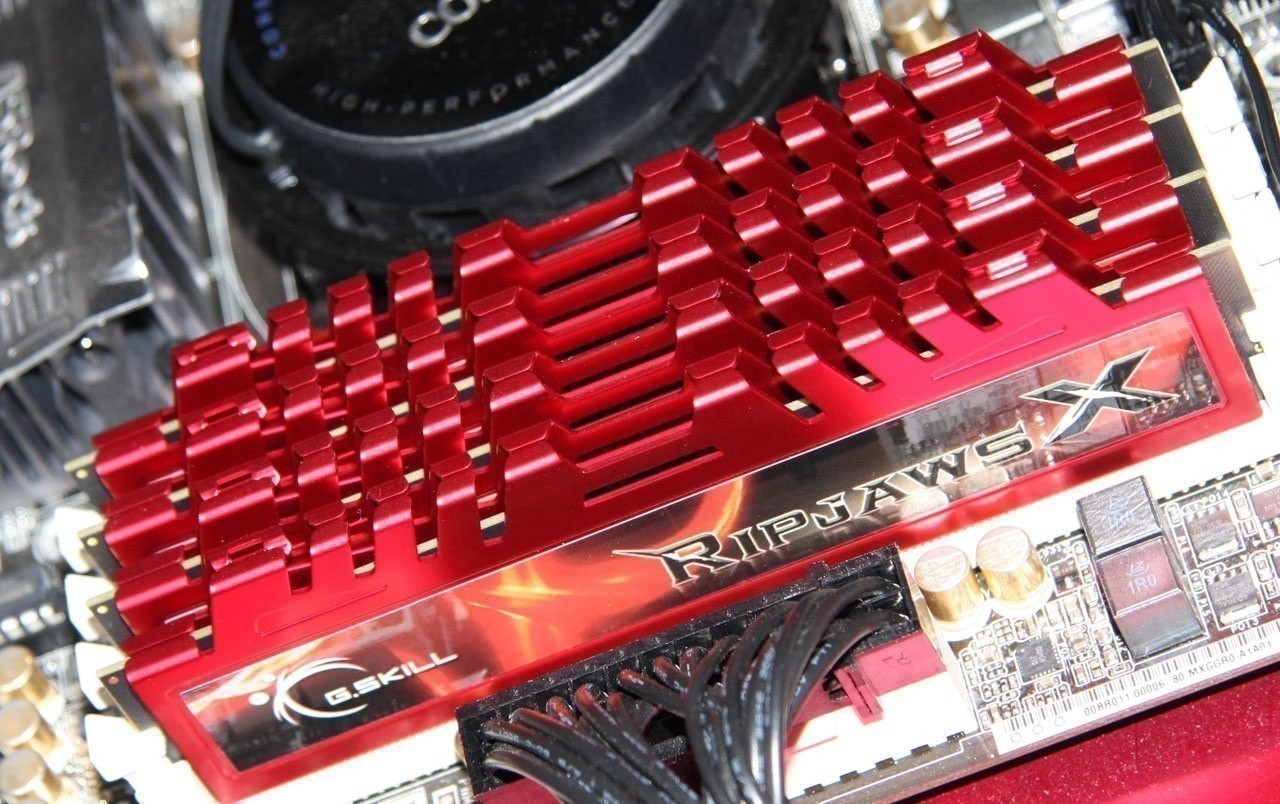 G.Skill have merged power and performance into a single kit of RAM here and for people who want to build a P67 platform and want to have not only loads of RAM, but loads of it at a fast speed, this is the kit you need to be looking at. Overclocking headroom might be limited, but you don't buy 16GB of RAM expecting to achieve CL7 and 2200MHz+ DDR. 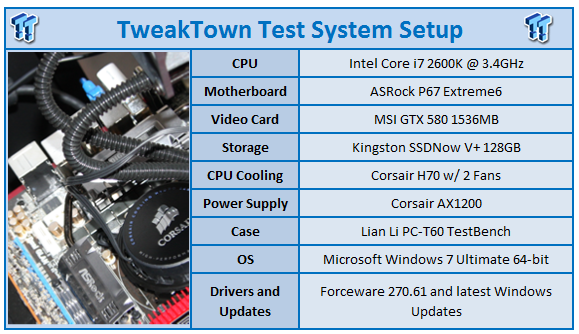