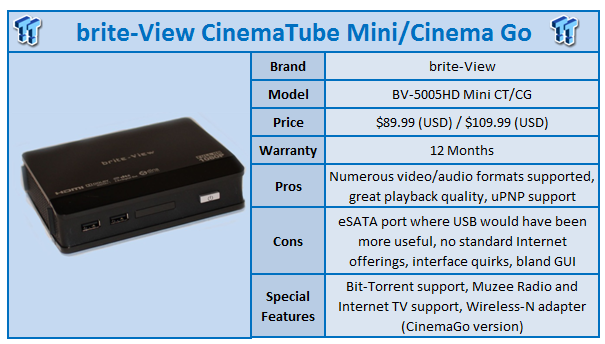 The brite-View CinemaTube Mini is media player stocked full with connections, including HDMI, composite, optical out, two USB ports, and an eSATA port. The CinemaGo variation of this device adds on a USB Wireless-N adapter.

While the CinemaTube supports the typical FAT32 and NTFS drive formats, it also has HFS+ support for you Mac users out there, though it should be noted that this support is "read-only", so some of the features of the device that require writing to an attached drive would be unavailable on those drives.

While the eSATA port is nice, it does stand out as a bit of an oddity. It seems like overkill for the kind of transfer speeds one would need to stream video off of a hard drive, as USB transfer speeds work just fine in that regard. Plugging in the Wireless-N adaptor takes up a USB port, leaving you with only one port left. It would have made more sense for the rear eSATA port to be a third USB port which you could use to plug in the wireless adapter. Not only would that have left you with two ports free (the player supports plugging in multiple drives at once), it would have also placed the adapter in the back of the unit, which would look a lot better.

The interface is very basic and devoid of any extra "oomph," though the little grayish swirls in the background shows that there was some kind of attempt to make it pretty. That's not to knock the player as a whole, as a lackluster interface is more than forgivable if it is a solid media player, but it's still something that struck me upon first booting it up. Navigation options include Video, Music, Photo, Bonus, File Copy and Setup. The "Bonus" section includes the torrent downloader, Flickr and Muzee applications (one for radio, the other for Internet TV), while the File Copy option allows you to move files around on your USB or eSATA connected hard drive.

Video and audio support is right on. The CinemaTube Mini played everything I threw at it with great quality. The only exceptions involved the APE lossless audio codec (it's not a very well-known codec, so I don't fault it for that) and a few different QuickTime files. Practically every set top player I've tried them on has choked, so I'll chalk it up to a format that is either just not compatible all around, or involves a part of the codec that manufacturers are not privy to. Even problematic MKVs that I had played through went without any hitch whatsoever, which leads me to believe that the issues I've had with them on other players is more of a codec support issue than actual problems with the encoded video information itself. A few niggles still remain, however. First, the movie preview option is nice in idea, but can be a pain when dealing with a long list of media. Selecting a video file causes the player to load that file and start playing a preview which freezes the interface for a second or two. Thankfully, it can be turned off under the Setup menu. 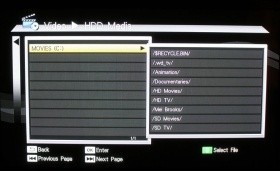 If you stop a video and then play it later on, a prompt to appear asking you if you want to continue from where you left off occurs. While this is great and all, if you skip to the previous or next file in the list instead of hitting the "stop" button on the remote, then returning to that video doesn't give you the same option. This is really annoying if you accidently switched to the next or previous video in the list, which can happen if you confuse the skip buttons with the fast forward or rewind buttons.


Outside of the solid media playback, the CinemaTube Mini offers Internet connectivity via Muzee. Both radio and TV services are provided, but the TV service is clearly marked as "beta" and it's definitely not as solid as the radio streaming. Most of the channels are from Europe and Asia (with the occasional Middle East broadcast thrown in), and can take upwards of two minutes to load up. Image quality was usually poor and I experienced a lot of audio dropouts while viewing. There's a "Parental Control" option provided which adds two "adult" entries to the genre listing to appear. The first of these was devoid of content, but the other had three channels.

I tried two of them, but the only kind of "adult" material that I saw was if you consider "adult" to be the kind of shows that children would find utterly boring. The first channel I tried was some kind of art program where a host was expounding on a landscape painting. The other was some kind of "Around the World in 60 Seconds"-type news show. Nothing I saw was being spoken in the English language, so perhaps there was a lot of profanity or something, but otherwise they seemed pretty benign to me.

The Muzee radio works pretty well, and is definitely much faster to load than the Internet TV. The interface is akin to iTunes Radio, which is to say functional, but not very elegant and involves navigating through lists to find the station you want. Like the Internet TV, a lot of these stations are places in the world other than the U.S., which works out better as music is pretty universal. 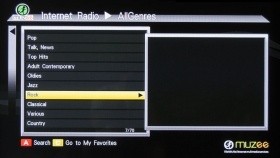 The bit torrent client is a novelty of sorts that you don't see touted in many players; probably because most manufacturers would like to steer clear of any hint of impropriety on their part. Frankly, it's not that convenient because there's no built in torrent searching. You still have to have a computer to log on to a (legal) torrent sharing site and download the torrents to a flash drive (or share them across the network) to load into the CinemaTube Mini. Thankfully, the player can download torrents in the background (though it notifies you that it may affect the performance of the unit), so you're not stuck watching a progress bar the entire time. Just make sure that whatever device you are saving the downloaded torrents to stays connected.

I downloaded a few video files from ClearBits.com, and the resulting media played without issue on the player. Completed torrents are removed entirely from the main list display, which requires that you navigate to the "Complete" menu item at the bottom of the screen to see what torrents have been downloaded. The interface also gives off the illusion that you could play the video file you've downloaded straight from the "Completed" section (which would have been very convenient), but you cannot. You still have to go back to the Home menu screen, then to "Videos" and navigate through the folders on your storage device to actually play the file. 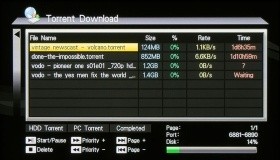 Frankly, I would have rather had Netflix and Pandora than Muzee or even the bit torrent capability. There's not really that much difference in downloading the files from the CinemaTube Mini as opposed to your PC, and the Muzee options are very limited in the amount of media that you could actually consume (especially if you're a primarily English speaking U.S. resident). That said, if you're not concerned with Internet connectivity options, and merely want a no-frills media player that will do a great job with whatever you plan to throw at it (save for some of those pesky QuickTime files), then you could do worse than to consider brite-View's CinemaTube Mini.