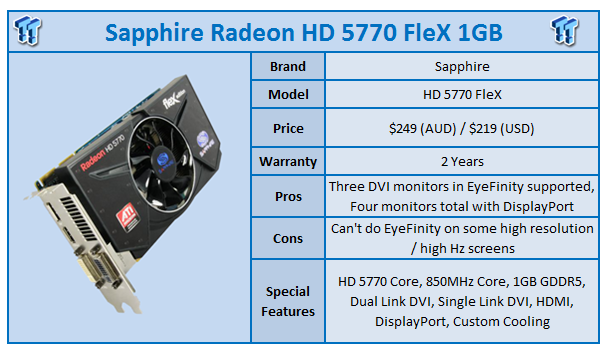 When we started the quick review section it was never our intention to review any hardware in it. Rules are made to be broken, though, and due to the way we want to look at the Sapphire HD 5770 FleX, looking at it in this style is the best way.

The big news behind the Sapphire HD 5770 FleX is not that it can support four monitors off a single card, instead it's the fact it can support three monitors without the need to be using a DisplayPort connector; something that has been a must for users wanting to make use of Eyefinity. 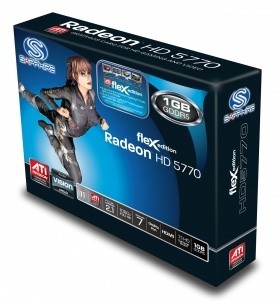 Before we get into heaps of detail on how Sapphire is doing all this, let's just have a quick look at the package. Inside we've got a few things including the standard CD and manual. There's also a little leaflet about joining the Sapphire Select Club and the benefits it gives you. In the cable department there's some normal looking cables like a Molex to 6-Pin PCI-E power connector, DVI to VGA connector and CrossFire bridge. Something else included of particular interest is a HDMI to DVI connector. We'll talk about this a little more in just a moment.

As for the actual card itself, we're dealing with a HD 5770 running the core at the stock 850MHz and 1GB of GDDR5 memory also running at the stock reference speed of 4800MHz QDR. 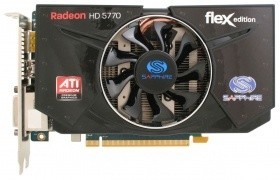 The card itself uses a different cooler that looks pretty mean and will no doubt do the job. Being a HD 5770 we've got a single 6-Pin PCI-E power connector at the back of the card and across the top we've got two CrossFire connectors.

What's the difference then? - Single-Link doesn't support higher resolution screens like the Dell 27" and Dell 30" which offer resolutions of 2560 x 1440 and 2560 x 1600 respectively. Also not supported are screens that offer 120Hz, like the Alienware AW2310 for instance. What is supported, though, is pretty much every 1920 x 1200 and lower screen on the market, with the exception of those few 120Hz 3D Vision compatible ones.

It's all a little confusing, but here's some configurations you could run; three DVI monitors of 1920 x 1200 60Hz or lower with the help of the DVI to HDMI adapter included in the bundle would be one. You could also run three of the same monitors without the adapter, with one instead being connected via HDMI. This is all done while making use of "Eyefinity" which is separate to just having three monitors in span mode, something that could be done before. With this setup you could have three monitors and game at 5760 x 1200 in games, as you'll have that resolution option.

Now, this is all great, but let me talk about my issues with it. The first is that you couldn't run three 120Hz or ultra high resolution 2560 displays off the card due to the fact we've only got two connectors that support that resolution; the single Dual-Link DVI connector and DisplayPort one.

Secondly, I've said for a long time that ATI should be pushing the productivity side of things more then the gaming side when it comes to Eyefinity. My issue with what Sapphire has done is they've essentially placed a technology which is heavily promoted to gamers on a card that couldn't game at these massive native resolutions that Eyefinity brings with it. Personally, I feel we should be looking at a HD 5870 FleX or HD 5970 FleX and not a HD 5770.

In the event that you don't want to game and instead you want to use the technology for productivity, surely the setup could've been done on a slightly cheaper card like the HD 5750. My understanding is that below that any more than three displays isn't possible.

As a product, the HD 5770 FleX feels like it's missed the mark. As a technology, though, it's hit the spot perfectly. My concern is that Sapphire will decide if they will promote the FleX more heavily depending on the sales of this model. Since you've completely missed gamers who are the ones that are going to talk about it, I fear that we're not going to see it get past this stage.

With all that aside, the HD 5770 FleX is ultimately a very good product if you're running three DVI monitors already, don't really game and want to ditch a poor software solution multiple card setup that you're currently running.