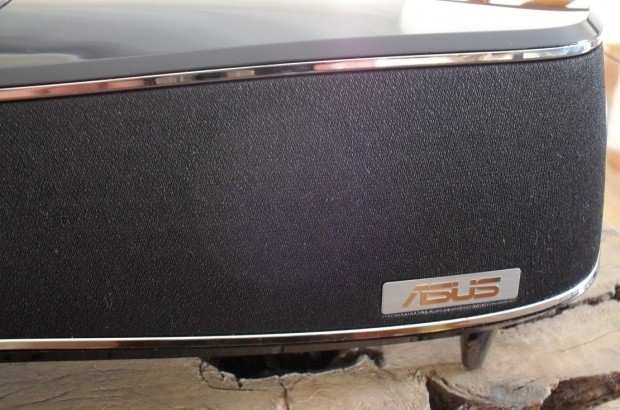 Whether we like it or not, space is not becoming a premium, it has become one. Naturally then, we are seeing more devices/systems catering to a market share with more dollars than space. And with such limitations becoming the norm, exploiting the limited amount of space on offer in the average office has become the motif operandi of many companies looking to be current and fresh in the public eye.

The debate over whether or not this trend will result in an actual increase in overall sound quality is alive and well, as it should be. Naturally the audio die hards will be shuddering with timely distain when discussion turns to the notion of putting surround sound in 'another all-in-one' solution.

But there must be some fence sitting to be done in all of this, surely. Why can't there be a middle ground between the old stock ideology and a constantly changing industry? - Wherein technology and daily life cuddle up together like the best of friends.

Not everyone has the space, time, cash, nor want for a dedicated theatre in their home. And yet, the purists claim it to be the only way to audio bliss. So, what do ASUS have to offer to this scenario? - What they have just built is the worlds most compact surround system of its kind, housed inside a single enclosure.

This is the Cine5; we break it down today on the test bench. 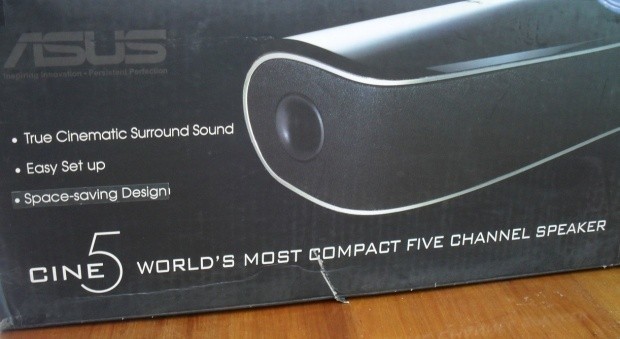 Now that we know what we are dealing with, let's take a closer look at the package and contents and see what's included.

The Cine5 is packaged much like any other stylish and sleek ASUS product to date. 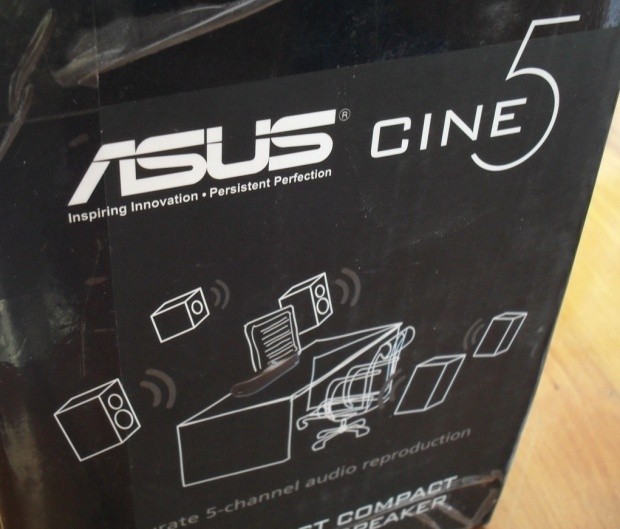 This particular design captures the interest of a wandering eye quite well, with a flat black background being met with some bright text, exclaiming unbridled potential within. 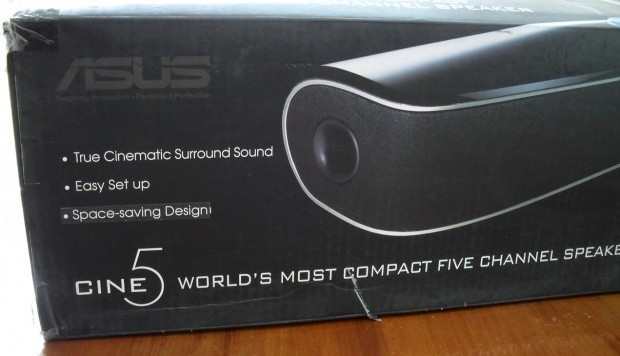 The front of the package makes the stern claim that this product is indeed the most compact speaker of its kind in the world. And accordingly, must be met with appropriate raptures by the techno savvy masses. We think so anyway. 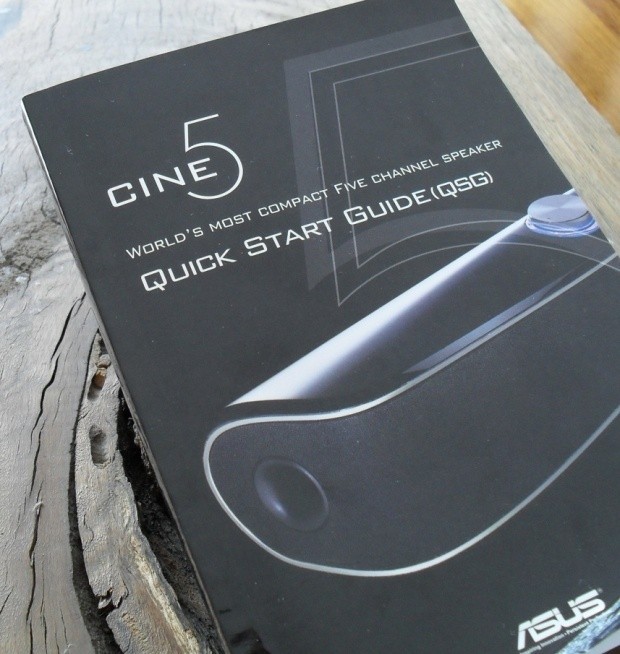 Inside the stealthy black packaging can be found the glisteningly shinny Cine5. Now, our first reaction to the stature of the Cine5 was how small it is.

The size of the package and the image on the front of said package both lead an unsuspecting individual to imagine that inside may be found a speaker of reasonable girth. 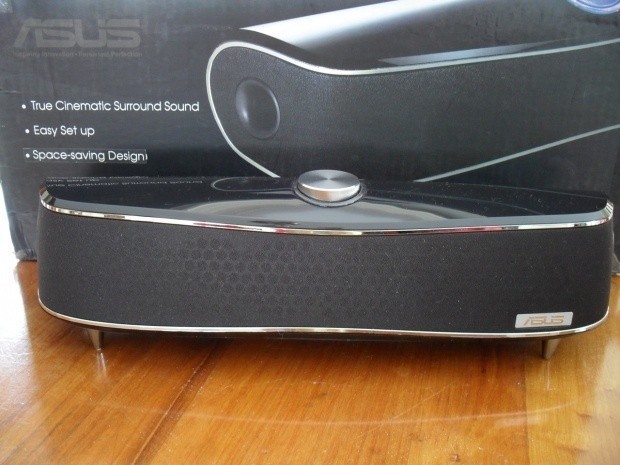 This is not the case at all. In fact, the Cine5 is indeed, very compact, as stated clearly.

Before we get to all of that, though, the space underneath the Cine5 is occupied by some documentation, some necessary cables and a good deal of foam to boot. 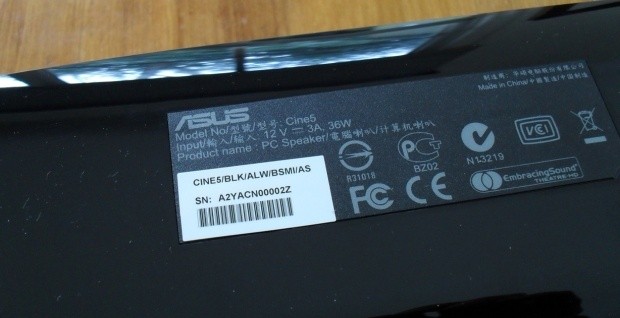 Taking a closer run through the specifications now and things appear to look pretty much how they should. One small area of concern, though, is the low end of the frequency response. According to ASUS, the Cine5 is only capable of reaching down to 80Hz, which basically presents itself as a limiting factor from day one.

Do not get me wrong, 80Hz is certainly bass and anything below 100Hz is considered low(ish). But that's a little bit like saying that sleet is really like snow and that any cold day has the potential for a white out, if you catch my drift.

Now, this is precisely the peril faced when designing these types of SoundBar systems. One quick solution would be to have a line out for the later connection of a subwoofer, which certainly does not hurt and would not affect any part of the core design structure. 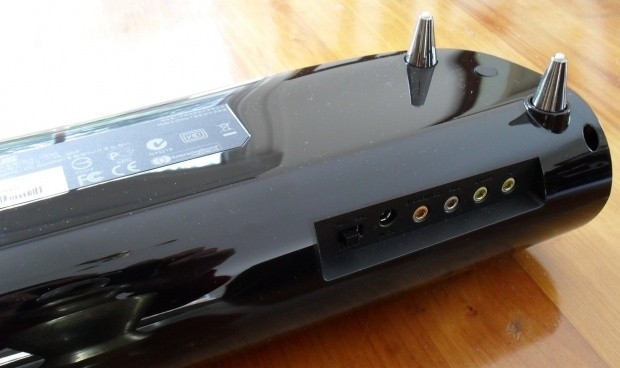 We do, however, understand the obstacles that designers face when meeting physics head on and attempting to circumvent it with a sure fire design. The point is that niggling battle between form and function which continues to flare up all over the place.

Overall power figures for the Cine5 are given at 15watts RMS, which is modest, but honest. It should be enough to provide what is, in reality, quite a small unit, with power. 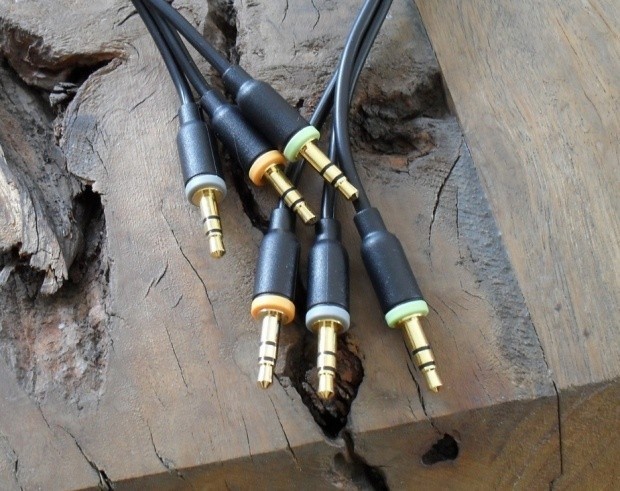 When it comes to connecting the Cine5, the system comes equipped with three stereo mini-jack sockets only and is not provided with a digital option.

Nothing too serious here aside from the minor foible of not really providing any deep bass output.

The Cine5 is not an overly complex beast and should not provide any substantial difficulties when being set up. 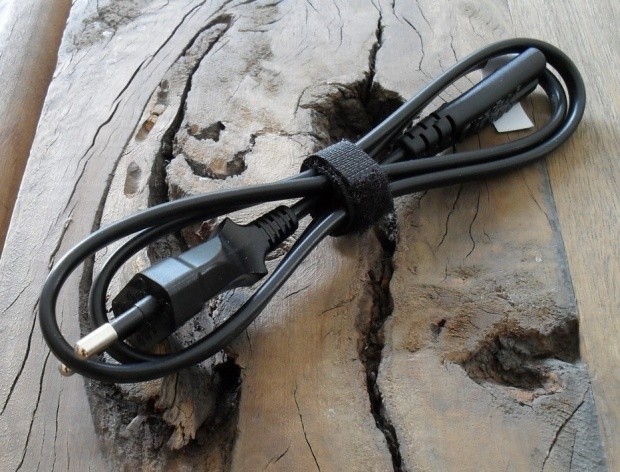 The controls for the system are a fairly simple affair, so there really isn't need for any calibration to be done when setting up. But it's probably a good idea to set your Windows volume level and/or soundcard volume to about 85% and then use the Cine5 control to act as your master dial.

This will just save a bit of messing around with juggling more than one control at a time. Also, be sure that your soundcard is set to 5.1 to avoid confusion.

It's been said that first impressions can and do leave an indelible impression. 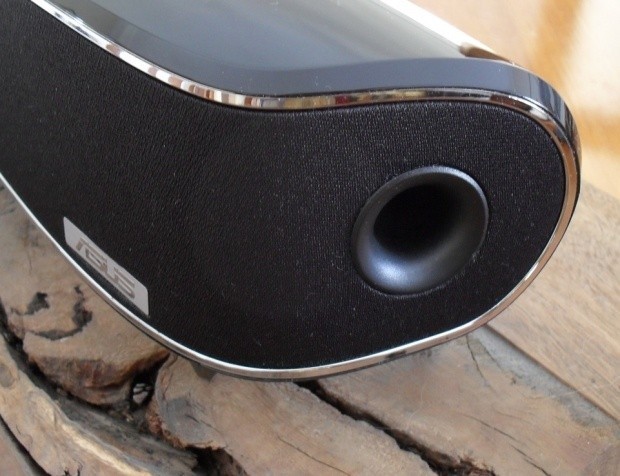 That being said, the Cine5 made a strong one after its first run out of the box. Initially, the high end had a nice presence in the large room used for the systems first listen, providing a pleasant amount of treble to the mix without being too over the top.

We were also initially impressed by how well the Cine5 filled a big room with music. Casual music listening is up-mixed through the Cine5 to allow all of the systems speakers to be used at once.

As mentioned previously, the Cine5 uses full range drivers, so things are a little lacking from day one from a pure listening standpoint. However, it's not all bad because certain types of music (slower acoustic for example) sound great in the high-stakes department. It's more a case of things becoming harsh and lost in this department with certain types of music. 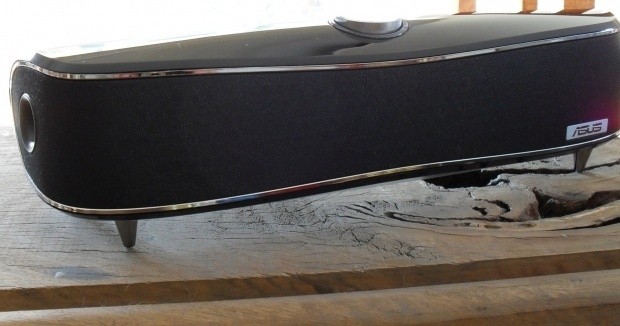 Due to the mid-sized drivers chosen for the Cine5, mid range should be quite respectable and is for the most part.

There are good quantities of reasonably well balanced mid bass coming out of the unit. Although, again we must stress how much the performance varies with different types of music.

We have already covered this, so let's make things brief here. It really comes down to what is being played back. Heavy gaming and music breaks up the low end badly. However, basic FX and most mid bass will come through well. 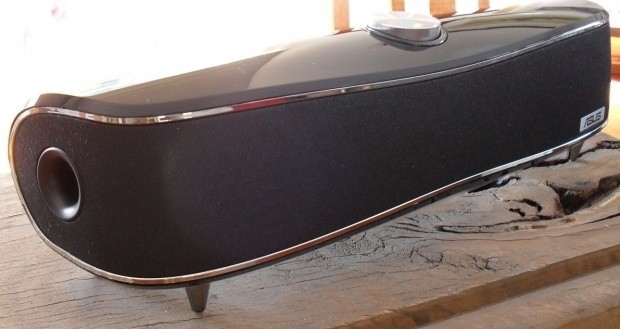 Gaming is an enjoyable experience through the Cine5 because of the well rounded and predictable nature of the sound being produced by the unit. However, to touch again on a previous point, the low end is going to be an issue for gaming and unfortunately will span across a wide range of games, because if experience teaches anything, game designers love throwing in dollops of deep bass into their games. 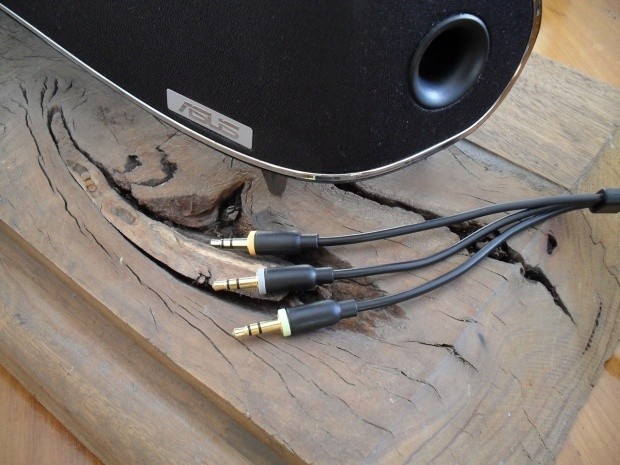 The solution of providing gamers with surround sound built into a single speaker is one with a good amount of merit. It's just an issue of really catering to those specific needs such as low end response that gamers cry out for.

Overall, though, this is a good little unit if kept within its scope of performance. It should provide casual gamers with enough to keep them happy as well as casual music and movie consumers.

We must use the word 'casual' here, though, because it describes exactly the ethos behind the Cine5; which is a 'complete experience' for the casual user.

Surround performance is acceptable during testing, providing a sense of being in a dedicated surround environment most of time.

It's going to be interesting to track what happens in this bracket in the near future. Especially given there are other companies releasing very impressive wireless systems next month, which look almost the same as the Cine5 to boot.

The Cine5 is a great product in many ways, with strong listening results in several forms of testing. However, with an analog interface only, it must be said that the Cine5 has been designed for the market of yesterday. This will be seen when the latest high-spec wireless systems hit our shores in the coming weeks.

We also feel that if ASUS had provided the Cine5 with a simple digital connection or even USB, that expectation and overall implementation of the unit in an office environment would be better than it currently is.
With that said, we feel also that having the Cine5 running in the background as a basic music or gaming system is a great proposition. Due to its compact size and simple design, it just keeps things in perspective when listening.

To conclude, the Cine5 does everything it sets out to do with a decent standard of performance. It would have being great, though, if that performance could have been combined with a connection interface that more closely reflects where we are at with technology right now.