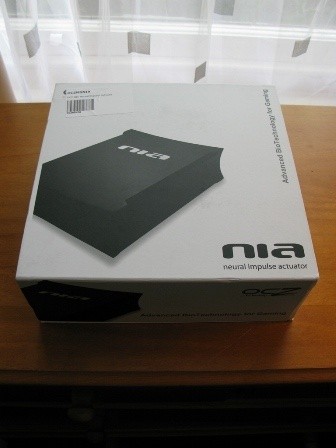 Now they have decided that anybody can release a mouse and keyboard and instead their top engineers have come up with a completely revolutionary input device - the Neural impulse Actuator (or NIA for short).

By harnessing the power of your facial muscles, you can substitute keyboard and joystick controls in-game and free up your left hand for other key combinations. 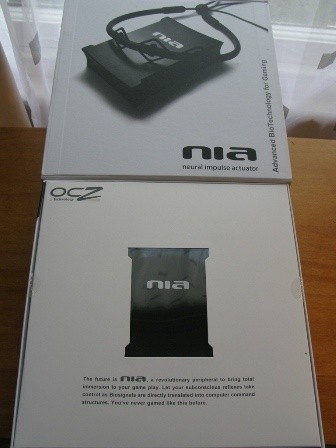 The device itself is designed to be used in conjunction with a mouse when playing FPS or RPGs in order to take advantage of what OCZ describe as "reflex-based game play" which can enhance your performance by up to 50%.

In the box we get drivers, a cable, the headband and signal filter box, all packaged neatly in foam to prevent damage which really reflects the quality of the device along with the one piece black anodised aluminium filter box. 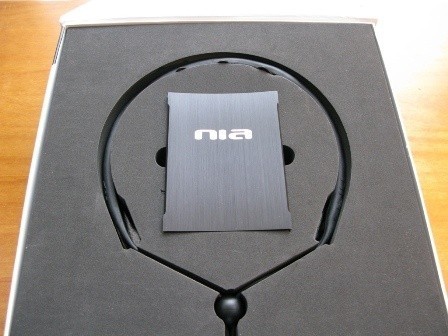 The filter box itself is powered from the USB port and doesn't involve any excessive cabling, which is a nice touch seeing as most electronics are 5volts as standard. The headband is a black rubber affair, with nanofiber based electrodes that sit snug against the skin to measure your bio-electric signals; providing the input method for the device.

Before I get into the testing of the product, I would like to say a big thank you to OCZ for releasing 64-bit drivers for the device. More manufacturers need to wake up and realise that the era of 32-bit OS's is almost dead and it's time to move up to 64-bit.

Installing the available x64 drivers from OCZ's website will load you up with their calibration suite and drivers so that you can connect your NIA up to your PC. This is where the fun begins. 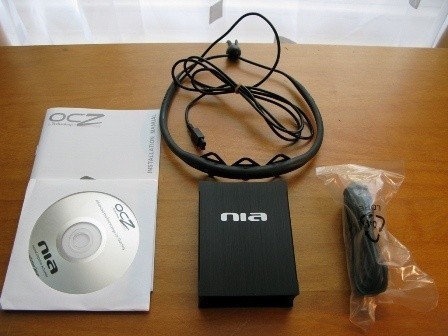 Plugging in your headset and strapping it on is simple and comfortable; just follow the included instructional video in the setup screens to ensure a snug fit and optimum positioning. 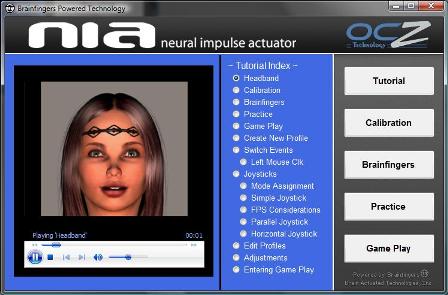 When the software asks you to get your 'brain-wave' down to the green line, it can seem almost utterly impossible as it jerks about at the top of the graph. This is because of localised Electro-Magnetic interference caused by items such as cell phone chargers and other power-brick devices. 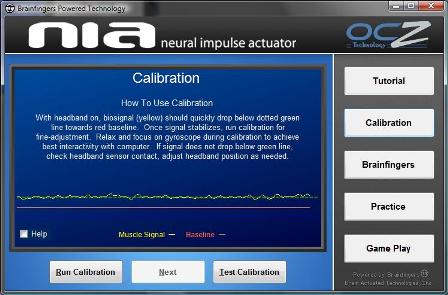 You will notice if you touch your hand to the case of the filter, it brings your 'brain-wave' right down to the desired level, or at least, it should. But if you are still getting a large amount of interference then you will have to go on a hunt for the noise maker.

Playing Pong With Your Mind

Once you have calibrated your device then you can begin training to use the functions under the practice mode. It is useful to know at this point that the trigger actions that will work best for the NIA are moving your eyes left to right, like you would for a shifty glance, whilst also clenching your jaw tightly. 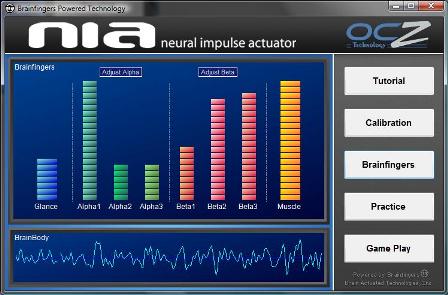 The practice game makes use of the retro classic, Pong, to train your jaw muscle movement. For the eyes, it is best to use the tweaking tools under the profile wizard to set the trigger boundaries. 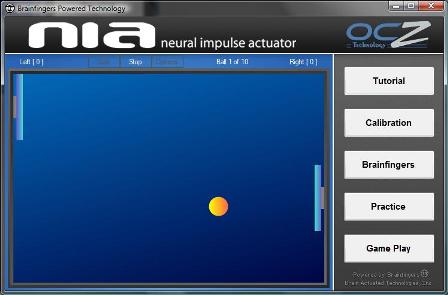 The NIA software will then map your responses into key-presses to use in-game. There are several default setups you can choose from and even a couple of downloadable ones from the official website, but you will want to spend some time calibrating and tweaking it to your preferences. 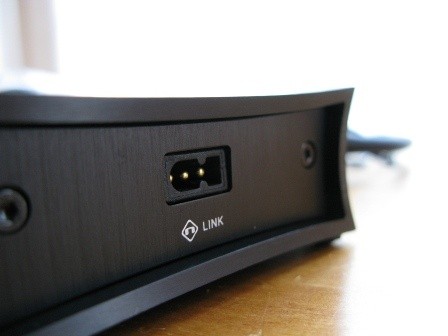 With the device set up, there is little to do now but test it in game!

Firstly, I will give it a sandbox test under Gary's Mod, a Half Life 2 add on, so that I can get used to running around and shooting things with the headset on.

Well, that works quite nicely, though it seems a bit less intuitive at first when compared to using keys. It will take some playing around with to get comfortable using the device. 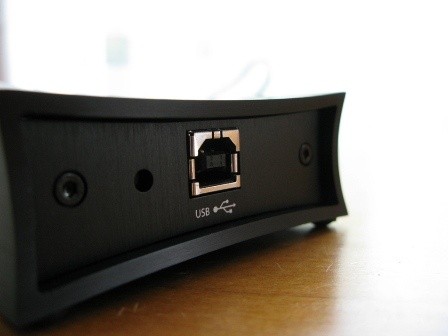 Getting it on some Team Fortress 2 action was a little more tricky, but there's nothing like getting your ass handed to you to make you learn quicker!

It's apparent that getting used to this new control method will take time and lots of practice and I can see that only the hard core gamers and geeks will put in the effort to make it worthwhile. People want a device that is easy enough to pick up and master in a matter of hours, at most; the wii-mote as a successful example.

Gurn your way to the top

The unfortunate side effect of using the NIA is the complete fool you will make of yourself if anyone is watching. This thing will have you pulling all sorts of odd faces just to get the right responses.

Being a respectable media contributor and a professional, I invited my friends over so I could laugh at them trying it. 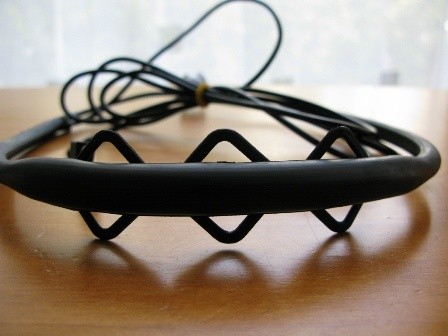 Their opinions were ranging, with some finding it easy to get used to and some who just couldn't work it out; and one person who had some strange bodily generated electrostatic field that just messed with the readings no matter what, so we couldn't make it work for them.

All the while, it is important to maintain the perspective that this technology is in its relative infancy for a commercial product. Concepts rarely supersede each other overnight and take time to come to maturity. 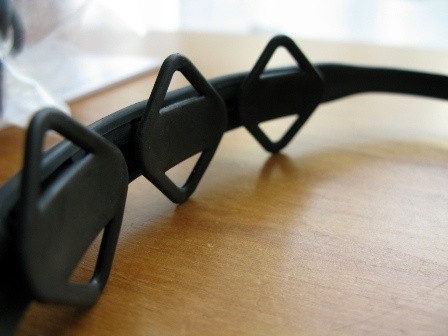 A bit of searching reveals that this unit is currently on sale at Newegg for 79.99 USD after a mail-in rebate, so there is no excuse not to try one if you have the readies.

We are entering a new era of human machine interaction and Myo-electric control is certainly on the cards as a viable solution. For those who want to get in early on a piece of technology that works and is affordable, I can recommend an NIA to you. Just be prepared to spend time using it to get the most out of it. 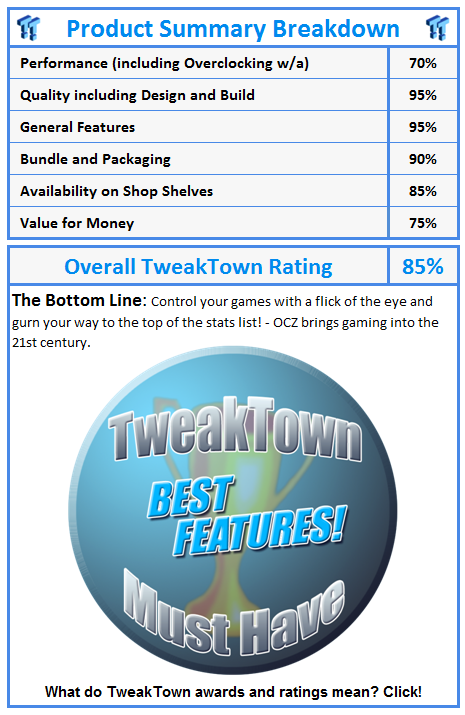